Frank Andre Soma, 43, is more than a wolf handler. He’s the alpha male who leads the pack.

Frank was my friendly guide at Langedrag Nature Park in the snowy countryside of Tunhovd, a three-hour drive north west of Oslo.

He’s been a predator specialist for 21 years and also works with bears, lynx and Arctic foxes.

On a freezing Norwegian morning I trudged through the snow with Frank to a wolf enclosure, excited to see the beasts for myself.

Frank Andre Soma has been a predator specialist for 21 years. He’s pictured here with wolves at Langedrag Nature Park in the snowy countryside of Tunhovd 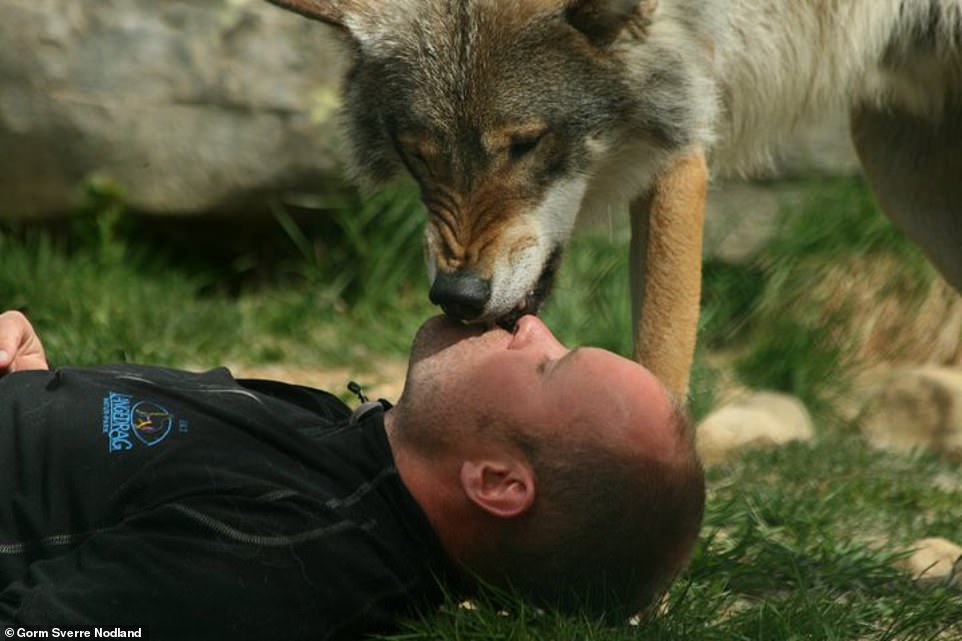 Mouth to mouth: A wolf eats a meatball out of Frank’s mouth without leaving a scratch at Langedrag Nature Park. Frank raised the wolves since they were pups and needed constant care. He slept with them to keep them warm and fed them every three hours 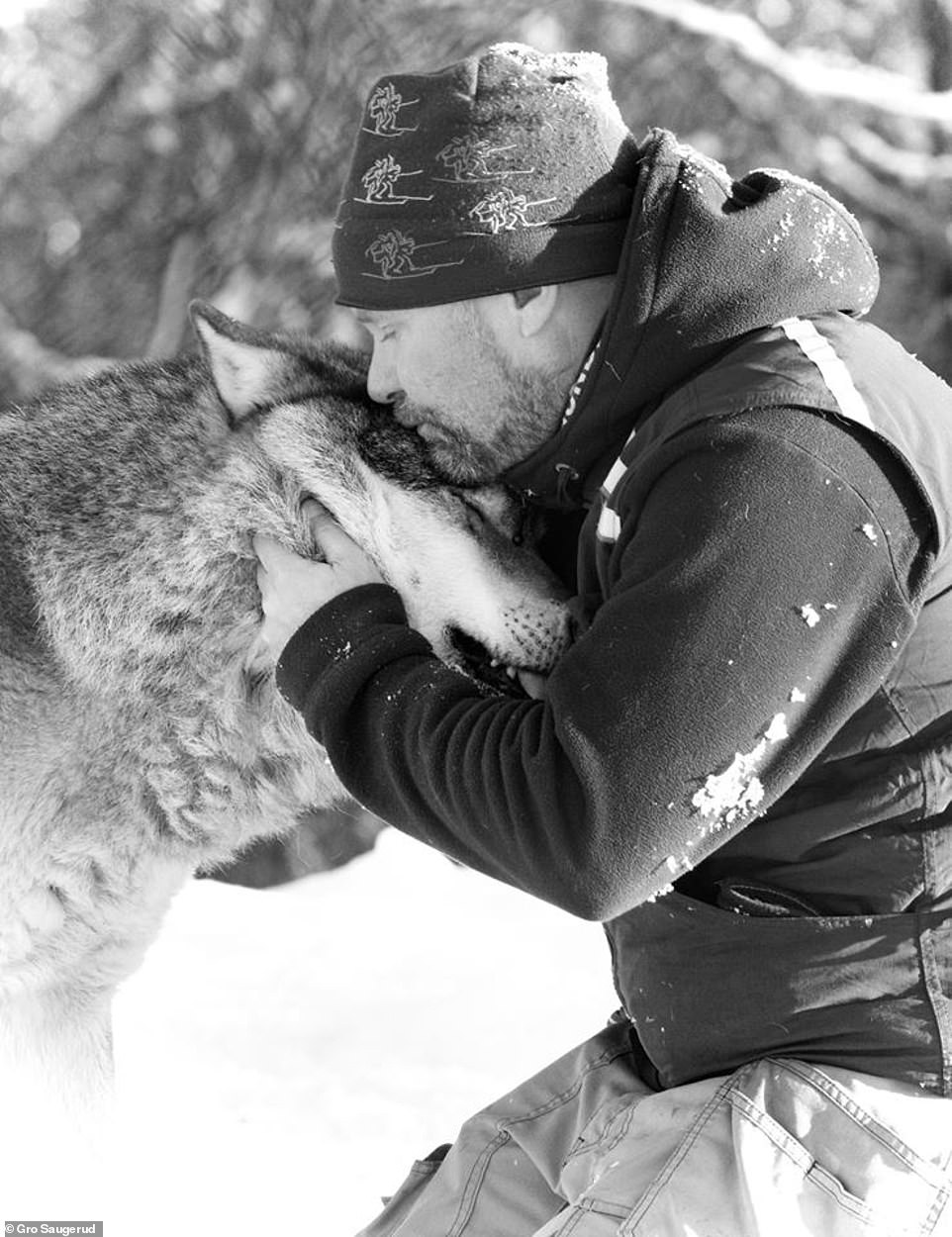 ‘I feel so lucky to have a relationship with these amazing animals and see them everyday,’ Frank said. He shares a tender moment with a wolf from his pack at Langedrag Nature Park

Frank casually entered the wolf enclosure with nothing but a tray of meat.

Two grey wolves named Varg and Irgas gracefully slinked through the snow to Frank and looked at him like they had known him since they were born – which they had.

Frank laid the meat tray down and crouched over it, pretending to eat.

Varg and Irgas patiently waited by either side for him to finish, seemingly content with eating his leftover scraps.

Frank began raising them when they were eight-day-old pups and needed constant care. 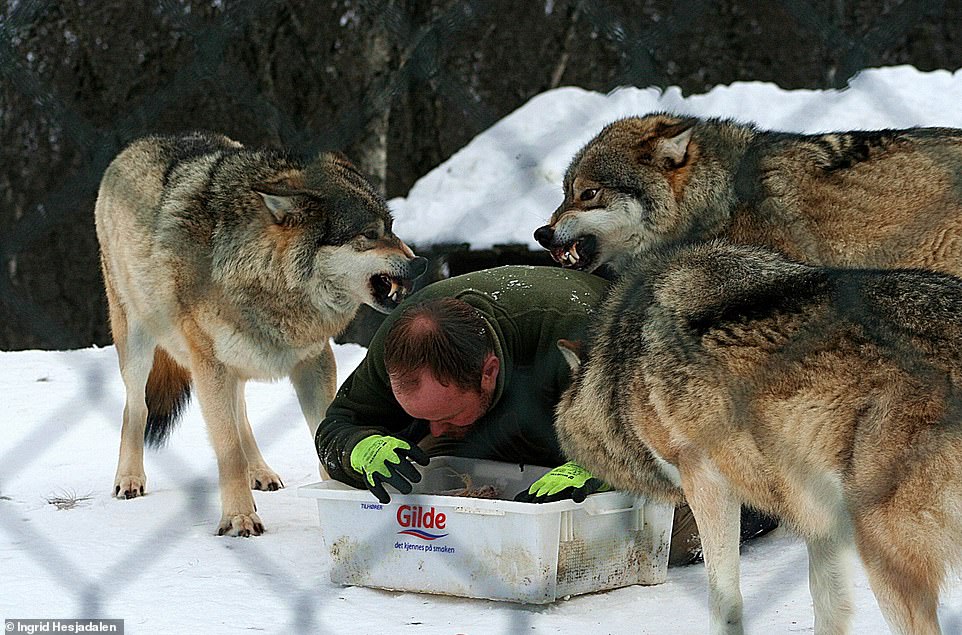 What big teeth you have! Frank pretends to eat and the wolves wait for him to finish while snarling at each other at Langedrag Park. Frank thinks wolves get a bad reputation from fairy tales and popular myths. He likes to educate people about their softer side 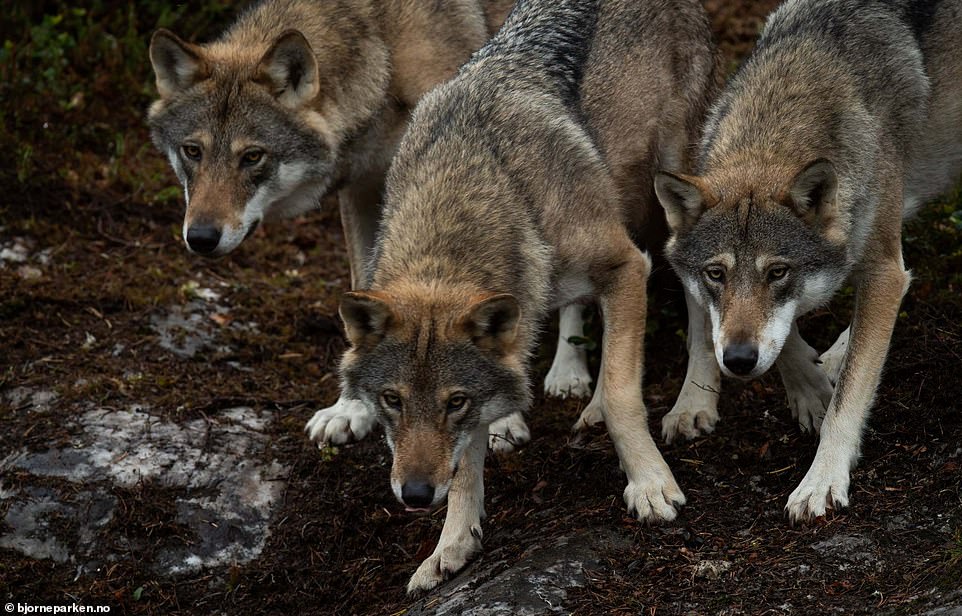 Frank worked at Langedrag for 19 years and has worked at the Bear Park for the past two. There are currently three wolves at Bear Park – Frank can enter their enclosure to feed them but is still building up their trust

For the first six weeks Frank would sleep with them to keep them warm and feed them every three hours.

It was important to make ‘first contact’ so they would get used to him, he said.

‘I feel so lucky to have a relationship with these amazing animals and see them everyday,’ he said.

The wolves treated Frank with the respect they’d give to the leader of the pack, played with him and even let him pick them up and carry them around.

Frank raised four wolves during his 19 years working at Langedrag Nature Park but two of them, Ask and Embla, passed away leaving behind the younger wolves, Varg and Irgas. 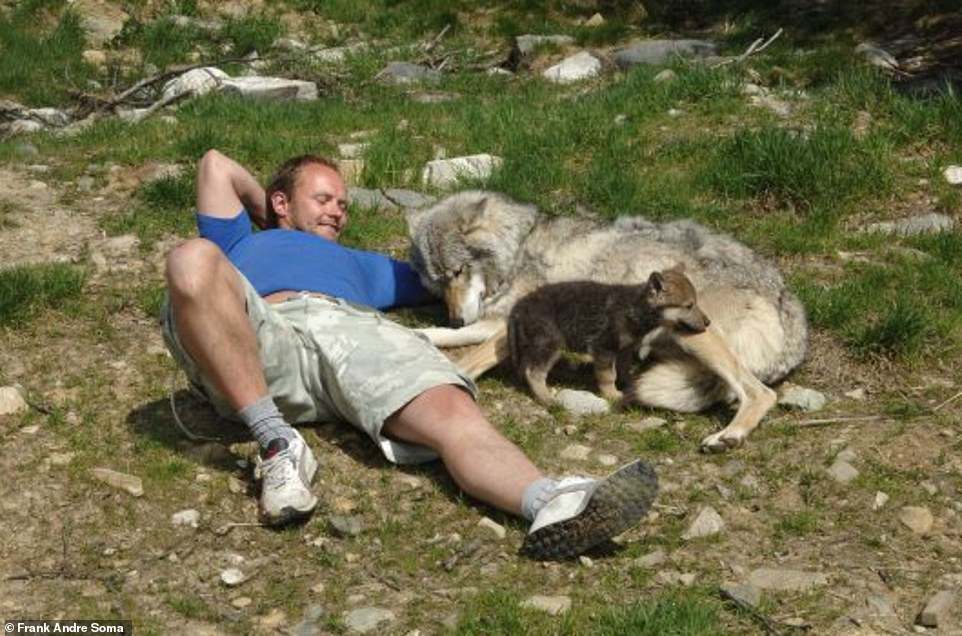 Pack mentality: Frank sits with Varg when he was a puppy and Embla, a female wolf who once attacked him. Varg, Irgas and the late Ask came to his rescue when she attacked him at Langedrag 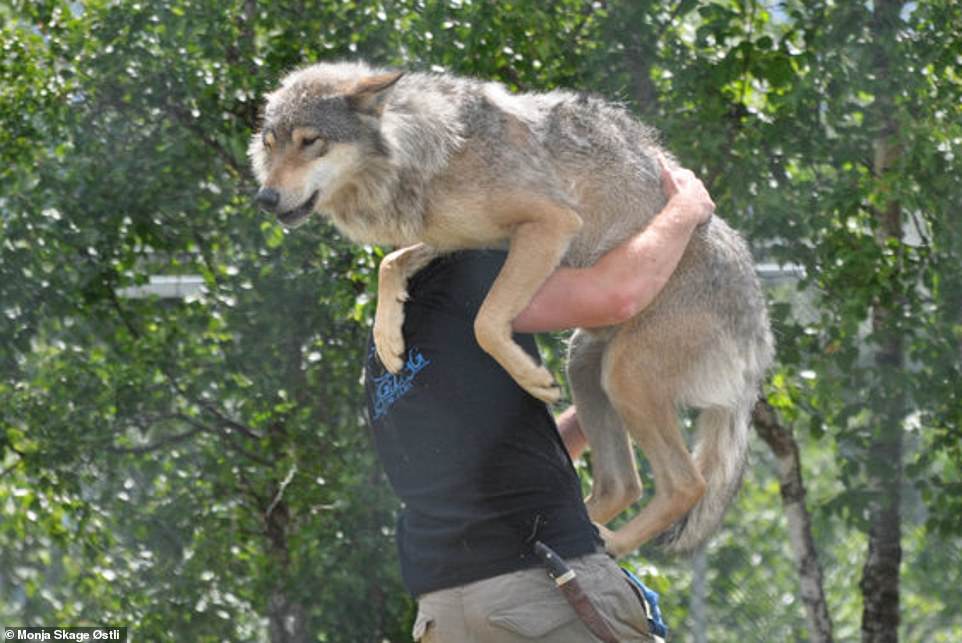 Need a lift? Frank carries a wolf over his shoulder. They typically weigh 32-59 kilograms. This photo was taken at Langedrag Nature Park

Frank said he had had a few close calls with the wolves.

On one occasion Embla attacked him in the enclosure – but three others from the pack protected him.

‘They are just like normal puppies but they grow very fast. By six months they reach mature size,’ he said.

Varg and Irgas are ‘socialised’ wolves who are fussy about the humans they interact with – only Frank and the Langedrag owner Tuva Thorson can enter their enclosure.

I was allowed in another enclosure that belongs to ‘wild’ wolves where visitors can feed the grey beasts.

We sat on a circle of logs and Frank howled to call the wolves. The wolves howled back.

Three wolves appeared one by one and cautiously approached until we were surrounded by the pack.

They circled around us as if they were sizing up their meal.

Frank assured us that they were more scared of us than we were of them. I doubted it.

We threw out frozen meatballs and the wolves would timidly approach to quickly grab their snack.

Frank told us not to stand up or make any sudden movements since it would scare them away. 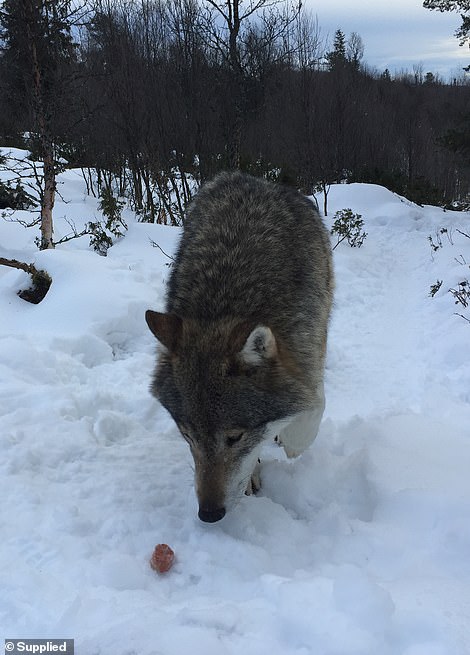 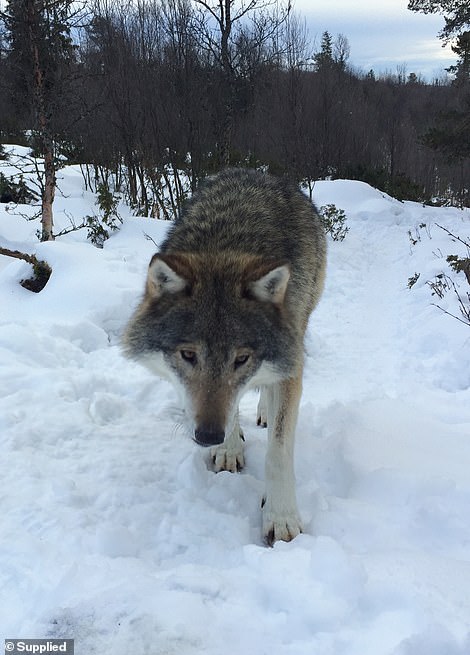 Closer and closer: Shive fed wild wolves frozen meatballs at Langedrag Nature Park. He writes: ‘We locked eyes a few times – both scared of each other’ 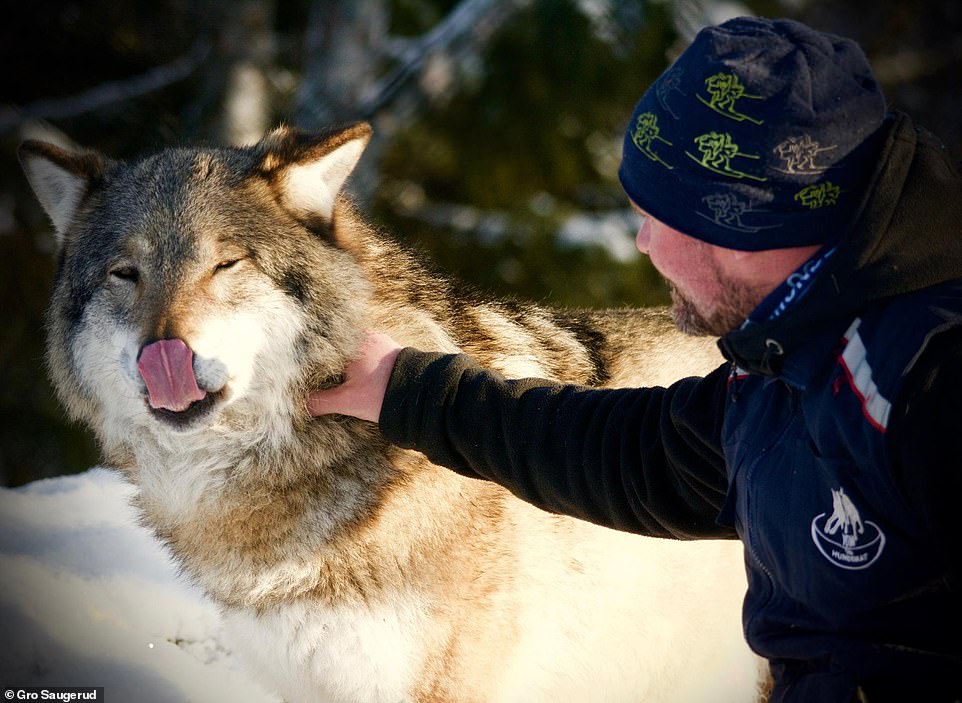 Frank pets a wolf at Langedrag Nature Park. ‘Dogs are our most popular pet. These are their ancestors, the first dogs,’ Frank said. Frank said raising wolves is similar to raising dogs except they grow much faster. A wolf can reach mature size in six months 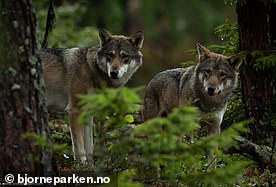 Two wolves from the Bear Park in Norway

I gradually threw the meatballs closer to me until the wolves came within a metre of where I was sitting.

I locked eyes with the wolves a few times and was surprised by how cautious they were around us humans. Maybe looks can be deceiving.

Frank has now been working for two years as a predator specialist at the Bear Park, a two-hour drive north west of Oslo.

‘I was offered a good job in the Bear Park and saw the necessity of my aging to take it,’ he said.

The park has a three-hectare enclosure for the wolves to roam that Frank describes as ‘the best in the world’.

He is able to enter the enclosure and is working to build up the trust of the three wolves there but they are very shy like the ‘wild’ wolves at Langedrag.

The closest he has come to them is three metres. But he will never have the same relationship with them as he does with Varg and Irgas since he didn’t raise them.

He still visits Varg and Irgas at Langedrag and only lives one hour away.

‘I can see my wolves at any time in the few years they have left. And it’s like they understand because they are happy when they see me,’ Frank said.

Frank likes to educate people about wolves to change their view of them as aggressive killers.

‘Dogs are our most popular pet. These are their ancestors, the first dogs,’ he said.

It is rare to see wild wolves in Norway since the estimated population of 59-66 is restricted to a ‘wolf zone’ in the south east.

The Norwegian government approved the killing of 42 wolves during the annual winter hunt in 2017-18. 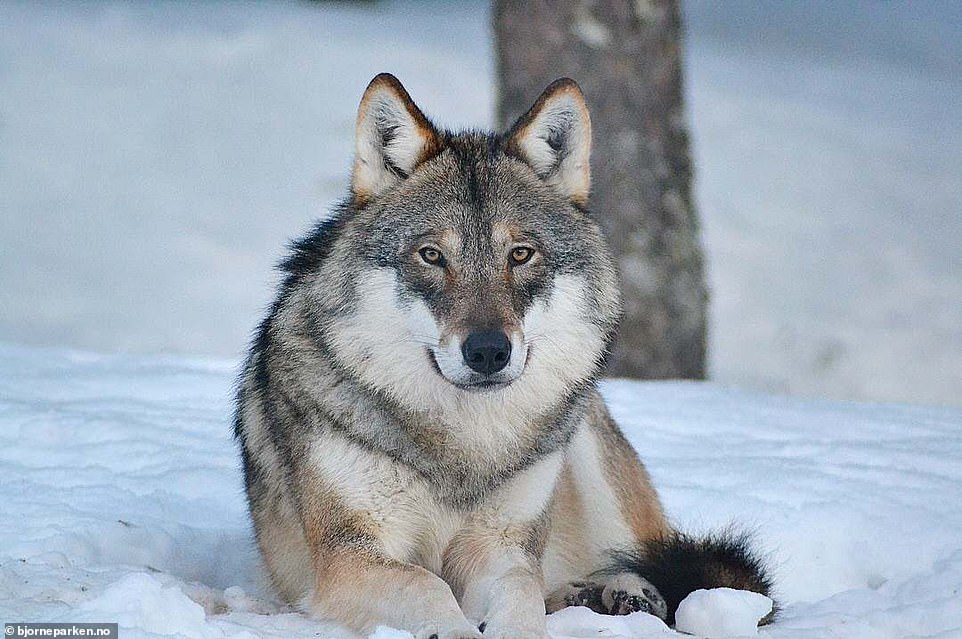 A wolf at the Bear Park where Frank works, a two-hour drive north west of Oslo