Meet the woman who would be Catalonia’s First Lady

This is the stunning former actress whose discreet first year as First Lady of Catalonia could give rise to more fame and fortune if the region’s dreams of independence become a reality.

Pretty Romanian Marcela Topor, 39, met Catalan president Carles Puigdemont nearly 20 years ago when she was on tour in her husband’s native province of Girona with a British theatre company.

Besotted Puigdemont travelled to the timber merchant daughter’s home city of Iasi 230 miles north of the capital Bucharest to woo her and get to know her deeply-religious family.

They married 17 years ago with a civil ceremony in the Costa Brava resort of Roses and an Orthodox wedding ceremony in Marcela’s homeland.

She is said to speak English with a slight British accent, having spent time living in London.

She works as the editor of Catalonia Today, an English-language magazine and website based in Girona her husband helped launch in 2004 as a free newspaper before leaving journalism to go into politics.

She also hosts the television programme Catalan Connections, which features interviews in English with resident foreigners in Catalonia. 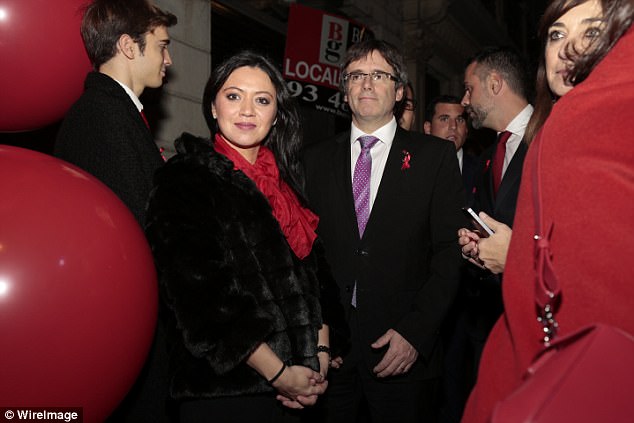 She was filmed planting a kiss on her husband’s lips when he was invested as Catalan president in January last year.

One local TV journalist joked afterwards that with ‘such a different and beautiful wife’ Puigdemont was always going to make sure he drove the 75 miles back from Barcelona to his home in Girona after work to sleep.

But after their headline-grabbing smacker, Marcela has gone out of her way to stay in the background.

She has privatised her Facebook and steers clear of talking politics on social media, using her Twitter account last week to promote her interview with a retired university professor and writer on Catalan Connections while her husband prepared for Sunday’s illegal referendum which descended into violence as Spanish police tried to evict voters and close polling stations.

But she is known to be a fervent supporter of independence like her husband, with some close to the couple claiming she is even more driven in her desire to see Catalonia separate from the rest of Spain. 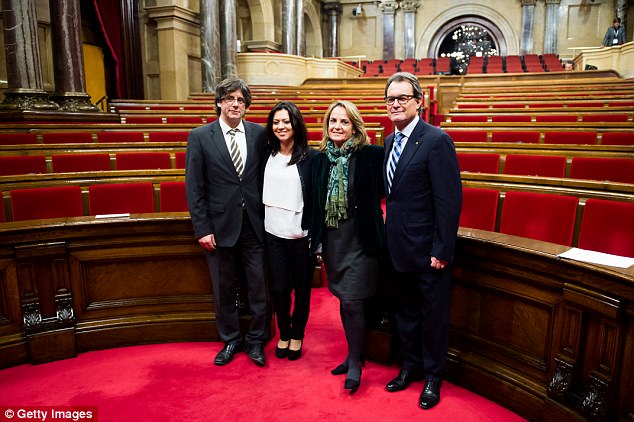 In a rare interview on Catalan TV last December, a month after her husband insisted he was ready to go to prison if necessary, she said: ‘I’m never afraid and I don’t think about that. I’m the sort of person who sees a glass half full. I’m positive and optimistic. Thinking about things like that is not good.’

Revealing she spoke Romanian with her two daughters, she added: ‘I feel Catalan but I try to maintain my identity.

‘I like to stay true to tradition and I have an open mentality.’

Interviewer Pilar Rahola even got onto the subject of sex, asking Marcela if there was a place and a time for it, and receiving the polite reply: ‘Like other questions you have asked me, I would say it depends. It depends on the moment.’

The pretty brunette was dubbed ‘Queen of Independence’ by one Madrid-based daily just before Sunday’s vote.

Neighbours at the upmarket private estate overlooking a golf course in Girona where the couple live, in a villa with its own swimming pool which they put on the market shortly before Puigdemont became Catalan president for just over £600,000, describe the couple as ‘very discreet.’ 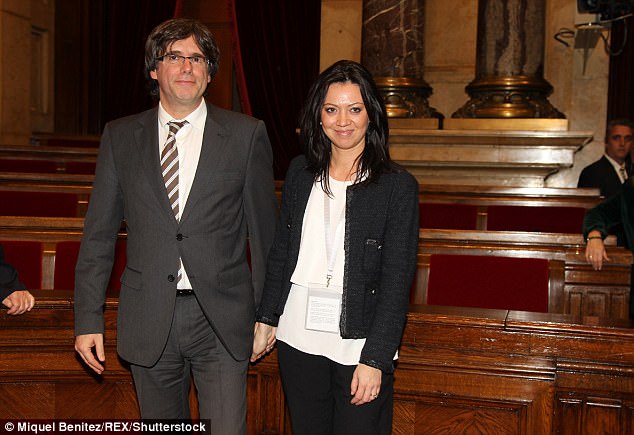 One told Spanish daily El Espanol they were keen motorcyclists and claimed Marcela preferred skirts and dresses to leathers when she went out with her husband.

Her daily routine is said to consist of taking her children to state school before going into work and spending as many afternoons as possible with her daughters. Occasionally she travels to Barcelona to enjoy a night at the theatre.

One Spanish paper unkindly dubbed her as the ‘absent First Lady’ last month by nullifying her with the words: ‘Virtually nowhere to be seen, absent in the key moments, reduced to playing the role of the president’s companion. 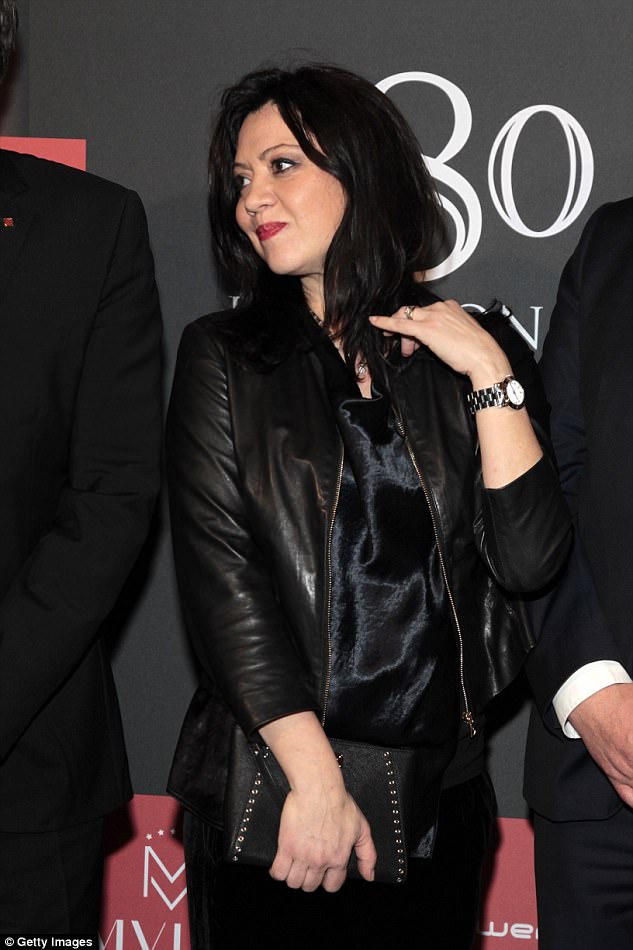 ‘Nothing like her predecessors. The First Lady of Catalonia, Marcela Topor, is focusing on her journalistic career while her husband is a protagonist in one of the most complex episodes of recent times.’

Other reports have highlighted what they describe as Marcela’s fondness for witchcraft.

Spanish right-wing daily La Razon recently highlighted the present she gave her husband the day he was invested Catalan president – a decorative clay figure called the Horezu Rooster which is at the core of Romanian pottery and is seen as a symbol of light and power over the forces of darkness.

It went on to describe her as a ‘type of sorceress’, saying: ‘Discreet, shy and strongly attached to the traditions of her country, Romania.

‘Very religious with strong spiritual beliefs. A fortune-teller who believes in the afterworld. This is how work colleagues define Marcela Topor, the First Lady of Catalonia.’