Humanity has finally captured its first clear look at an object in the faraway Kuiper Belt.

NASA revealed the first images and science data from this week’s historic flyby in a news conference Wednesday afternoon.

Far from the blurry ‘bowling pin’ we saw with New Horizons’ first look when it beamed its signal home early morning on January 1, the new images reveal Ultima Thule is snowman-shaped red world with two distinct lobes – one stacked atop the other.

Humanity has finally captured its first clear look at an object in the faraway Kuiper Belt. NASA revealed the first images and science data from this week’s historic flyby in a news conference Wednesday afternoon.

WHAT’S NEXT FOR THE MISSON?

Highly anticipated close-ups will be coming on on Wednesday or Thursday.

Overnight tonight, the science team will be analyzing the first high resolution images.

Color images will come down this week, Alan Stern said.

Over time, the resolution will improve.

Jubilant NASA scientists celebrated on New Year’s Day after confirmation their New Horizons probe reached the solar system’s outermost region, flying close to a space rock 20 miles long and billions of miles from Earth on a mission to gather clues about the creation of the solar system.

The New Horizons probe was slated to reach the ‘third zone’ in the uncharted heart of the Kuiper Belt at 12:33 a.m. this morning ET – but NASA did not receive confirmation it was a success until 10:31am.

Alice Bowman, the New Horizons Mission Operations Manager, known as ‘MOM’ received the updates from mission engineers, who one by one called in their status as green.

‘We have a healthy spacecraft, we have just completed the most distant flyby,’ she said.

Engineers ‘locked onto’ the signal, and data began to be downloaded from a tracking system in Madrid.

‘Everything looks great, we are looking forward to getting down the science data. 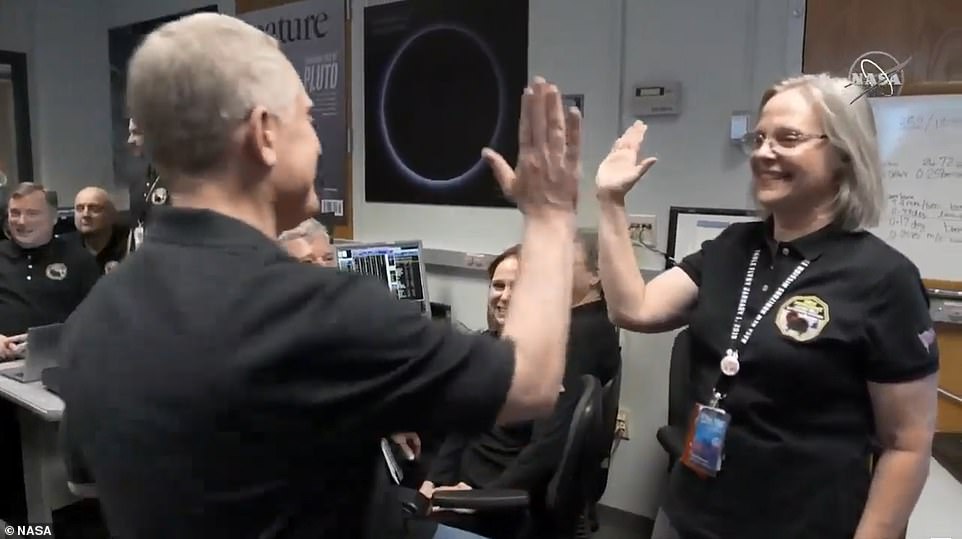 Alice Bowman, the New Horizons Mission Operations Manager (right), known as ‘MOM’ received the updates from mission engineers, who one by one called in their status as green. she is seen here high-fiving Alan Stern, the principal investigator of the New Horizons mission.

‘I’m really liking this 2019 thing so far,’ said Mission Controller Alan Stern, who said he had got a good night’s sleep after celebrating the flyby last night.

Stern revealed the last picture the craft took before the flyby, and promised better images tomorrow.

‘Overnight tonight, the science team will be analyzing the first high resolution images, and we’ll show you those tomorrow.

‘It could be bi-lobate, with asymetric lobes, or it could be these are two things in orbit – and tomorrow we will known which is the case.’

‘Everything we are seeing now happened about six hours ago,’ said Mark Holdridge, the Encounter Mission Manager.

‘There’s a lot of anxious people staring at screens in Mission control’. 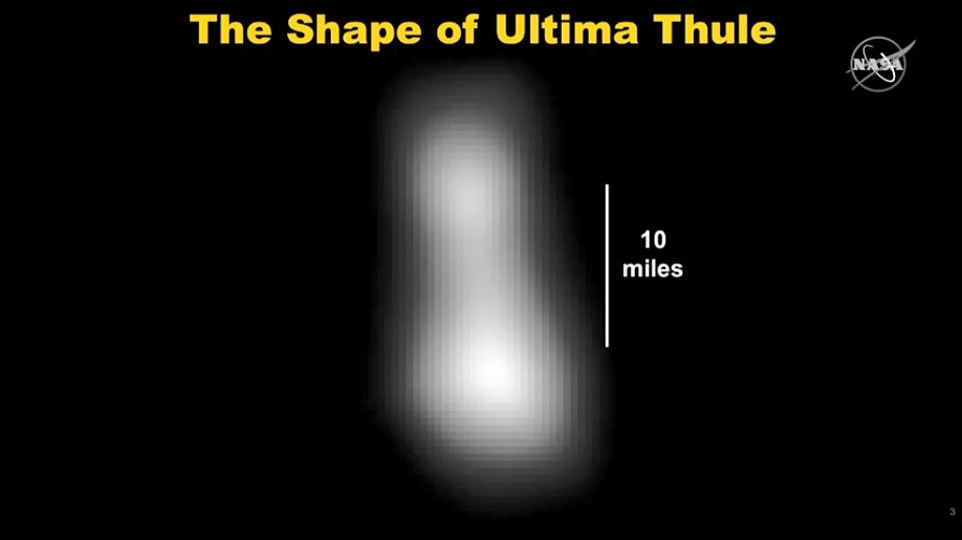 Stern revealed the last picture the craft took before the flyby, and promised better images tomorrow 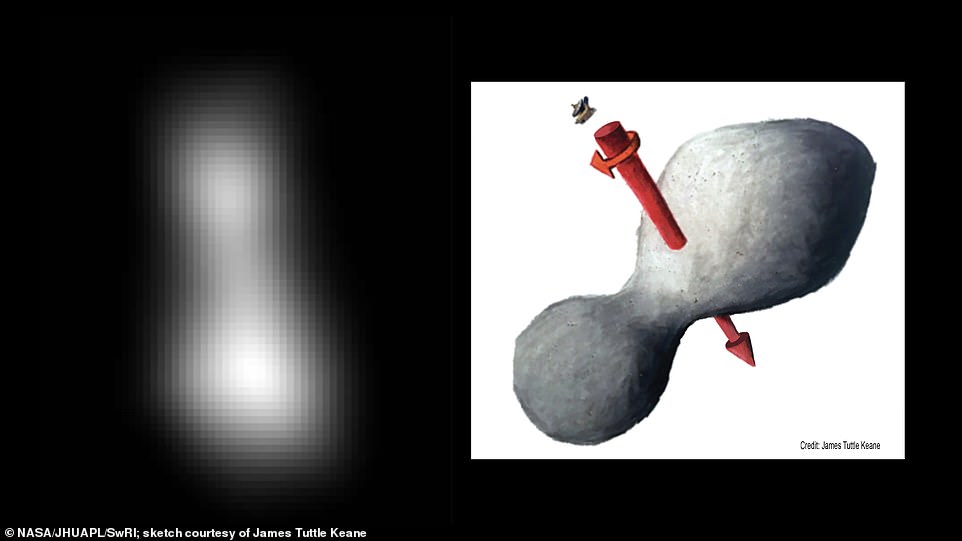 Detecting Ultima Thule’s Size and Shape on Approach: At left is a composite of two images taken by New Horizons’ high-resolution Long-Range Reconnaissance Imager (LORRI), which provides the best indication of Ultima Thule’s size and shape so far. Preliminary measurements of this Kuiper Belt object suggest it is approximately 20 miles long by 10 miles wide (32 kilometers by 16 kilometers). An artist’s impression at right illustrates one possible appearance of Ultima Thule, based on the actual image at left. The direction of Ultima’s spin axis is indicated by the arrows.

Now it is entering the peripheral layer of the belt, containing icy bodies and leftover fragments from the solar system’s creation, the probe will get its first close-up glance of Ultima Thule, a cool mass shaped like a giant peanut, using seven on-board instruments.

The first image of Ultima Thule’s shape was taken during the spacecraft’s approach but clearer pictures are not expected for some time as it can take several hours for radio signals to reach Earth from that far away. 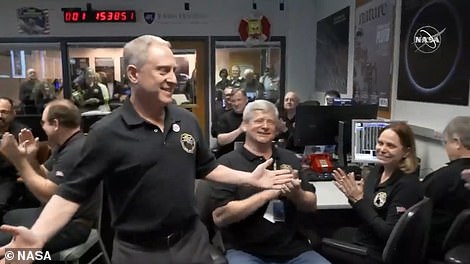 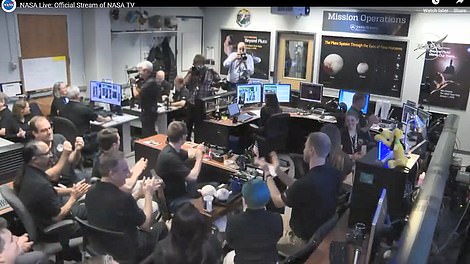 Jubilant NASA scientists were celebrating this morning celebrating after confirmation their New Horizons has reached the solar system’s outermost region, flying close to a space rock 20 miles long and billions of miles from Earth on a mission to gather clues about the creation of the solar system. Left, Alan Stern, the principal investigator of the New Horizons mission 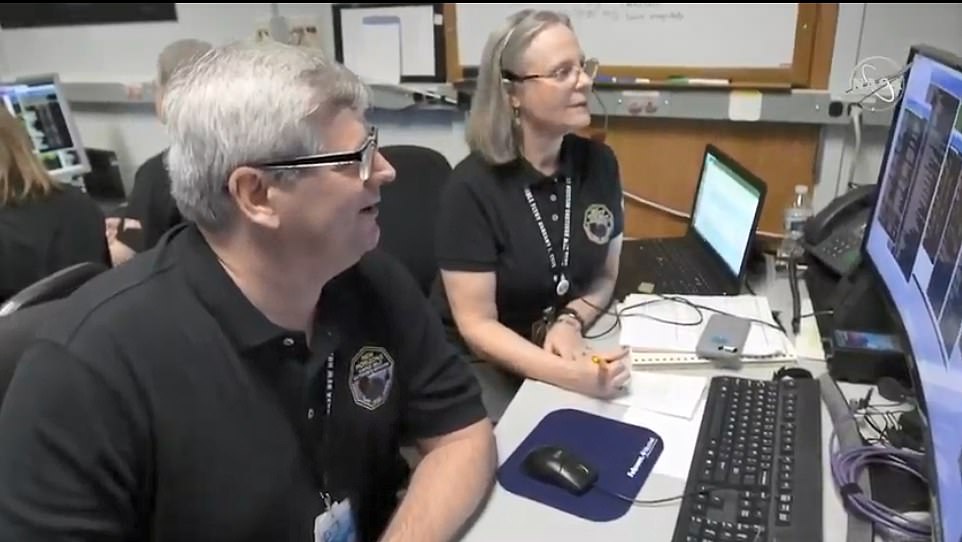 Alice Bowman (right), the New Horizons Mission Operations Manager, known as ‘MOM’ received the updates from mission engineers, who one by one called in their status is green. ‘We have a healthy spacecraft, we have just completed the most distant flyby,’ she said.

Flight controllers had said everything looked good for New Horizons’ flyby of the tiny, icy object nicknamed Ultima Thule at 12:33 a.m. on Tuesday.

The mysterious, ancient target is 4 billion miles (6.4 billion kilometers) from Earth and is in the Kuiper Belt. 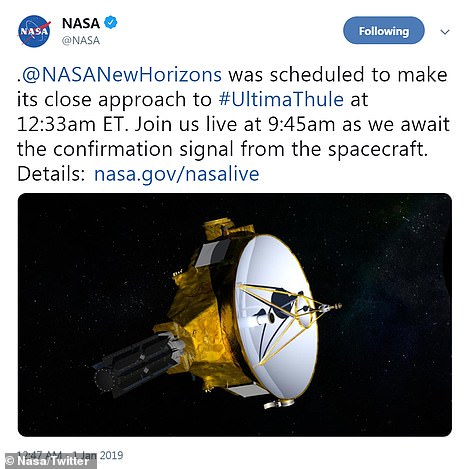 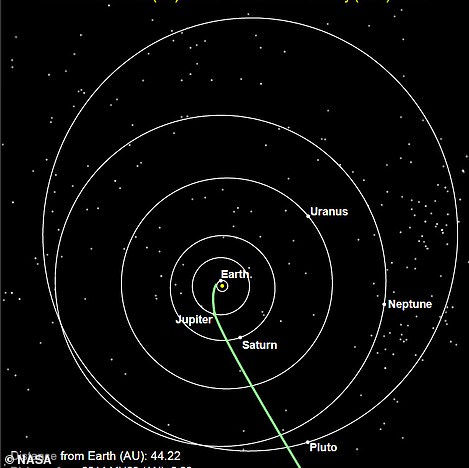 Nasa tweeted after the flyby that confirmation of the signal from the spacecraft will be made public at 9.45am. Right, The green segment of the line shows where New Horizons has traveled since launch while the red indicates the spacecraft’s future path

So they had to wait until late morning before learning whether the spacecraft survived.

Instead, hundreds of team members and their guests gathered nearby on campus for back-to-back countdowns.

A few black-and-white pictures of Ultima Thule might be available following Tuesday’s official confirmation, but the highly anticipated close-ups won’t be ready until Wednesday or Thursday, in color, it is hoped.

‘We set a record. Never before has a spacecraft explored anything so far away,’ said the project’s lead scientist who led the countdown to the close encounter, Alan Stern of Southwest Research Institute. ‘Think of it. We’re a billion miles farther than Pluto.’ 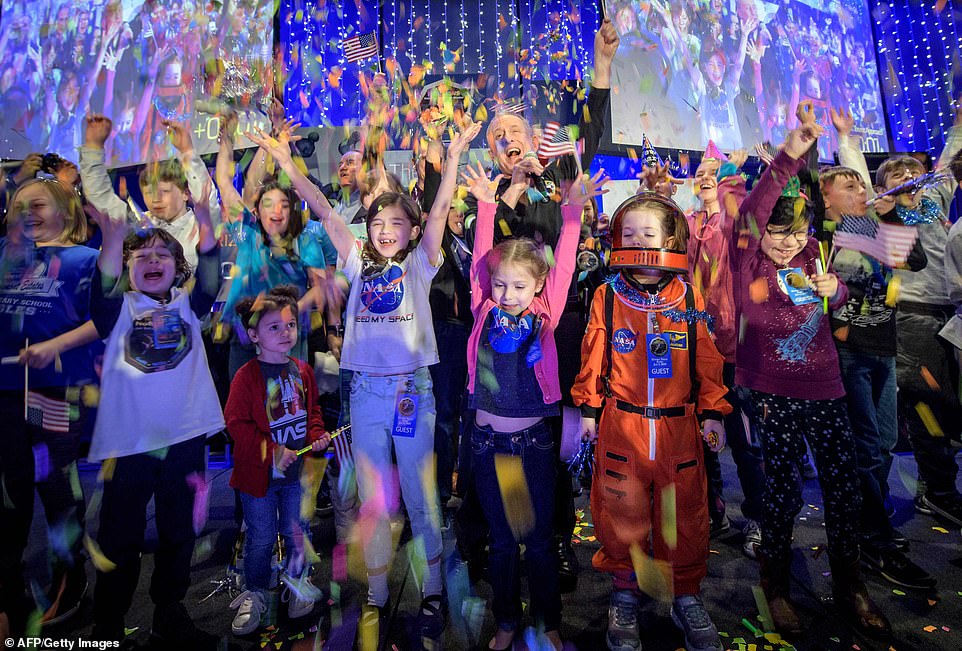 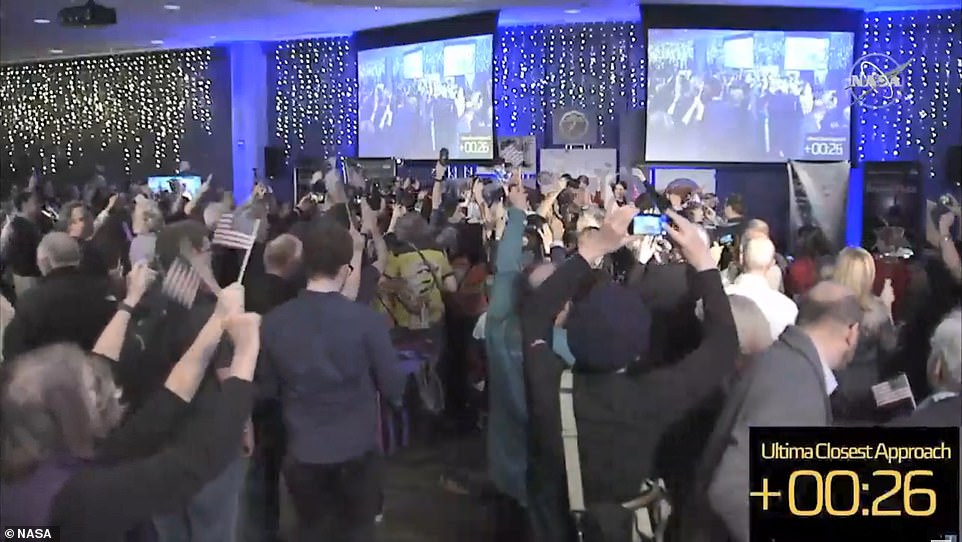 Stern called it an auspicious beginning to 2019, which will mark the 50th anniversary of Neil Armstrong and Buzz Aldrin’s footsteps on the moon in July 1969. People celebrate above 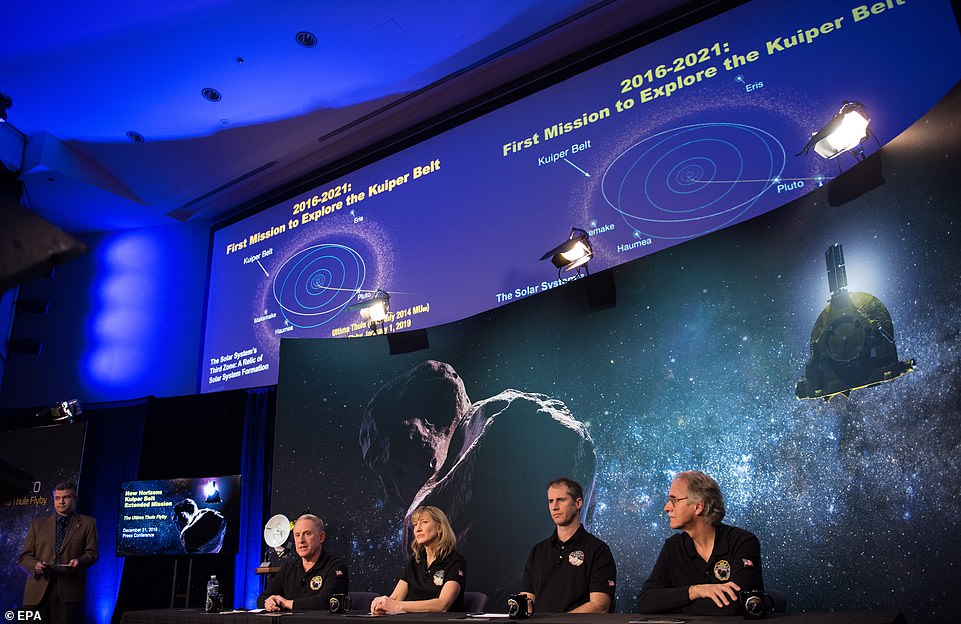 Stern called it an auspicious beginning to 2019, which will mark the 50th anniversary of Neil Armstrong and Buzz Aldrin’s footsteps on the moon in July 1969.

‘Ultima Thule is 17,000 times as far away as the ‘giant leap’ of Apollo’s lunar missions,’ Stern noted in an opinion piece in The New York Times.

New Horizons, which is the size of a baby grand piano and part of an $800 million mission, was expected to hurtle to within 2,200 miles (3,500 kilometers) of Ultima Thule, considerably closer than the Pluto encounter of 2015.

Its seven science instruments were to continue collecting data for four hours after the flyby. 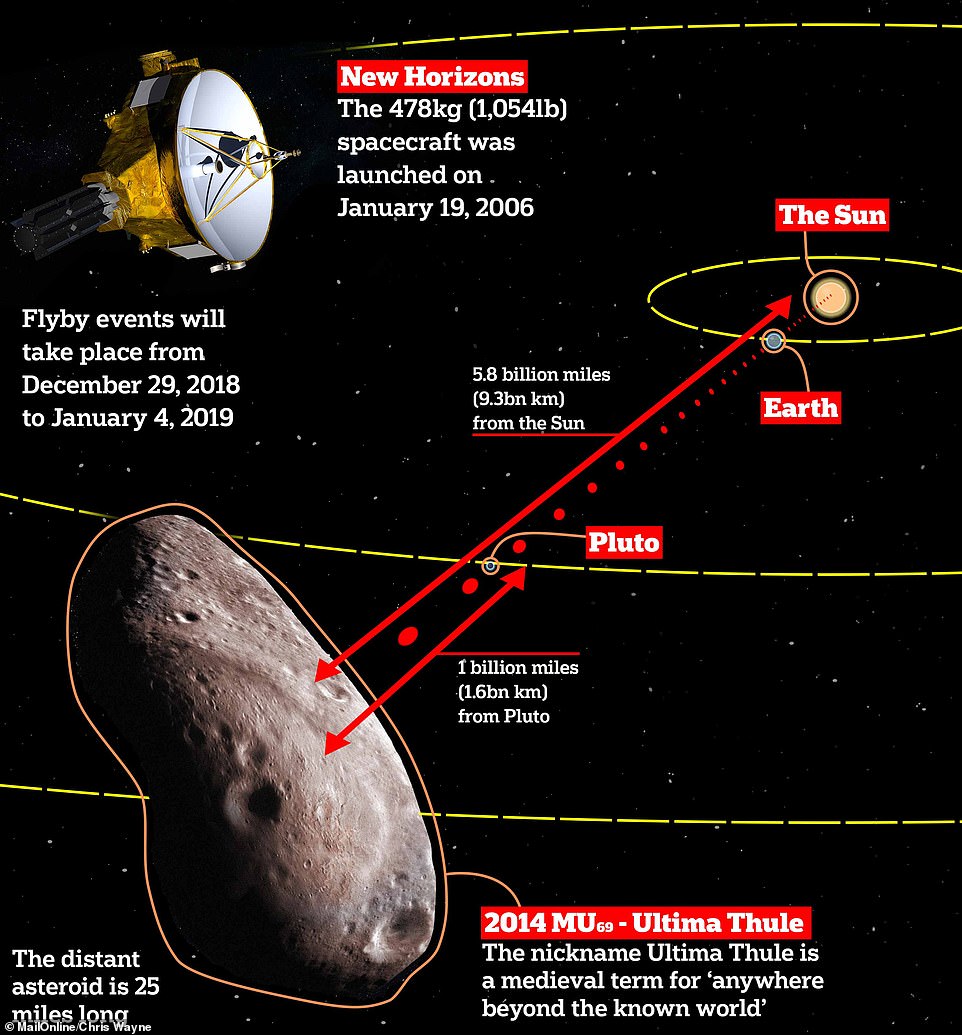 New Horizons has spent more than a decade hurtling through the solar system since it launched on Jan 19, 2006 and passed Pluto in 2015. Its messages take to reach us, despite them traveling at the speed of light

Then the spacecraft was to turn briefly toward Earth to transmit word of its success. It takes over six hours for radio signals to reach Earth from that far away.

Scientists believe there should be no rings or moons around Ultima Thule that might endanger New Horizons.

It’s a tougher encounter than at Pluto because of the distance and the considerable unknowns, and because the spacecraft is older now. 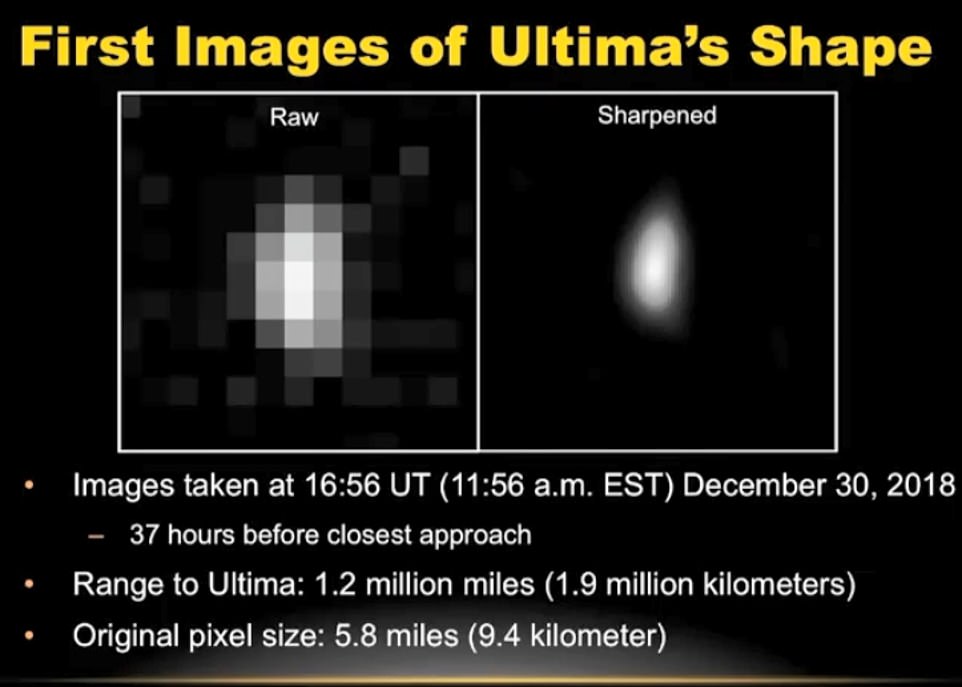 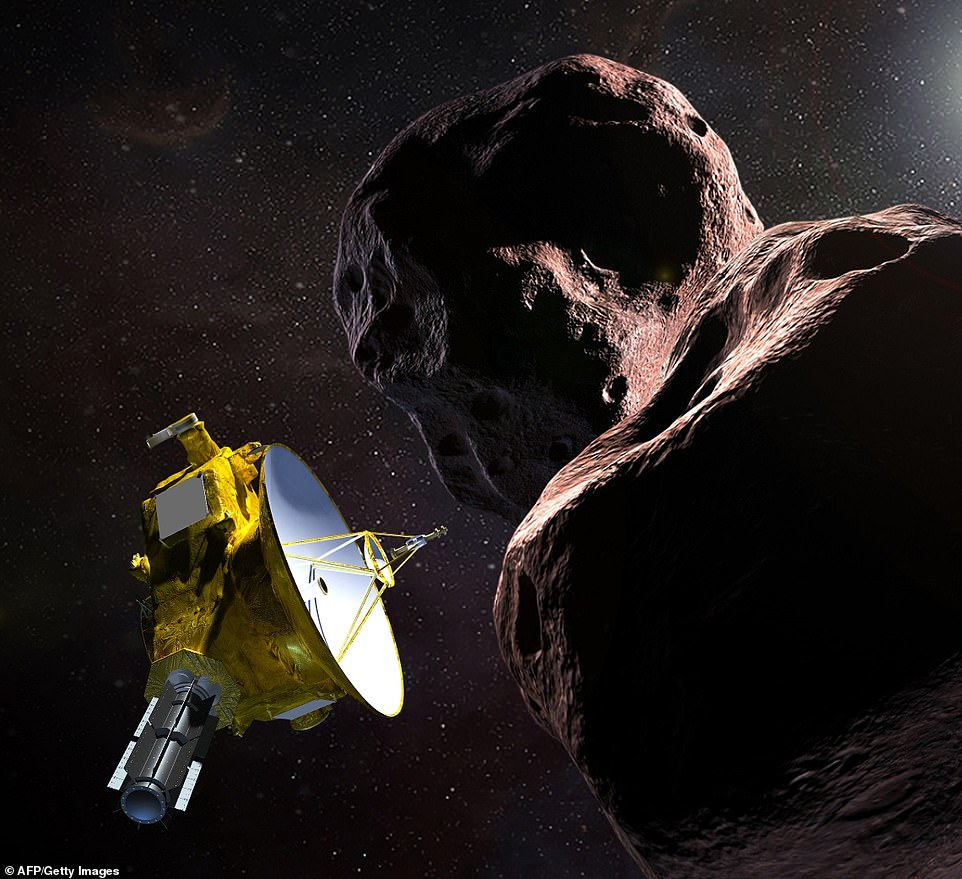 The flyby was fast, at a speed of nine miles (14 kilometers) per second. Seven instruments on board recorded high-resolution images and gather data about its size and composition

‘I can’t promise you success. We are straining the capabilities of this spacecraft,’ Stern said at a news conference Monday. ‘By tomorrow, we’ll know how we did. So stay tuned. There are no second chances for New Horizons.’

The risk added to the excitement.

Queen guitarist Brian May, who also happens to be an astrophysicist, joined the team at Johns Hopkins for a midnight premiere of the rock ‘n’ roll song he wrote for the big event.

‘We will never forget this moment,’ said May who led the New Year’s countdown. ‘This is completely unknown territory.’

Despite the government shutdown, several NASA scientists and other employees showed up at Johns Hopkins as private citizens, unwilling to miss history in the making.

A guitar anthem recorded by legendary Queen guitarist Brian May – who also holds an advanced degree in astrophysics – will be released just after midnight to accompany a video simulation of the flyby. Pictured, May at Mission Control.

Ultima Thule was unknown until 2014, eight years after New Horizons departed Earth. It was discovered by the Hubble Space Telescope and added to New Horizons’ itinerary.

Deep inside the so-called Kuiper Belt, a frigid expanse beyond Neptune that is also known as the Twilight Zone, Ultima Thule is believed to date back 4.5 billion years to the formation of our solar system. As such, it is ‘probably the best time capsule we’ve ever had for understanding the birth of our solar system and the planets in it,’ Stern said. 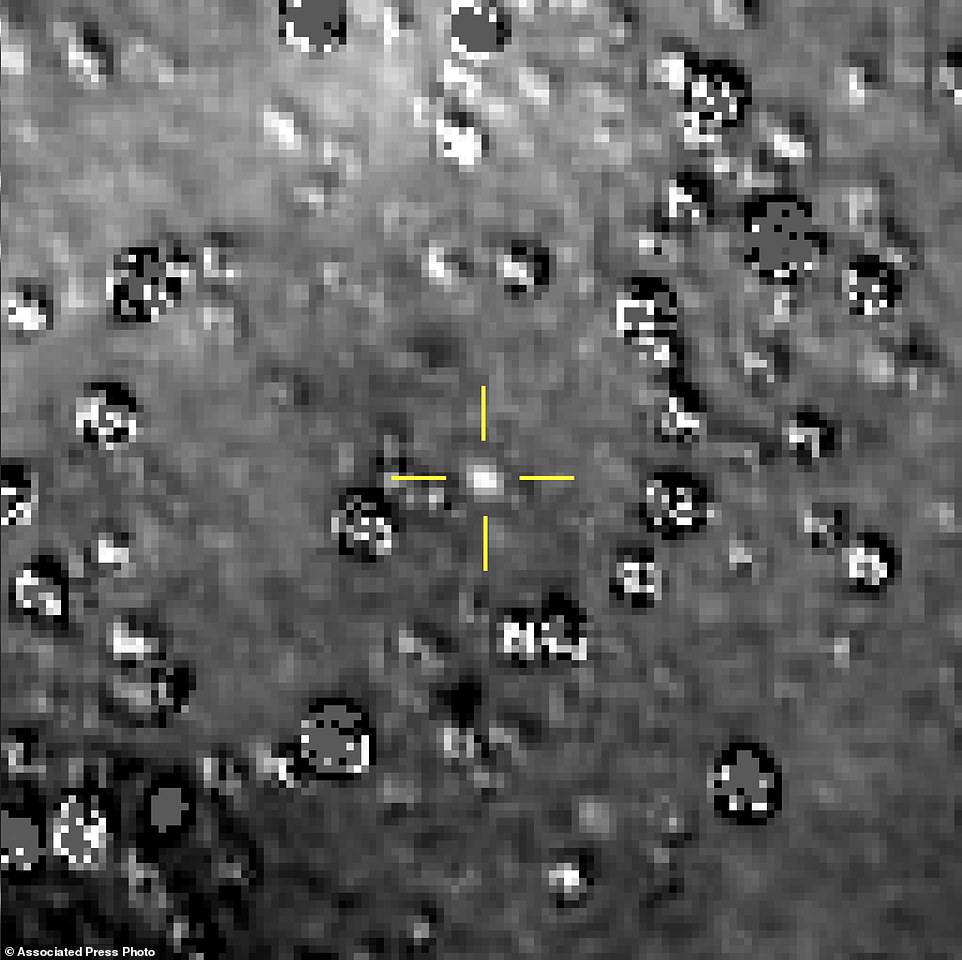 NASA’s New Horizons spacecraft spotted its next flyby target earlier this year from more than 100 million miles away. In the image, Ultima is enveloped in countless stars, appearing as just a tiny speck amidst the bright spots. The yellow box shows its predicted location

WHAT’S NEXT FOR NEW HORIZONS?

While NASA has said goodbye to a few of its veteran craft recently, including Cassini and Kepler, New Horizons’ work may not be ending any time soon.

‘The spacecraft is very healthy, it has fueling power to go on for 15, 20 years,’ Prinicipal Investigator Alan Stern told Dailymail.com.

‘So after we get all the data, that’s what we’re going to do. Work on our next exploration phase.

‘We’re happy about this, it’s an amazing piece of American workmanship this little spacecraft that’s doing so well.’

It is thought to be potato-shaped and dark-colored  with a touch of red, possibly from being zapped by cosmic rays for eons.

The exact shape and composition won’t be known until Ultima Thule starts sending back data in a process expected to last almost two years.

‘Who knows what we might find? … Anything’s possible out there in this very unknown region,’ said John Spencer, a deputy project scientist from Southwest Research Institute. ‘We’ll find out soon enough.’

New Horizons Principal Investigator Alan Stern told Dailymail.com: ‘It’s going to take us 20 months to get all the data back, because data transmission speed is slow from that distance.

‘We’ll be sending back data about Ultima Thule for all of 2019 and most of 2020, until August or September,’ Stern says.

The first picture will get to Earth on the 1st, though this will only reveal Ultima’s shape, Stern says.

‘It will just be a few pixels, like a smudge,’ Stern told Dailymail.com.

Finer details are expected to come in the days to follow, with its surface features coming to light on the 3rd and 4th.

WHAT IS ULTIMA THULE?

The Kuiper Belt object was discovered by the Hubble Space Telescope in 2014. Officially known as 2014 MU69, it got the nickname Ultima Thule in an online vote. 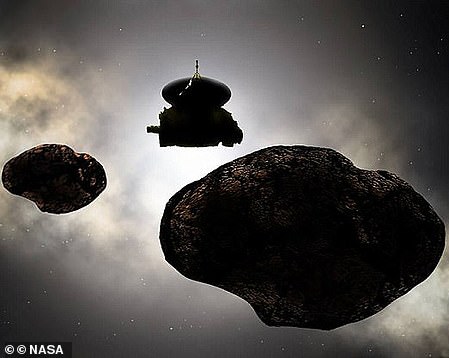 Ultima Thule might not be a single object. Scientists say it’s possible it’s two or many objects. An artist’s impression is pictured