She plays a young Diana in the upcoming Wonder Woman 1984 movie, which is slated for release on Wednesday.

And Scottish actress Lilly Aspell, 13, performed all her own stunts in the action film and is a keen paddleboarder, show-jumper and bike racer in real life.

Wonder Woman’s official title in her homeland is Princess Diana of Themyscira and the adult version of Diana is played by Israeli actress Gal Gadot, 35.

Sharing a picture of herself in her trailer, Lilly wrote: ‘Fun times with my stunt harness #supportstunts’ as she smiled at the camera.

Meet Wonder Woman 1984 star Lilly Aspell: Scottish schoolgirl, 13, performed ALL her own stunts and the keen equestrian prepared for the role with sword training, paddleboard flips and show-jumping (film still) 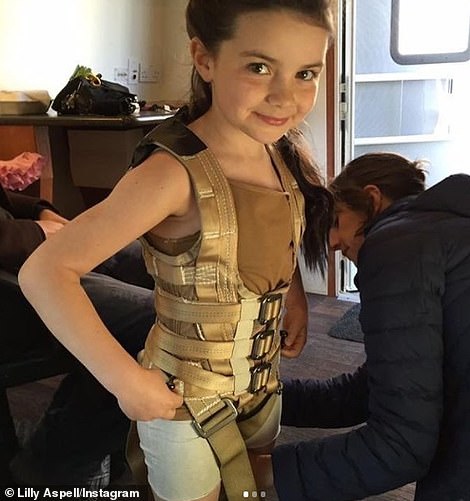 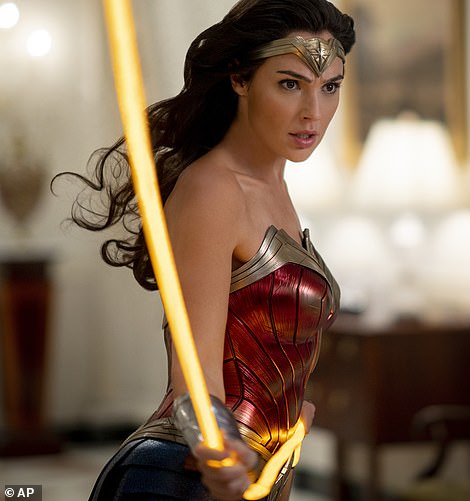 Getting into character: Lilly (left) posted an Instagram pictured of herself being fitted into her safety harness as she wrote #supportstunts’ (left), pictured (right), Gal Gadot as Wonder Woman 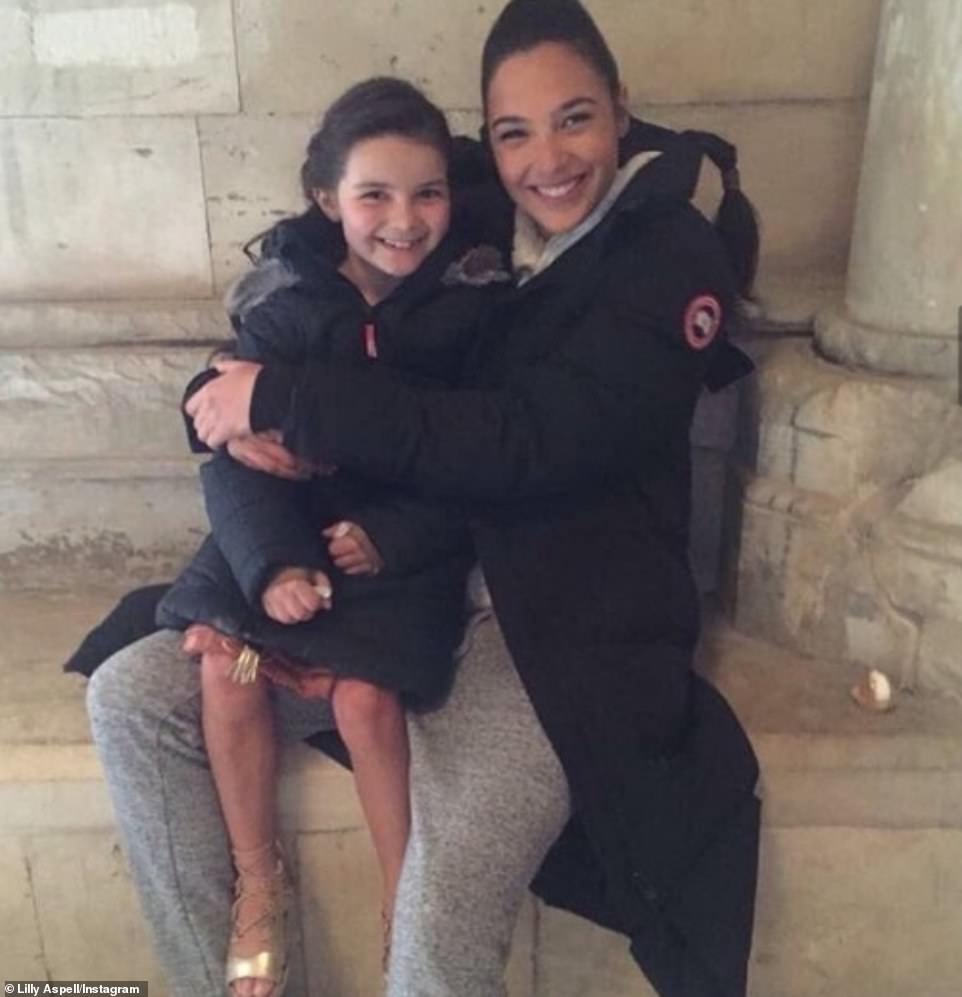 Two Wonder Women: Lilly shared a behind the scenes picture of herself with Gal in April and penned: ‘Happy birthday @gal_gadot. Whoever changes one life, changes the whole world. You changed my life. Love you forever’

Director Patty Jenkins was keen to use minimal CGI in the film and Gal said of Lilly in an interview with Graham Norton this week: ‘She’s the real deal.’

‘She’s 12 [now 13] years old, she works hard, she’s super talented. The stunt co-ordinator came to us and said, “she can stunt herself. We can’t find anyone to stunt her”. Anything you see, she is doing, she is amazing.’

Taking to Instagram, Lilly shared a behind the scenes picture of herself with mother-of-two Gal in April and wrote about how much she had influenced her in her acting career.

She penned: ‘Happy birthday @gal_gadot. Whoever changes one life, changes the whole world. You changed my life. Love you forever.’

Fast as you can: A still from the WW84 trailer shows Lilly outrunning the Amazons, a race of immortal super-women that lived on the magical Paradise Island 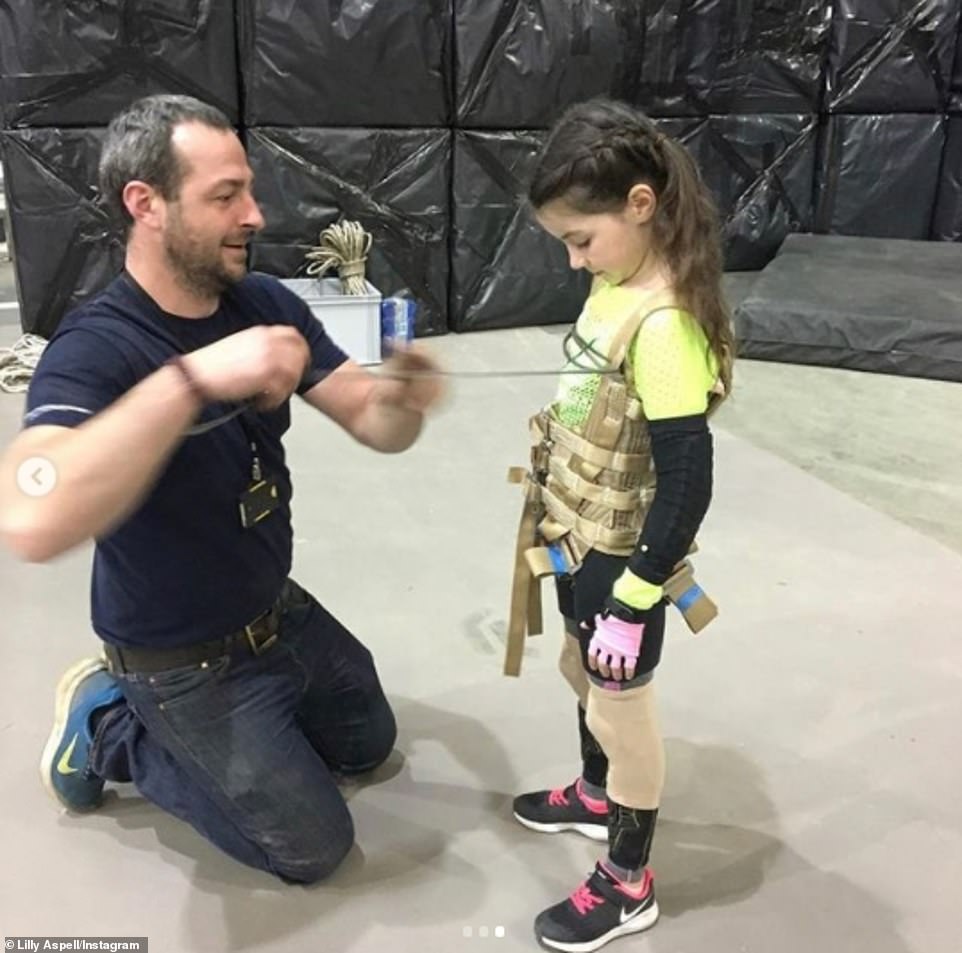 Health and safety: Lilly also shared this picture of herself being laced into her stunt harness – Gal recently said: ‘The stunt co-ordinator came to us and said, “she can stunt herself. We can’t find anyone to stunt her”‘ 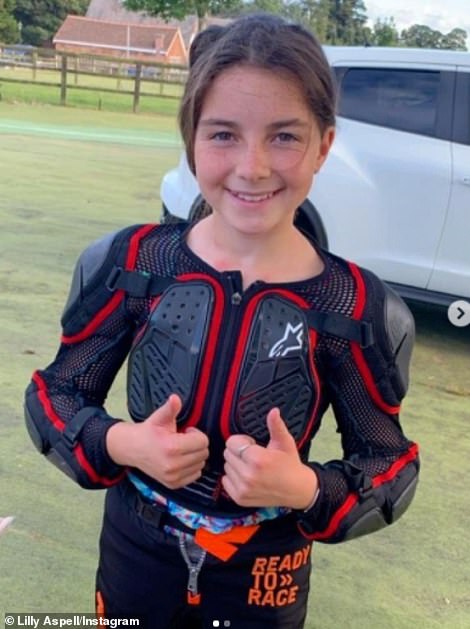 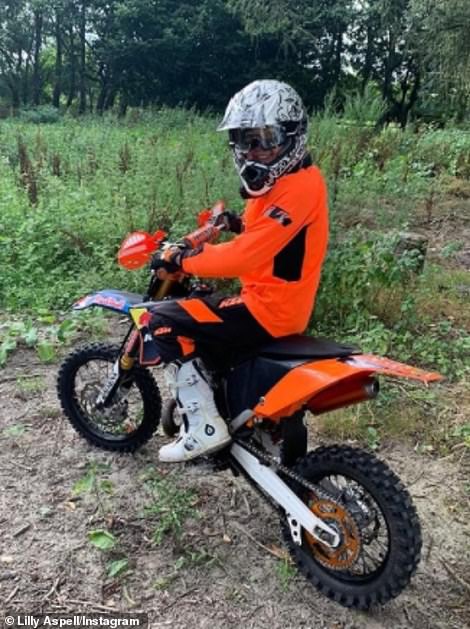 Ready to race: In her own time Lilly loves a bit of all-terrain motorbike racing and isn’t afraid of a little speed 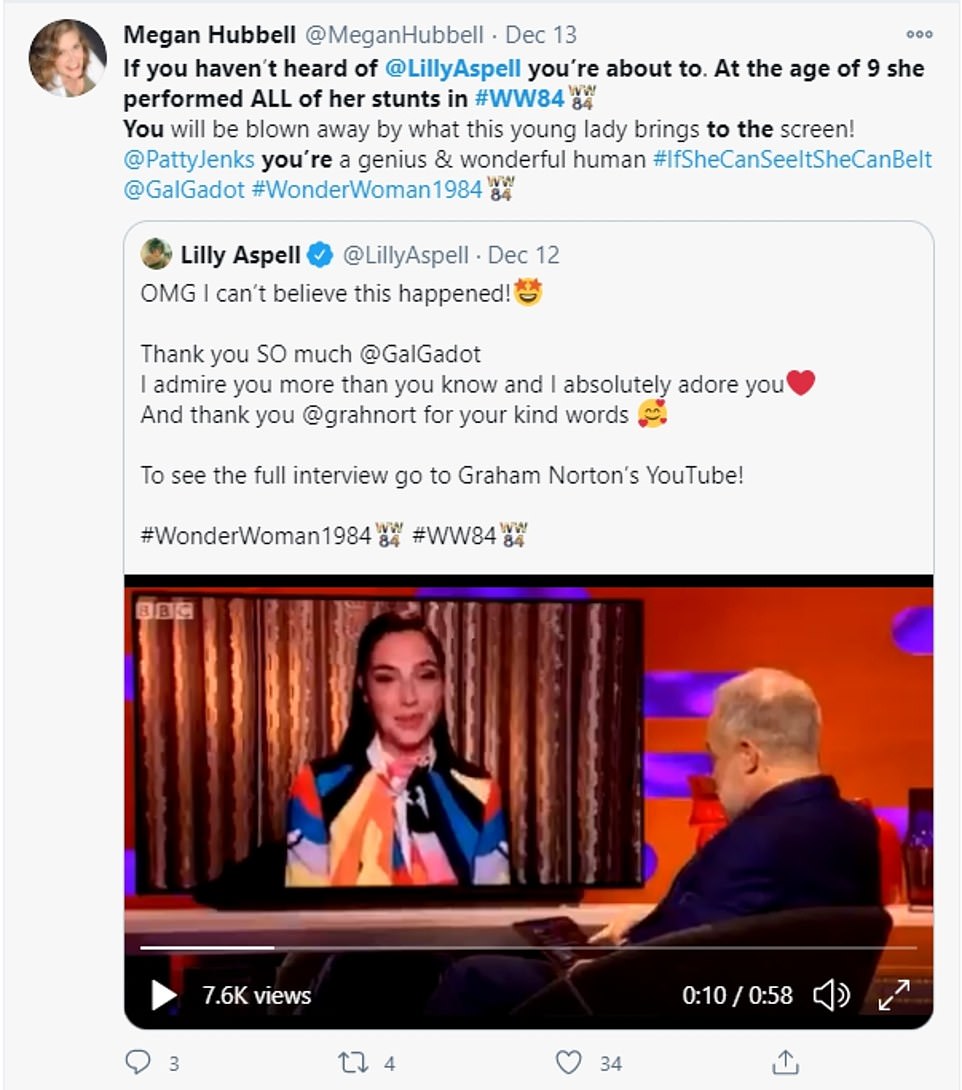 She is one to watch: Gal talked to Graham Norton about Lilly in an interview this week and said of her stunts: ‘Anything you see, she is doing, she is amazing’

Wonder Woman 1984 (or WW84) is an American superhero film based on the DC Comics character and the sequel to 2017’s Wonder Woman.

Fast forward to the 1980s as Wonder Woman’s next big screen adventure finds her facing two all-new foes: Max Lord and The Cheetah.

No wallflower, Lilly, who has also filmed Netflix movie Extraction, practised some of her character’s famous flips on a paddleboard as she jumped into the ocean, under the guidance of @daynastunts. 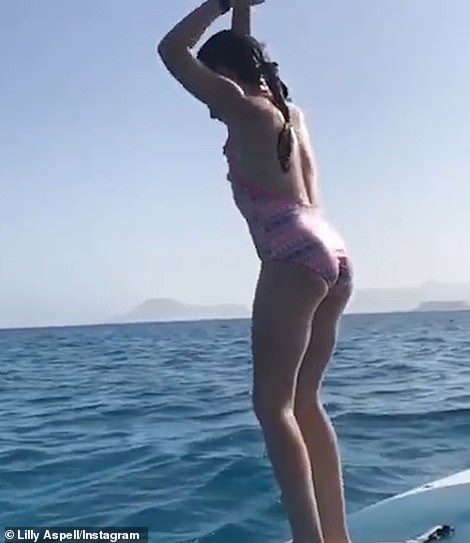 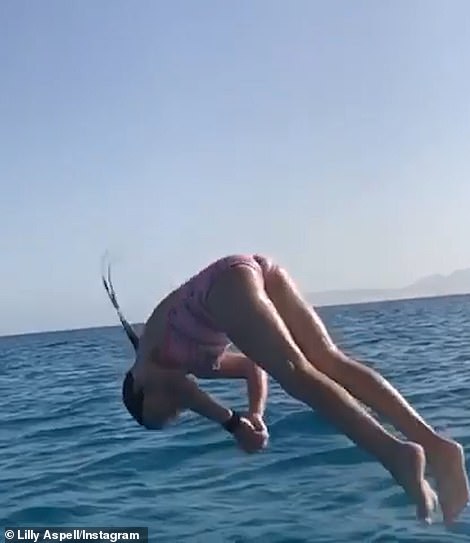 In she goes: Lilly also shared a video of herself practising her stunts as she did a flip into the water off a paddleboard, under the guise of @daynastunts 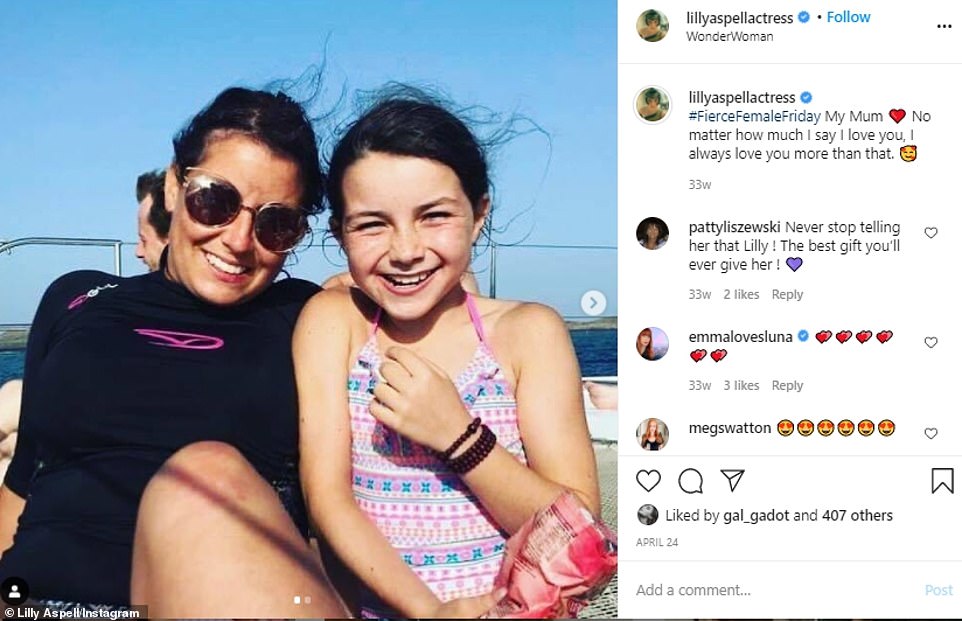 Family: Lilly pictued with proud mum, Donna Caldwell, as she wrote about how much she loves her 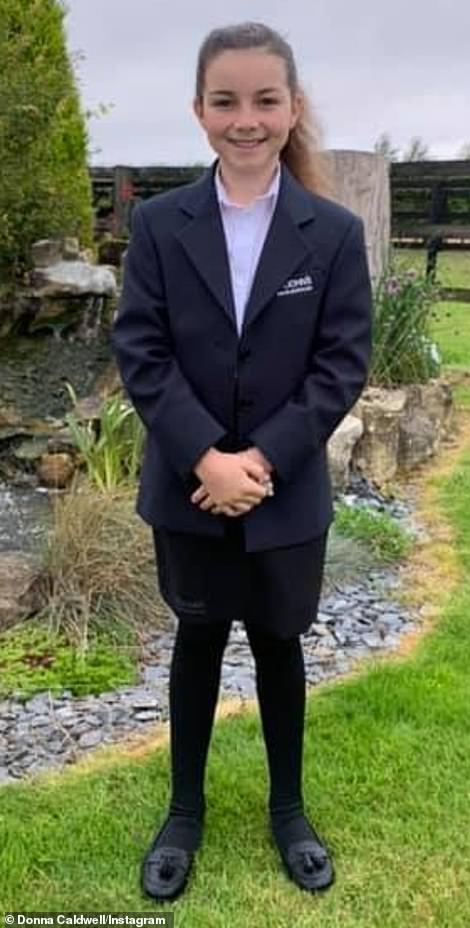 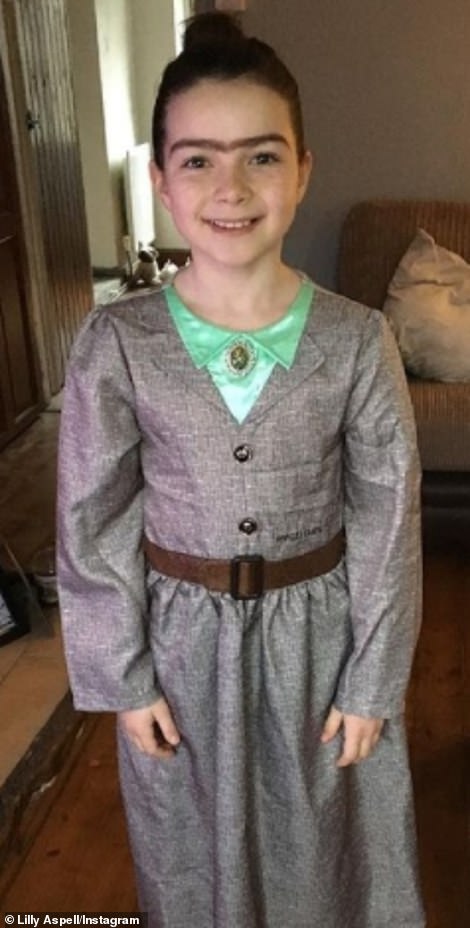 Real life: Lilly’s mother shared this picture of her daughter on her first day at high school back in 2019, writing: ‘Obligatory back to school photograph (Better late than never). #proudmummy’

Battle scenes: Lilly in action in the movie, released on Wednesday, in full costume as young Diana, who later earns herself the moniker Wonder Woman 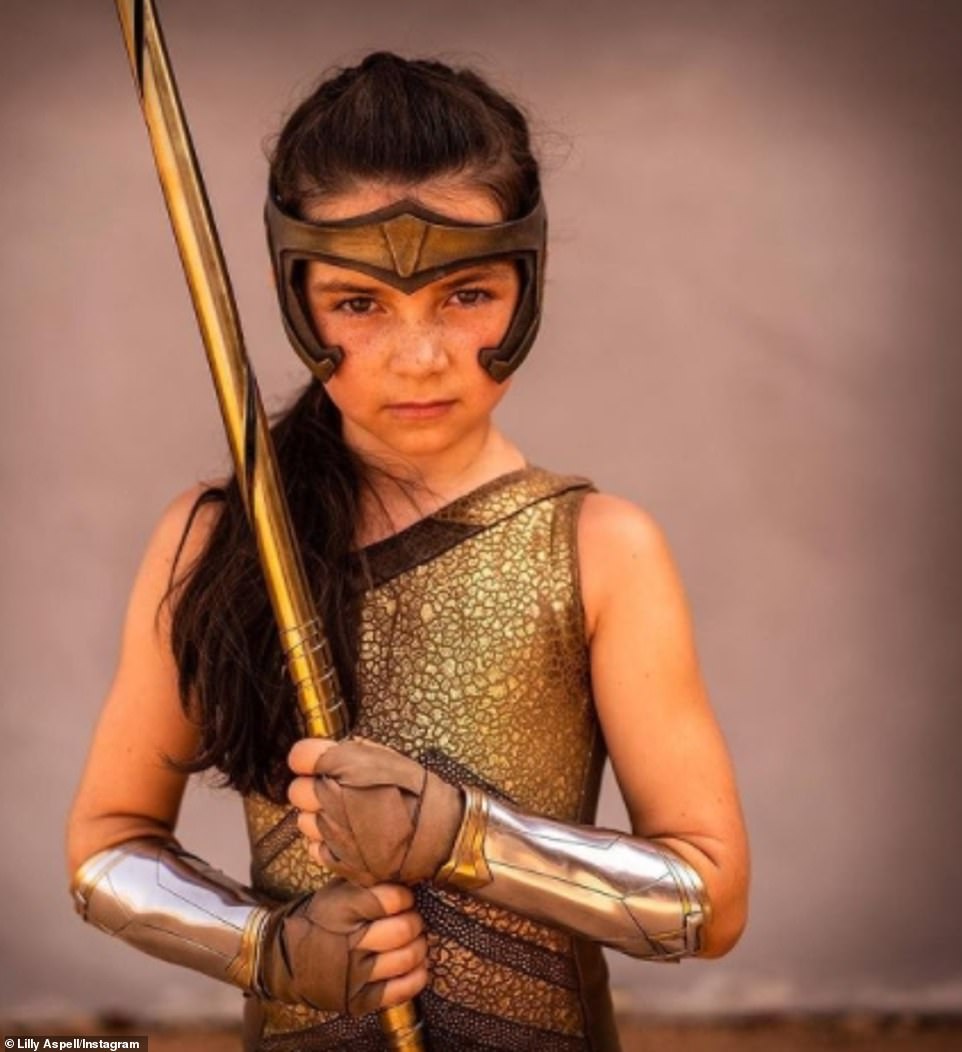 Tagging her location as being in Themyscira, Lilly wrote: ‘SO excited for you to see Wonder Woman 1984’

Both Lilly’s parents are jockeys and she has won countless awards as a show-jumper and equestrian on her pony, Turbo, all documented on her Instagram page.

She shared one picture of herself balancing on the back of her horse with no hands, and another with a selection of rosettes, as she wrote: ‘Winner, winner, chicken dinner.’

Lilly previously told The Hollywood Reporter that her favourite scene to film was on a grey horse called Vendeval, She shared a picture of herself riding him while practising the ‘gallop scene.’ 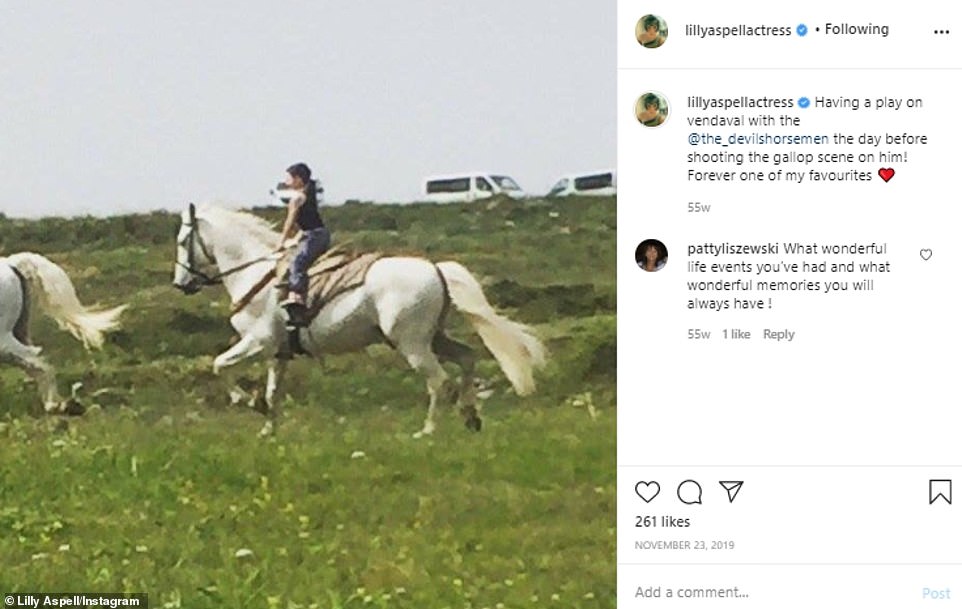 Treasured moments: Lilly has said that her favourite scene to film was on a grey horse called Vendeval, She shared a picture of herself riding him while practising the ‘gallop scene.’ 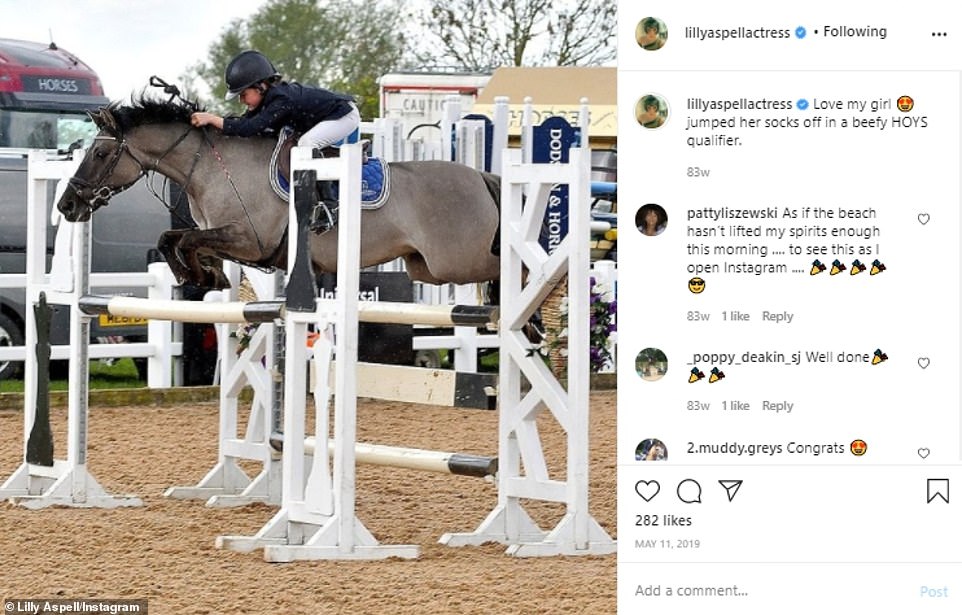 Impressive: Both Lilly’s parents are equestrians and Lilly has won countless rosettes as a showjumper

She said: ‘My favorite scene to shoot was riding Vendeval, the gray stallion, through the yellow field. I think it is an amazing scene and made me smile when I watched the movie.

‘The most challenging was when I run up the stairs away from my tutor. We shot it a few times and although I’m pretty fit, I did get tired out!’

And talking about how  she prepared to play a future superhero.

She said: ‘I am already very athletic and do a lot of running and horse riding, so physically I didn’t have to prepare much, but I did receive dialect coaching and sword training.

‘This was super fun and Nat and Alan who taught me were fantastic!’ 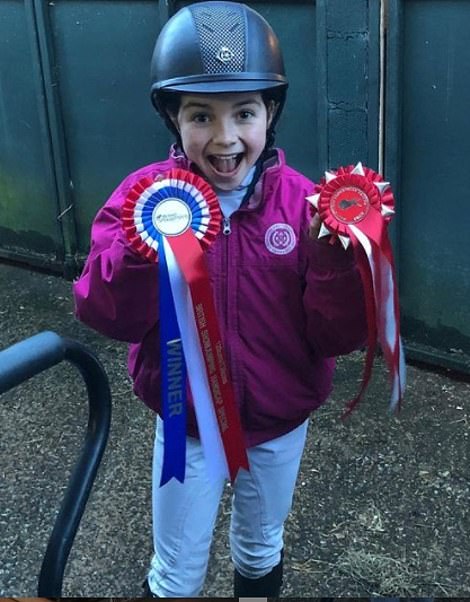 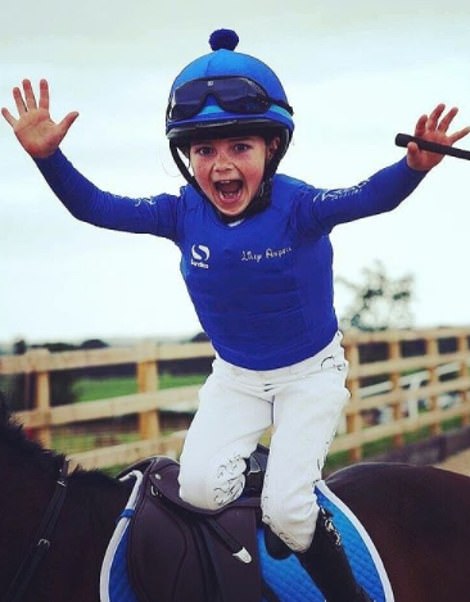 She did it! Lilly posted this snap of her rosettes after one successday day of showjumping and wrote: ‘Winner, winner, chicken dinner’ 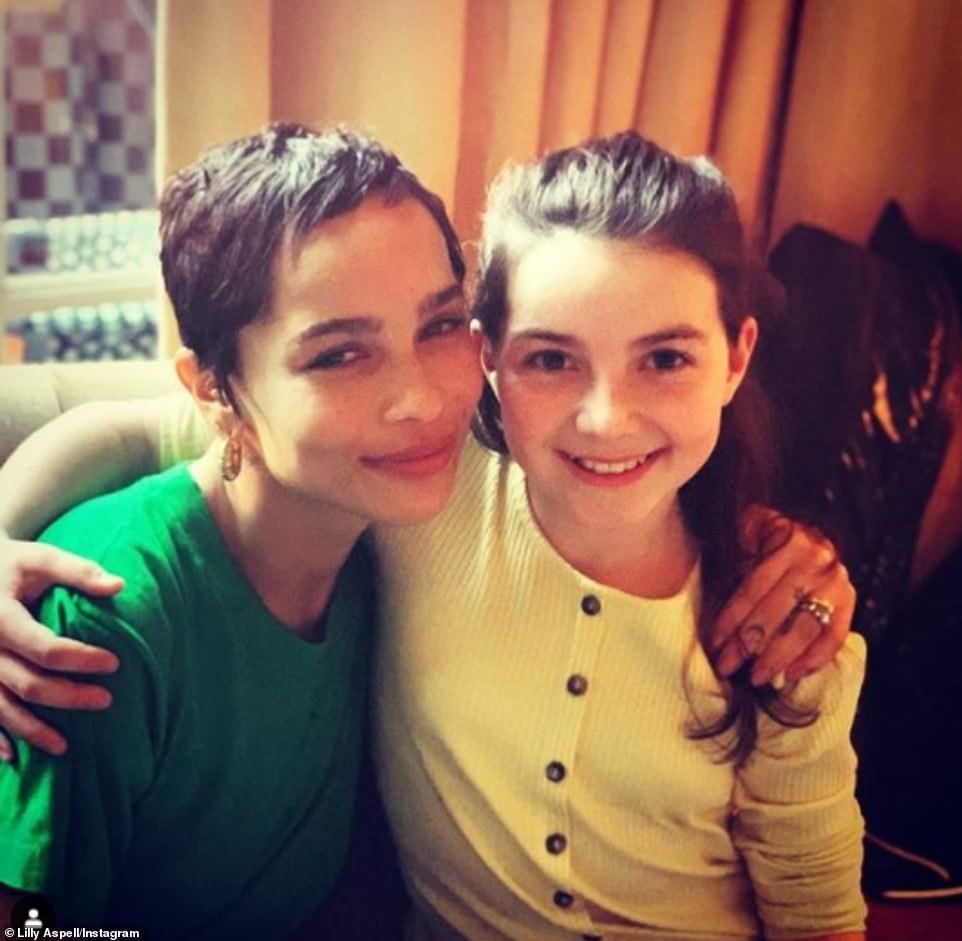 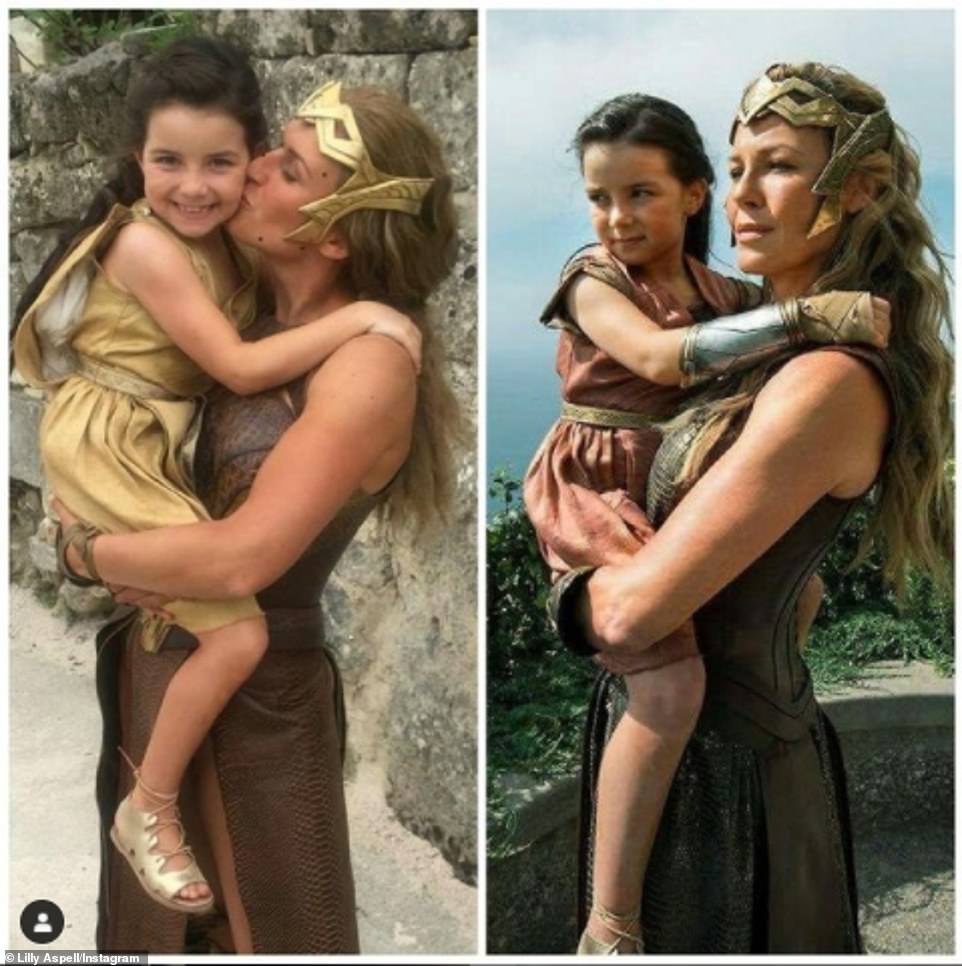 Getting along nicely: Lilly pictured with Danish actress Connie Nielsen on set – she said: ‘Connie was so professional and has an amazing aura surrounding her. She helped me relax as my first days filming was with her and it was pretty nerve-racking!’

She also loves to engage in a little off-road motorbike racing and shared a picture of herself in her racing gear and on her bike, writing: ‘Having so much and being very safe with my new toy #readytorace.’

When she’s not being a movie star or engaging in her favourite sporting activities, Donna attends high school, just like everyone else.

Her mother, Donna Caldwell shared a sweet picture of her on her Instagram page on her first day at secondary school, writing: ‘Obligatory back to school photograph (Better late than never). #proudmummy’.

The pair are incredibly close and Lilly even wrote on one picture of the two of them together: ‘#FiercefemaleFriday. My mum. No matter how much I say I love you, I always love yo more than that.’ 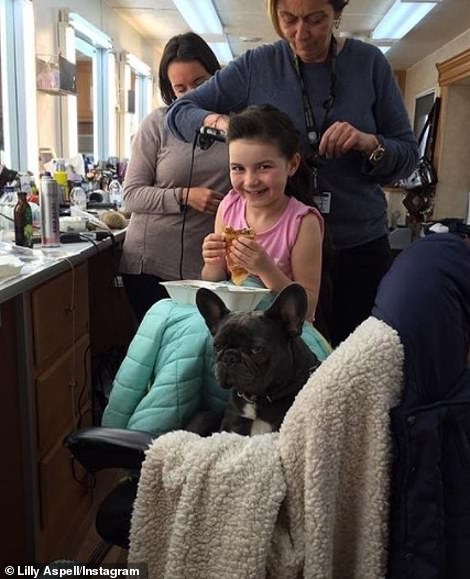 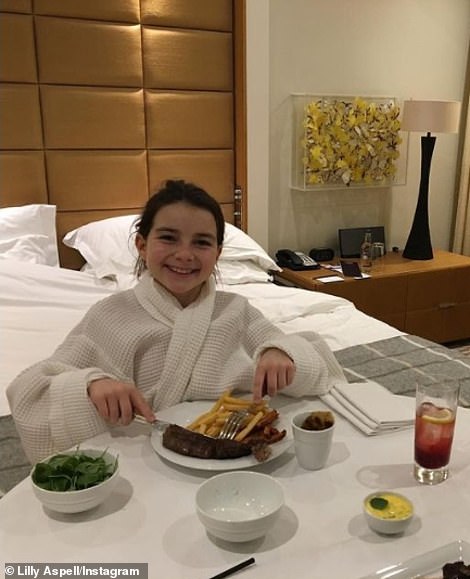 Every girl’s dream: The young star backstage in hair and make-up (left) and treating herself to some fancy room service (right) 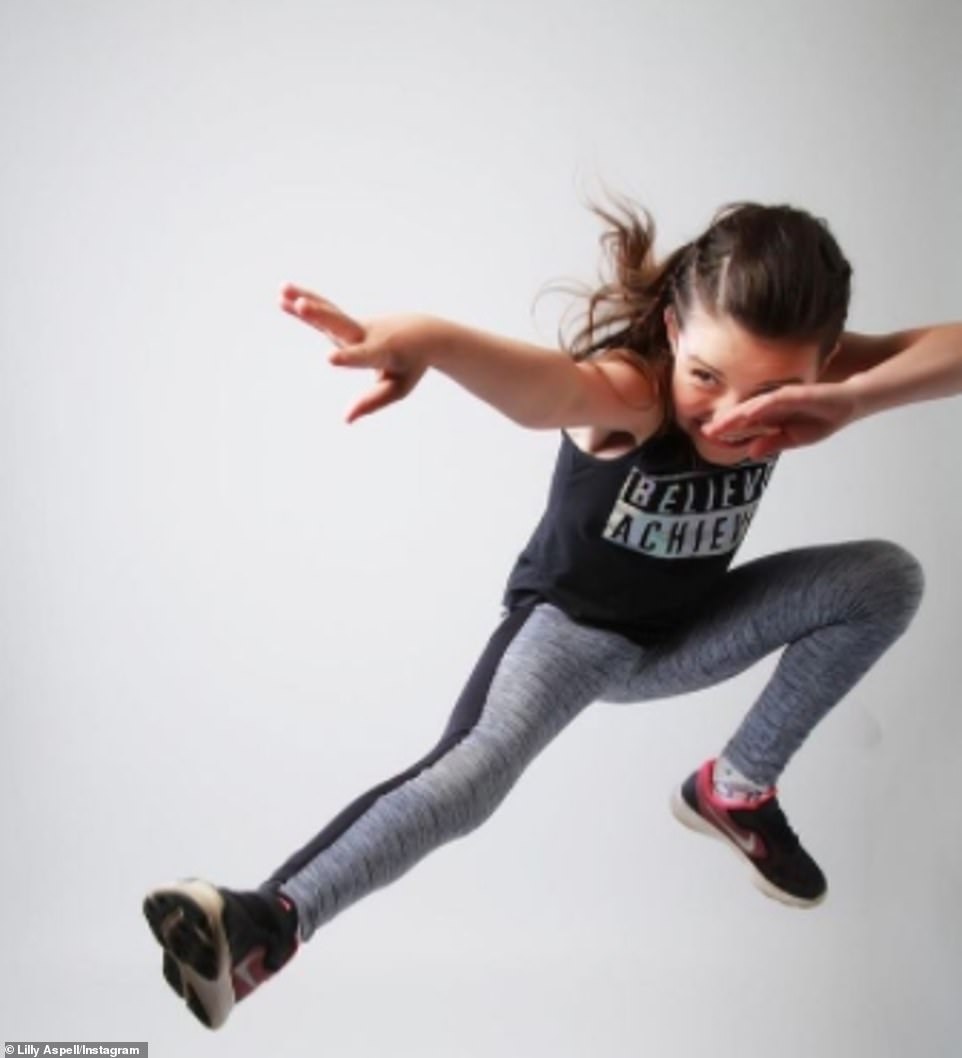