Married at First Sight Australia is set to premiere its eighth season next month.

But it appears, two brides are already enjoying the spotlight ahead of their debut on the dating show.

Booka Nile and Alana Lister, who are both set to star on the new season of the show, showed off their incredible curves as they enjoyed a beach outing in Perth.

Meet your new busty brides: Married At First Sight 2021 participants Alana Lister, 30, (left) and Booka Nile, 31, (right) show off their VERY ample assets in tiny bikinis during a day at the beach

Booka flaunted her figure in a black bikini as she soaked up the sun with her co-star.

The 31-year-old, who is a singer in Perth based-band Make Them Suffer, looked every inch the stylish rockstar as she completed her look with sunglasses and earrings.

Brooka also showed off her impressive tattoo collection, including a monkey reading a book on her shoulder and rose garland on her back. 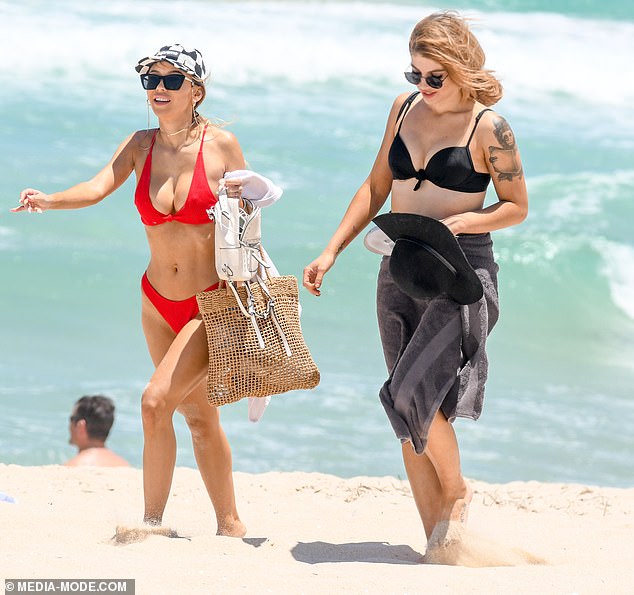 Friends: The two reality TV brides appear to have already formed a friendship as they were spotted showing off their ample assets during a beach outing together 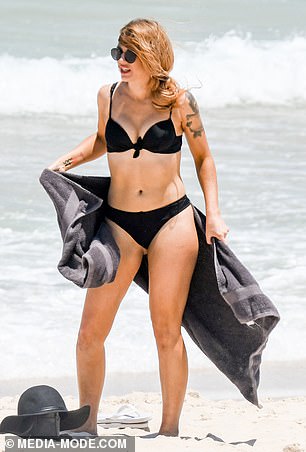 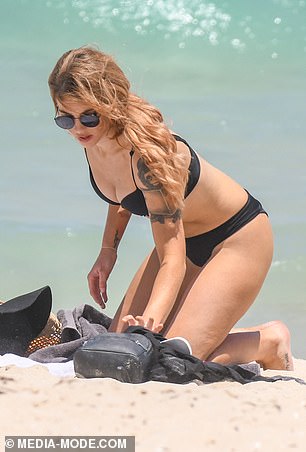 Ready to make her TV debut! Booka, a singer in Perth based deathcore band, Make Them Suffer, showed off her incredible curves in a black bikini during the outing

She was joined by fellow bride Alana Lister, who set pulses racing in a plunging red bikini.

The 30-year-old Brisbane based school teacher put on an eye-popping display in the skimpy two-piece.

She completed her chic beach look with oversized sunglasses which featured a gold chain and a black and white Supreme hat. 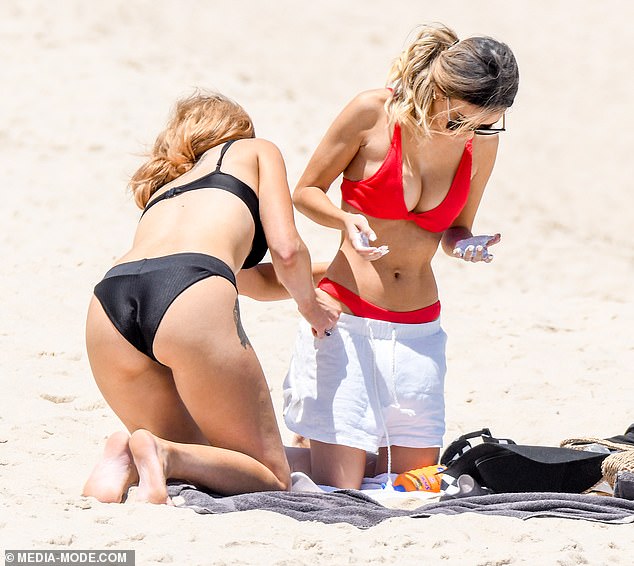 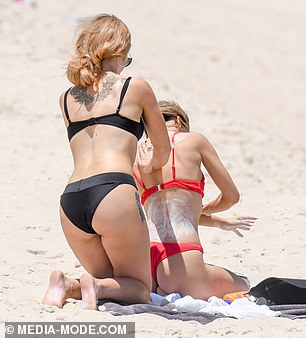 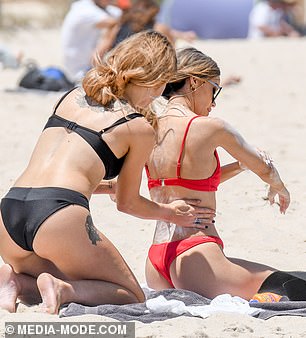 Sun’s out, bun’s out! Her copper coloured locks were loosely tied in a bun 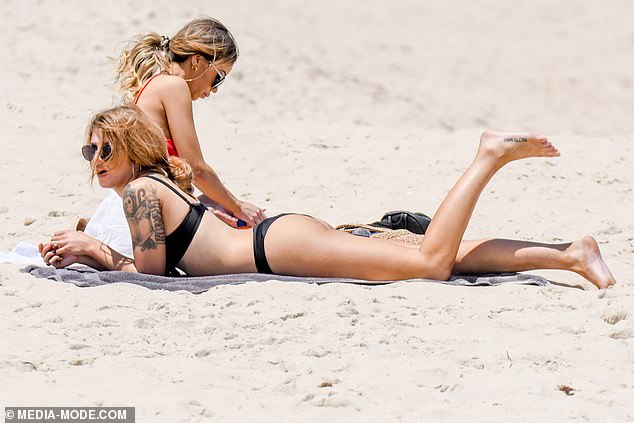 Inked: The soon to be bride showed off her impressive tattoo collection, which included a monkey reading a book on one shoulder and rose garland on her back

Upon arriving at the beach, Alana was seen carrying an oversized beach bag, a towel and white backpack.

Once settled, the beauties were seen laying down and relaxing on the sand as they chatted.

Both brides were seen wearing their massive rings, suggesting that Booka and Alana both found love during the Channel 9 experiment filmed last year. 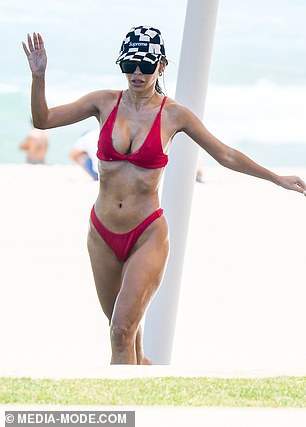 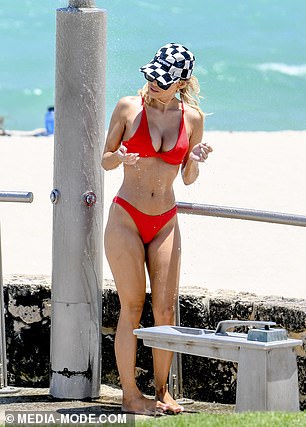 Company: She was joined by Alana, a Brisbane based school teacher who put on an eye-popping display as she swapped her usually reserved outfit choices for a two-piece 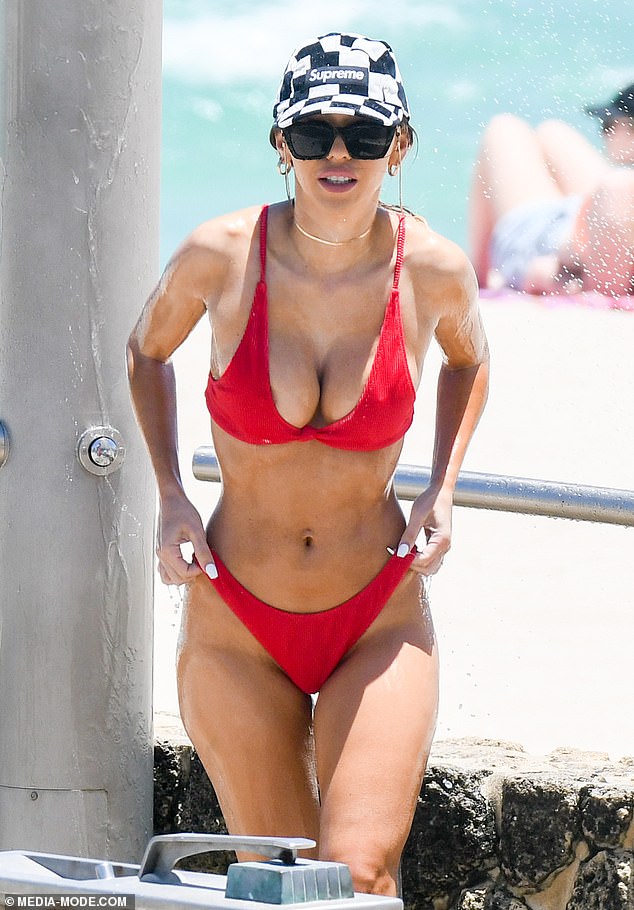 Giving her groom an eyeful! Alana gave onlookers an eyeful as she was spotted showering following a dip in the ocean 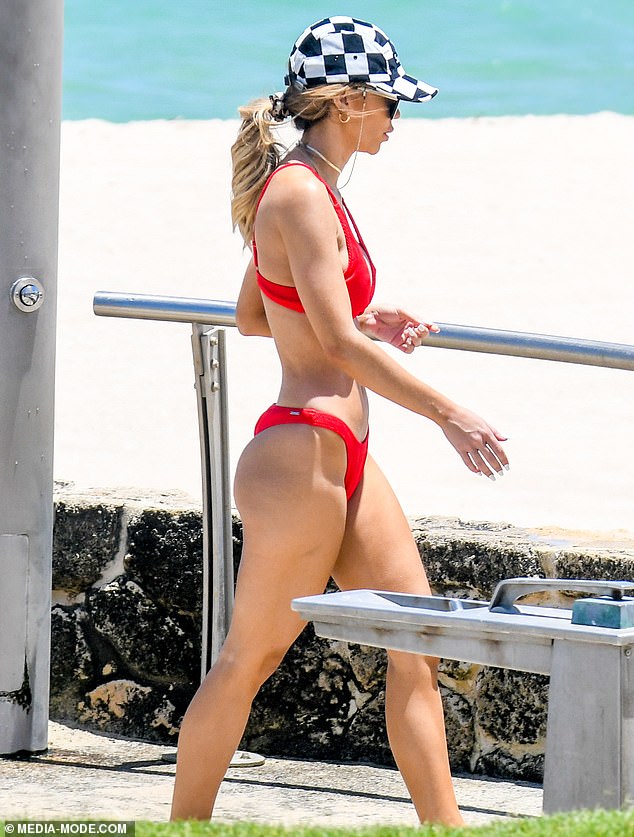 At one point Booka was seen rubbing sunscreen on her co-star’s back.

Brett has spent the past four years doing volunteer work at the Salvation Army as a meal server and support worker. 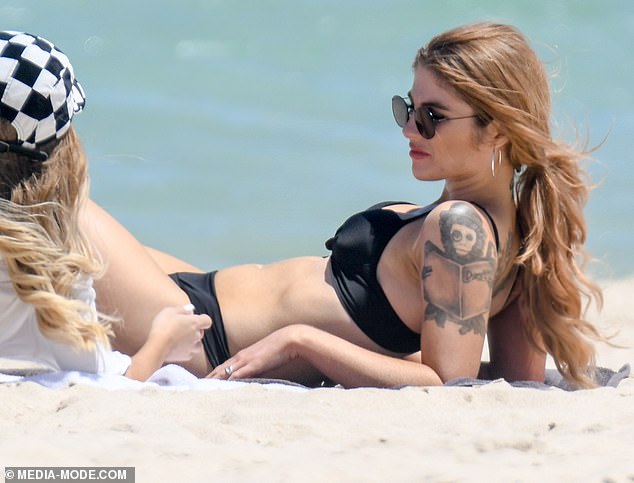 Both brides were seen wearing their massive rings, suggesting that Booka and Alana found love during the Channel 9 experiment filmed last year 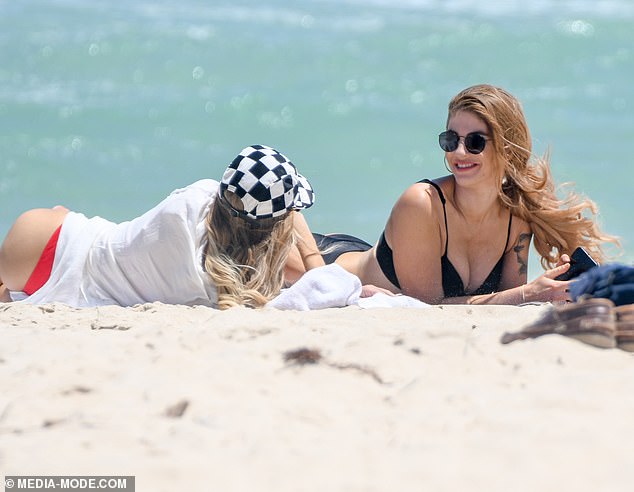 Chill: Booka and Alana appeared relaxed as they casually chatted to each other during the outing 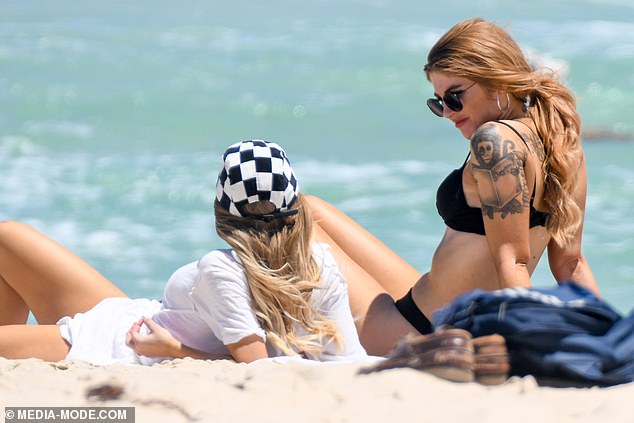 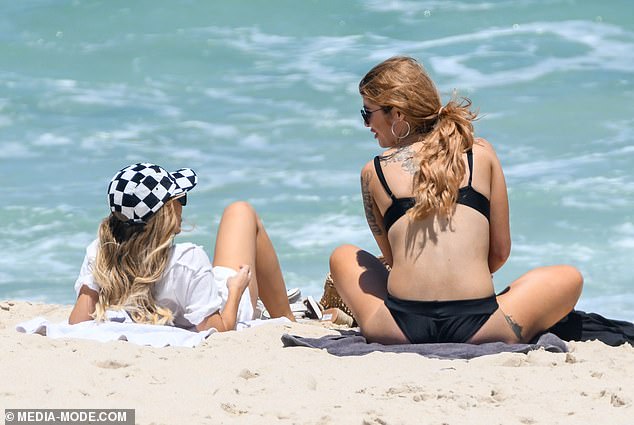 Famous: She already has a cult following, having toured around the world with her metal band 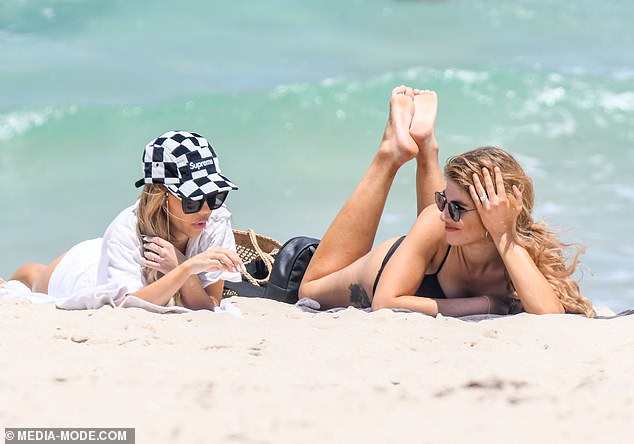 Newlyweds: Both brides have already filmed their weddings

Meanwhile, Alana, is set to walk down the aisle with Brisbane tradie Jason Engler.

While little is known about Alana’s private life, the soon-to-be reality star has been teaching both primary and college students since at least 2014. 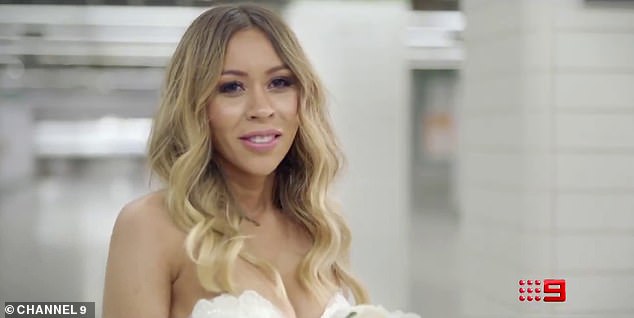 Looking for love: Alana features heavily in the show’s new trailer catching a train in a wedding dress in hopes of finding her Mr. Right 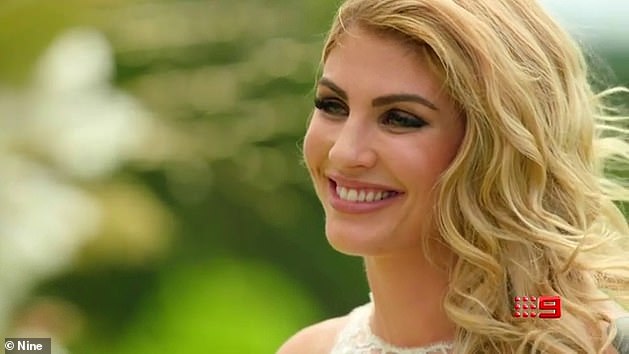 Similarities: In a newly released trailer, Booka admits that both she and her groom are ‘crazy enough’ to marry someone they have never met

Channel Nine recently described this year’s cast the most genuine participants yet, and said that the 2021 series was ‘about finding love, not fame’. 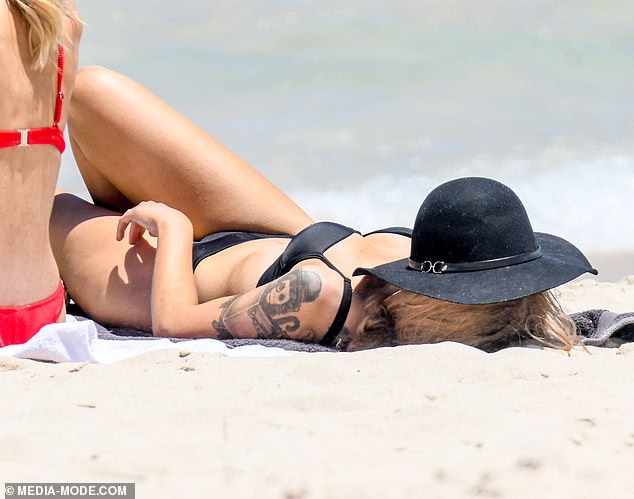 Over it! At one point Booka appeared to have enough of the soaring sun and covered her face with a black hat 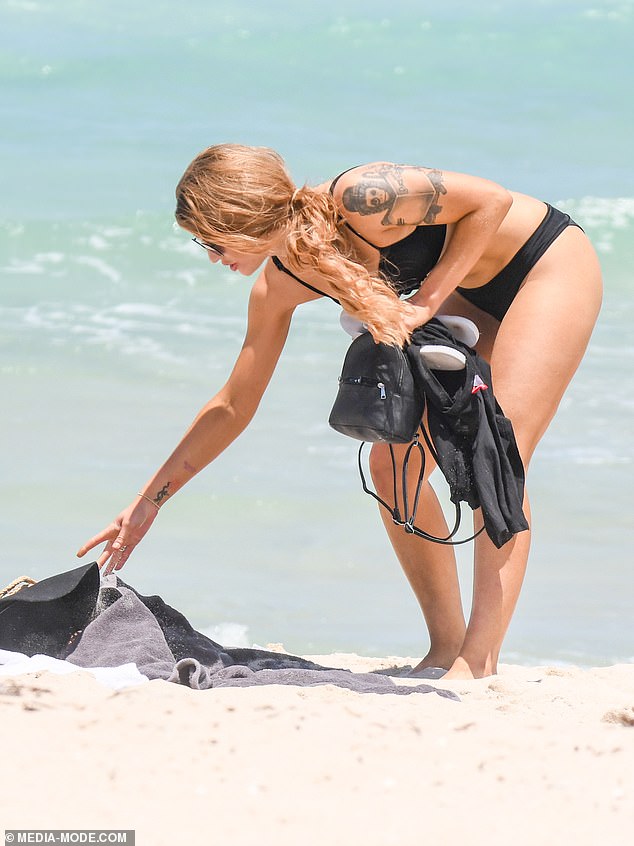 Bye bye! Following their beach date, Booka was seen picking up her belongings