A photographer has claimed the side effects of her contraceptive implant sparked her eating disorder – and led to her weight plummeting to seven stone.

Meg Freeman, 27, from Hertfordshire, described how she suffered from mood changes and aggression after having the implant inserted into her arm.

She said the side effects got progressively worse over the course of three months, with doctors removing the implant last September.

However, Meg explained she became ‘obsessed’ with exercise, running every day, as well as going to the gym for two hours a day, four times a week.

The photographer’s intense exercise regime saw her weight drop to 7st 3Ibs, while she became a UK size four.

Her eating disorder was diagnosed by a private doctor in January, with the warning that she could be doing lasting damage to her body helping to spark her recovery.

Meg Freeman, 27, from Hertfordshire, says the side effects of her contraceptive implant triggered her anorexia battle that saw her weight drop to 7st. She is pictured here on holiday in the grips of eating disorder

Meg (pictured on holiday while in recovery) was diagnosed with anorexia in January, with doctors warning her that she was at risk of doing long-term damage to her body

Meg, who now weighs 8st, explained how she believes the side effects of her contraceptive implant triggered her eating disorder.

‘It started in September 2017 and got progressively worse. I believe it stemmed from side effects from the contraceptive implant,’ she explained.

‘I suffered from side effects throughout the summer of 2017 including aggression and mood changes for the three months I had the implant.

‘For me, it was never about being “thin” and I have never had any issues with body image. There were no other life changes that could have triggered it.’

Meg (pictured left, during the grips of her anorexia, and right, during recovery) described how she suffered from mood changes and aggression after getting the implant 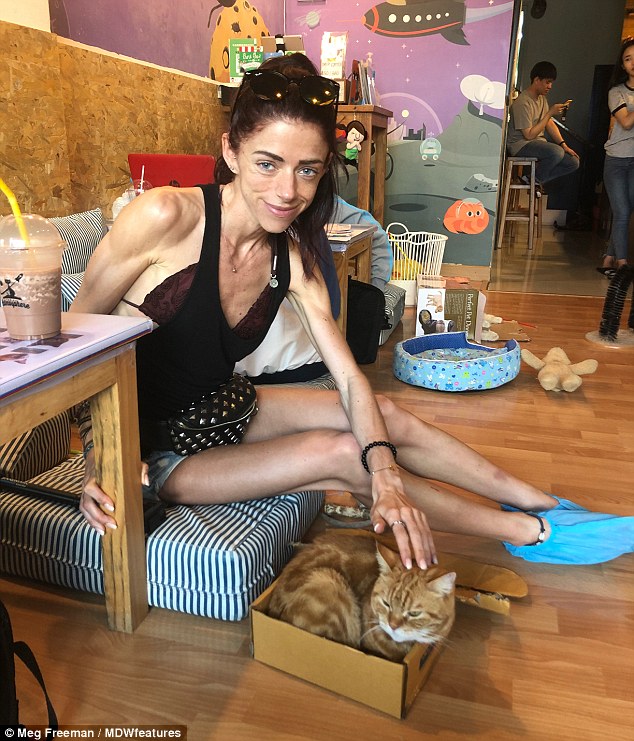 Meg (pictured in the grips of her eating disorder) described how she began to be obsessed with being fit and healthy, running every day and pushing herself to the limit at the gym

Meg, who has been sharing her story on Instagram (@sprint4chocolate), explained how she became ‘obsessed’ with becoming fit and healthy, pushing her body to the limit.

‘It was about being the best with my fitness and my idea of “perfect”. I decided one day that I wanted to be healthier and train for a half marathon,’ she said.

‘I started just eating more healthy foods and avoiding cake or chocolate and as the months went on, I became more and more strict with my diet and exercise regime.

‘Throughout this period, I had a low mood, I was depressed, not enjoying things that I used to. It took me a long time to admit I had an issue as people were still complimenting me at the gym,’ she said.

‘I am still in recovery, but it has already changed my perception of mental health. I used to think that anorexia was about being thin and not eating.’ 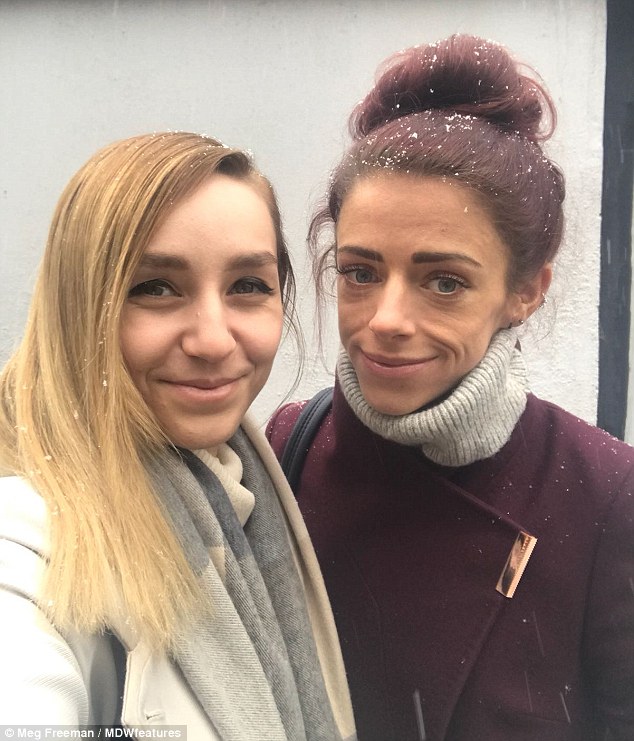 Meg (pictured with a friend while suffering from anorexia) saw her weight plummet to just over seven stone. She described how friends and family became concerned about her appearance

Meg (pictured in the grips of her eating disorder) said she thought that people were ‘jealous’ of her commitment to fitness at first, before eventually realising she had a problem

Meg said doctors warned her that she could be doing long-term damage to her body, including affecting her menstrual cycle.

WHAT IS THE CONTRACEPTIVE IMPLANT?

The contraceptive implants are matchstick-sized tubes which are inserted under the skin of the arm.

They last for three years and work by releasing a steady dose of the hormone progesterone. This prevents ovaries from releasing an egg every month and also thickens the lining of the cervix – preventing sperm from entering.

In addition, it thins the lining of the womb, making it less likely that a fertilised egg can implant.

In rare cases the implants have been inserted incorrectly and travelled to the lungs or major veins.

Experts say they are 99 per cent effective and far more reliable than remembering to take the Pill or using a condom. They take only a few minutes to be fitted and girls are given a local anaesthetic.

‘Doctors warned me an imbalance of hormones due to having such a low body fat percentage. I was worried that it would affect my chance to have children,’ Meg said.

‘However luckily I started my recovery before any lasting damage was done and my hormones are now returning to normal.

Meg says her urge to exercise caused issues in her personal life, with her fiancé left concerned about how much time she spent running.

However, strangers complimenting her look at the time caused her to feel confident and she never fully came to terms with her condition until January 2018.

‘Before I started recovery, I was working out at the gym four-times-a-week for two hours a session and running three-times-a-week,’ she said.

‘Before I knew it, each run had to be faster than the one before. I ran thirteen miles in one-hour and thirty-four minutes and it still wasn’t fast enough. I pushed myself more and more.

‘Around November 2017, people started getting concerned about my appearance. “Too skinny” comments were made, and my family were getting worried. 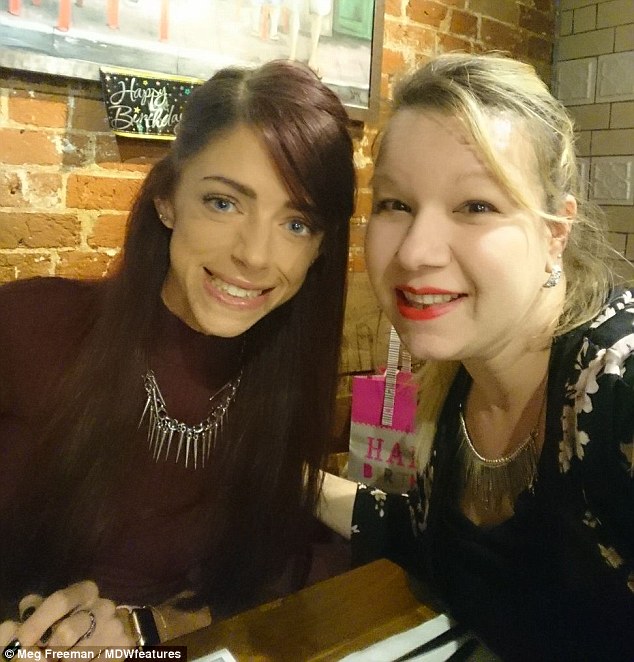 Meg (pictured in a restaurant during her battle with anorexia) described how she would check menus of restaurants beforehand, to make sure there was something healthy for her to eat

Meg (pictured while in the grips of anorexia) described how she continued to receive compliments at the gym, which stopped her recognising she had a problem at first

‘I reassured them and said I was fine, my body genuinely felt great, and I had plenty of energy for my fitness. I actually thought that people were jealous of my commitment to fitness and health.’

She added: ‘Then I started to feel down, low mood and took little pleasure in doing things. My life revolved around fitness and eating healthy.

‘I checked menus of restaurants before I went out for dinner, to make sure there was something healthy for me to eat, it was all I could think about.

‘So why was everyone around me aware of my illness but I wasn’t? Why did it take me so long to realise that I was slowly killing my body? When did it actually hit me? 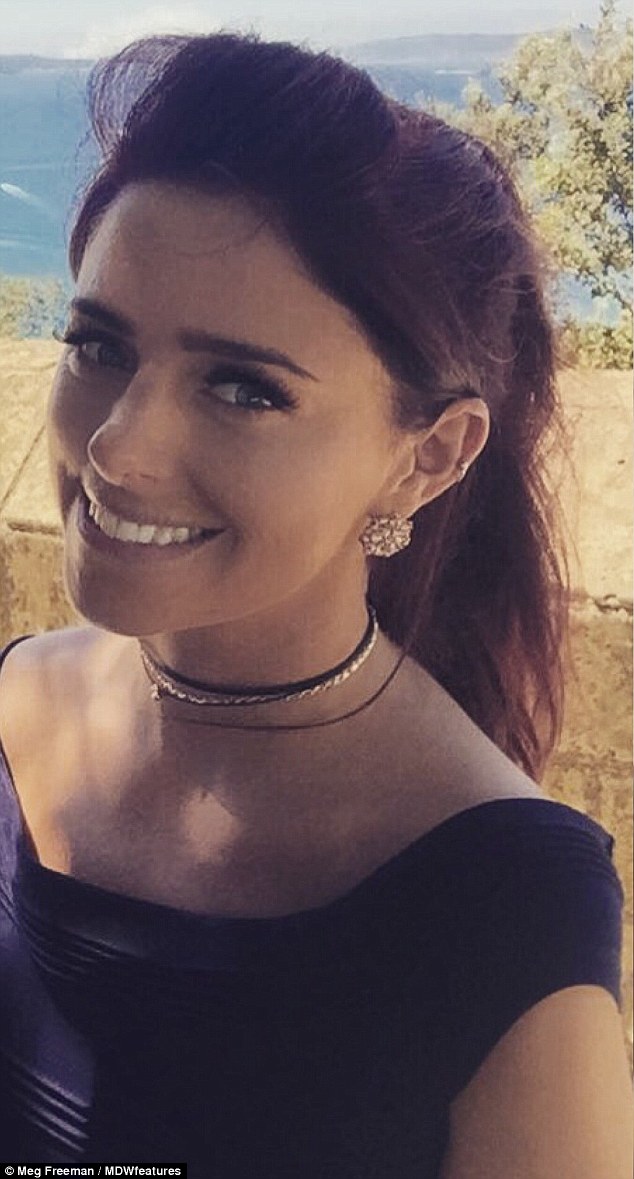 Meg (left, during her anorexia battle, and right, during recovery) says she doesn’t feel ‘obsessed’ with fitness anymore

However, Meg said she finally realised she had a problem when she went to a doctor’s appointment with her mother.

She recalled: ‘Then one afternoon, at a private appointment with my mum, I sat across from a doctor; he looked at me and said, “Well Meg, you have anorexia, and you’re going to have to fight through hell and fire to get rid of it.”

‘I knew I was ill, but people were still coming up to me in the gym and asking what my secret was. “Wow you must be a runner, you’re so lean!” and “I wish I had your figure.” 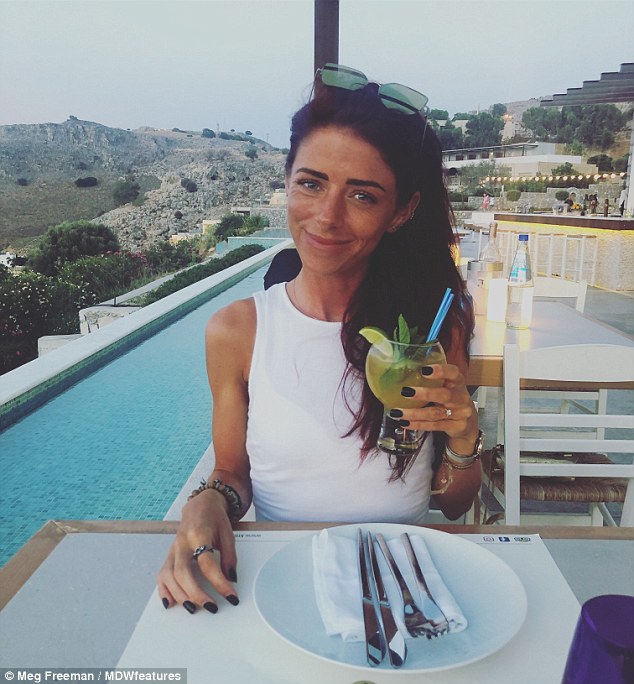 Meg (pictured on holiday in the midst of her anorexia battle) says her anorexia began after she began suffering mood swings, which she puts down to getting the contraceptive implant 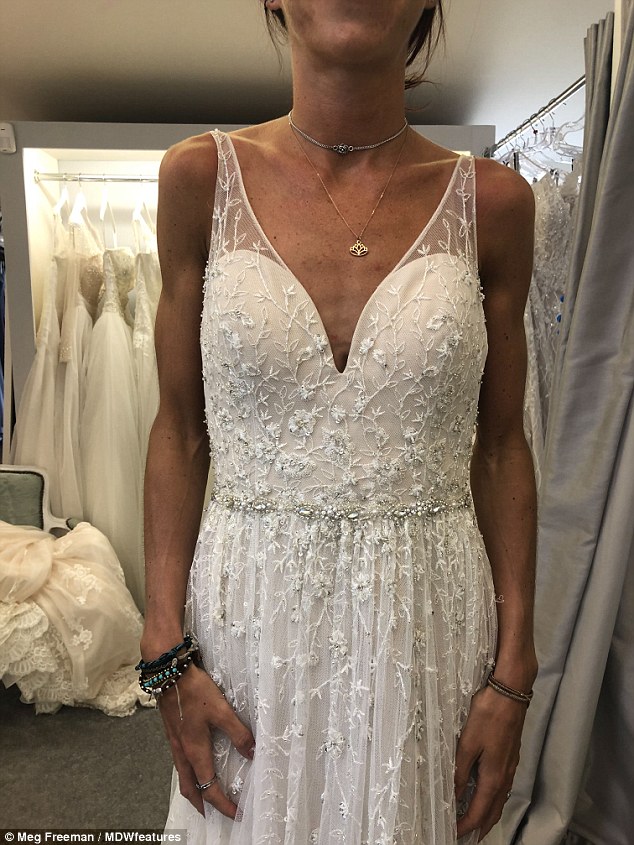 ‘I would nod and smile, but think, “Yes I’m so lucky, I only had to sacrifice my hormones, my social life, my peachy bum and mental wellbeing, but hey at least I’m lean!”

Meg said she now feels much better, but admitted that the road to recovery has been difficult.

‘I feel like myself again. I no longer feel down or obsessed with fitness. My partner is proud of my progress and is happy that we can eat pizza together again,’ she said.

‘My family say I look a lot better and my mum says she is proud that I’m not running marathons anymore.’ 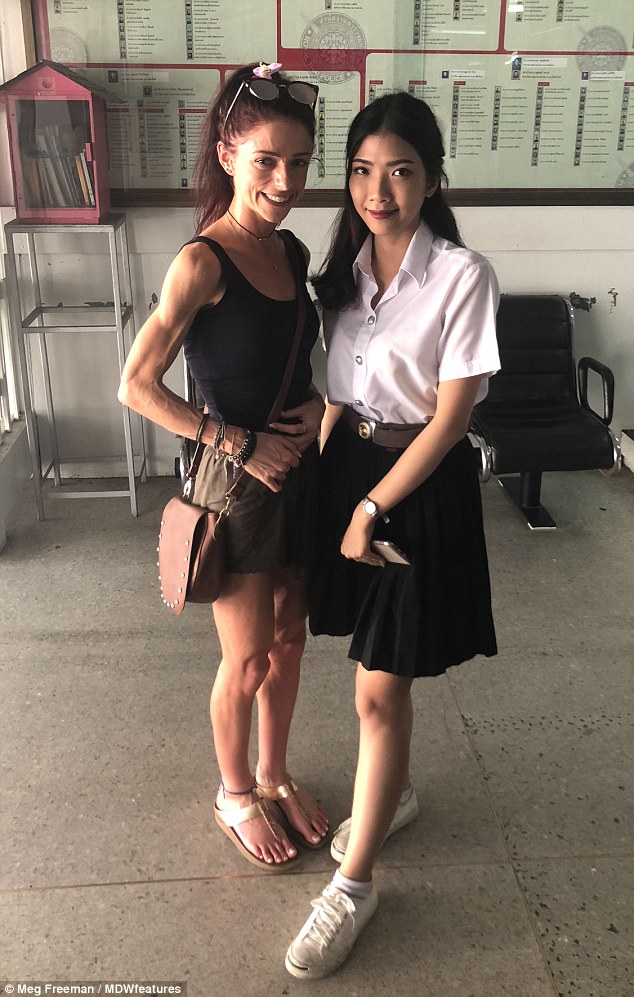 Meg (pictured with a friend during her anorexia battle) saw her weight plummet to seven stone, with friends and family quickly expressing concern 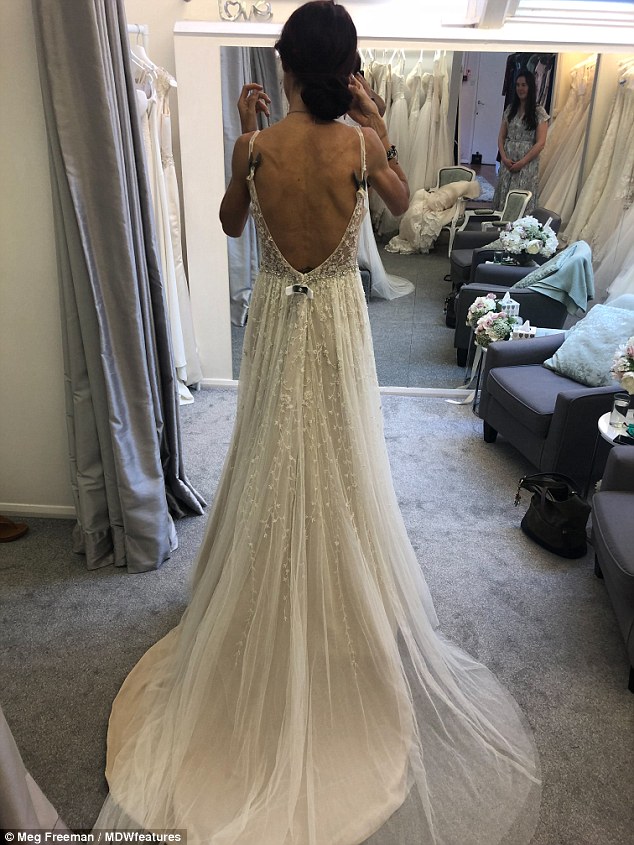 She added: ‘It was also very difficult with family, most people believe it is as simple as “just eat more'”but unfortunately it’s much more than that.

‘For me, the most difficult thing was giving up the gym and running.. I have always enjoyed running mud races and going to the gym after work.

‘I felt very alone when I first started recovering, there is not a lot of help or advice available and GPs don’t seem to recognise the symptoms if you don’t fit the stereotype and your BMI isn’t low enough.

‘An obsession with health and fitness could easily lead to an eating disorder. If you feel like it is taking over your life, then take a break and let your body rest.

‘Now I run once a week for about three miles, I go for walks with my partner and no longer feel the need to exercise because I’ve eaten loads of food.

‘I run because I enjoy it, not because I earned it! I will start weight training again once my weight increases.’