Megan Fox was pictured taking her kids on a trip to Color Me Mine in Los Angeles on Saturday afternoon.

The 35-year-old appeared to be enjoying her time with her children at the painting studio while being accompanied by her boyfriend, Machine Gun Kelly, who appeared preoccupied with a phone call.

The Transformers actress shares her sons Noah, Bodhi and Journey, aged eight, seven and four, with her estranged husband, Brian Austin Green, from whom she separated last year.

Family outing: Megan Fox was accompanied by her boyfriend, Machine Gun Kelly, while taking her children to Color Me Mine in Los Angeles on Saturday

Fox was dressed in a light gray sleeveless shirt that conformed tightly to her chest and midsection during the outing.

She paired her top with a slightly loose-fitting and distressed pair of blue jeans as well as a set of white sneakers.

The Jennifer’s Body star accessorized with two silver necklaces as she spent time with her children and boyfriend.

Her gorgeous brunette locks gracefully fell onto her chest and back as she made her way out of the painting studio. 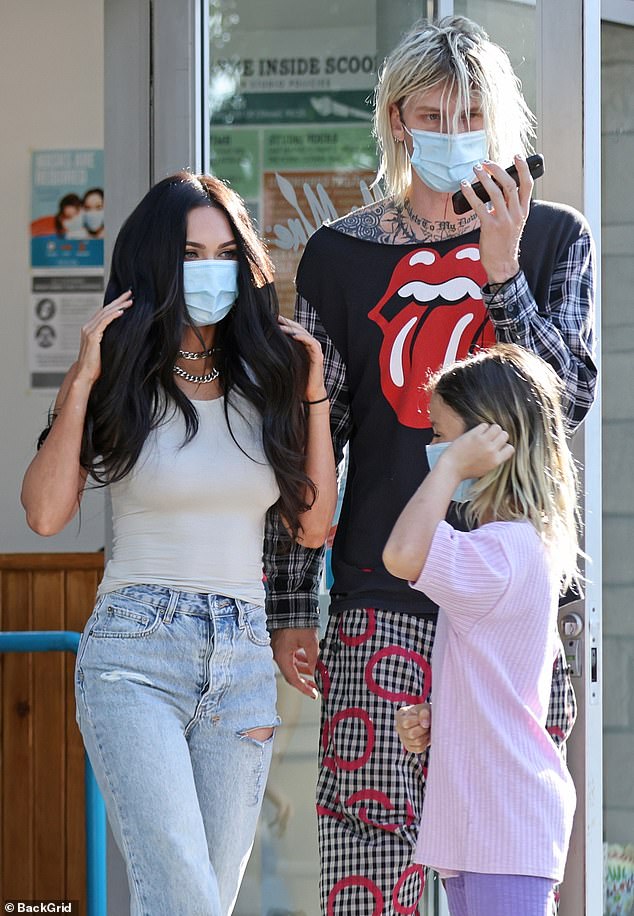 Casual ensemble: The Transformers actress sported a light gray sleeveless top and a pair of slightly distressed blue jeans during the family’s outing

Kelly, 32, appeared to be taking it easy during the outing, as he wore a t-shirt that featured a Rolling Stones logo on the front and flannel sleeves.

The rapper added to his eye-catching ensemble with a pair of checkered trousers with multiple red circles on both pant legs.

His long blonde hair fell downward towards his face, and he also wore a set of platform Converse sneakers.

Fox, her children and the hitmaker, born Colson Baker, all wore matching facial coverings to keep themselves protected from COVID-19. 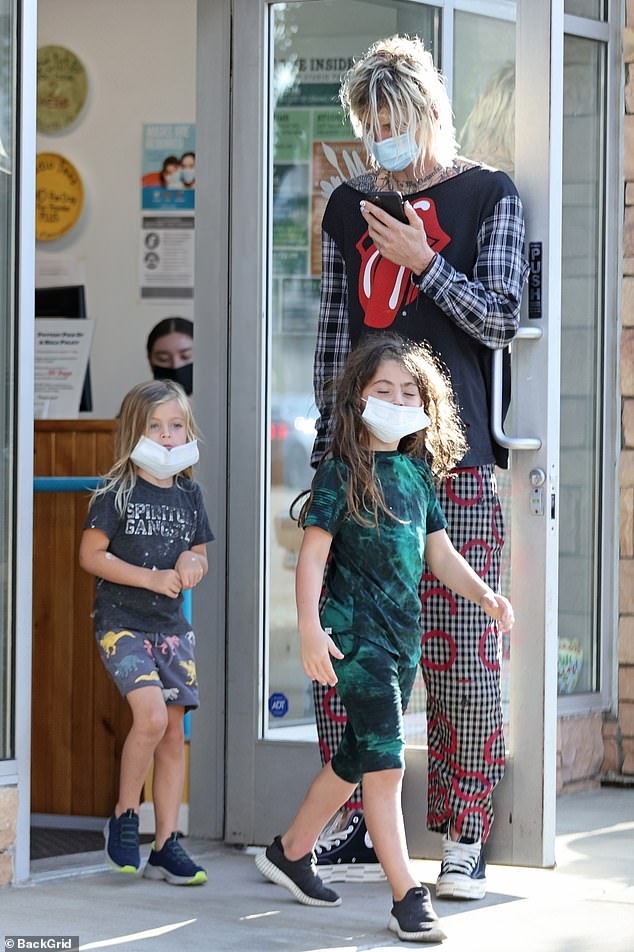 The actress and the songwriter first met on the set of the upcoming feature Midnight in the Switchgrass, in which they will appear.

Before she met the rapper, the performer was in a long-term relationship with Green, 48, to whom she was initially linked in 2004.

They first announced that they had become engaged two years after their first meeting and eventually tied the knot in 2010.

The former couple went on to welcome their sons in 2012 and 2014, respectively, and Fox served as a stepmother to Green’s older son Kassius. 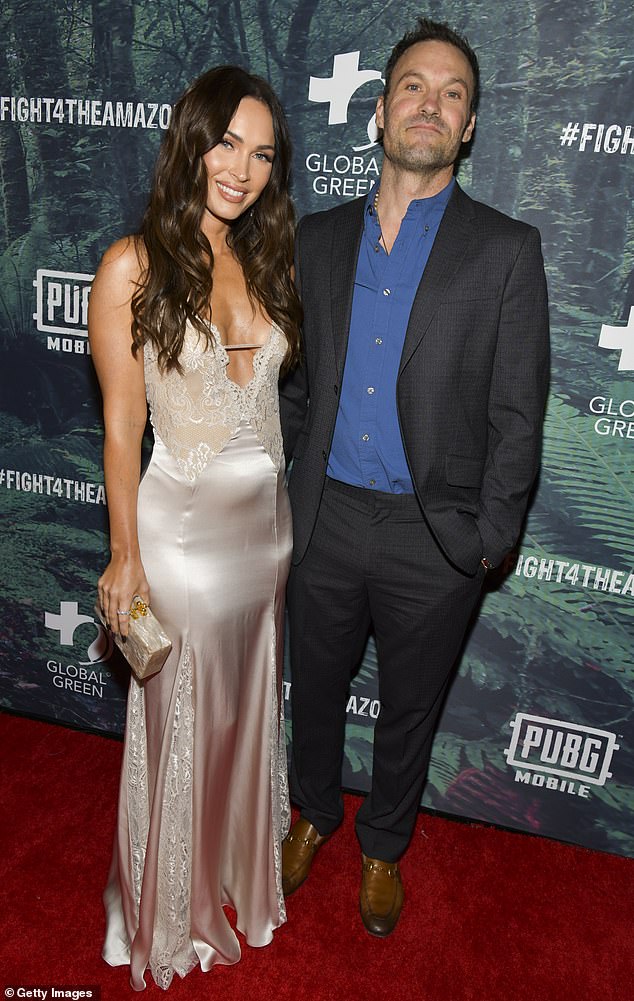 Former couple: Fox shares her three children with her estranged husband, Brian Austin Green; they are pictured in 2019 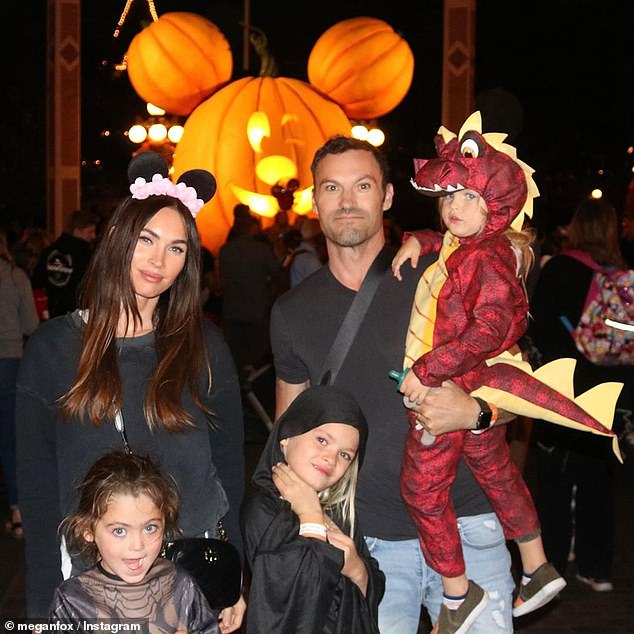 Longtime couple: The two were initially romantically linked in 2004 and went on to tie the knot in 2010 before welcoming three children

The couple separated in 2015 when the actress filed for divorce for a second time, although they ended up reconciling the following year and went on to add their youngest son to their family.

Fox called off the proceedings in 2019 only to file to end her marriage last year.

She went on to appear in the music video for his 2020 single My Bloody Valentine, sparking rumors that they had been getting closer following her separation from Green.

Kelly later confirmed that he was in a relationship with the actress last June, and they went Instagram official the following month. 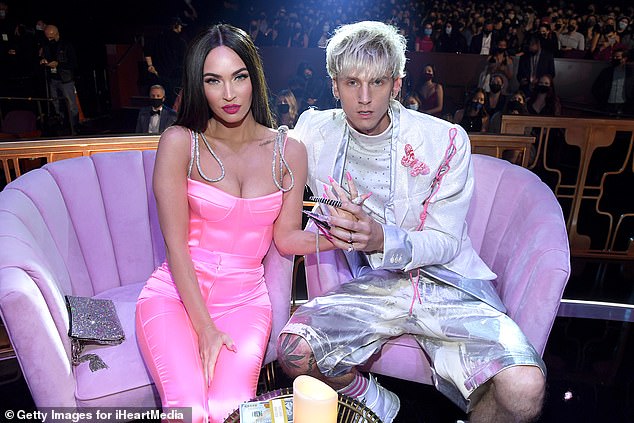 Costars: The performer met Kelly during the filming of the upcoming feature Midnight in the Switchgrass; they are seen at the 2021 iHeartRadio Music Awards

During an interview with Nylon, Fox spoke about the moment where she came to realize that she was meant to be with the rapper.

Specifically, she recalled: ‘I looked into his eyes [and] I felt the most pristine, most gentle, most pure spirit. My heart shattered immediately and I just knew that I was f***ed.’

The performer went on to note that her boyfriend had a certain quality that made him irresistible and that she was especially taken with his personality.

‘The intensity of merging with him is just overwhelming, and the threat it poses is so powerful but so beautiful that you have no choice to surrender with reverence and with gratitude,’ she said. 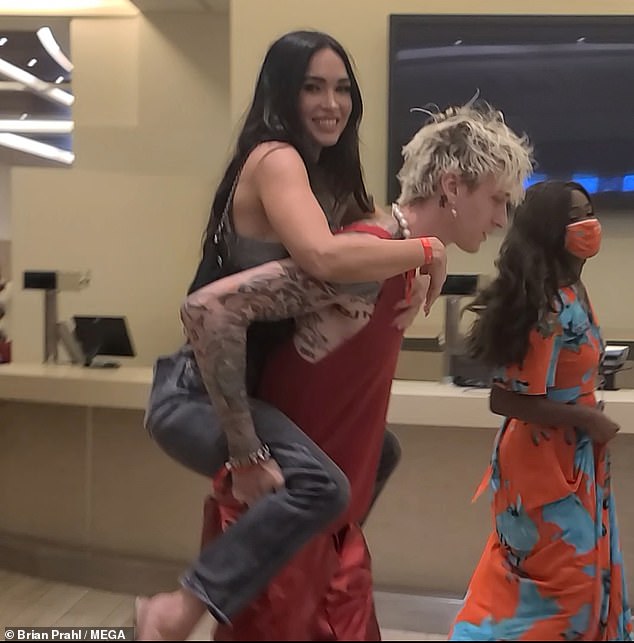 Strong feelings: During an interview with Nylon, Fox expressed that her ‘heart shattered immediately’ when Kelly looked into her eyes for the first time