Megan Thee Stallion is no stranger to flaunting her curves in front of the camera, often decked out in edgy ensembles.

And on Saturday the 26-year-old Savage rapper gave her 25.5 million Instagram fans and followers plenty to feast on dressed in a revealing white outfit complete with a bustier adorned with an array of leather straps, belts and golden buckles.

In all, she struck a pose in seven selfie snaps, which included everything from a sexy seductive stare to a more playful tone for the camera, all while writing, ‘Boo,’ in the caption, along with a cute white ghost emoji.

Revealing: Megan Thee Stallion, 26, gave her 25.5 Instagram fans and followers plenty to feast on in a series of snap decked out in a sexy white ensemble

For added touches, Megan (born Megan Jovon Ruth Pete) wore sheer white gloves that covered her entire arms, all the way up to the top of her shoulders, and a choke collar that matched the belt sequence on the bustier.

The Texas native decided to throw in a bit of color contrast by wearing golden, open-toe heels that had straps along the top of her ankles. 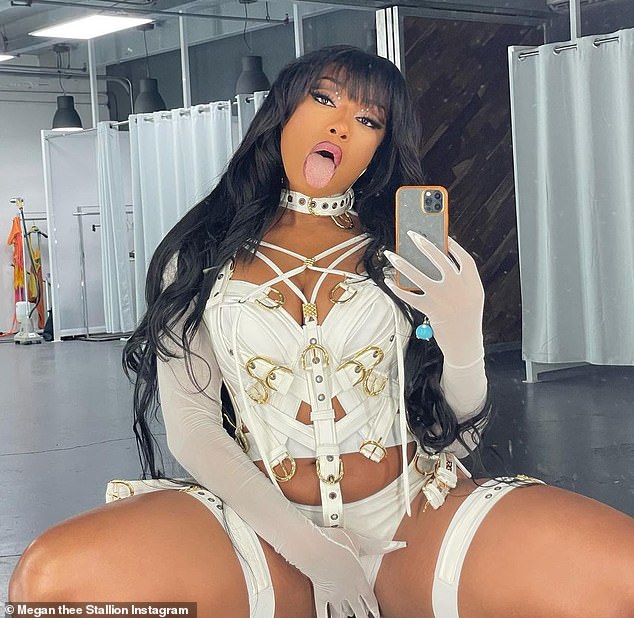 Playful: The outfit complete with plenty of white leather straps and belts and golden buckles and bikini-style bottoms 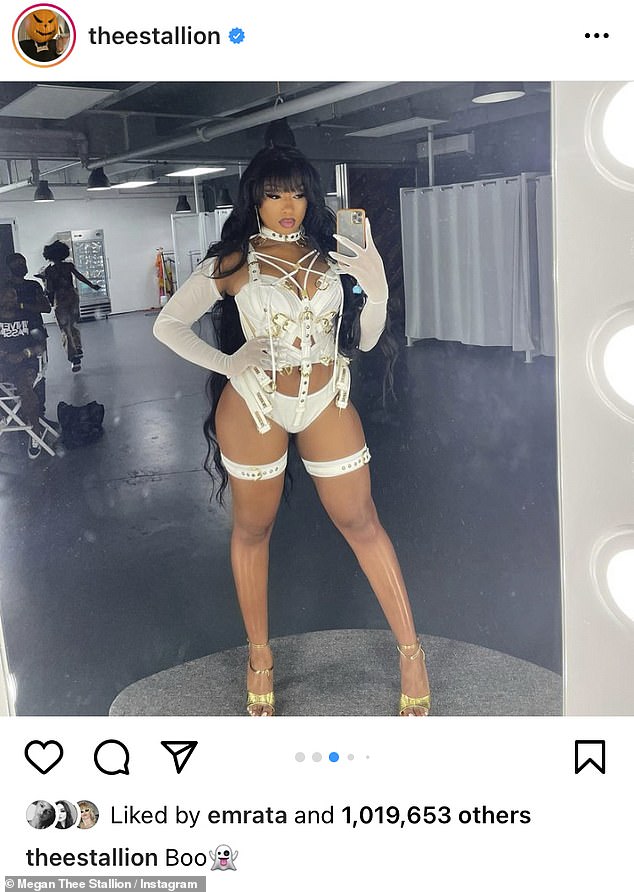 Cutesy: The rapper got cute with her social media fans and followers and simply wrote, ‘Boo,’ in the caption, along with a white ghost emoji

And on this day, she opted to wear her long raven tresses straight and flowing past her waist with plenty of volume and major bangs.

While she sat in a chair for several of the photos, the Hot Girl Summer star also stood up for full-body reveals, which included her leaning forward in a busty move.

The series of snaps appears to have been taken in some sort of studio or dressing room, possibly during a break from her recent gig at Austin City Limits Music Festival in Austin, Texas on Friday. 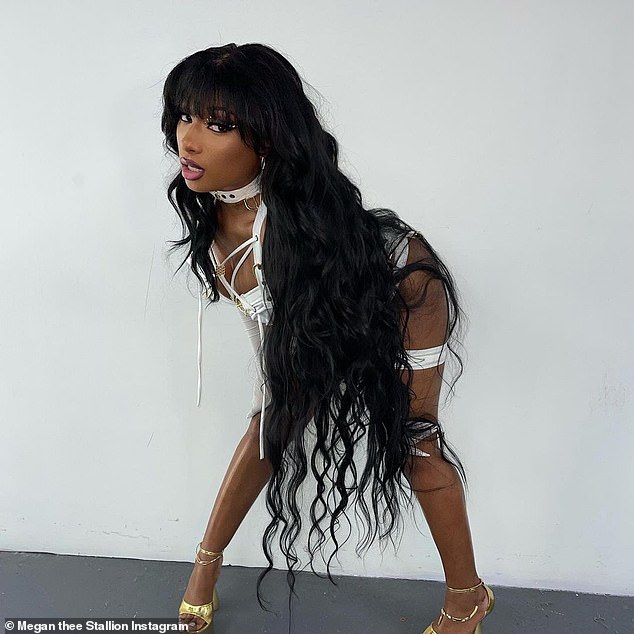 While she sat in a chair for several of the photos, the Hot Girl Summer star also stood up for full-body reveals, which included her leaning forward in a busty move 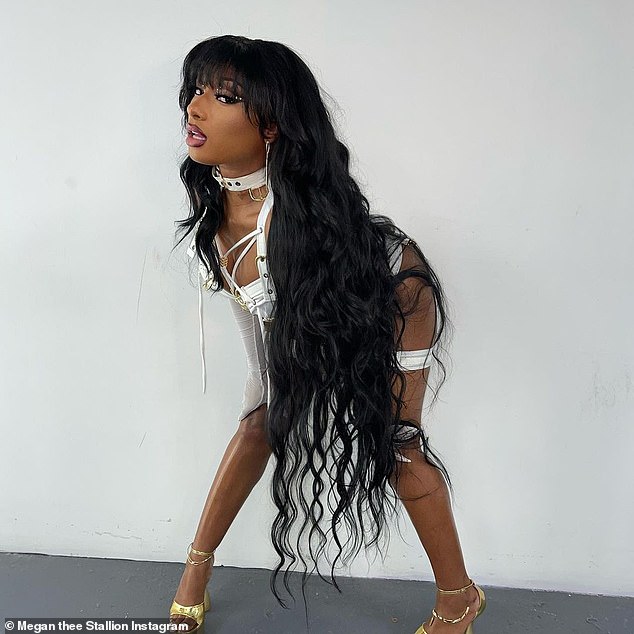 Megan has been out promoting her debut studio album, Good News, since it dropped back in November 2020. Met with widespread acclaim from critics and fans alike, the record produced four singles: Girls In The Hood, Don’t Stop featuring Young Thug, Body, and Cry Baby featuring DaBaby.

Good News debuted at No.2 on the Billboard 200 chart after moving 100,000 album-equivalent units in its first week.

It also No. 1 on the Top R&B/Hip-Hop Albums and Rap Albums charts, while peaking in the top 50 in a number of countries such as the United Kingdom, Australia, Canada, Ireland and New Zealand. 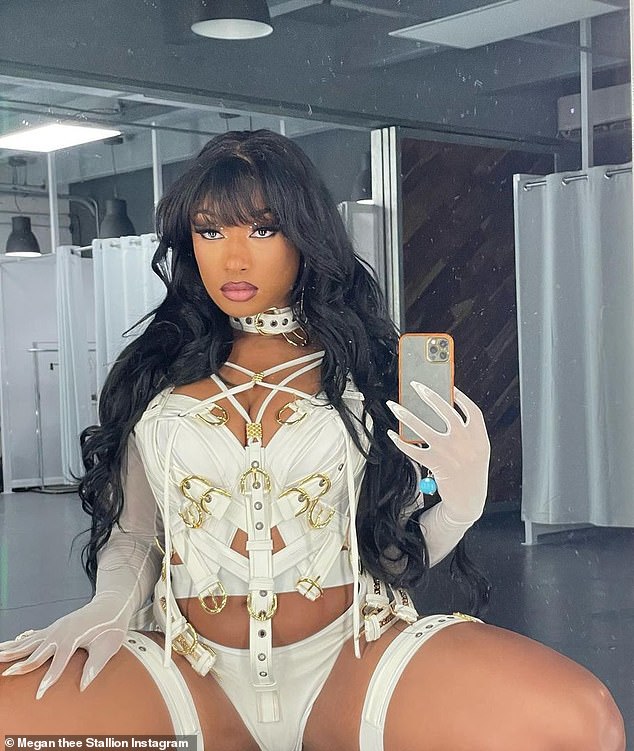 Stylin’: The outfit was rounded out with her long flowing tresses that fell well past her waist 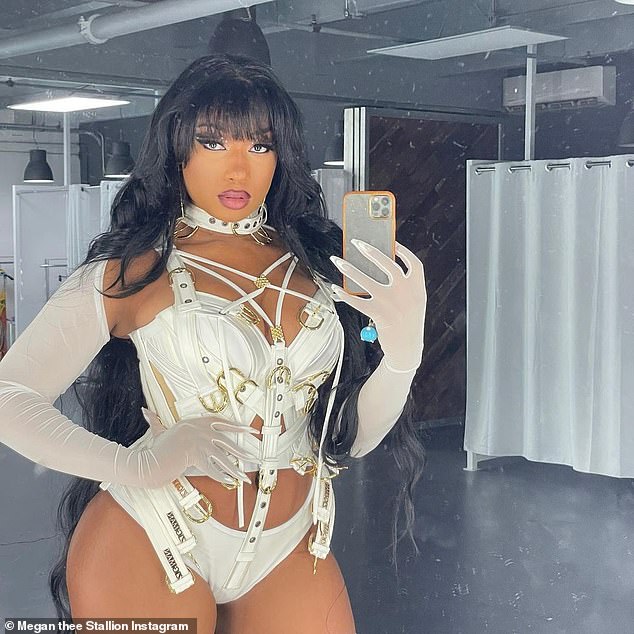 Promo mode: Megan has been out promoting her debut studio album, Good News, since it dropped back in November 2020