Prince Harry and Meghan Markle did not want to use the Earl of Dumbarton title for their son Archie because it contained the word ‘dumb’, it has been reported.

The Duke and Duchess of Sussex are said to have not been keen on the title because they feared the young royal might be mocked, the Telegraph reports.

Harry and Meghan were given the titles of Duke and Duchess of Sussex, Earl and Countess of Dumbarton and Baron and Baroness Kilkeel by the Queen on their wedding day.

However, they have rarely used the two other titles, with the couple instead going by the Duke and Duchess of Sussex.

Sources meanwhile have reportedly told the Telegraph that the couple were not keen on using the Earl of Dumbarton – a title of Scottish nobility – for Archie because it began with the word ‘dumb’ and they were ‘worried about how that might look’.

Another insider reportedly told the paper: ‘It wasn’t just Meghan who pointed out the potential pitfalls, it also bothered Harry.’

Prince Harry and Meghan Markle did not want to use the Earl of Dumbarton title for their son Archie because it contained the word ‘dumb’, it has been reported

The Duke and Duchess of Sussex are said to have not been keen on the title because they feared the young royal might be mocked, the Telegraph reports 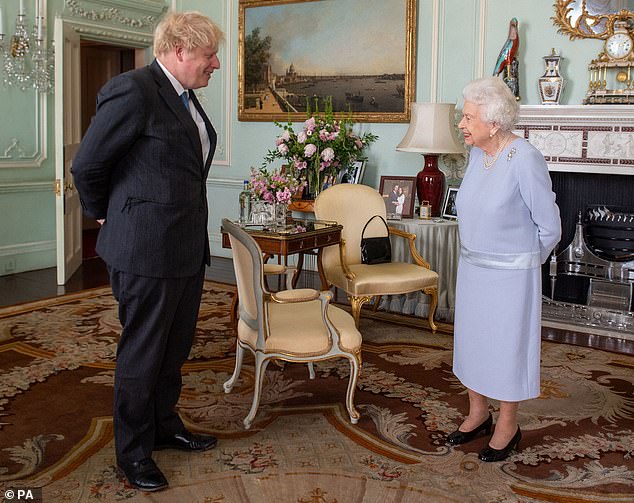 The Queen, who bestows titles, yesterday met with Prime Minister Boris Johnson face to face for the first time in more than 15 months

The history behind the title ‘The Earl of Dumbarton’

The Earl of Dumbarton is a historic Scottish title which has been extinct for more than 250 years.

It was first created in the reign of Charles II in the 1670s and given to professional soldier George Douglas, who was also made Lord of Ettrick at the same time.

Despite being born in Scotland, most likely in Douglas Castle, Lanarkshire, to the Marquess of Douglas, George, a catholic, spent much of his time in the service of French king Louis XIV.

When James II ascended to the English and Scottish throne he was a trusted servant – even following him to exile in France after the Glorious Revolution.

Following the death of their only son, the unmarried second Earl, both of Douglas’ titles became extinct in January 1749.

The second creation of the title was in 2018, when Prince Harry was made the Earl of Dumbarton and Baron Kilkeel on his wedding day to Meghan Markle.

The Scottish town of Dumbarton, from the Gaelic Dùn Breatann, is rooted in rich history that can be traced back to the Iron Age.

It was once the strategic stronghold of the Alclud Kingdom, making it the centre of British power in the north.

The town was later granted the status of Royal burgh by Scotland’s Alexander II in 1222.

Prince Harry, 36, is said to have not wanted to give his children titles anyway. Instead it is believed he wants to follow in the footsteps of his aunt, Princess Anne, who did not give titles to son Peter and daughter Zara.

Meanwhile, the Telegraph also reported how sources close to the Sussexes claim the couple ‘never raised an issue’ about Archie, two, not being made a prince.

It comes after reports in the Mail on Sunday suggested that Prince Charles had told Meghan and Harry that Archie would not be made a prince when he becomes king, as he plans to slim-down the number of ‘front-line’ royals.

The issue was raised during their jaw-dropping interview with Oprah Winfrey earlier this year, when Meghan claimed Archie had been blocked from a royal title – and could no longer get taxpayer funded security.

Meghan told the US chat show host: ‘They didn’t want him to be a prince or princess, not knowing what the gender would be, which would be different from protocol, and (said) that he wasn’t going to receive security.

She added: ‘In those months when I was pregnant we have in tandem the conversation of, you won’t be given security, not gonna be given a title and also concerns and conversations about how dark his skin might be when he’s born.’

However, the sources are said to have told the Telegraph that the couple had ‘never raised an issue’ about the titles, or lack off, until the interview.

It comes as the Mail on Sunday earlier this week claimed that Prince Charles had made it clear that Harry and Meghan’s son will have no place among frontline Royals as he plans a slimmed-down Monarchy after he becomes King.

The Prince of Wales is said to have initially intended to include Harry and Meghan in his slimmed-down Monarchy, but the plan is said to have changed when the pair moved to America.

A grandchild of the sovereign has long had the right to be a Prince, but Charles is determined to limit the number of key Royals, believing the public does not wish to pay for an ever-expanding Monarchy.

According to the Mail on Sunday, Charles told the Sussexes that he will change key legal documents to ensure that Archie cannot get the title he would once have inherited by right, according to a source close to the couple. 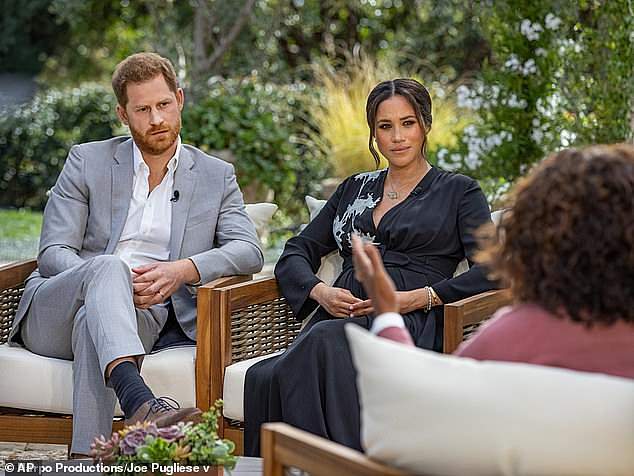 The issue of titles was raised during their jaw-dropping interview with Oprah Winfrey earlier this year, when Meghan claimed Archie had been blocked from a royal title – and could no longer get taxpayer funded security

The move is said to have incensed the Sussexes and is thought to have prompted the series of bitter accusations the couple have levelled at Charles and the Royal Family from across the Atlantic.

However, it was later reported by the Sun that the decision for the couple to do their interview with Oprah came within 24 hours of Harry’s military titles being removed in February’s final Megxit deal.

It comes as a royal expert today claimed that Meghan and Harry’s decision to buy a ‘Lili Diana’ website almost a week before their daughter’s birth and ‘Lilibet Diana’ on the day she arrived indicates they had ‘already made up their minds’ on the name before speaking to the Queen.

Four days before Lili was born in California the domain LiliDiana.com was registered on May 31 followed by LilibetDiana.com on June 4 – the day Archie’s younger sister entered the world.

‘Lilibet’ was first used by the then Princess Elizabeth when she was unable to pronounce her own name and was used affectionately by her grandfather George V and later her husband Philip until he died in April.

Following claims by the BBC that the Queen had not been consulted, Harry and Meghan’s lawyers said it was ‘false and defamatory’ to suggest they did not discuss using the name with Her Majesty.

Royal author Phil Dampier told MailOnline: ‘The fact they registered it before the name was announced tends to indicate that they had made up their minds and probably only told the Queen once they’d decided on it.

‘When they issued a statement it said Harry had rung the Queen before anyone else and discussed the name with her. That may well be right but that’s not the same as asking permission days or even weeks beforehand. I think the Queen might have been caught off guard and probably didn’t object to it because she doesn’t want to upset Harry any further’.

He added: ‘But from what I hear the Palace has not denied the BBC story which claimed Harry didn’t ask permission before announcing the name.’

Evening Standard Royal Editor Robert Jobson suggested that the couple may have undermined their legal threat against the BBC, tweeting today that their lawyers could now be ‘without a paddle’.

The public announcement of Lilibet Diana’s arrival came two days later. Harry insists he spoke to his grandmother about the name ‘in advance of the announcement’ but has not been specific on when that exactly was only to say: ‘His grandmother was the first family member he called’.

A spokesman for the couple told The Telegraph: ‘As is often customary with public figures, a significant number of domains of any potential names that were considered were purchased… to protect against the exploitation of the name once it was later chosen and shared.’

The statement suggests that had Her Majesty refused to allow them to use Lilibet they would have gone for another name amongst the ‘significant’ number of domains they bought before the birth.

MailOnline had contacted representatives of the Sussexes for comment.