The Duke and Duchess of Sussex ‘know their royal tour of Africa has to be a success’ to turn the tide of bad publicity, a royal expert has claimed, suggesting that baby Archie will play a starring role.

Meghan Markle, 38, and Prince Harry, 35, have faced heavy criticism this summer, from their privacy demands over Archie’s christening and Meghan’s controversial Wimbledon appearance, to their recent private jet controversy.

The couple will top off their summer with their first royal tour as a family, travelling to Africa on Monday for 10 days packed full of engagements.

And now a royal source told Vanity Fair that Meghan and Harry feel the tour is a  chance to redeem themselves, saying: ‘They and their aides know this tour has to be a success, and everything has been planned meticulously so there is no margin for error.’

Meghan Markle, 38, and Prince Harry, 38, ‘know their royal tour of Africa has to be a success’ in order to turn the tide on their controversial summer, according to a royal source 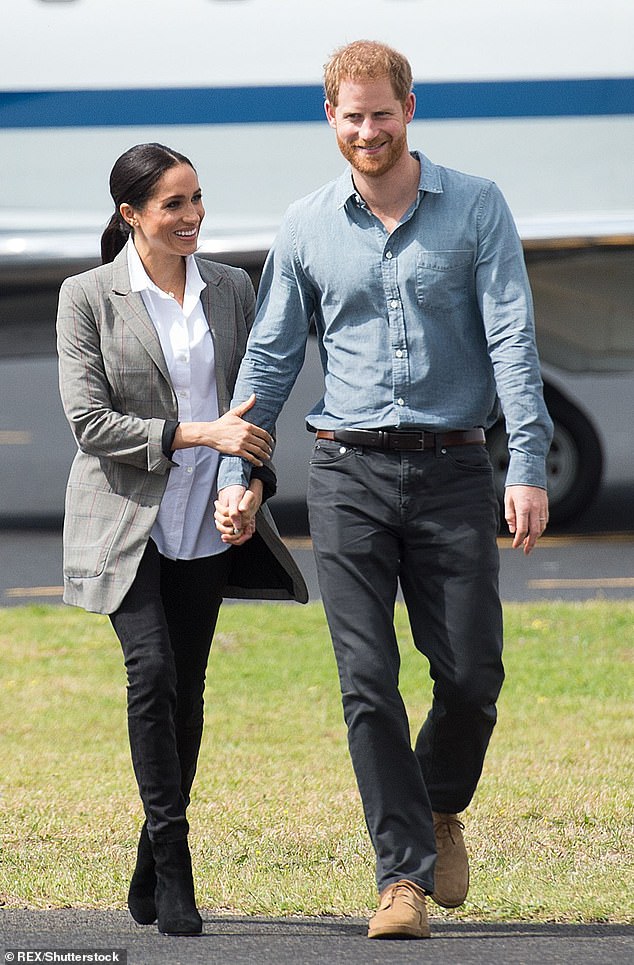 The couple jet off on the first royal tour as a family on Monday, and will travel through Southern Africa for 10 days (pictured, during their first tour together in Australia in October)

Acknowledging that the couple were keen to ‘turn the tide’ on their controversial summer, royal author Ingrid Seward suggested that baby Archie’s appearance on the tour could play a starring role to help change public perception.

She said: ‘People will want to see baby Archie who could be the key player in this. I think if they show as a glimpse of Archie it could turn things around for the Sussexes.’

She added: ‘It’s a small thing but it could end up being a very big thing in terms of better press coverage. They’ve had a tough run, this is a chance to make it better.’

Ingrid revealed that the couple were well-aware that there was a lot riding on the tour, having had a summer rife with controversy. 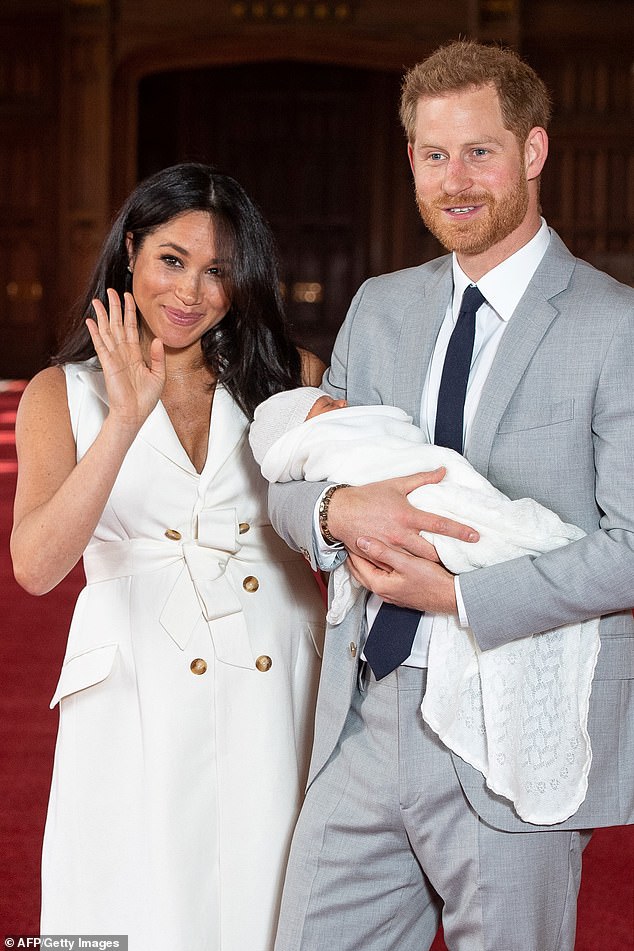 Royal author Ingrid Seward suggested that Archie could play a starring role in making the tour a success for the couple, saying: ‘People will want to see baby Archie who could be the key player in this.’ 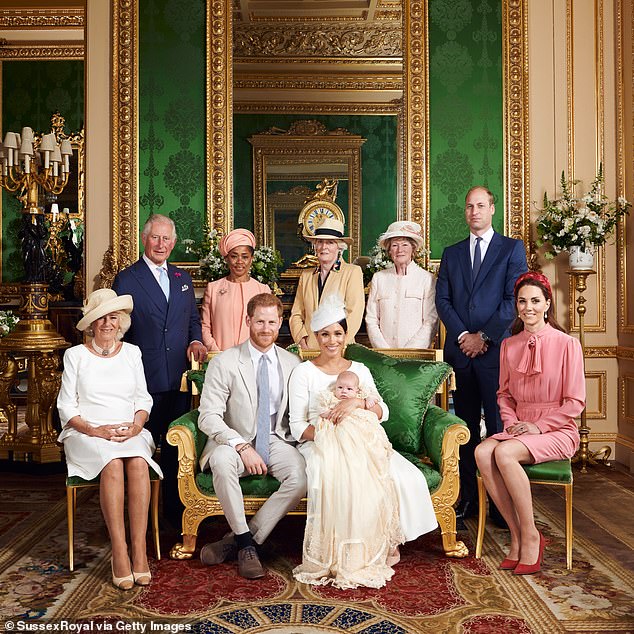 The couple have faced a controversial summer, and faced backlash for their top secret christening for baby Archie, when they refused to reveal the names of his godparents (pictured, one of three official photographs released of the day)

The couple have faced backlash over their use of private jets over the summer, flying to Italy on what is their ninth plane journey in just over six weeks.

There are about 20 commercial flights daily from London Gatwick, Heathrow, Luton, Southend, City and Stansted to Rome’s two airports, Fiumicino and Ciampino.

They came under fire for taking private flights after previously claiming they will have a maximum of two children to avoid damaging the environment. 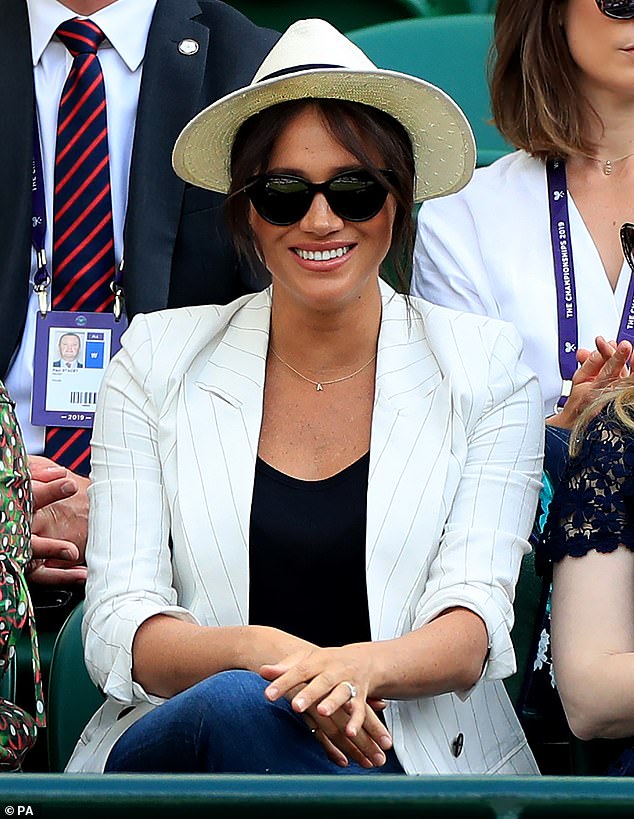 Meghan has made several controversial appearances this summer, including attending Wimbledon where security banned fans from taking photographs of her 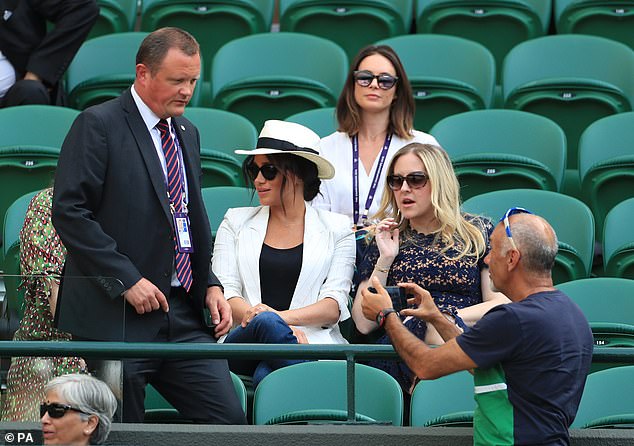 One fan was assured away by Meghan’s security, although it was later revealed he was taking a selfie with the court in the background

And earlier this summer, they faced questions over their privacy demands, including holding a top secret christening for son Archie and refusing to tell the public who his godparents are.

Meanwhile Meghan has made several controversial appearances, including attending Wimbledon where her security banned fans from taking photographs.

Critics have hit out at Meghan recently for ‘considering herself more of an A-lister than a member of the royal family’, after she selected a handful of celebrity friends for the cover of Vogue.

Earlier this September the couple enlisted Hollywood heavyweights Sunshine Sachs amid concerns the public has turned on her in recent months. 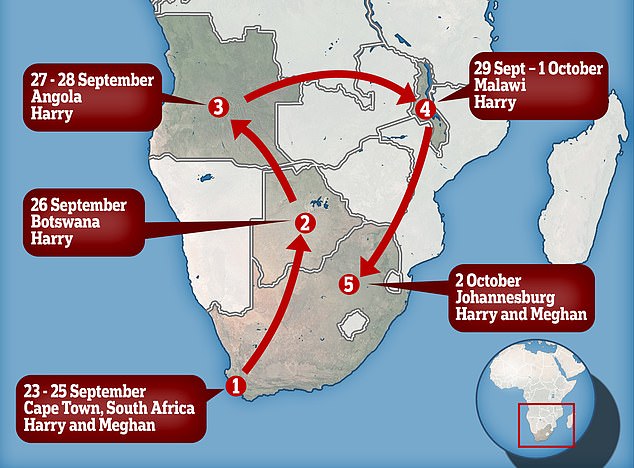 Prince Harry and Meghan embark on their royal tour of southern Africa on Monday, and which will take place from 23 September-October 2

In order to ensure the royal tour of Africa runs smoothly, the couple will be travelling with their all-female team of staff.

They are said to have paid private for their new private secretary Fiona Mcilwham so she can learn the ins and outs from the departing Samantha Cohen, who is set to leave the household after 15 years of working for the royal family.

Seward suggested it was important the couple ‘clawed back some goodwill’ on the tour.

The couple have said they want as little fuss and formality as possible on the jam-pakced tour, which will see them travel across will go to Angola and Malawi and make a short working visit to Botswana within the 10 day trip.