The Duchess of Sussex joined Prince Harry and members of the Royal Family for a traditional shooting lunch yesterday, despite claims that she opposes bloodsports.

Meghan, 37, who is expecting her first child in June, arrived for the ‘cold cuts’ Boxing Day feast after her husband, Prince Harry, had spent the morning bagging pheasants with his father, Prince Charles, and brother, Prince William.

She was accompanied by the Duchess of Cambridge in another sign of solidarity between the two women after weeks reports about their undoubtably awkward relationship.

Meghan, 37, who is expecting her first child in June, attends Christmas Day Church service at Church of St Mary Magdalene in Sandringham

The merry party took place at Wood Farm, the five-bedroom farmhouse where Prince Philip spends much of his retirement.

A Sandringham insider said : ‘The men went out as usual for the shoot after a hearty breakfast.

‘A buffet is laid out of kedgeree, bacon and eggs, cereals and toast to set them up for the day.

‘It’s cold trudging across the muddy fields so you need plenty of sustenance.’ In years gone by the Queen and the royal wives would often be seen following along, picking up pheasants, partridges and the occasional duck.

Her Majesty was often photographed wringing the neck of injured birds, much to the annoyance of animal welfare groups, but at 92, those days have long gone.

Pregnant Meghan stayed inside in the cold during the morning session, while Kate remained at Anmer Hall, her ten-bedroom house on the estate, looking after her three children, George, Charlotte and Louis.

But at lunchtime the Merry Wives of Windsor were all driven to Wood Farm to be reunited Meghan travelled in a Range Rover with the Queen and Prince Philip, 97, who missed church on Christmas Day.

Britain’s Kate, Duchess of Cambridge and Meghan, Duchess of Sussex arrive at St Mary Magdalene’s church in a show of solidarity 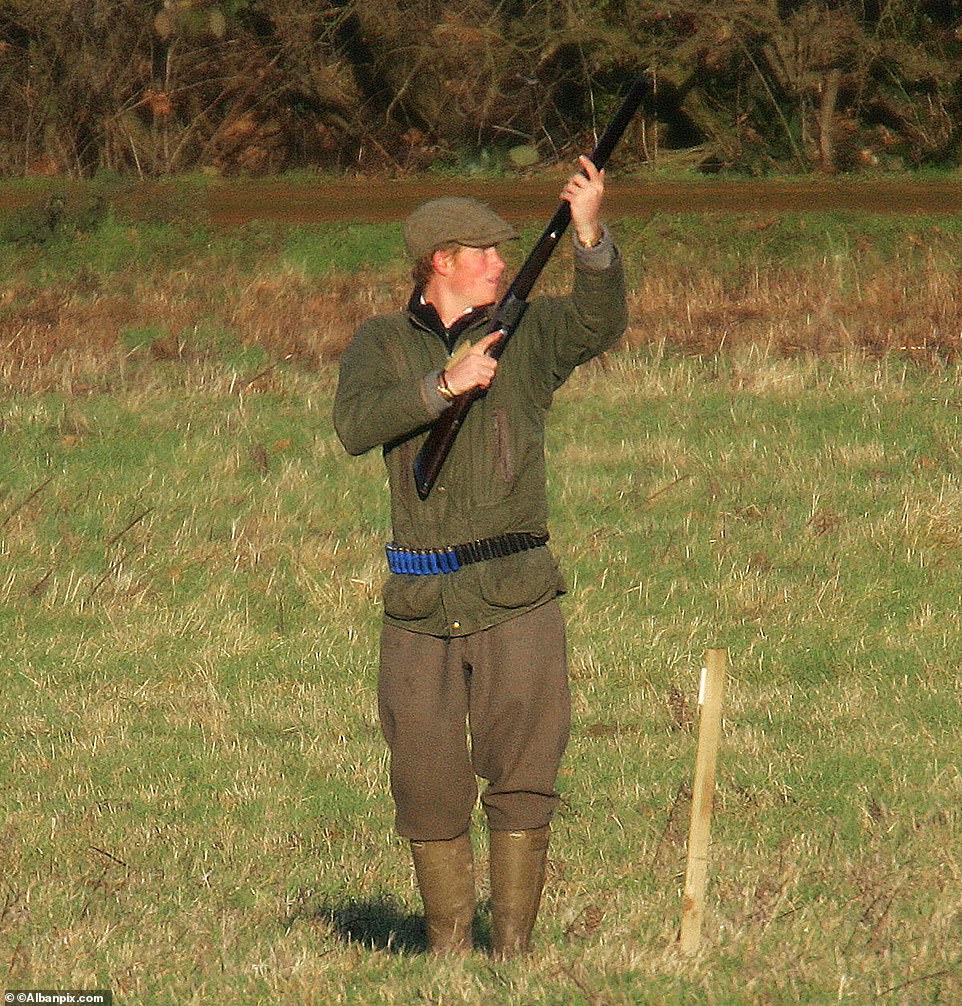 There were rumours that Prince Harry had been banned from the shoot by Meghan. Pictured: Prince Harry on a shoot in 2009

A buffet was laid out at Wood Farm of cold meats, hot sausages, soup and salads, with spirits and tea to warm up the shooters, which this year also included Prince Andrew and, for the first time, his son-in-law Jack Brooksbank.

Princess Eugenie joined her new husband and the others for lunch.

The insider said : ‘There is a special de-robing room on the side of the house and they all go in there and take off their muddy clothes and boots.

‘Then they go into a side room which is specially designed for shooting parties where they toddle around in their socks helping themselves to lunch.

‘The whole thing is incredibly relaxed and everyone is normally in a great mood.

‘Although he can’t shoot anymore Prince Philip loves being there and so does the Queen.

‘She will be delighted that Kate and Meghan have sorted out their problems and that the year has ended on a high with the whole family in harmony.’ After lunch the men continued shooting while Meghan and Kate returned to Sandringham for tea with the Queen and Prince Philip.

It’s believed Harry and Meghan departed from Norfolk last night, presumably to spend time with her mother, Doria Ragland, as did William and Kate, who are expected to spend some time with Kate’s family in Berkshire.

Earlier this month it was wrongly claimed that the animal-loving American had ‘banned’ her new husband from taking part in bloodsports, which she has always opposed.

But as the Mail revealed yesterday, Harry had every intention of taking part.

Harry has been shooting at Sandringham since he was 12 having been taught by Prince Charles as a young child and has become a crack shot, killing deer, wild boar and even a water buffalo, as well as pheasant and grouse.

The idea that Meghan had banned him from taking part stemmed from the fact that the former actress, who once designed a pair of ‘vegan leather’ trousers as part of a clothing range, has previously described herself as a ‘principled animal lover’ who refuses to promote fur and once described herself in an interview as being a vegan during the week.

But sources close to the couple have said this couldn’t be further from the truth, and pointed out that even if the duchess, who adopted two dogs from a welfare shelter in Canada, did advocate wearing ethically-made clothes, for example, she has always openly eaten meat.

Her former lifestyle blog, the Tig, was full of recipes for her favourite meat-based meals, including boar ragu, and Harry proposed as they cooked a roast chicken dinner.

‘Meghan has never had an issue with Harry shooting, as it is something he has done for many years,’ the source said.

‘It is completely untrue to say she has banned him from anything, particularly this. Harry couldn’t attend last year’s shoot as he had to drive to London for work.’ A second source said that Harry had always maintained shooting is a sustainable field sport and his stance hasn’t changed – he has even acquired a black Labrador puppy to train as a gun dog.

Former royal chef Darren McGrady recently revealed that Harry’s mother, Princess Diana, was against bloodsports but allowed her sons to take part in family traditions and dubbed her son ‘The Killer Wales’.

He tweeted: ‘Princess Diana WAS against bloodsports. She killed the stag [a reference to how she once went deer stalking at Balmoral] because ‘they wanted me to’. ‘What is it with this family that they love killing things? (as the boys were hunting rabbits at Windsor),’ I remember her saying in the kitchen at Kensington Palace.’ In 2004 Harry was photographed smiling triumphantly as he crouched over a fallen water buffalo, rifle in hand.

He killed the one-ton water beast on a hunting trip in Argentina during a gap year trip to South America. 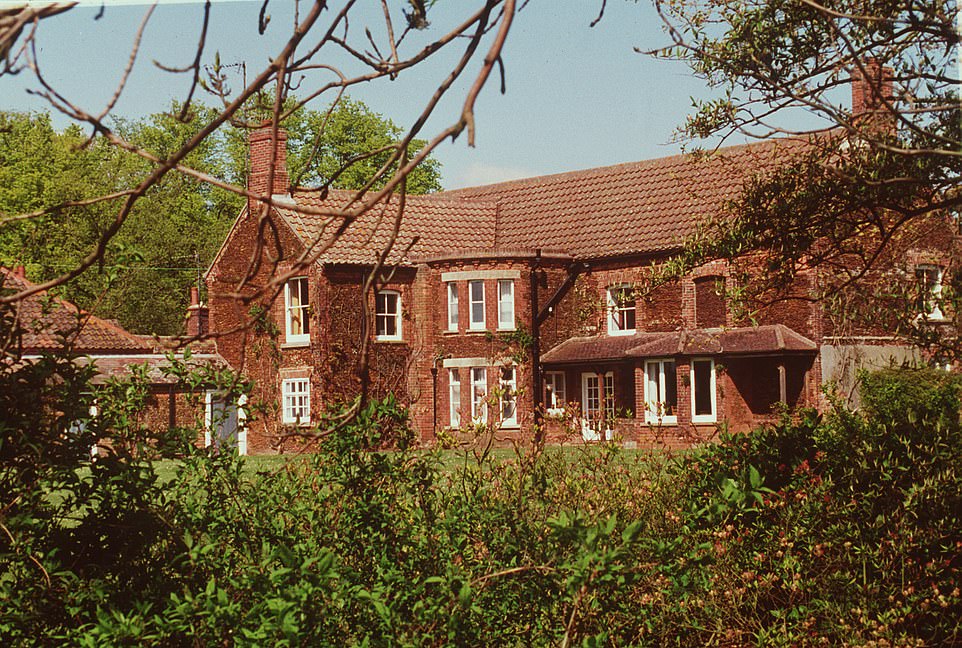 By Unity Blott for MailOnline

The single mother who took the now-famous photo of the ‘fab four’ on Christmas Day at Sandringham has done it again.

Karen Anvil, 40, from Norfolk, shot to fame after capturing William, Kate, Harry and Meghan walking to church last year and claims to have raked in £40,000 from the snap.

And she was back to her old tricks again this week, snapping the royal family walking to St Mary Magdalene Church – and even having a chin wag with the pregnant Duchess of Sussex, who hinted that she is ‘nearly there’.

In one frame Meghan, who is expecting her first child with Prince Harry next spring, can be seen smiling broadly as she chats to the waiting crowds.

Meghan can be seen holding her baby bump as she speaks to well-wishers in Sandringham. She was accompanied by the Duchess of Cambridge in another sign of solidarity between the two women 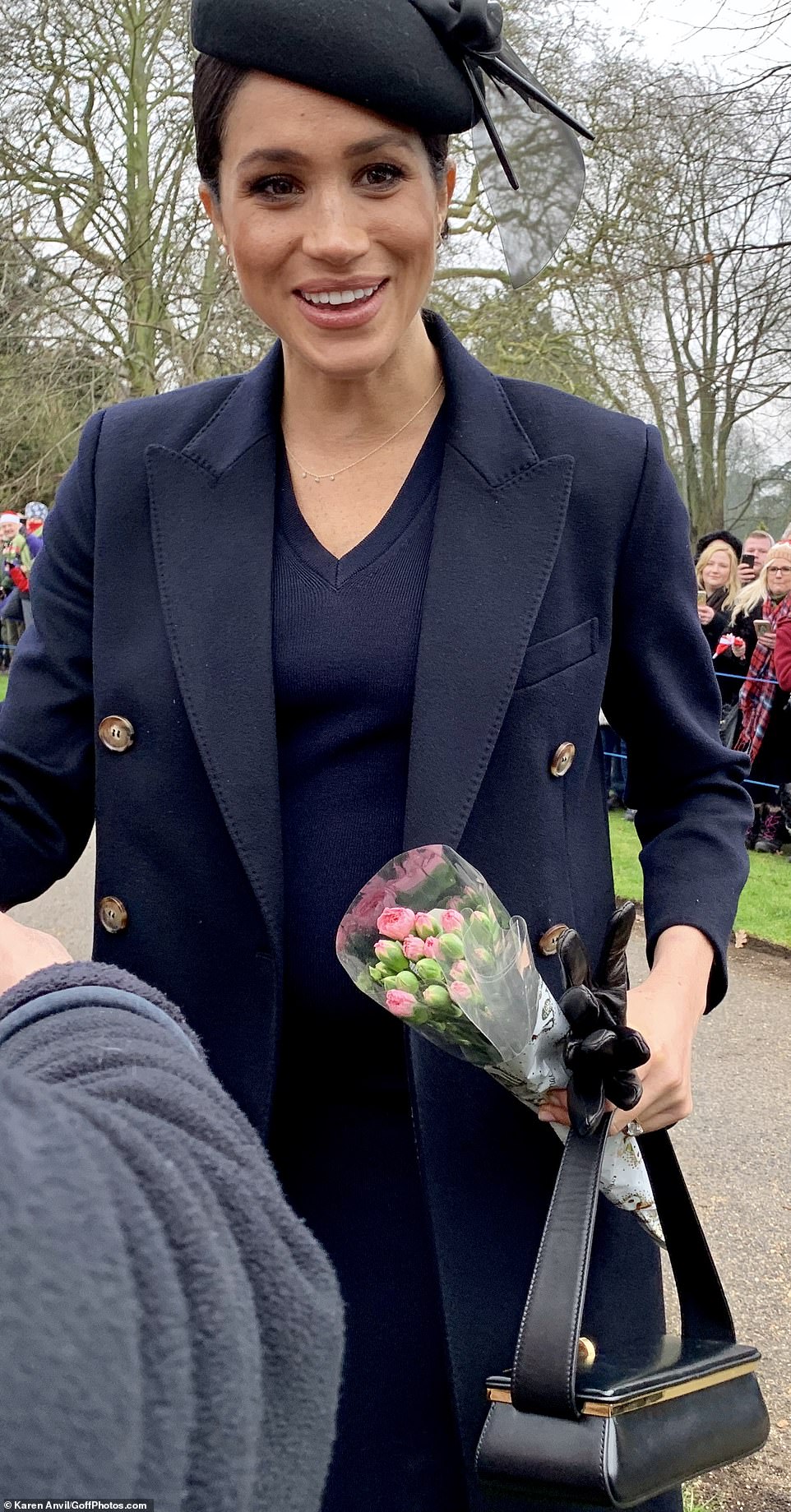 Not long now! Amateur photographer Karen Anvil enjoys a chin wag with the pregnant Duchess of Sussex, who hinted that she is ‘nearly there’, at St Mary Magdalene Church, Sandringham, on Christmas Day 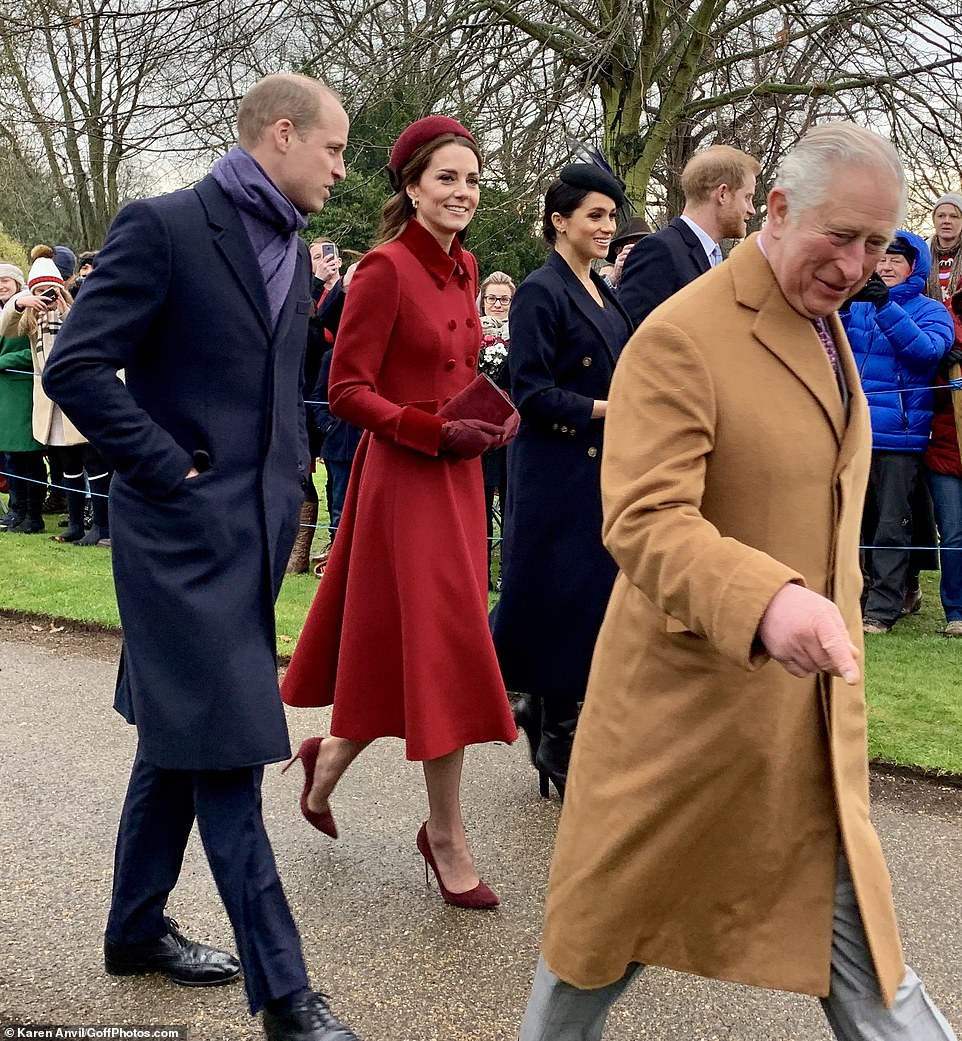 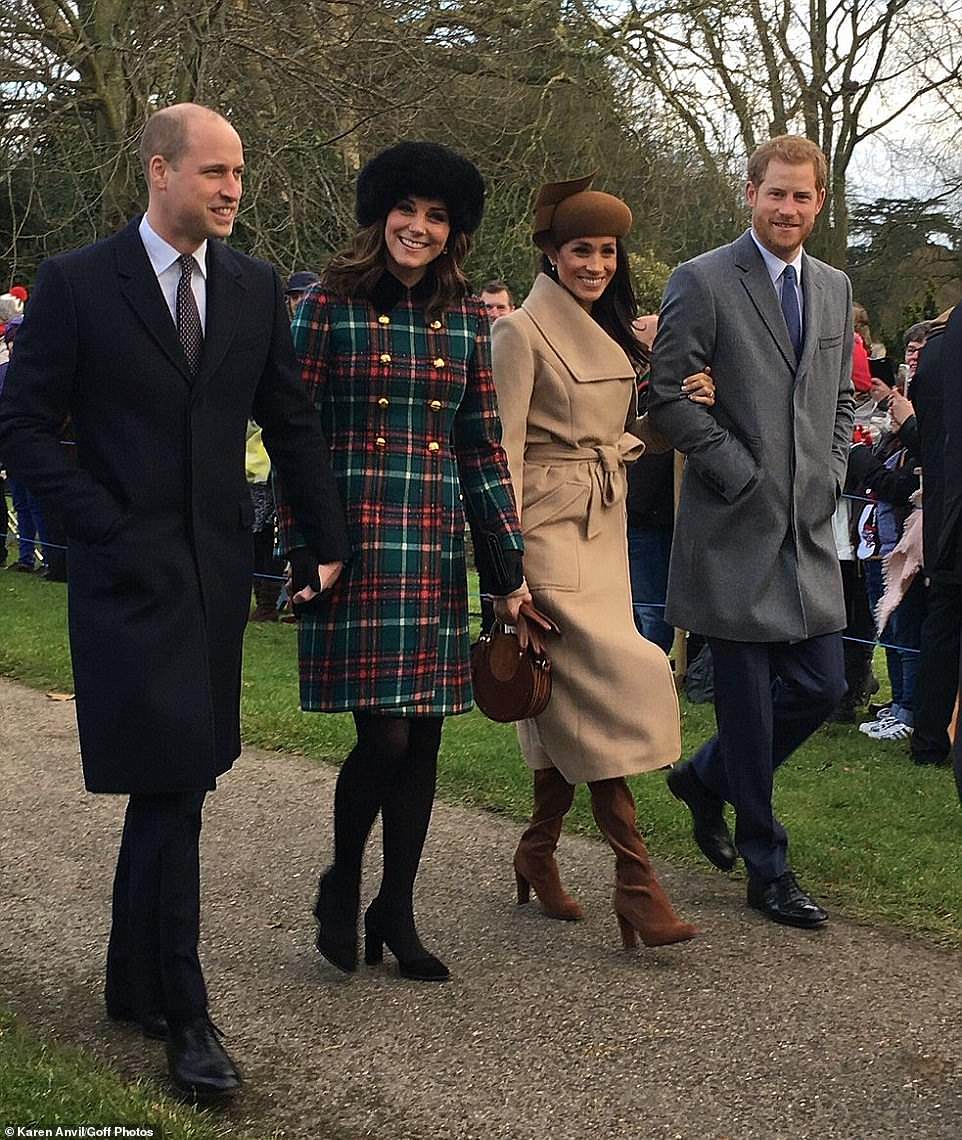 Money maker! The single mother who took this world-famous photo of William, Kate, Harry and Meghan at Sandringham last year revealed she has made £40,000 from the snap

Recalling her brief conversation with the former actress this week, Karen said: ‘I said congratulations on your baby and she said, ‘Thank you.”

‘I then asked her if she was excited and she said ‘Yes we are, we’re nearly there’ as she cradled her bump.

‘I told her to enjoy every moment as being a mother is the best feeling. She smiled said thank you, and moved on.’

She even managed to recreate last year’s ‘fab four’ photo – albeit with an oblivious Prince of Wales obscuring Harry and Meghan from view. 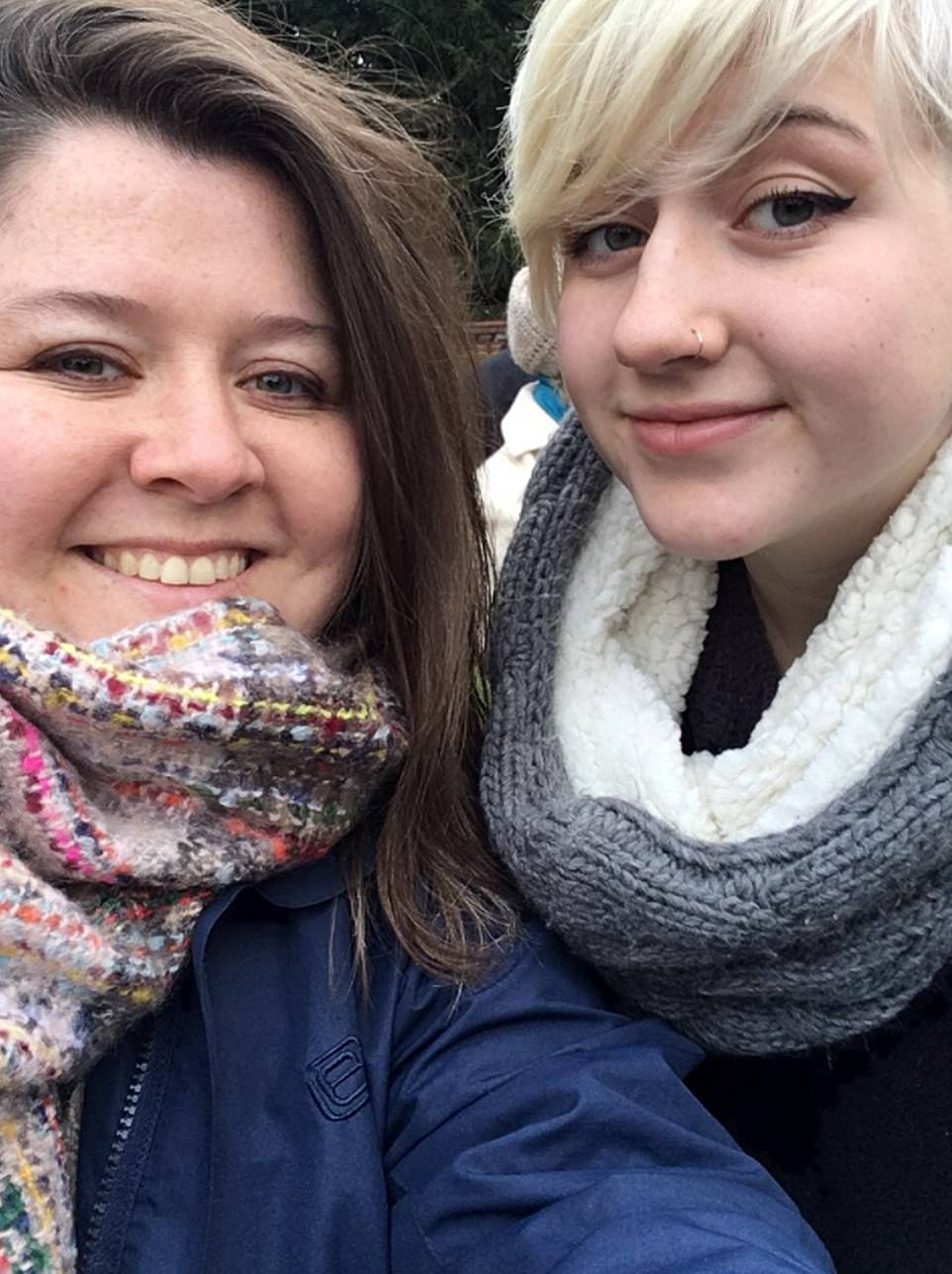 Royal fan: Karen Anvil, left, had been waiting in the crowd with daughter Rachel, right, in the hope of catching a glimpse of the royals on their way into church on Christmas morning

Ms Anvil also snapped images of newlyweds Princess Eugenie and Jack Brooksbank, left, and the Duke and Duchess of Cambridge, right, at Sandringham on Christmas Day

Ms Anvil was one of hundreds who braved the cold to get a glimpse of the royal family as they walked to church on the Sandringham estate in Norfolk on 25 December last year.

After screaming to attract attention, Ms Anvil, who had two jobs at the time, snapped a candid picture of the ‘fab four’ that was quickly distributed to publications around the world – and has subsequently helped her rake in £40,000.

Over the last year, royalties have brought Ms Anvil a regular monthly income of between £600 and £6,000 – and she said she’s earned enough money to clear her debts, take a year off work and ‘do up’ her council house.

Describing the experience as ‘like a lottery win’, Ms Anvil, of Norfolk, told the BBC: ‘The biggest change for me was that it was so nice to go shopping at Tesco and not be worried about whether I’ve got the cash in the bank.’

Karen chatted to Meghan outside the church, pictured. Recalling her brief conversation with the former actress this week, Karen said: ‘ I said congratulations on your baby and she said, ‘Thank you” 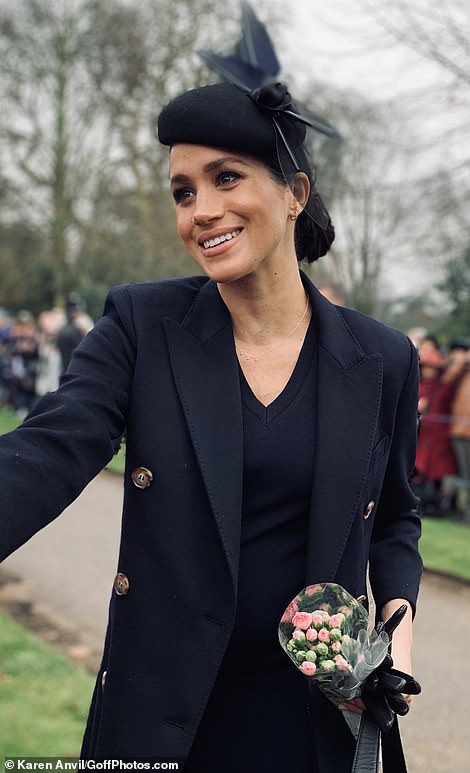 Recalling her conversation with Meghan yesterday, Ms Anvil ‘said: ‘I asked her if she was excited and she said ‘Yes we are, we’re nearly there’ as she cradled her bump’

One of the first purchases she made was a bed, having slept on a mattress on the floor for 18 months.

Ms Anvil had been waiting outside the church with daughter Rachel in the hope of catching a glimpse of the royals on their way in.

Photographers from around the world jostled for position to capture a photo of the Duke and Duchess of Cambridge with the then newly engaged Harry and Meghan – but it was Ms Anvil who trumped them all.

By ‘screaming like a fan girl’, Ms Anvil was able to draw looks from both Kate, 36, and Harry, 34, who are both smiling staring straight at her lens in the shot.

Meanwhile William, 36, and Meghan, 37, are striding ahead with broad smiles on their faces. 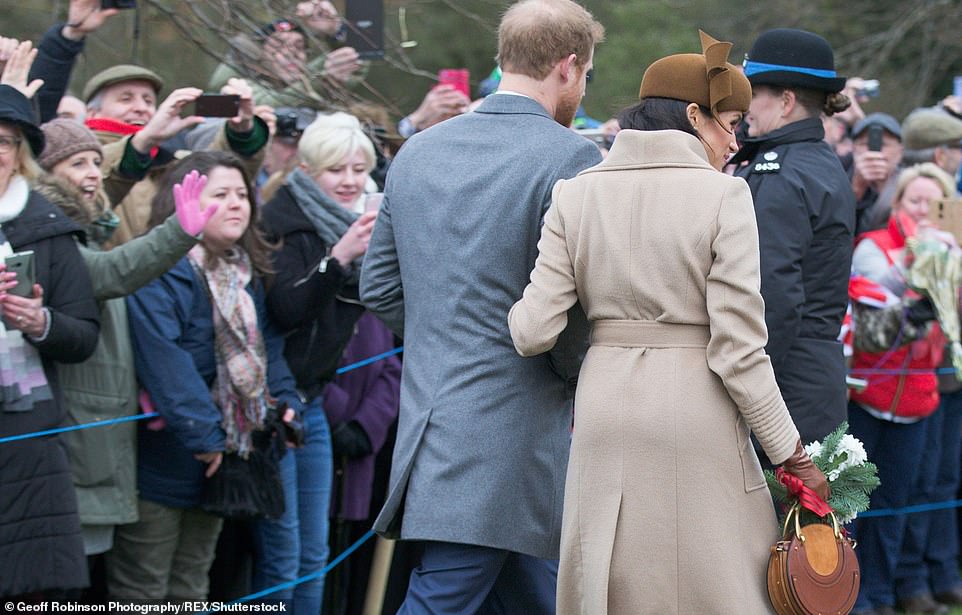 Prime position: Ms Anvil, pictured third from left in a blue coat, waited with daughter Rachel, seen on her left, in the hope of seeing the royals. She snapped a photo as they walked past

She uploaded the photo and by 5pm that day it had gone viral. It has since been sold to publications in countries around the world, with requests from Japan, the US, Canada, Spain and Italy all coming through.

In a tweet earlier this year, Ms Anvil told how she had spoken to Prince Harry about the photo when she met the royal during a walkabout in Birmingham.

She wrote: ‘Got to speak to Meghan today! Also shook Prince Harry’s hand and asked him if he liked the Xmas photo! He said he hoped I made lots of money from it! I’m absolutely buzzing!’

The proud mother previously said some of the money will go towards her daughter’s education.