It was a solemn occasion, but the Duchess of Sussex looked like she was ready for a turn on the red carpet as she joined the Royal Family for the Armistice Day service at the Cenotaph yesterday.

Former actress Meghan, 37, returned to her showbiz roots with a Hollywood-inspired palette as she observed the moving centenary service from a balcony overlooking the war memorial in London.

The mother-to-be, who is expecting her first child with Prince Harry, 34, next spring, opted for a fresh shades of lilac and brown – and added highlighter on her cheekbones to ensure she looked great from ‘every camera angle’, according to a professional make-up artist.

It stood in contrast to her sister-in-law the Duchess of Cambridge, 36, who opted for a more ‘classic’ and ‘grown-up’ look for the appearance.

Glamorous: The Duchess of Sussex, 37, returned to her showbiz roots with a Hollywood-inspired palette as she observed the Armistice Day service at the Cenotaph yesterday 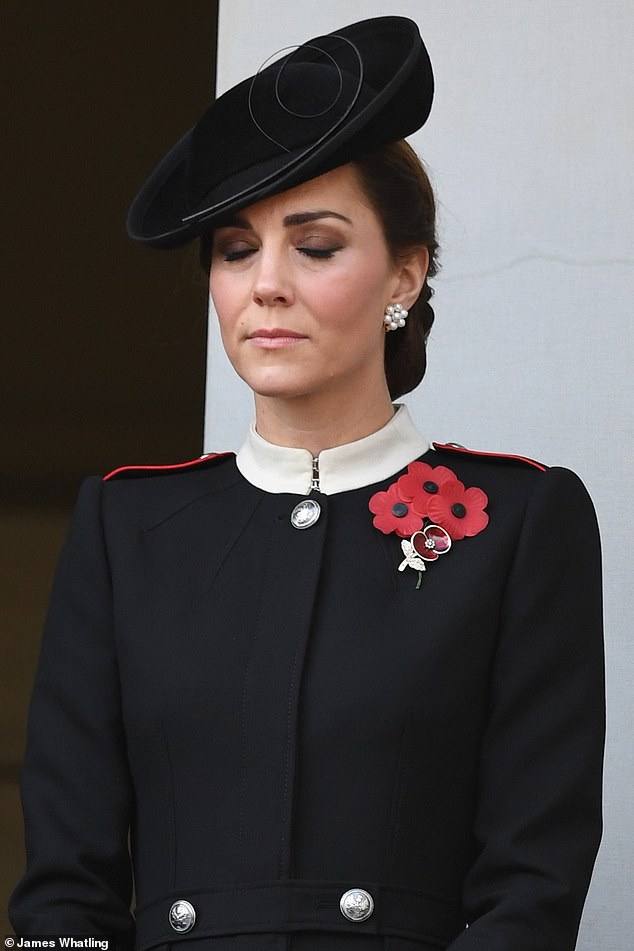 Grown-up: It stood in stark contrast to her sister-in-law the Duchess of Cambridge, 36, who opted for a more ‘classic’ and ‘grown-up’ look for the appearance, pictured

Speaking to FEMAIL, Laura Kay, Professional Makeup Artist of Laura Kay London, explained Kate had opted for a ‘serious’ look while Meghan’s was ‘youthful and fresh’.

‘The Duchess of Cambridge tends to play it safer and her look here is very elegant and classic,’ London-based Laura said. ‘Perhaps Meghan is more used to her Hollywood style and prefers her makeup look to reflect that.’

‘The main difference between to two looks in my opinion are the finish on the skin as Kate has opted for a more matte look and Meghan’s looks more dewy and fresh,’ she said. 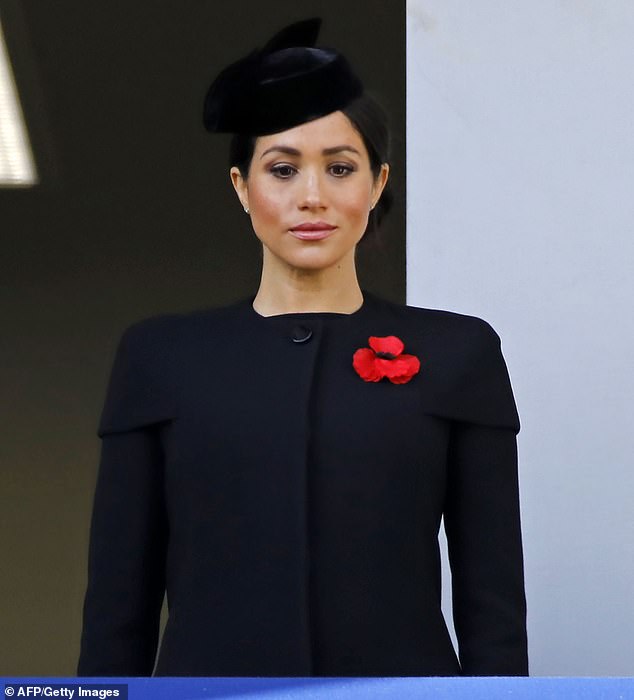 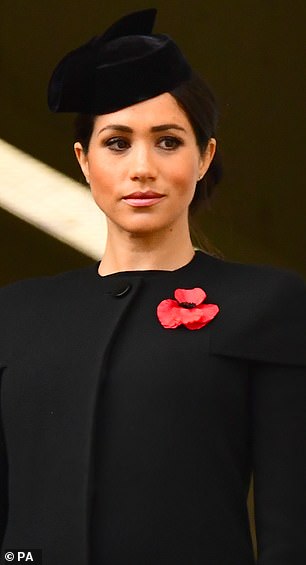 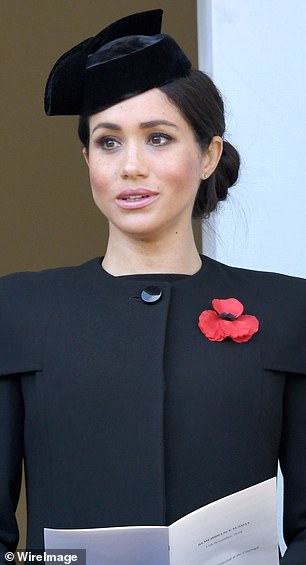 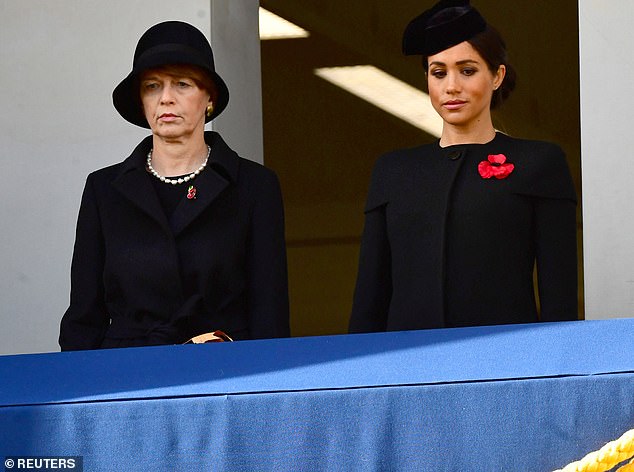 Debut appearance: Meghan joined the German president’s wife Elke Büdenbender as the pair watched the German leader lay a wreath to remember the lives lost in the First World War

Both have quite bold and defined brows but Kate’s eye makeup looks more precise and Meghan’s is slightly more smoky and sultry.’

Despite the differences, both royals opted for looks that were ‘appropriate’ for the occasion, she noted.

Meanwhile Jade Elliott, founder of make-up brand ICONIC London, added Kate opted for something ‘understated’ and ‘traditional’, while Meghan was ‘luminous’ and ‘pretty’.

Delving into the details of Kate’s make-up, Laura said: ‘ Her strong brow was probably defined with a dark brown brow powder. Natural looking false lashes were used to open up the eyes and were lined with black eyeliner with a small cat-eye flick. 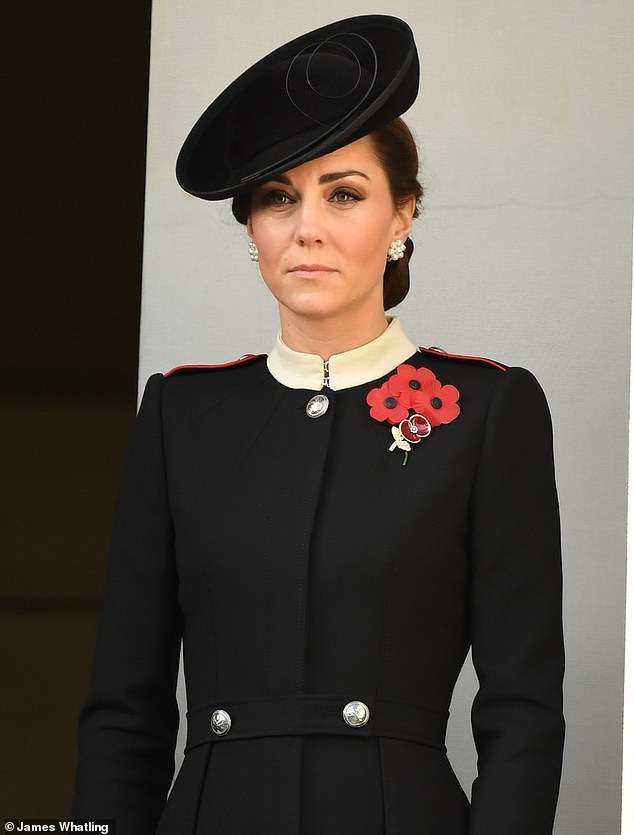 Experienced: Kate’s make-up look was described as a ‘prototype’ for such royal appearances 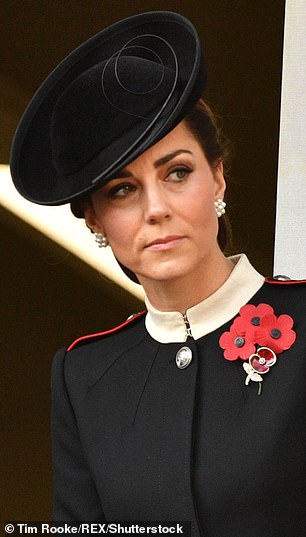 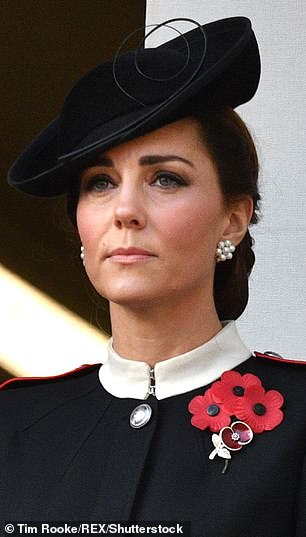 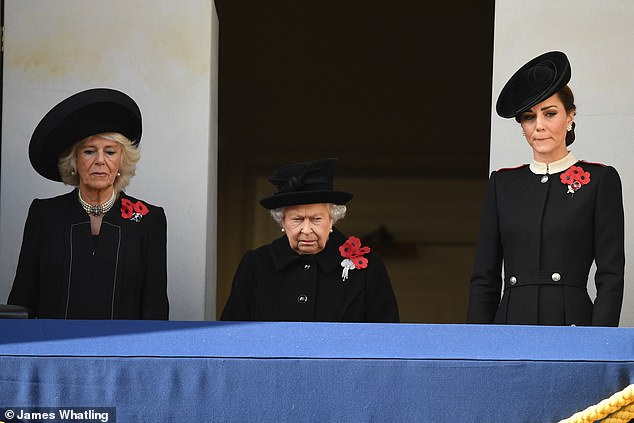 Sombre: The Duchess of Cambridge joined the Duchess of Cornwall, left, and the Queen on the balcony of the Foreign Office to observe the moving centenary service from above

‘The sockets of the eyes are dabbed with earthy browns and rusts to add warmth and to not let her strong eye look become too severe.

‘There’s a hint of pink blush strobbed across her cheekbones with a barely there nude lipstick or gloss.’

Laura added that Kate might benefit from being more ‘experimental’ with her make-up on occasion.

Turning to Meghan, who is expecting her first child with Prince Harry, 34, next spring, Laura reasoned: ‘Meghan’s makeup was also subtle but was fresh. Instead of using heavy tones like Catherine did, Meghan used soft browns and lilacs inside the sockets of the eyes with a hint of highlighter on the brow bone.

‘A creamy dusty pink blusher is blended into the apples of her cheeks and there appears to be highlighter swept down the bridge of her nose and across her cheekbones to define the contours of her face – and to look great in every camera angle.’