The Duke and Duchess of Sussex have been pictured leaving the South of France over the weekend in a fourth trip by private jet in just 11 days.

Prince Harry and Meghan, who have been outspoken on environmental issues in recent months, generated an estimated seven times the emissions per person compared to a commercial flight when flying home from Nice.

Photographs of the royal couple and three-month-old Archie showed the family stepping on board the private jet on Saturday at about 3pm local time, having arrived in France three days earlier.

The couple are believed to have visited the £15million palatial home of Castel Mont-Alban owned by Sir Elton John and his husband David Furnish during their holiday to the French Riviera.

The trip to Nice came shortly after Harry and Meghan, who married in May last year, had returned by private jet to the UK from Ibiza after a six-night break on the Spanish island to mark the Duchess’s 38th birthday. 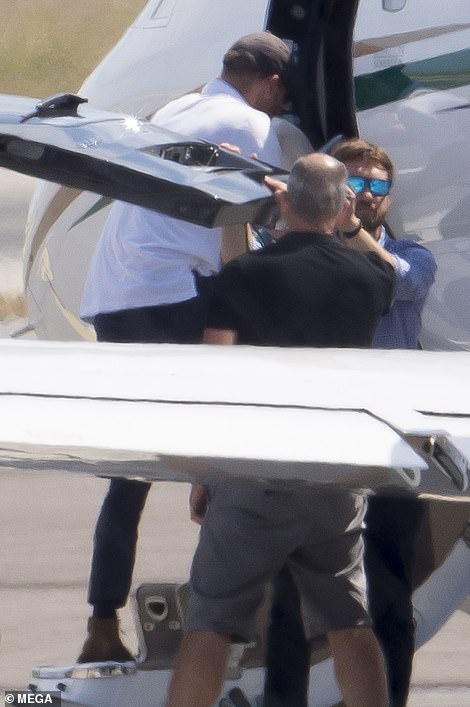 Prince Harry and Meghan are pictured stepping on board a private jet on Saturday, having arrived in France three days earlier 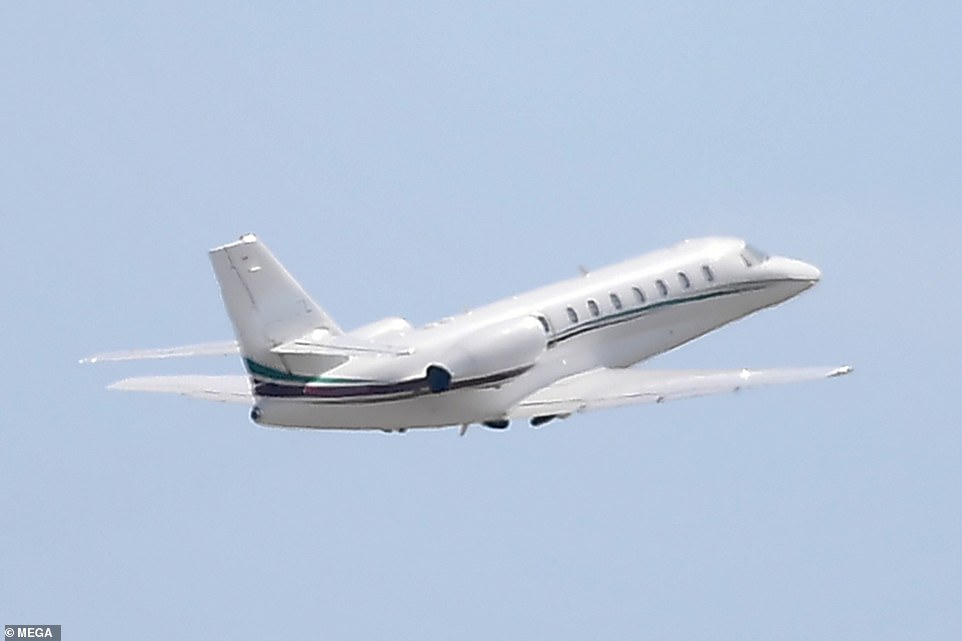 Last Wednesday, Harry and Meghan had arrived in France on a 12-seater Cessna aircraft, despite there being more than 20 scheduled commercial flights from London to Nice each Wednesday costing as little as £100 each.

The visit to France came after their first Mediterranean holiday of the summer – a trip to Ibiza which saw them fly out on August 6 before returning last Monday. Both journeys were again made by private jet.

Speaking about their travels by private jet, Labour MP Teresa Pearce said: ‘Given the position they have taken publicly about being responsible on climate change, this does seem an anomaly which they should look at.

‘I find this quite surprising because it doesn’t fit with their public image and the way they’re so concerned about the planet and the environment.’

Ken Wharfe, an ex-royal protection officer who guarded Princess Diana, said: ‘Frankly it’s hypocritical. Harry can’t be preaching about the catastrophic effects of climate change while jetting around the world on a private plane.’ 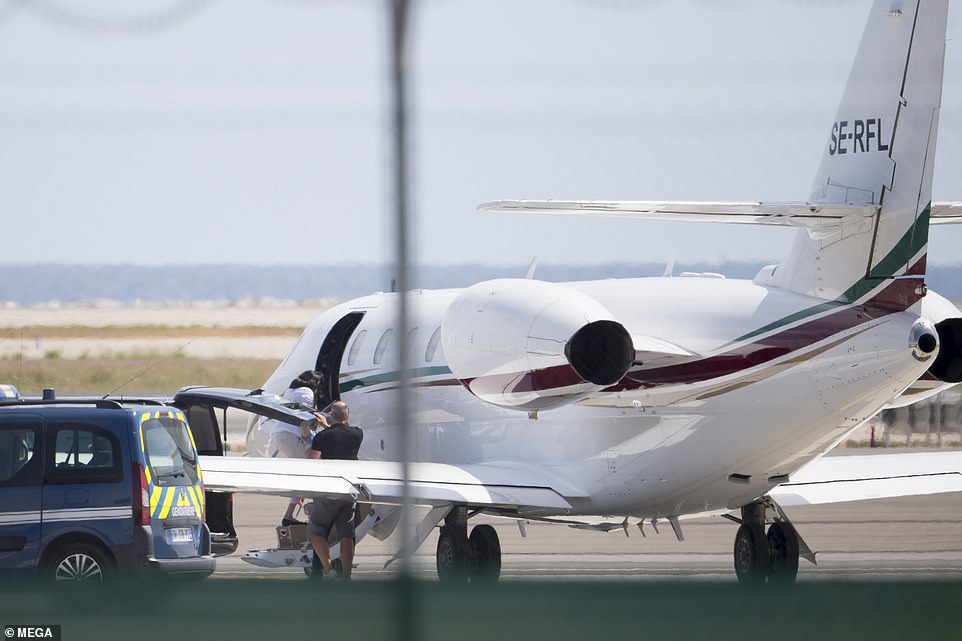 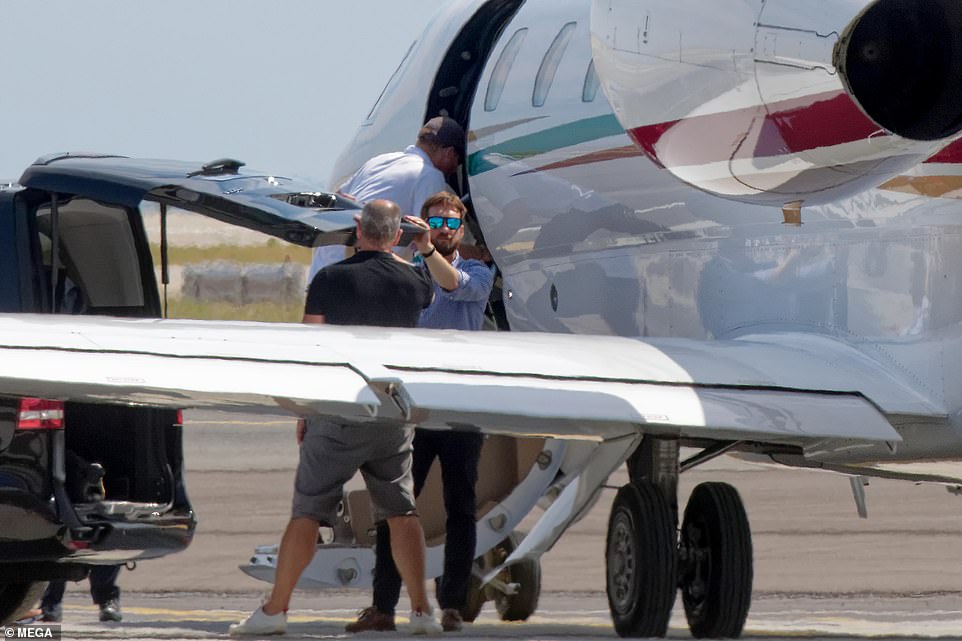 The Duke of Sussex is pictured stepping on board the aircraft at Nice Airport, in another trip by the royals by private jet 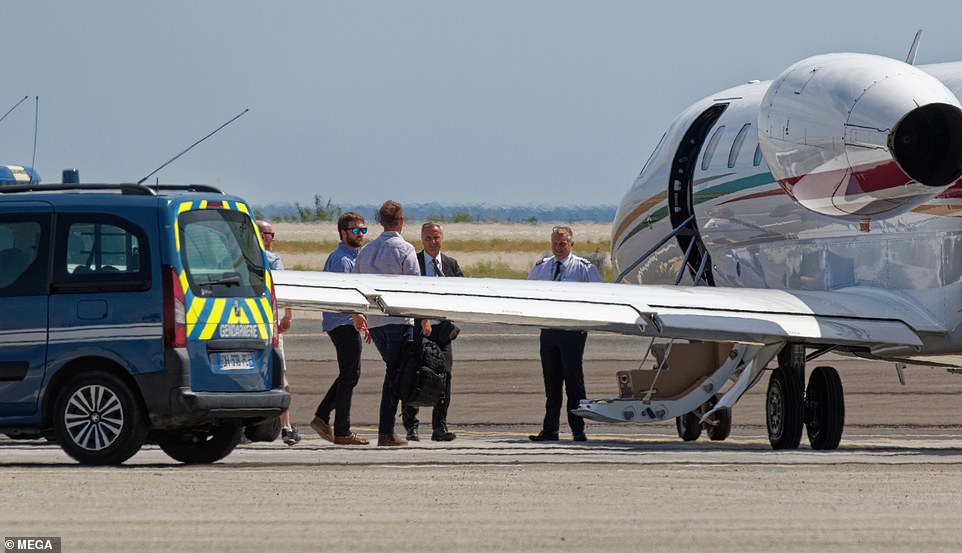 The royals have not commented on the latest trip. On August 6, the first day of the holiday to Ibiza, the only private plane travelling to Ibiza from Farnborough Airport was a Gulfstream 200, which can hold up to 19 people.

It left at 7.49am UK time and touched down on the Balearic island at 10.49am local time.

Six days later, on Monday of last week, a nine-seater Cessna 500 XL, owned by NetJets, left Ibiza at 10.14am local time and landed at Farnborough at 11.20am UK time and is understood to have been carrying the royals.

At least one leg of the journey is understood to have been booked through NetJets, which has earned the nicknames ‘Hertz For Heirs’ or ‘Uber for billionaires’ because it serves the wealthy.

It is not known who paid for the flights, which would have cost around £20,000 return. But NetJets are linked to Harry’s close friend Nacho Figueras, an Argentine sportsman known as the ‘David Beckham of polo’.

Mr Figeuras is understood to own one of the jets and often uses his social media profiles to promote them. It is also possible they may have borrowed a private jet from a friend whose plane is managed by a hire company. 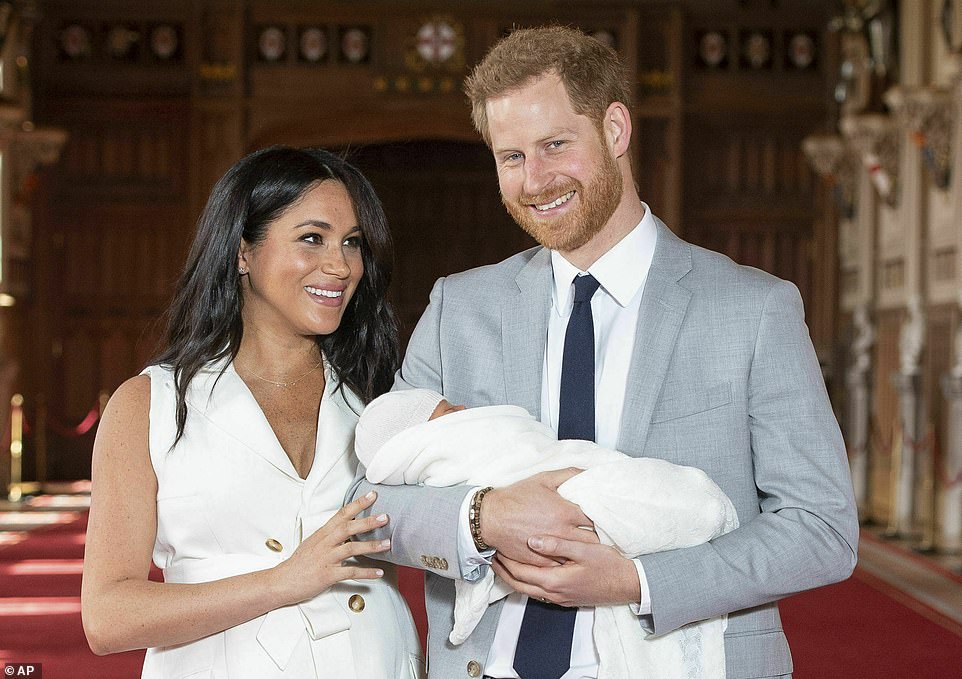 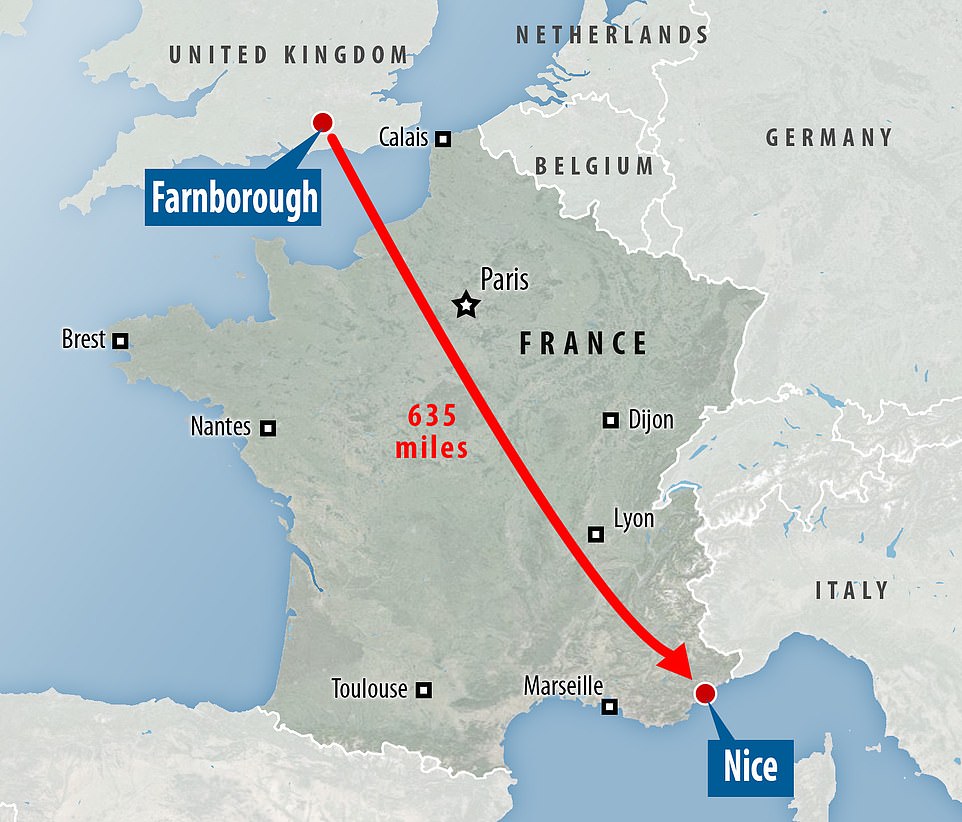 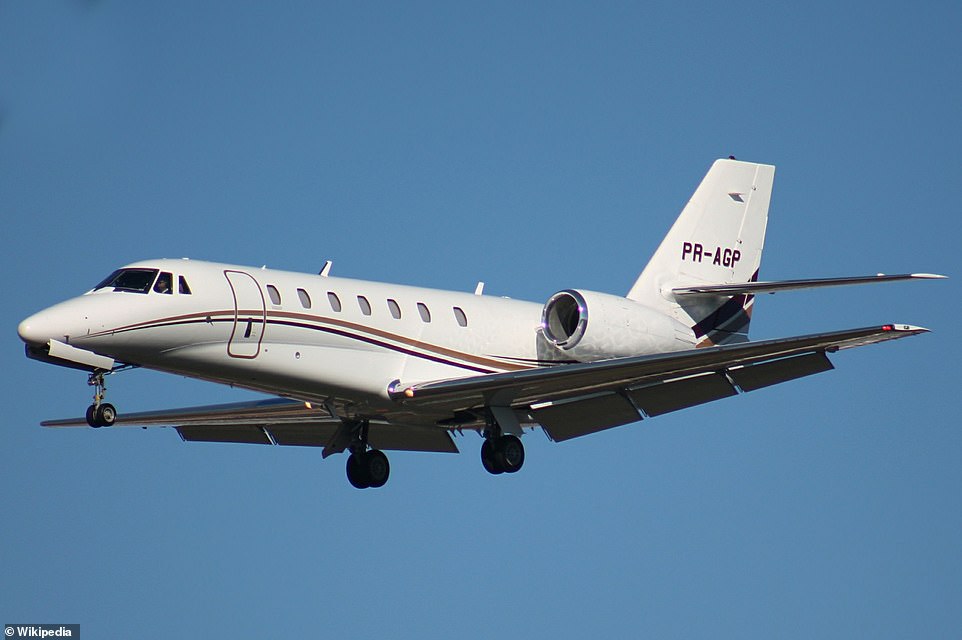 NetJets has 750 planes for hire worldwide and boasts of offering an ‘unmatched experience’ to rich clients.

Once in Ibiza, the couple stayed in the Vista Alegre gated complex of sea-facing mansions and were guarded by British and Spanish state security personnel.

There was also anger at the lack of transparency surrounding the trip, with royal representatives refusing to disclose how much it cost taxpayers.

A source on the island told MailOnline the royals landed in Ibiza on August 6 with several taxpayer-funded Metropolitan Police bodyguards.

They added that five close protection officers from the Spanish security forces joined the group escorting them to their private villa.

The most expensive villas overlooking the azure waters of Ibiza’s Porroig Bay are listed at £20,000 per week, but the price of others on enquiry rises to £120,000 per week, reported the Sun. 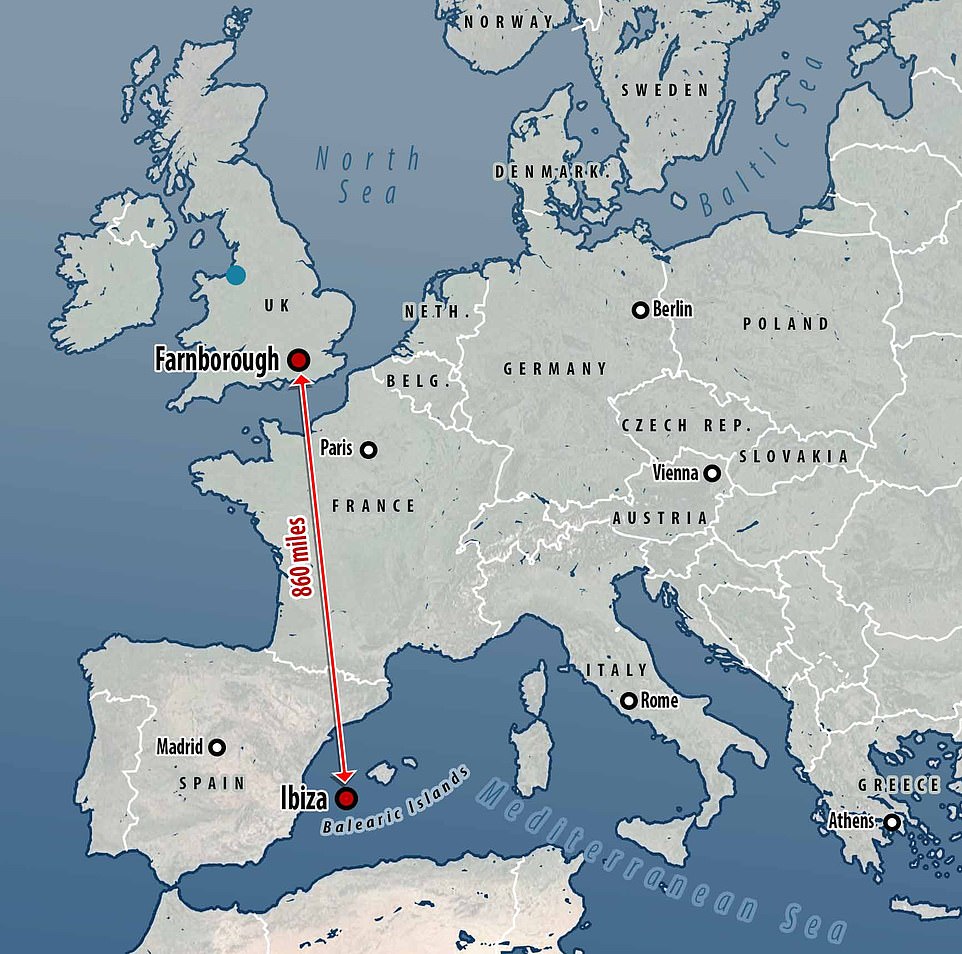 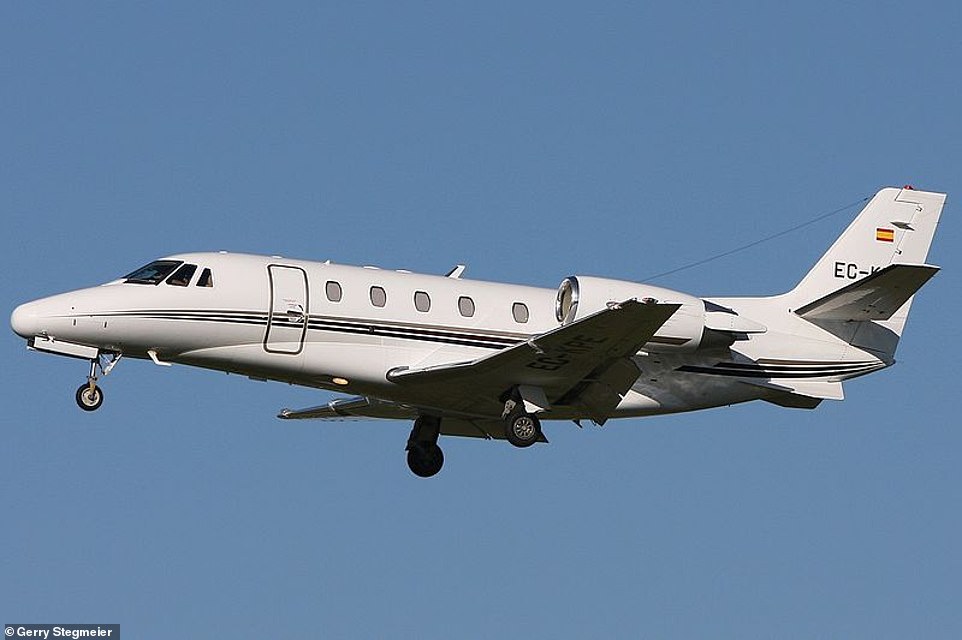 The plane used by the couple to get to Ibiza was believed to be a Cessna Citation XL, similar to the one pictured in this photo

Buckingham Palace claimed that it was a private matter and declined to comment.

Meanwhile, it was reported last week that Harry and Meghan asked the Queen if they could live in Windsor Castle when they were planning their life together.

She was said to have politely, but firmly, suggested that they move to Frogmore Cottage instead.

The couple’s decision to use a private jet for their Ibiza trip means the journey would have emitted six times more carbon dioxide per person than a scheduled flight from London to the Spanish island.

The flights there and back would have given out 12.5 tons of carbon dioxide. There are around 14 scheduled flights from London and the South East to Ibiza each day.

Their choice of transport flew in the face of their frequent public pronouncements on green issues. 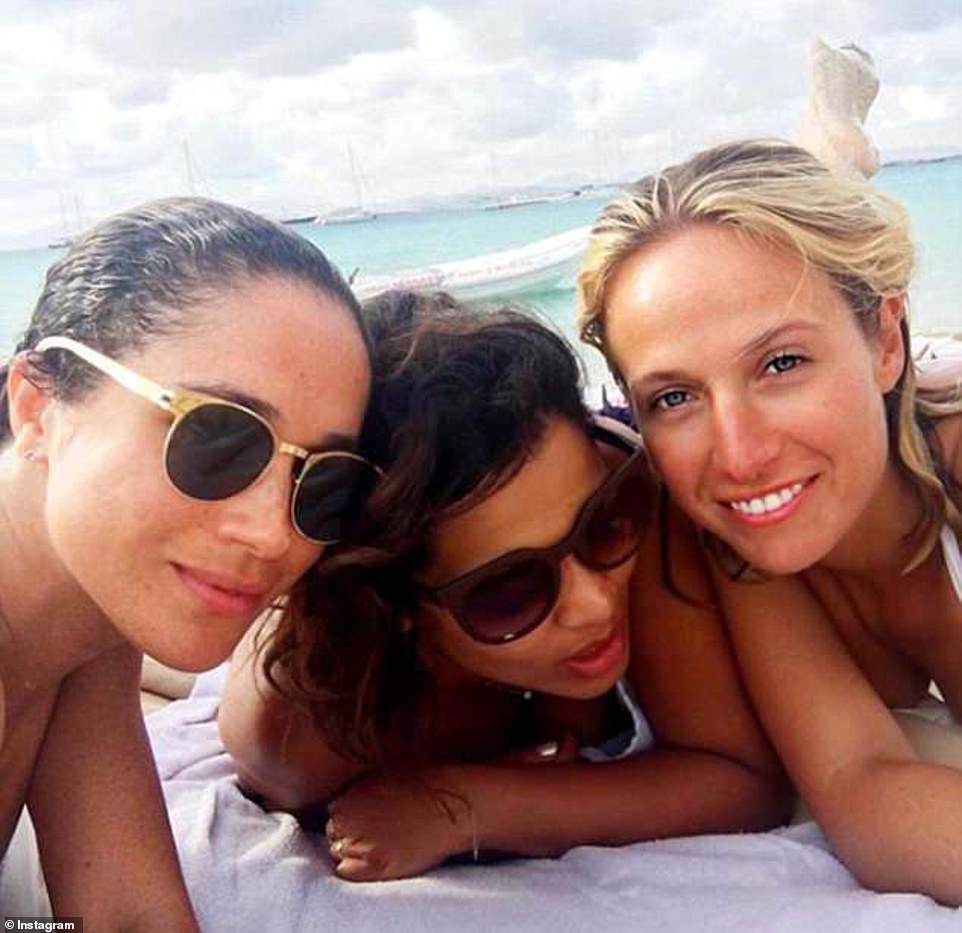 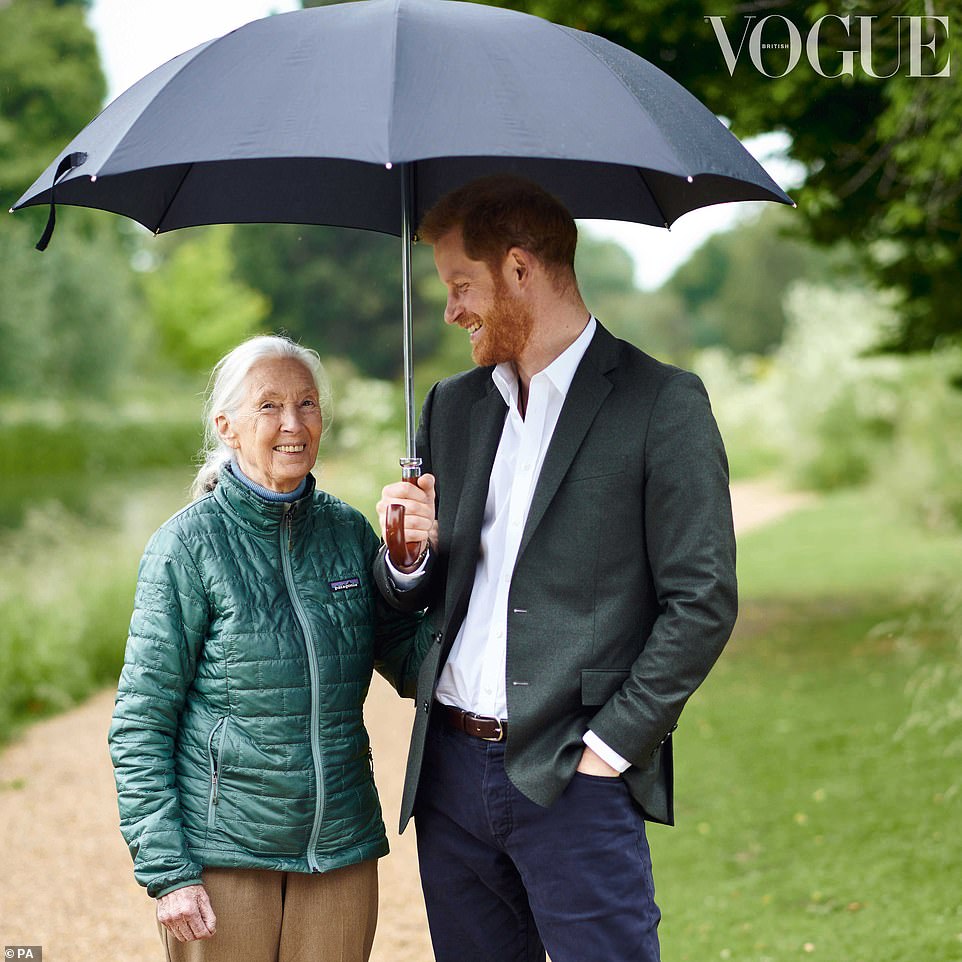 In September’s edition of Vogue, guest edited by Meghan, Harry said the couple would only have two children for the sake of the environment. The Duke of Sussex is pictured with ethologist Dr Jane Goodall who also appears in the issue

In an interview published in the September issue of Vogue with conservationist Jane Goodall, Harry revealed that he and Meghan wanted a ‘maximum’ of two children because of environmental concerns.

The issue was guest-edited by the Duchess and she chose climate change activist Greta Thunberg as one of her ‘forces for change’ to be put on the front cover. Greta, 16, travelled to New York from England by boat because she refuses to travel by plane.

The couple’s string of private-jet flights also comes after Harry attended a ‘green summit’ organised by tech giant Google in Sicily at the end of July where he delivered an impassioned speech on saving the environment.

He was reportedly barefoot as he gave his lecture to VIPs and power-brokers. However, it was claimed Google paid for his flights and a helicopter to a luxury resort where he is said to have stayed on a gas-guzzling super-yacht.

Other Royals have used cheap airlines for their flights alongside the public. Prince Harry boarded a Wizz Air flight from Luton to Transylvania in 2012 and in 2015 Prince William, 37, used a Ryanair plane to get to Scotland.

In 2011 he was also joined by wife Kate, also 37, on a Flybe flight to Zara and Mike Tindall’s wedding.