Meghan Markle and Prince Harry will join Malala Yousafzai for a virtual chat to celebrate International Day of the Girl about the challenges girls around the world face accessing education in the wake of the coronavirus pandemic.

The Duke, 36, and Duchess of Sussex, 39,  who are currently living in their $14 million Santa Barbara mansion having stepped back from royal duty in March, will share a video of their conversation with the activist, 23, online on Sunday to mark the day.

The royals discussed the importance of a girl’s right to a fair education with the Nobel laureate and spoke about how the Covid-19 outbreak has had a disproportionate impact on young women’s access to education.

Earlier this year, Malala graduated from Oxford University having survived being shot in the head by a Taliban gunman at the age of 15 after campaigning for girls to be educated in her native Pakistan.

Meghan Markle, 39, and Prince Harry, 36, are set to join activist Malala Yousafzai, 23, for a  virtual chat to celebrate International Day of the Girl on Sunday

The full video will be released on the fund’s YouTube Channel and website on Sunday October 11 at 4pm UK time.

Before the pandemic, around 130 million girls around the world were not in school.

But research by the Malala Fund has suggested 20 million more secondary-school aged girls may never return to the classroom following the health crisis.

Ms Yousafzai was shot in the head by a Taliban gunman at the age of 15 after campaigning for girls to be educated in her native Pakistan. 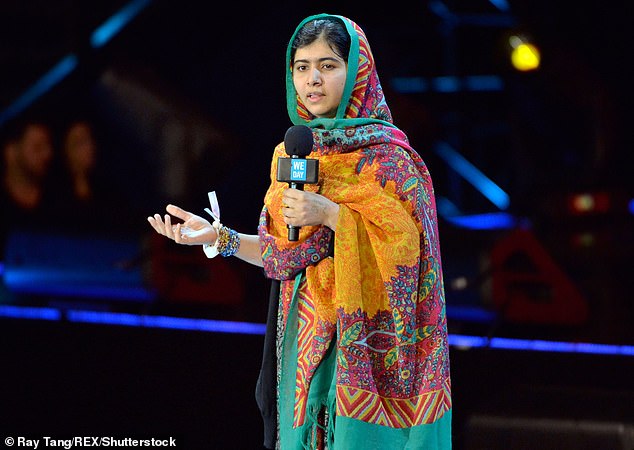 Earlier this year, Malala graduated from Oxford University having survived being shot in the head by a Taliban gunman at the age of 15 after campaigning for girls to be educated in her native Pakistan

Malala, who was airlifted to Britain after the shooting and made a full recovery.

She later founded the non-profit fund to support her work raising awareness of the difficulties facing girls accessing education, and went on to become the youngest-ever Nobel Peace Prize winner in 2014.

She has since received a degree from Oxford after finishing her schooling in Birmingham.

Meanwhile the duchess has long campaigned on female education and has spoken of how a lack of access to education is the single most important barrier to gender equality.

While Prince Harry previously met with Malala at the 2014 WE Day assembly in London, it is unknown if Meghan has ever spoken with the activist before.

The news comes days after a body language expert claimed the Duchess showed signs that she ‘doesn’t like being told she’s not the only powerful woman’ during a recent Fortune’s virtual summit. 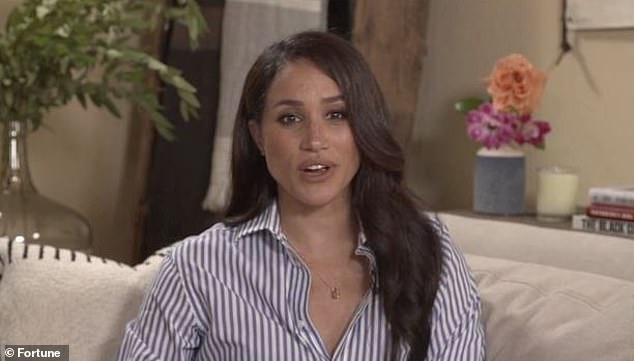 Speaking to The Mirror, body language expert Bruce Durham claimed not all aspects of the royal’s interview, in which she claimed she pays no mind to public ‘flattery or criticism’ – while also hitting out at the media for ‘misinterpreting’ remarks she has made in order to make them sound more ‘controversial’ or ‘inflammatory’, were authentic.

He pinpoints the exact moment he feels the Duchess shows signs of being uncomfortable – and puts it down to the moment Fortune senior editor Ellen McGirt tells her she’s ‘not the only powerful woman involved in this equation’.

‘She doesn’t receive it like that, she receives it as a threat,’ he explained. ‘Up until then the interviewer is still heaping praise on Meghan.’

He went on to say that she gives away several key signs to suggest that her ‘ego is raging’ – including brushing her hair in a bid to ‘reframe’ herself to look like a powerful woman.

He added: ‘Lots of eye blocks, she wants to be the person in the room. Watch her throat, tightening of the throat, it’s an animalistic reaction. She does not like hearing she’s not the only powerful equation.’

During the interview, Meghan also insisted she does not actually focus on anything written about her – be it negative or positive – turning to a quote from artist Georgia O’Keeffe to express her views about ‘flattery and criticism’.

‘I have already settled it for myself so flattery and criticism go down the same drain and I am quite free,’ she quoted, while adding her own sentiments, claiming that she feels ‘liberated’ from opinions about her.

However, the body language expert claimed the Duchess of Sussex shows negativity by offering a ‘shrug of the lips’ and constantly looking down.