The Duke and Duchess of Sussex have today taken their son Archie with them to have tea with Archbishop Desmond Tutu and his wife on the third day of their whirlwind tour of South Africa.

The Sussexes this morning released adorable footage of them carrying their four-month-old, with the caption, ‘Arch meets Archie!’.

Meghan and Harry are with the leading figure from South African life and his wife Leah Tutu at their legacy foundation in Cape Town.

The couple arrived at the foundation and were greeted by the Archbishop and his daughter, Thandeka Tutu-Gxashe.

The Sussexes this morning released adorable footage of them carrying their four-month-old, with the caption, ‘Arch meets Archie!’ 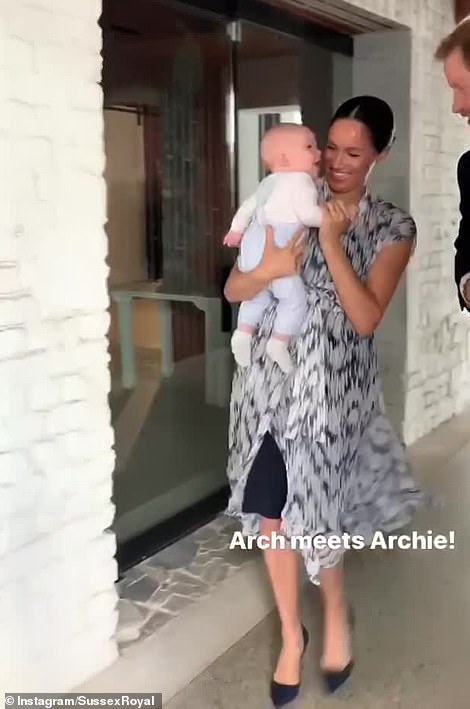 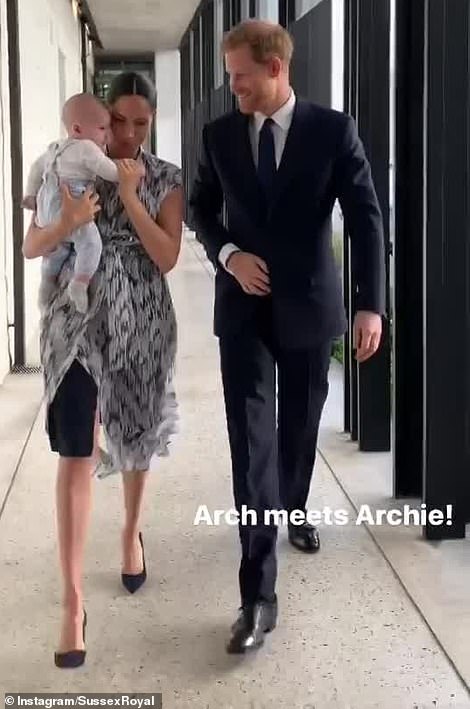 Harry and Meghan are on a 10-day visit to Africa with their four-month-old son Archie and later the duke will leave his family to travel to Botswana.

He will also visit Angola and Malawi over the coming days before he is reunited next week with his wife and child in Johannesburg.

At a reception last night hosted at the residence of Nigel Casey, British High Commissioner to South Africa, the Sussexes met Tutu’s daughter and told her they were looking forward to the visit.

Founded in Cape Town in 2013, the Desmond and Leah Tutu Legacy Foundation contributes to the development of youth and leadership, facilitates discussions about social justice and common human purposes and makes the lessons of Archbishop Tutu accessible to new generations.

It is located in one of Cape Town’s oldest buildings and a national landmark, The Old Granary Building.

Prince Harry previously met with Archbishop Tutu in November 2015, when he presented him with the Insignia of an Honorary member of The Order of the Companions of Honour on behalf of the Queen, in recognition of his services to UK communities and International Peace and Reconciliation.

The human rights activist and cleric has suffered health problems in recent years and afterwards his daughter said about her father: ‘He is doing Ok. He is up and down’.

She added about the planned meeting with the duke and duchess: ‘He is looking forward to it.’

Speaking about Meghan and Harry she added: ‘They were saying that they were happy to be here and looking forward to meeting my father… and hopefully they will have some time for conversation.’

Meghan, meanwhile, will visit mothers2mothers, an Africa-based charity that trains and employs women living with HIV as community health workers.

She arrived in South Africa laden with children’s clothes, books and other items for the charity – presents donated to their son Archie.

At another event the duchess will meet 12 inspiring female entrepreneurs when she visits the UK-SA Tech Hub.

The hub focuses on skills development, capacity building, mentorship and access to markets by helping entrepreneurs, particularly women, with resources and support.