Meghan Markle and Prince Harry ‘already know the sex of their baby’ and are likely to ditch standard royal names in favour of a more symbolic, Victorian-style moniker, an expert has claimed.

The Duke and Duchess of Sussex, who now live in California after quitting as senior members of the Royal Family last year, announced they are expecting their second child on Valentine’s Day.

The couple released a black and white photograph taken under a ‘fertility tree’ in the garden of their £11million home in Montecito.

Royal biographer Ingrid Seward said she believes Meghan, 39, and Harry, 36, already know the gender of their baby because ‘that is the LA way’ – and suggested they may opt for a more off-the-wall name now they’re free of royal constraints.

The Duke and Duchess of Sussex, who now live in California after quitting as senior members of the Royal Family last year, announced they are expecting their second child on Valentine’s Day

‘I’m certain that neither of them will feel obliged to use any of the standard royal names,’ she explained. ‘I’m sure they will already know the sex of the baby, as that is the LA way.

‘I imagine they might go for the Victorian style names which are all symbolic of colours.

‘For a boy, they may choose Red, which is Redmond, Blue or Grey. Whereas for the girl choices, I can see them turning to the flowers – Daisy, Primrose, Violet or Ivy. I certainly don’t think they’ll be following Gwyneth Paltrow’s steps by looking to fruit.’

Ingrid added that she wouldn’t be surprised if they choose Diana if it’s a girl – one of the current bookies’ favourites – as a tribute to Harry’s mother.

Ladbrokes has Alfie and Alexandra as frontrunners, both with odds of 4-1, and the betting on the baby’s sex has seen both a boy and girl priced at 10-11. 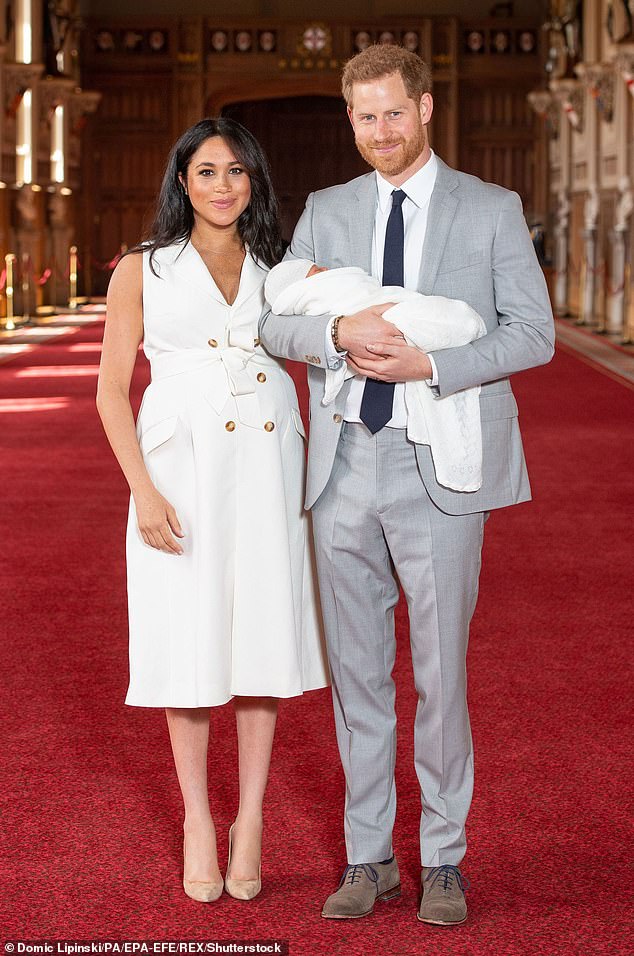 When Meghan was pregnant with Archie, she caused a furore with her lavish $500,000 New York baby shower held in the penthouse of the Mark Hotel, which reportedly left senior courtiers ‘spitting out their morning tea’ when pictures of the luxurious affair emerged.

Ingrid said she has ‘no doubt’ the duchess’ glamorous LA lifestyle will play a part in her second pre-birth celebration, and suggested new neighbour Oprah Winfrey may be first in line to plan it.

‘I think Meg’s girlfriends will be fighting for the privilege of giving her a baby shower this time around,’ Ingrid observed.

‘Perhaps Oprah might step up to the role as she is a neighbour now? Saying that, though it’s tradition that friends throw the shower, her nearest and dearest may host it at Meghan’s house – it will no doubt still be very elaborate compared to how we Brits do it. If her last shower is anything to go off, expect harpists and a boujee banquet.’

Harry and Meghan recorded a tell-all interview with the chat show host on Wednesday and Thursday last week – just hours before issuing a parting shot after being stripped of their roles and patronages by the Queen, it was revealed yesterday. 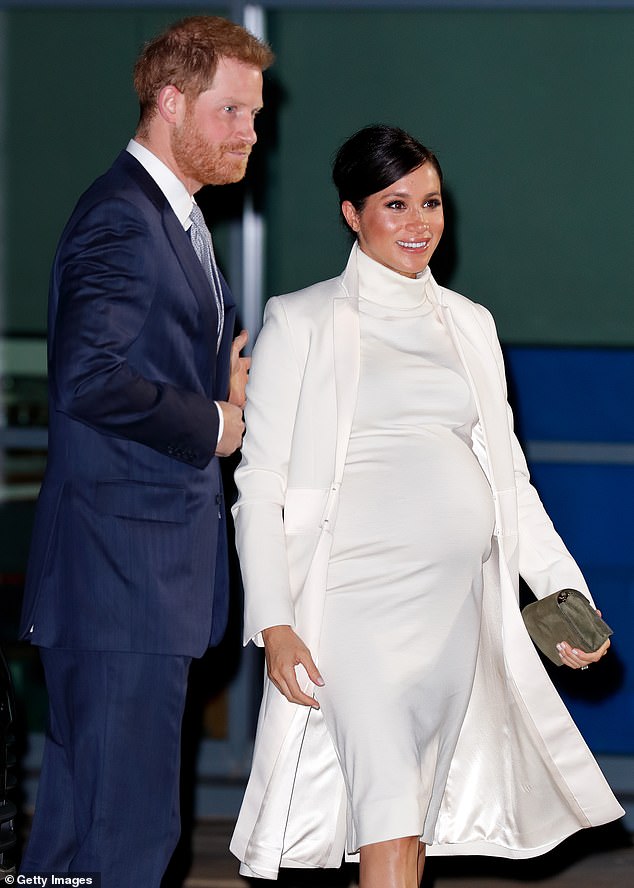 When Meghan was pregnant with Archie (pictured with Harry in London in February 2019), she caused something of a furore with her lavish $500,000 New York baby shower held in the penthouse of the Mark Hotel

The interview is due to be broadcast on March 7 and a person close to the couple told the Sunday Times that Meghan believes the prime-time broadcast gives her the ‘loudest way she’ll get her voice back’.

‘Now that they’ve made a break away from royal tradition, we believe that Meghan will want to make this second pregnancy her own – without influence from the Royal Family,’ she explained.

‘Due to how we’ve all had to treat our homes as sanctuaries this year, we believe she’ll host a lavish celebration in her home in the US, instead of at an establishment like The Mark Hotel.

‘Judging by her previous baby shower guest list, I would imagine that her former Suits co-star Abigail Spencer will be in attendance, as well as her neighbour Oprah, designer Misha Nonoo and her close friends Priyanka Chopra and Jessica Mulroney.

‘In terms of colour scheme, we’re sure she’d turn to more rustic, botanical baby shower decorations such as wooden features and greenery. Advocates of a sustainable lifestyle, especially after announcing her pregnancy on Instagram wearing the same dress she wore whilst carrying Archie, it’s likely they’ll go for eco-friendly, biodegradable decorations too.

‘There won’t be a stitch of royal blue in sight.’