While the Duchess of Sussex jetted back to the UK in a private plane following her New York baby shower, two of her guests were forced to spend hours in the airport after their commercial flight was delayed overnight.

Former Suits co-star Abigail Spencer, 37, and pilates guru Taryn Toomey were among those who joined mother-to-be Meghan, 37, for the lavish celebrations, co-hosted by Amal Clooney and Serena Williams in a $75,000 penthouse hotel suite.

But the pair were left stranded on their way to Los Angeles when their United Airlines flight UA275 from Newark at 6pm Wednesday was delayed by six hours – before eventually being rescheduled to Thursday.

Documenting their travails on Instagram, Abigail and Taryn even joked about booking a charter plane through on-demand company SkyJet – all while their friend Meghan was settling into her own private flight back to London.

Baby shower guests Abigail Spencer, 37, pictured, and pilates guru Taryn Toomey were left stranded on their way to Los Angeles when their United Airlines flight from Newark Airport at 6pm Wednesday was delayed by six hours – before eventually being rescheduled to Thursday 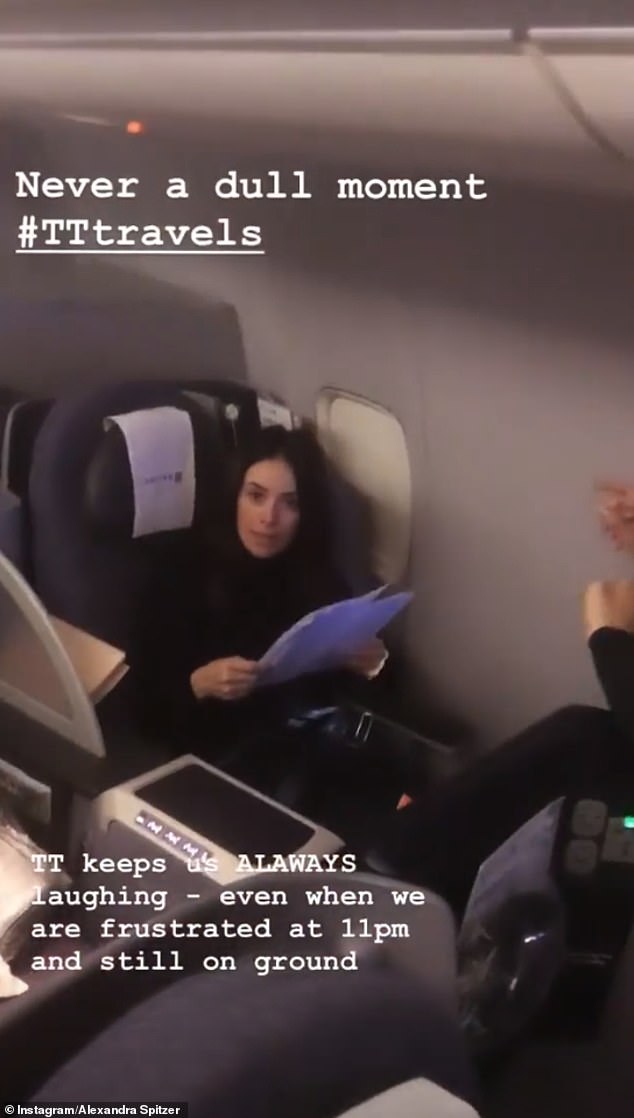 After a six-hour delay the women were boarded onto a plane before being told to disembark as the flight would depart Thursday morning. Pictured, Abigail attempts to learn some lines 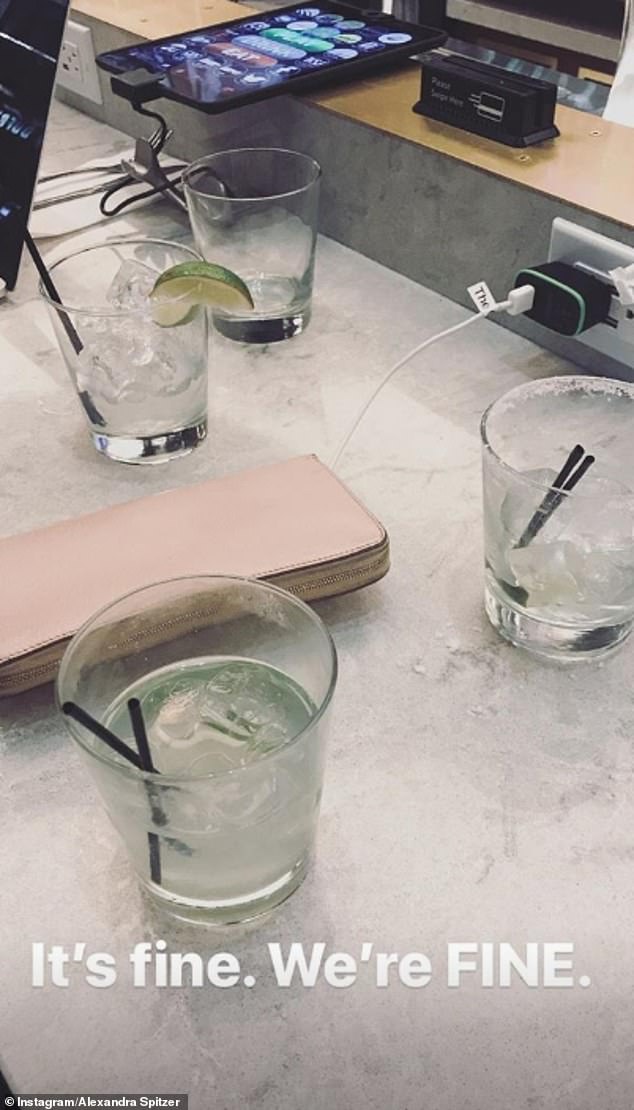 Documenting their travails on Instagram, Abigail and Taryn, who were travelling with pilates instructor Alexandra Spitzer, revealed they enjoyed some drinks at the bar, pictured

Meanwhile their friend the Duchess of Sussex boarded a private plane shortly after leaving the Upper East Side hotel, pictured, where she spent her baby shower celebrations

The Duchess of Sussex’s plane touched down in Farnborough Airport on Thursday morning, where two Range Rovers waited to collect the royal, pictured leaving the airfield

The seven-months-pregnant duchess was pictured boarding the private plane on Wednesday evening, less than an hour after she was seen leaving her swanky Upper East Side hotel – which served as the venue for her star-studded baby shower.

Meghan’s extremely luxurious mode of transportation back to the UK – a Gulfstream G450 twin jet plane – is thought to have cost a staggering $125,000 for the six-hour journey back to the UK from the Big Apple.

The 37-year-old royal is also thought to have arrived in New York via private jet, meaning that a phenomenal $250,000 was spent on her round-trip travel for the personal girls’ trip.

Meanwhile Abigail and Taryn, who travelled with pilates instructor Alexandra Spitzer, are unlikely to have spent more than a few thousand dollars on their cross-country flight. 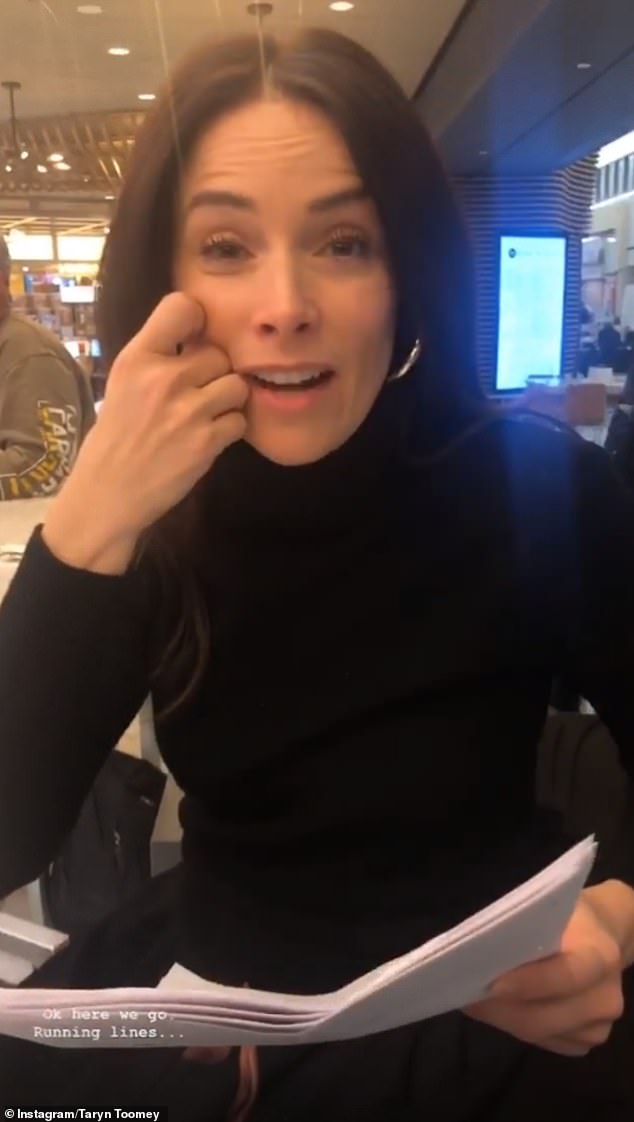 Meghan’s close friend Abigail Spencer, pictured, was desperately trying to learn lines during the delay at Newark on Wednesday night. She was among those celebrating Meghan 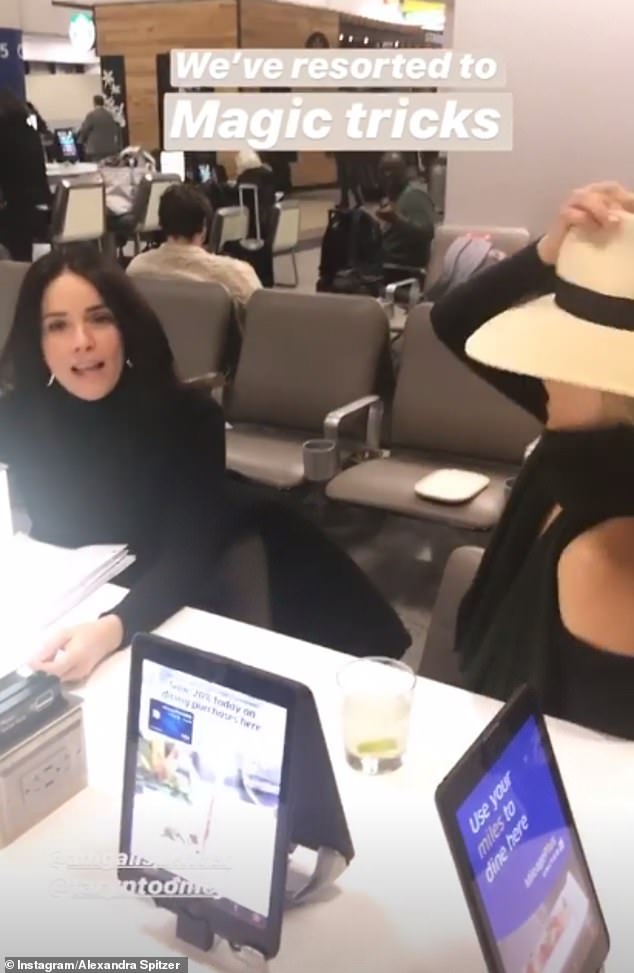 Abigail, left, and Taryn, right, resorted to dressing up and doing magic tricks in a bid to keep themselves amused as they waited for their flight. Abigail met Meghan on the set of Suits 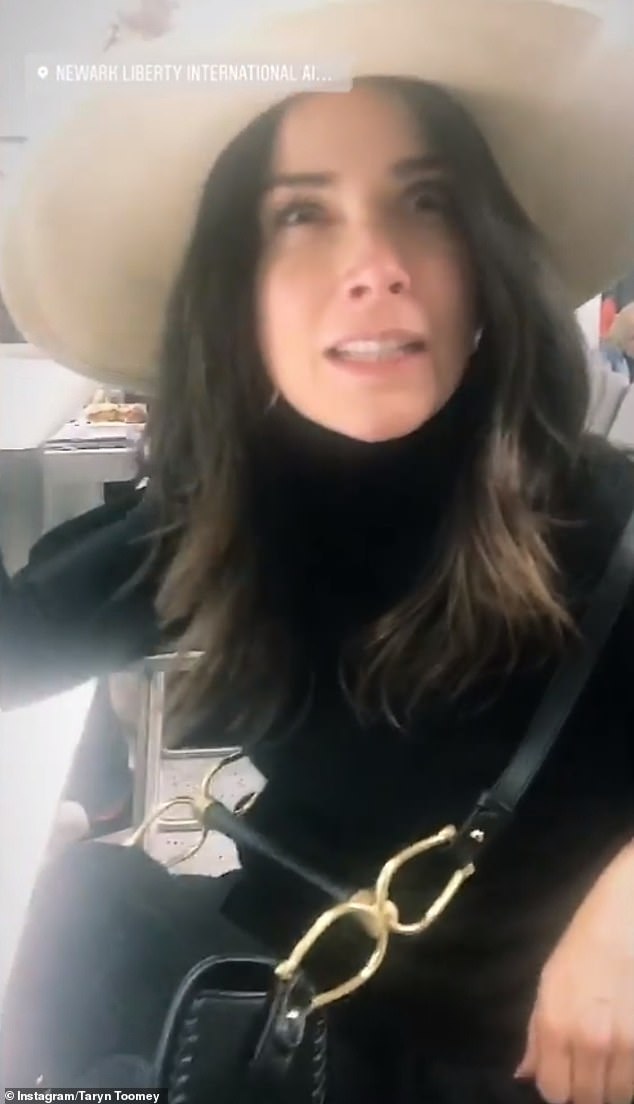 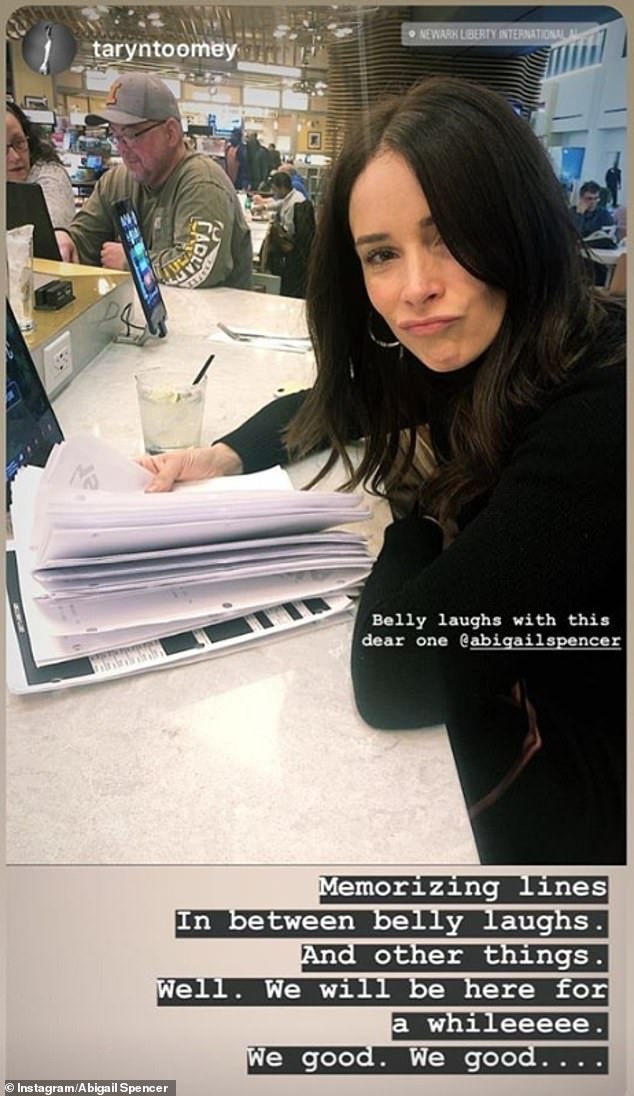 Actress Abigail put the time to good use and sat memorising her lines in Newark Airport, above

Originally due to depart at 6pm, passengers were later told it would depart at 8.30pm, before it was pushed back again to 10.10pm.

The women eventually boarded the flight shortly before midnight – only to be told was being delayed again until 8am Thursday morning.

Latest flight information from United Airlines suggests it will now depart at 10.45am Thursday, bringing the total delay to almost 17 hours.

An updated on the United Airlines website last night read: ‘Unfortunately, crew scheduling disruptions caused by snow and ice in the Newark/New York area in have delayed [the] flight until tomorrow.’ 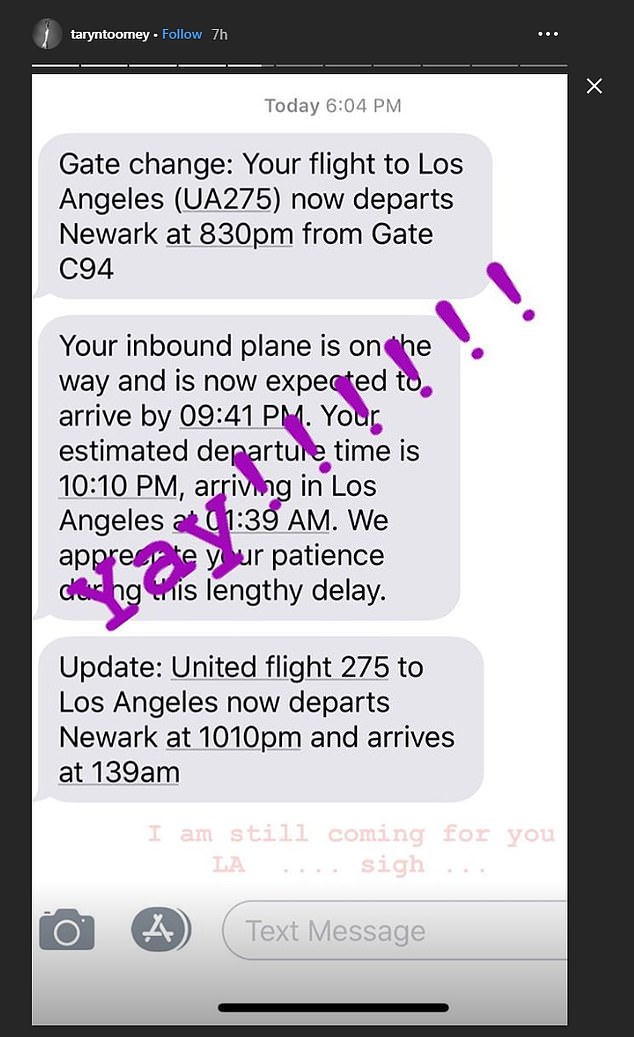 The women were given false hope when it was announced their plane would depart at 10.10pm, after being pushed back from the original 6pm departure time 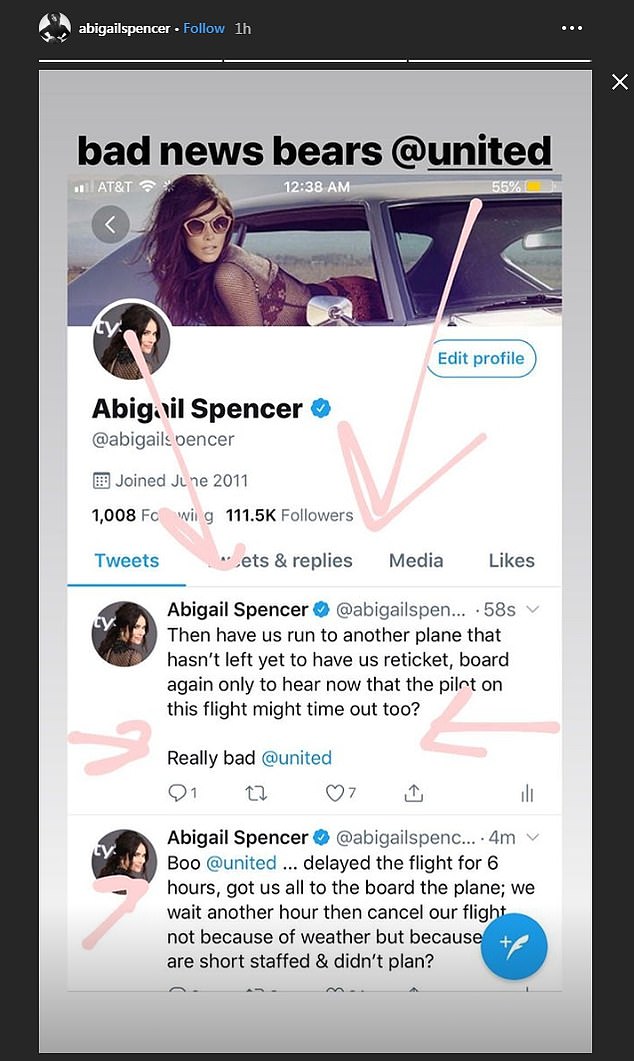 Sharing a photo of her Twitter feed on Instagram, Abigail revealed the plane had been delayed for 6 hours before they were asked to leave the plane and re-board another. That plane also did not take off

Instagram videos and posts from the airport show how Abigail and Taryn remained in good spirits, while Abigail tried to learn her lines.

On Monday, Kensington Palace confirmed that Meghan’s travel for the six-day trip had been ‘privately funded’ because it was a personal getaway but the spokesman would not comment on any other details of her visit to New York, and declined to give any official information about her security detail, or her plans while she was staying in the city.

The duchess’s departure from New York comes at the end of a busy five-night, six-day trip that saw her catching up with friends, enjoying several meals at some of the city’s best restaurants, and, of course, being the guest of honor at her baby shower on Wednesday before flying home. 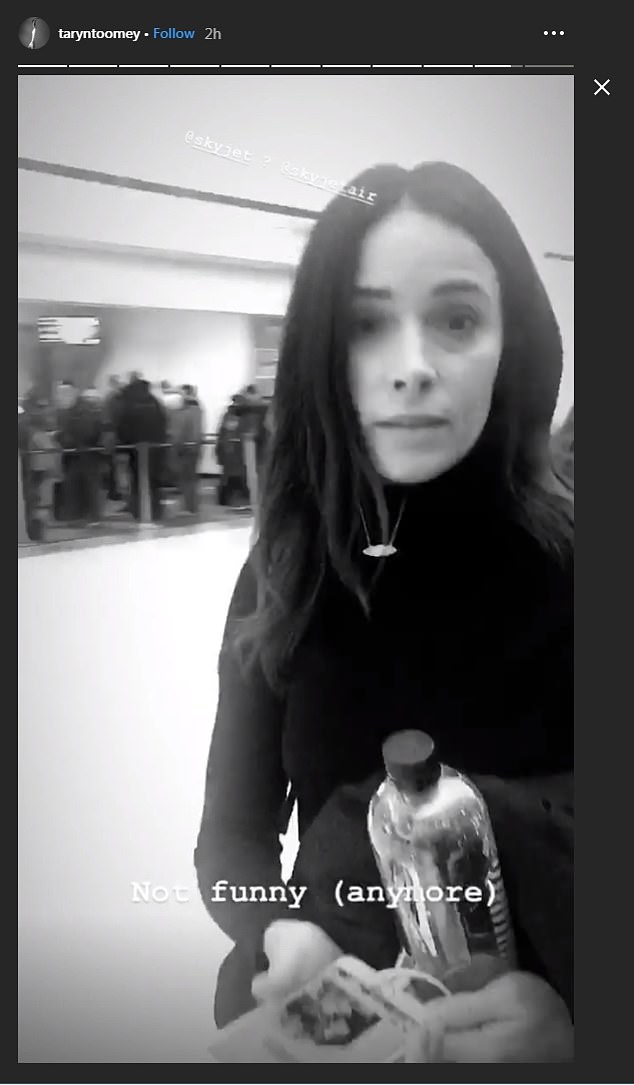 Walking back through the airport after disembarking, Abigail joked they should use on-demand private charter flight company SkyJet to book their own plane home 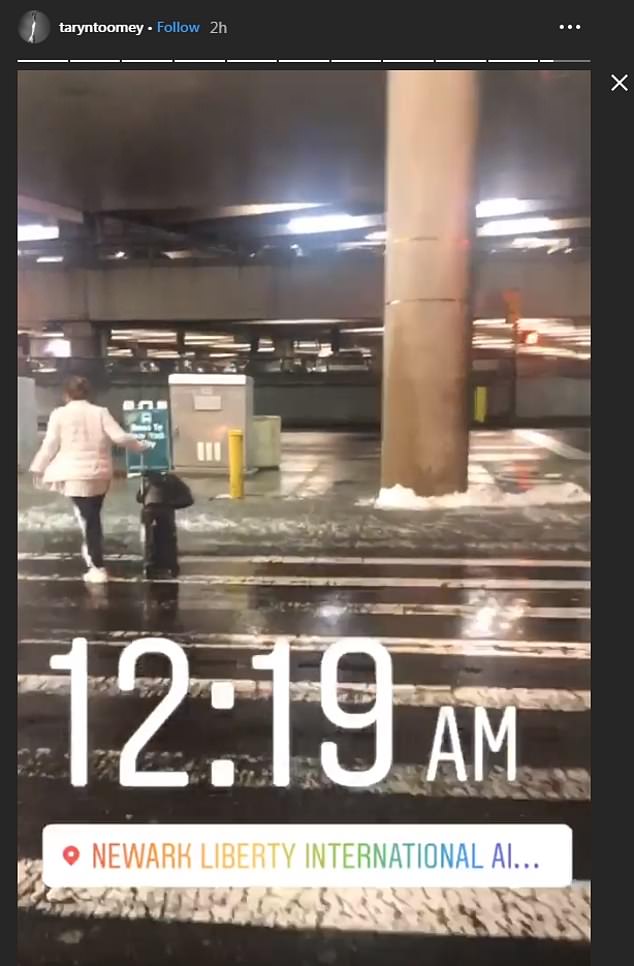 Taryn’s last Instagram Story update showed her leaving Newark Airport shortly after 12am Thursday morning. Their flight had been due to depart at 6pm Wednesday

Despite her seemingly hectic schedule over the last few days – which saw her spending time with friends at hotspots like The Surrey hotel, The Polo Bar, and the Met Breuer – Meghan looked fresh-faced and glowing as she was pictured leaving The Mark a few hours after her baby shower ended.

Meghan appeared to be ready to settle down in the comfort of her private plane, and was far more dressed down than we have seen her recently, eschewing her heeled boots and chic nude pumps in favor of figure-hugging black leggings and a matching sports top that accentuated her large bump.

She also wore a black cap with the word ‘Rectify’ written across it, which appears to have been a gift from her friend and former Suits co-star Abigail Spencer, who actually arrived at the hotel for the baby shower earlier in the day wearing the exact same design. Rectify was the name of a SundanceTV series that Abigail starred in between 2013 and 2016.