The former Mr Meghan Markle showed off his own sparkle on Saturday night, as he was married for the second time in a posh and pricey ceremony held just days before his ex-wife’s one-year wedding anniversary.

Trevor Engelson, 42, said ‘I do’ to his very own princess over the weekend, with the Hollywood talent manager marrying 32-year-old Tracey Kurland, a Columbia-educated nutritionist.

The newlyweds could barely contain their excitement in photos posted by friends and family members that show them walking down the aisle, sharing their first kiss and holding one another tight for their first dance.

Markle has yet to comment on her ex’s nuptials, but did post a photo of her newborn son Archie’s feet on Sunday in celebration of Mother’s Day, just hours after Engleson’s wedding.

The Duchess of Sussex did this despite the fact that the British observe Mother’s Day in March.

They did:Trevor Engelson, 42, wed 32-year-old Tracey Kurland (pair above) on Saturday at the Miramar resort in Montecito, California 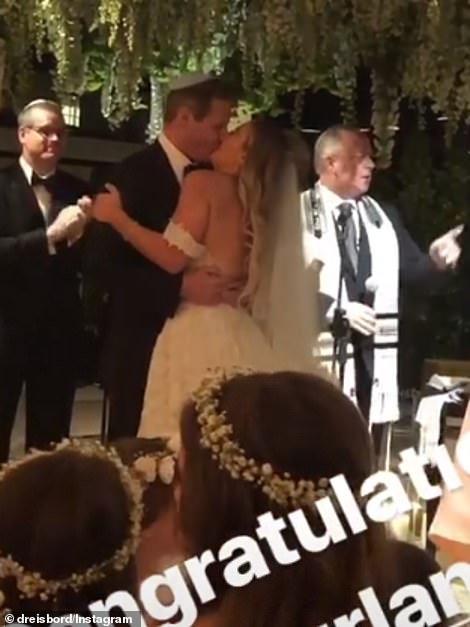 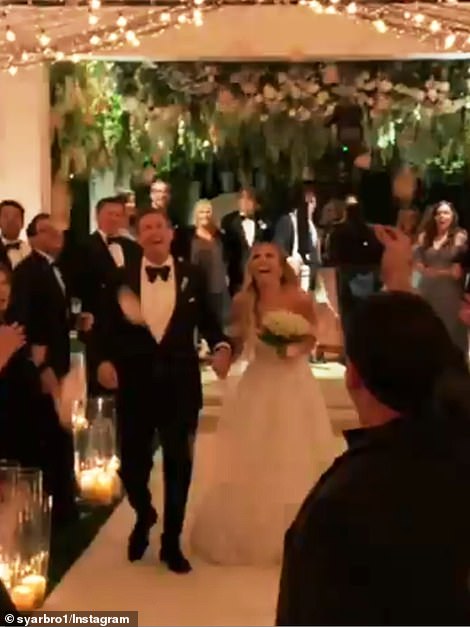 White wedding: Kurland is a Columbia-educated dietitian whose father is worth upwards of $500 million according to reports 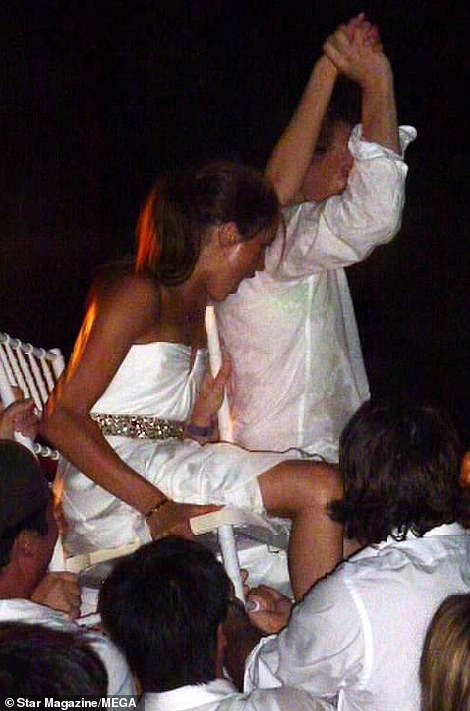 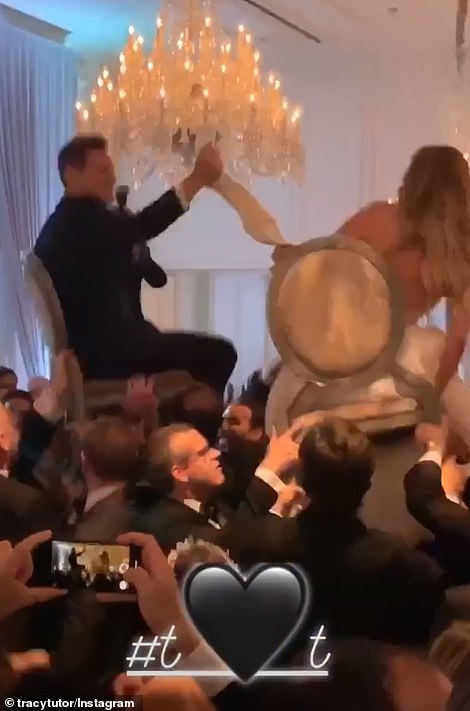 What-a?: The pair were married almost exactly one year after Engelson’s ex Meghan Markle wed Prince Harry in traditional Jewish ceremony with a rabbi, canopy and a rendition of the hora later in the night (Markle and Engelson’s wedding in left, Engelson on Saturday right) 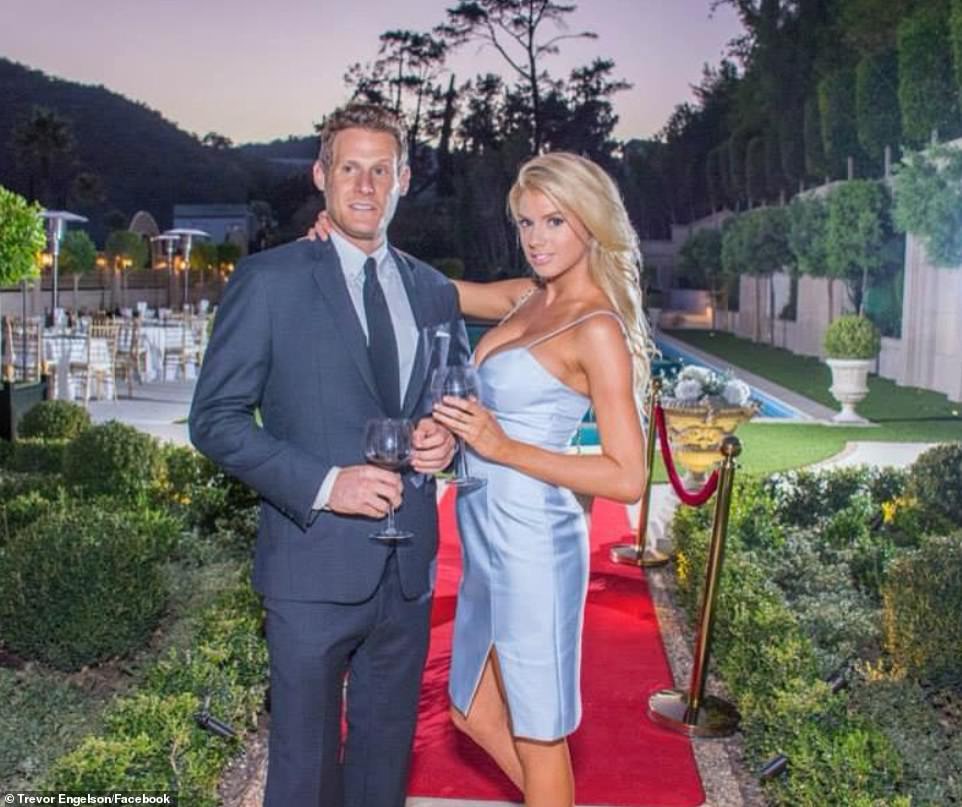 McKidding me: In the wake of that split, Engelson dated swimsuit model Charlotte McKinney in 2014 (above) despite being approximately two decades older than the then-20-year-old beauty 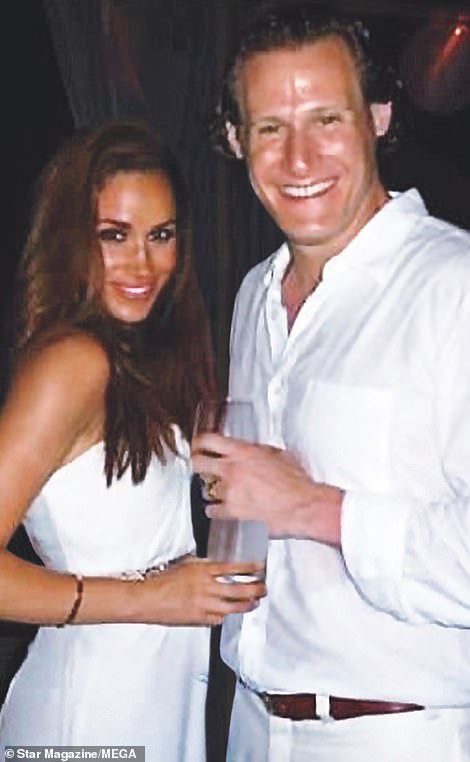 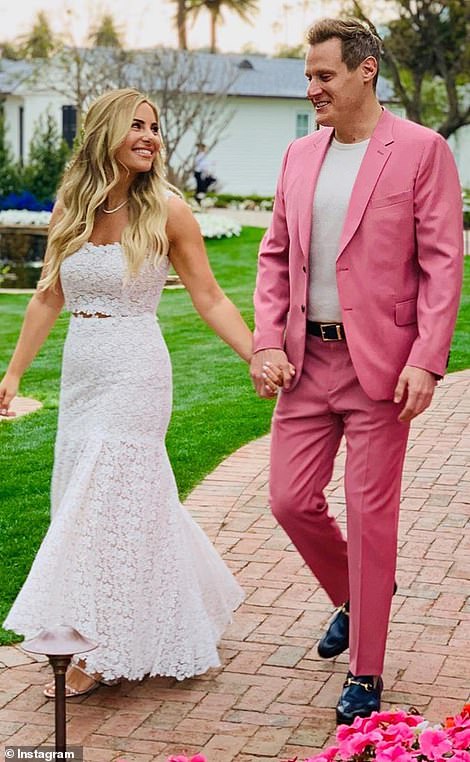 Brief affairs: Markle and Engelson dated for six years before marrying in 2011 (left), but split after just 23 months (Engelson on Friday right)

Engelson and his bride both walked down the aisle with their parents to kick off the ceremony, with the bride choosing to enter the ceremony to a live version of the 1961 Ben E King song Stand By Me.

It was a traditional Jewish wedding, with the couple marrying under a canopy and Engelson breaking a glass to conclude the ceremony.

The two then shared their first kiss before walking down the aisle as man and wife as flower petals dropped from above and rained down over the two.

It was then time to part, with guests enjoying a meal of Ceaser Salad, burgers and fries.

The raucous pair spent most of the evening letting loose with friends, resulting in the bride almost having a wardrobe malfunction at one point.

It was a far more formal event than his previous wedding, though was markedly less solemn than Markle’s ceremony in May of last year.

Engelson proposed to Kurland one month after that wedding while the pair were on a wine tour.

She was not his first girlfriend in the wake of his split from Markle, having dated model Charlotte McKinney for a few months before he split from the swimsuit model.

McKinney was 21 at the time, meaning that Engelson who almost two decades her senior.

He and Markle had been together for six years before they decided to wed, but spent just 23 months as husband and wife before they split. 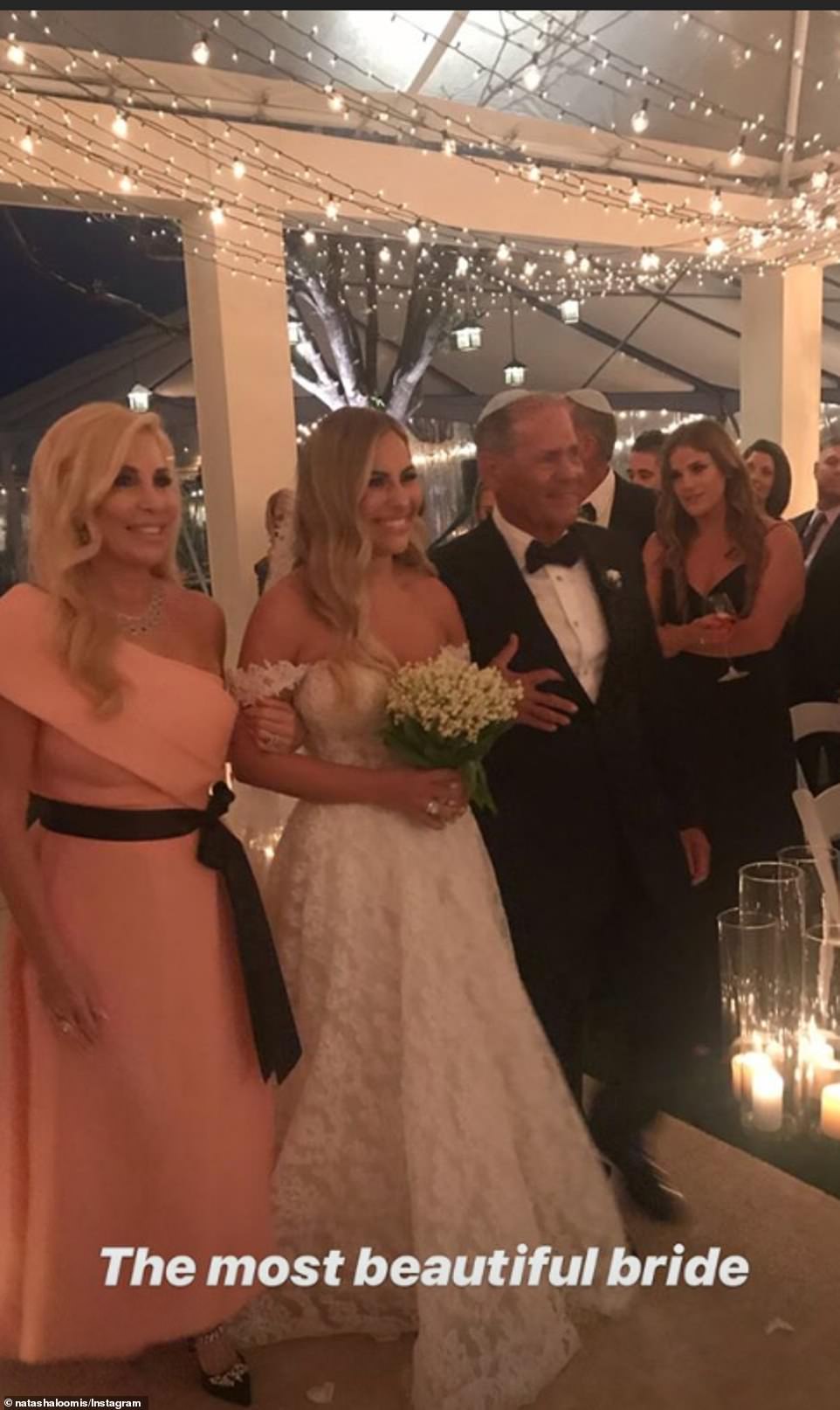 Trevor proposed to multimillionaire banker’s daughter Kurland, a 32-year-old nutritionist, last June while on a tour of California’s wine country after dating for a year 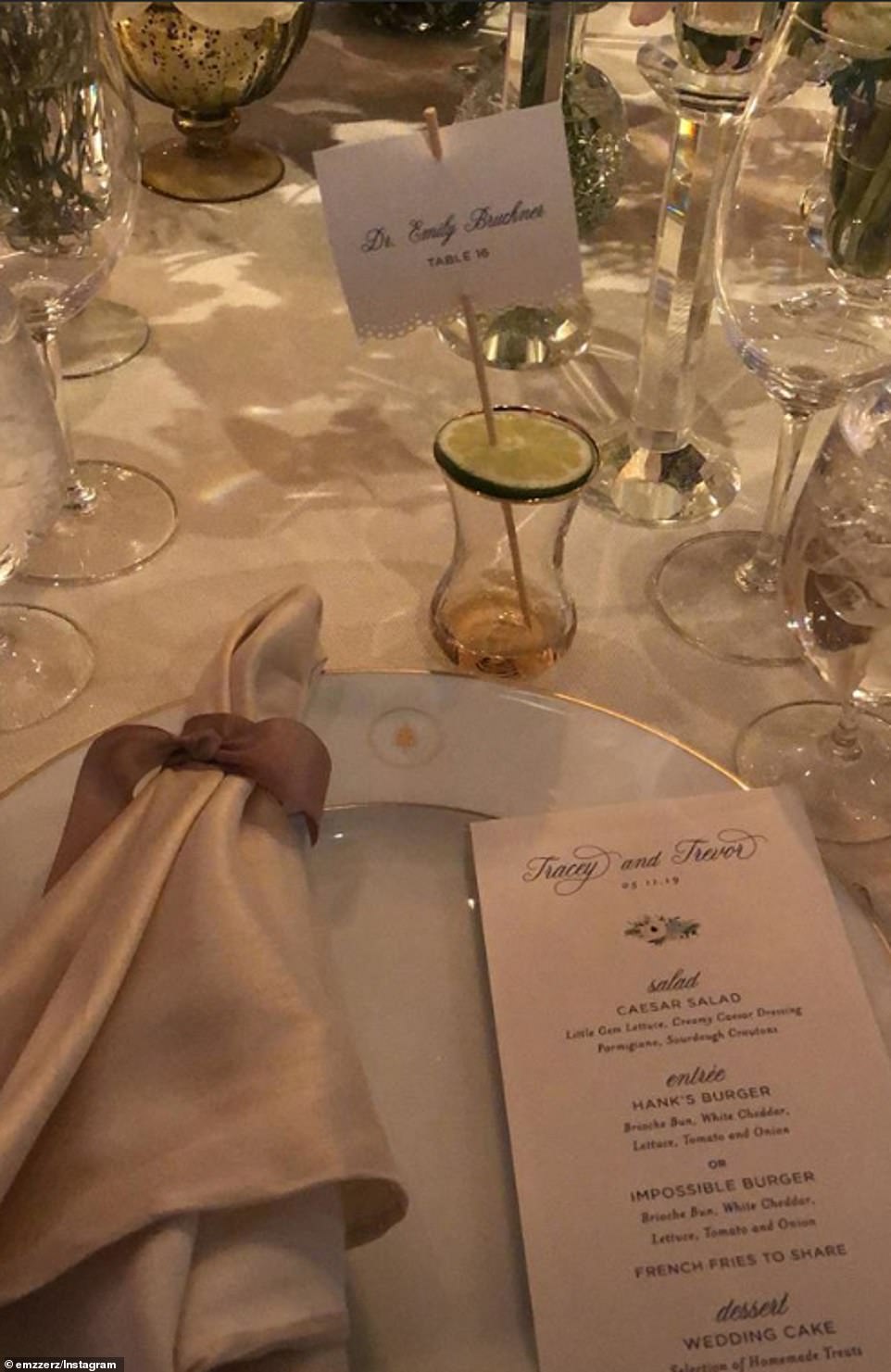 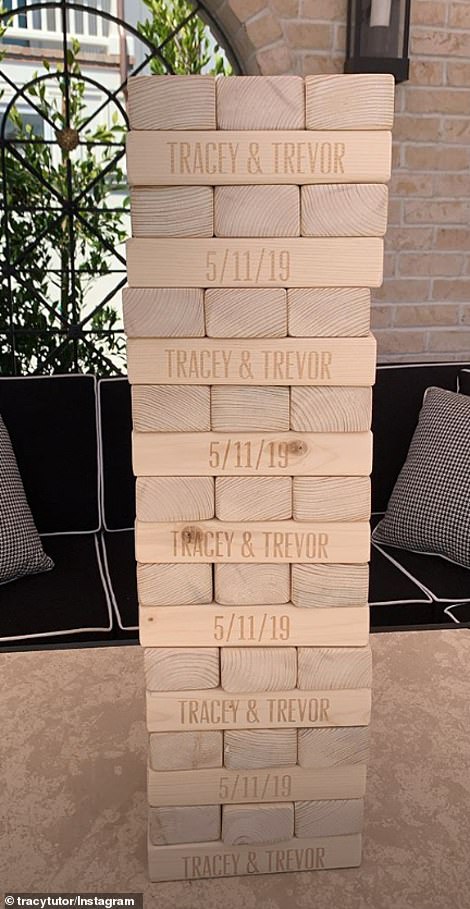 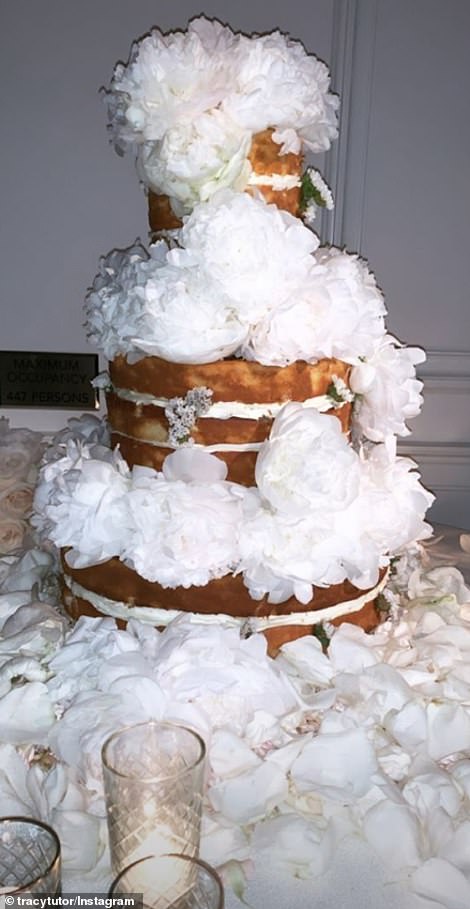 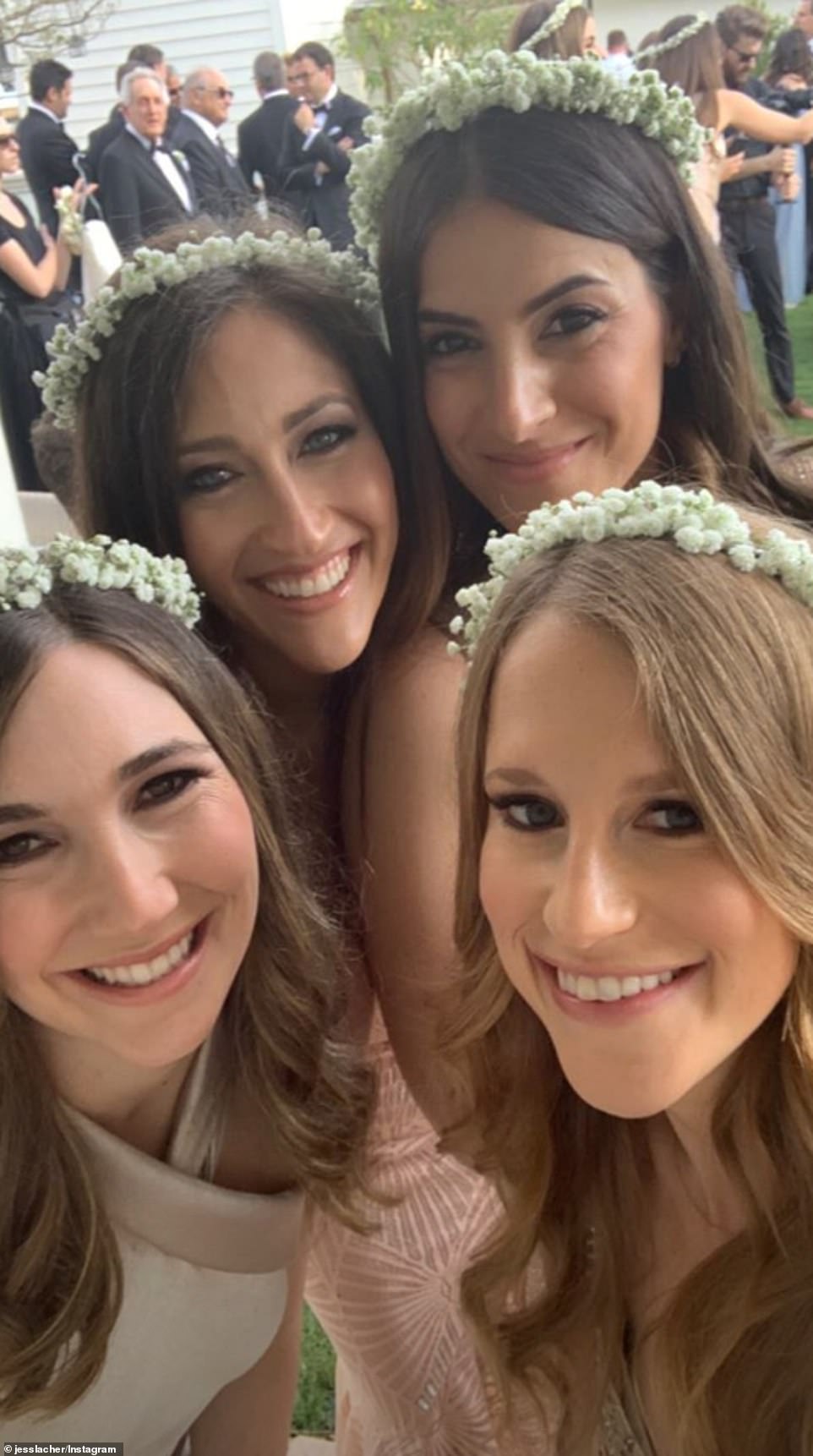 Bridesmaids including Hannah Platt, Jessica (Sackman) Lacher and Rachel Grossman are seen at the wedding of Trevor Engelson and bride Tracey Kurland 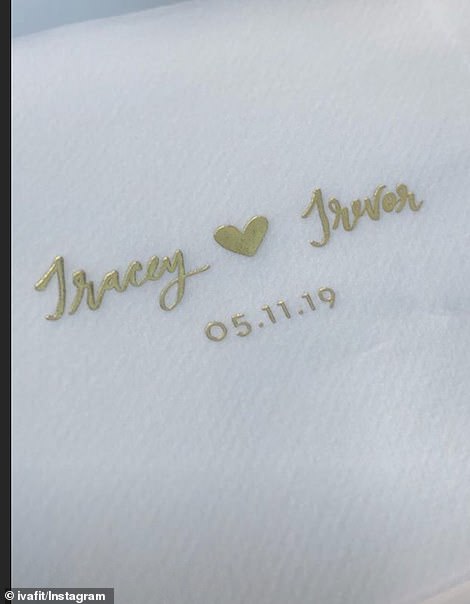 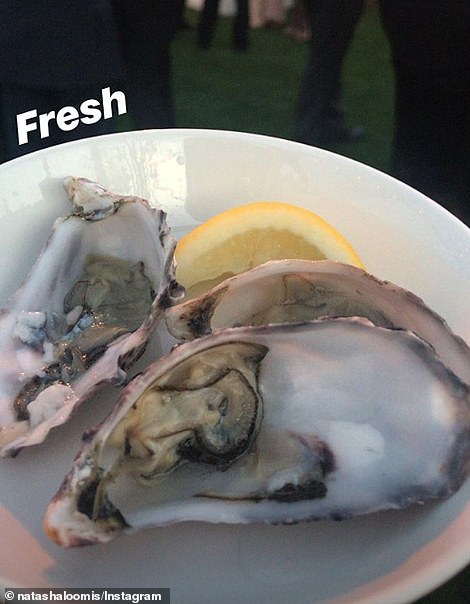 Reports have claimed that Markle’s work schedule played a role in the split, but neither member of the couple have ever commented on what led to the demise of their union.

They have both now married into some very powerful families.

And in both cases, the great wealth which those families possess has left millions of their fellow countrymen disgusted with their actions.

The parents of the bride, Stanford and Sheila, have homes in Hidden Hills and Las Vegas.

They also have a fortune that is reportedly north of $500 million.

He began working at the company in 1979 and left in 2006, just as the housing crisis began ramping up in the US. 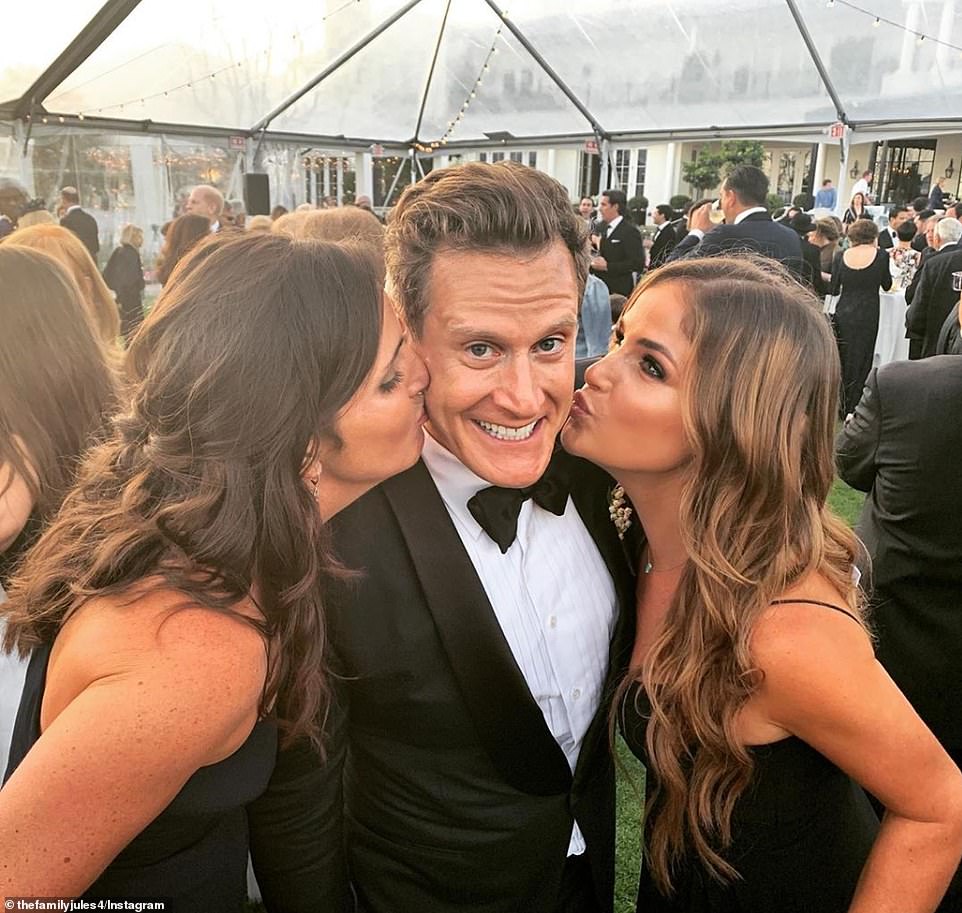 The beachfront Rosewood Miramar, where rooms start at $745 a night, proved to be a tasteful venue for the festivities, which will be held in a tented outdoor space 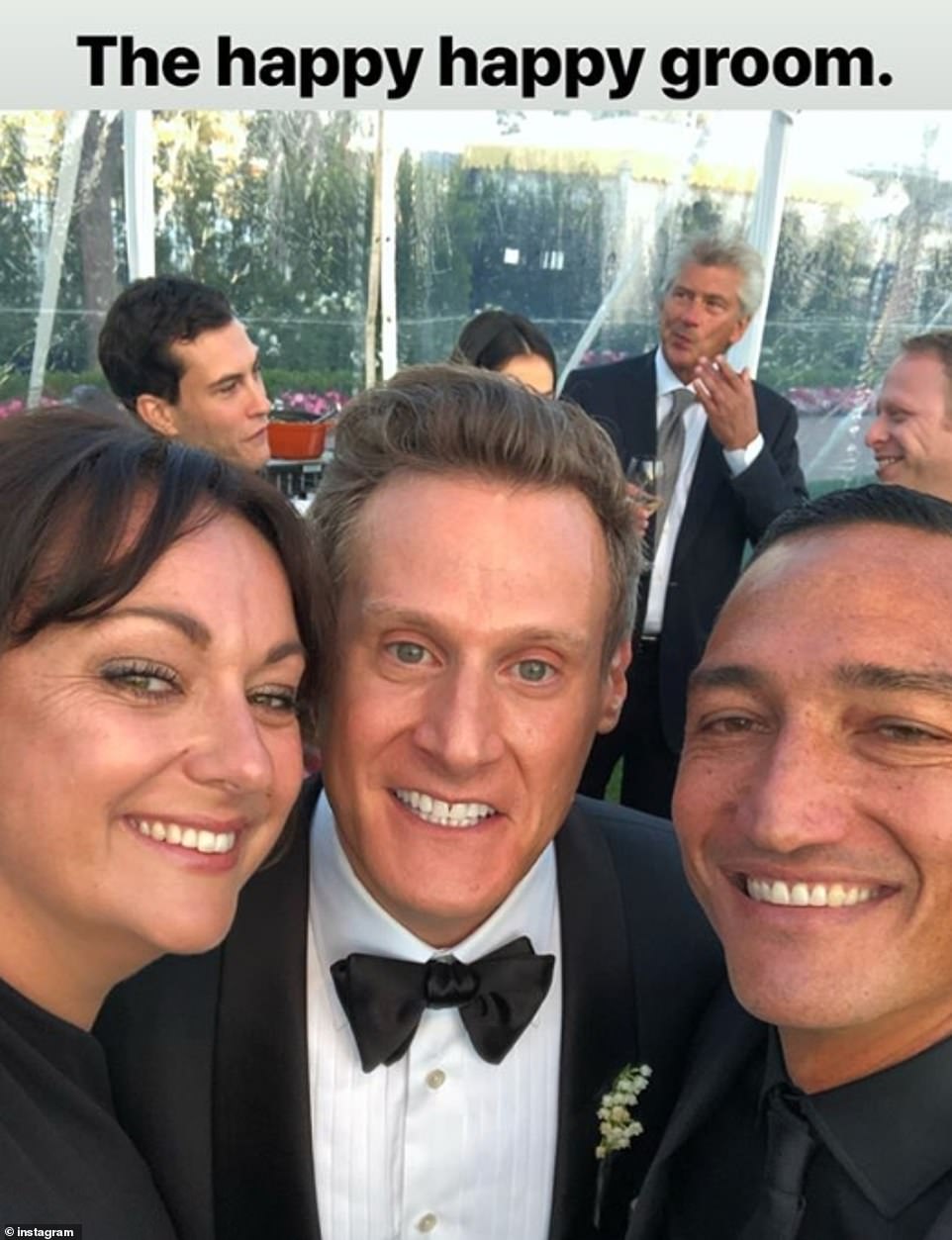 A number of guests posted pictures from the big day online, with one describing Engelson as the ‘happy, happy groom’ 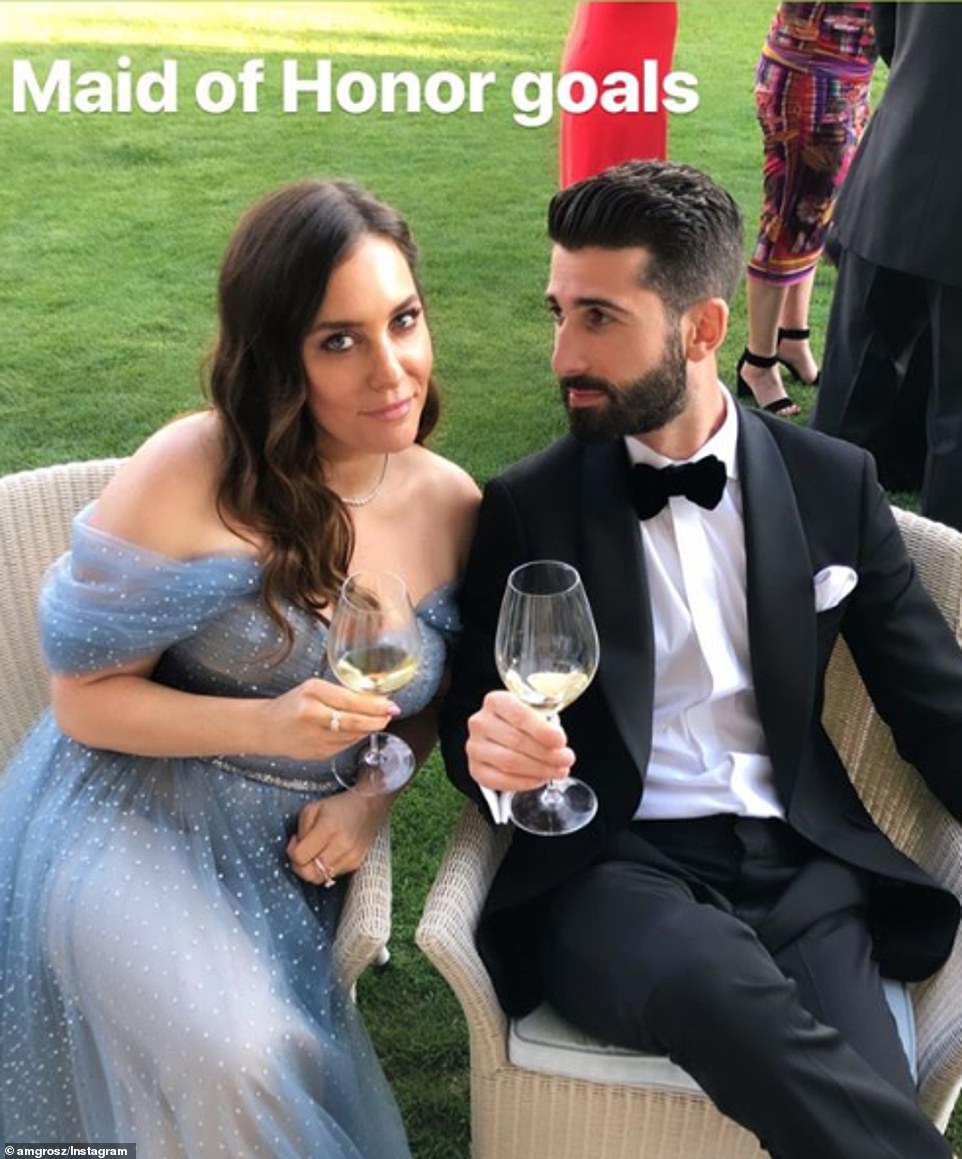 Friends and family gathered for the wedding at the upscale beachfront hotel on Friday night, ahead of Saturday’s ceremony 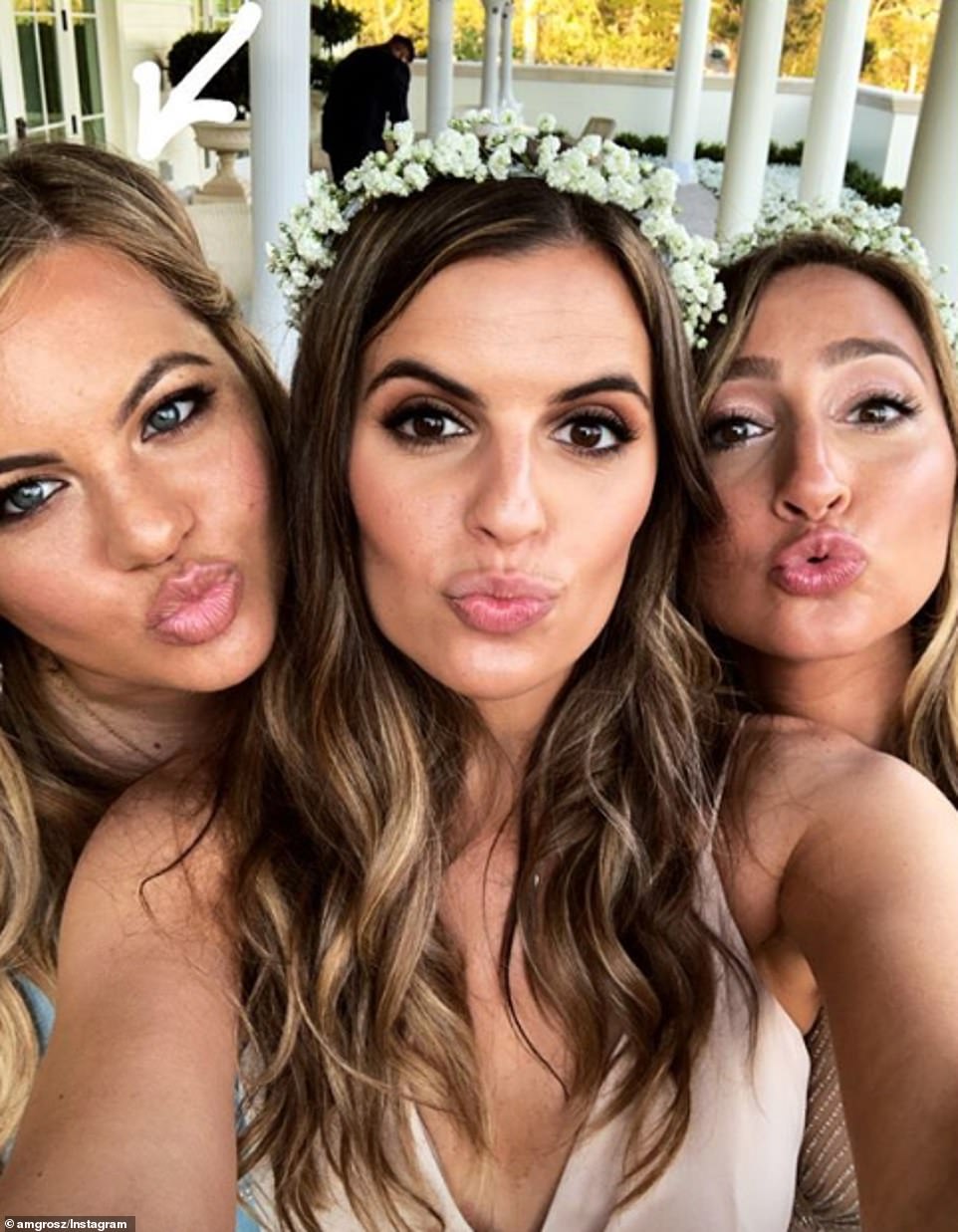 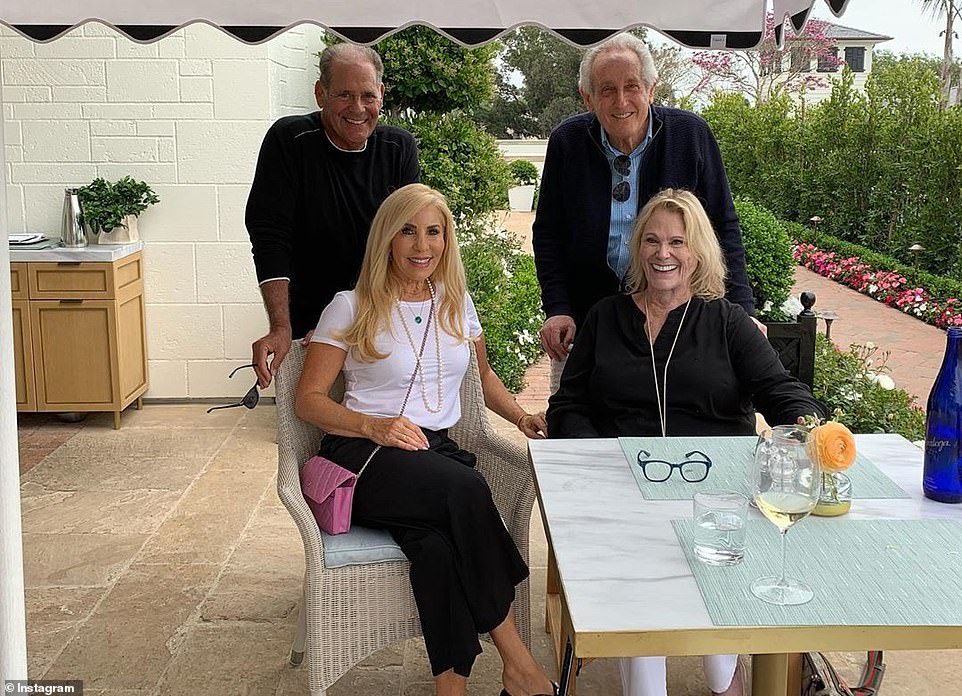 Countrywide was a contributor to that economic collapse as one of the institutions that made risky loans to tens of thousands of Americans.

Kurland cashed out to the tune of $200 million when he left his post as second-in-command, and kept a low profile as the economy collapsed, resulting in the government bailout of many baking behemoths.

He then profited off that bailout by founding  PennyMac Financial Services and PennyMac Mortgage Investment Trust, which made millions off the sub-prime mortgage crisis caused by lenders such as Countrywide.

PennyMac set about purchasing mortgages from the federal government – which were bought with taxpayer money from those bailed-out banks – for less than 40 cents on the dollar.

The company then offered home owners a chance to refinance their properties at a more affordable rate they the one they had been offered just a few years prior by companies like Countrywide.

In 2018, Kurland earned a total compensation of $8.9 million in his role as chairman of the PennyMac Mortgage Investment Trust board.

The couple kicked off the weekend with a rehearsal dinner for all of the guests at the resort, where rooms start at close to $1000 per night for a weekend stay.

It was remarkably similar to the dinner ion Saturday, but held outdoors under a tent.

The wedding cost over $1 million a source familiar with the resort told DailyMail.com, a far steeper price tag than Engelson’s first wedding on a beach in Jamaica. 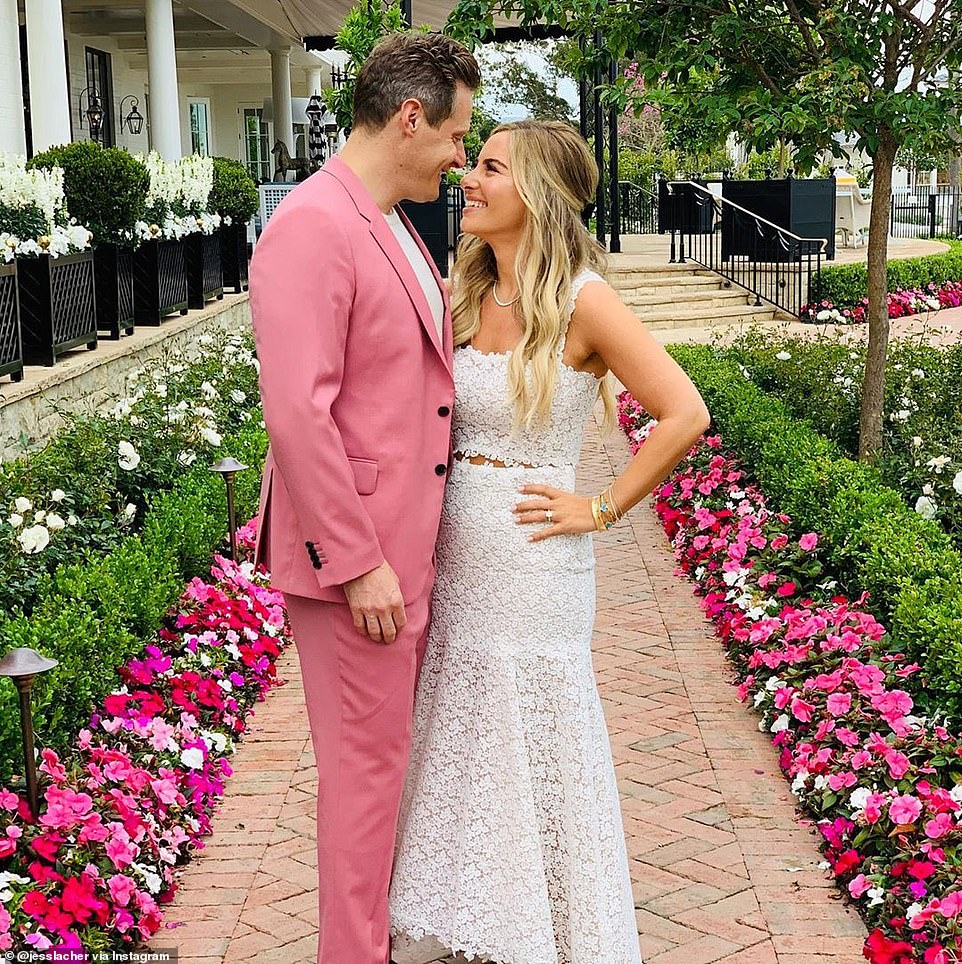 Trevor Engelson and Tracey Kurland are seen above at the rehearsal dinner, wearing white and pastel 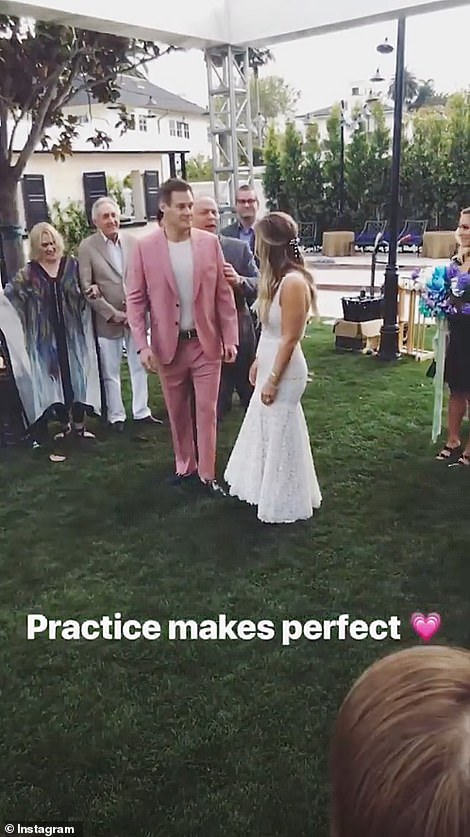 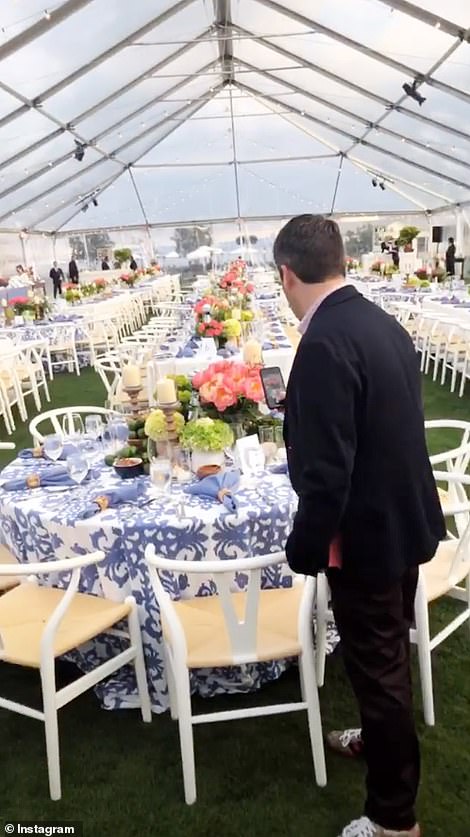 The rehearsal was held at the hotel on Friday night, showing off the tastefully tented space 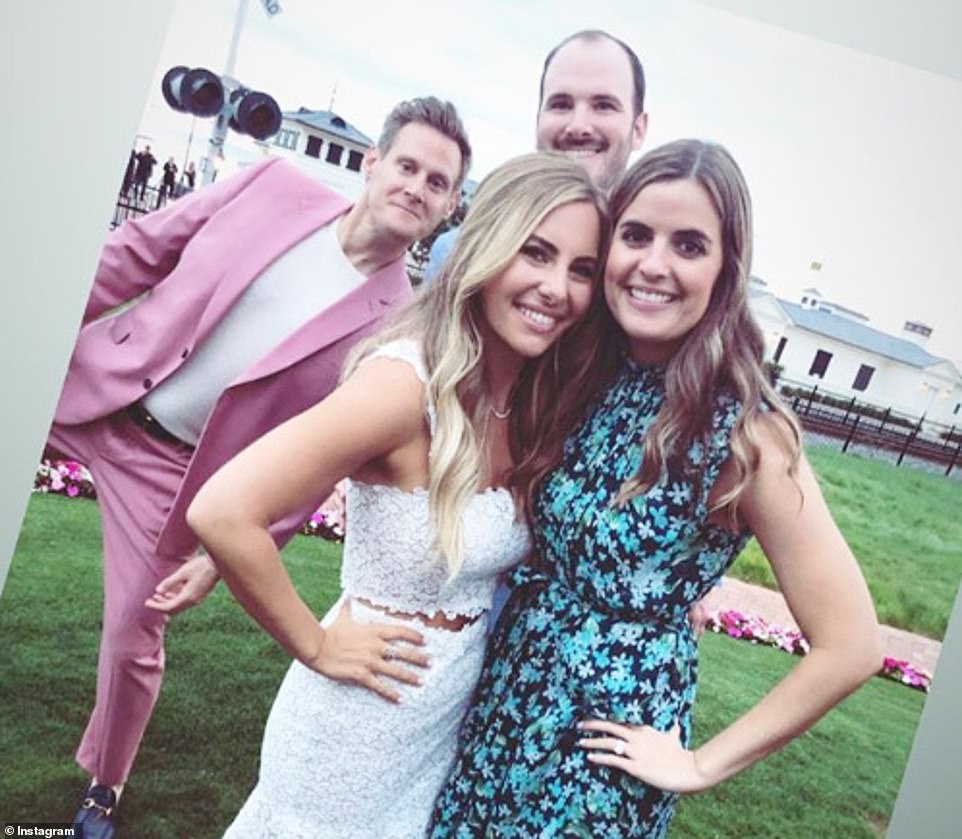 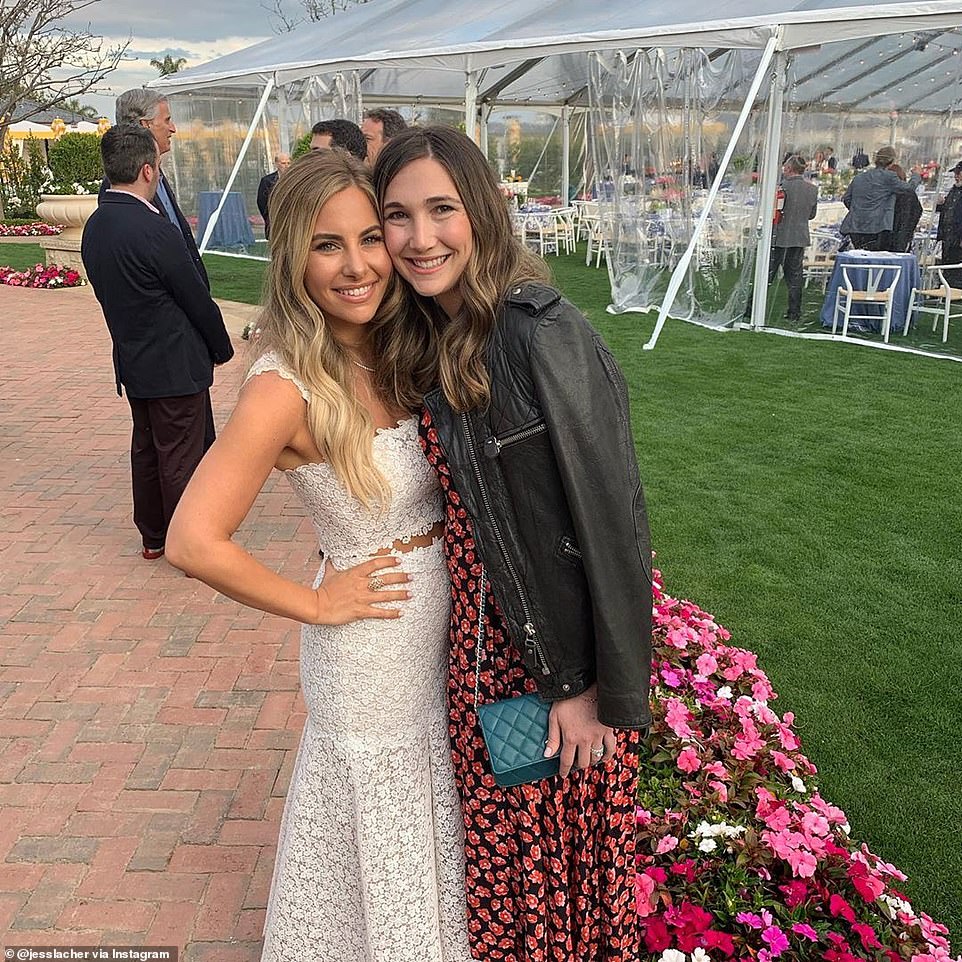 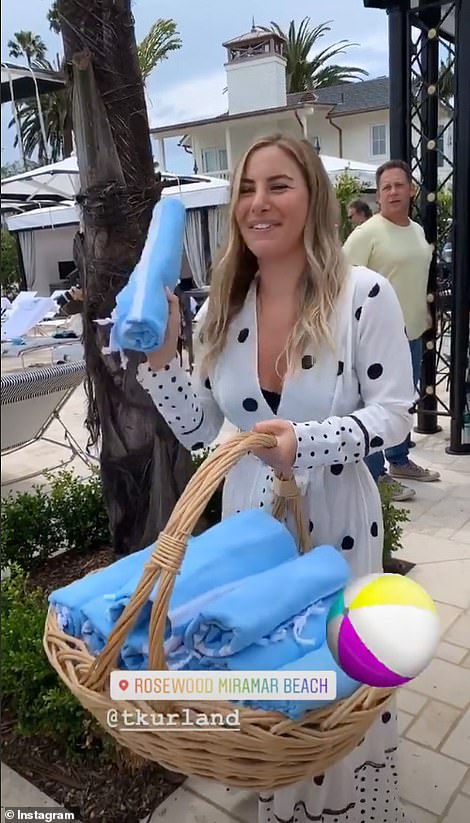 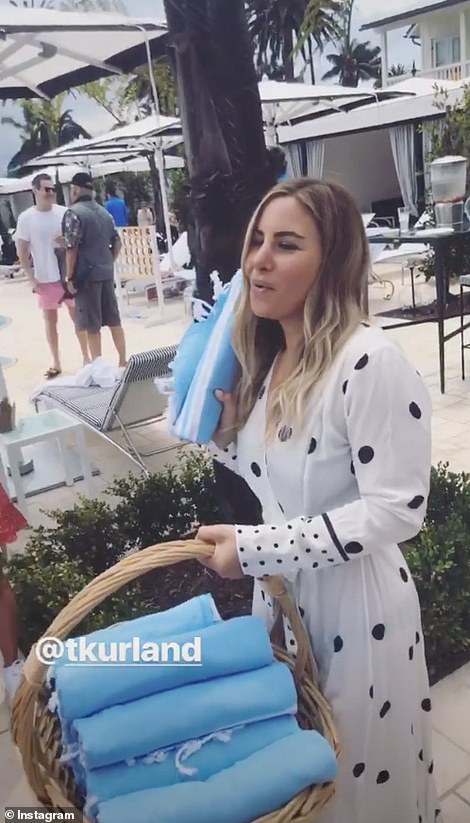 And while it was a refined affair all around, Engelson’s bachelor party just a few months prior was anything but as DailyMailTV reported at the time.

Engelson can be seen being toasted in social media footage from his trip to Miami- and possibly roasted – by a friend who appears to be referring to his ex-wife.

As the group of men lift up their glasses, one of them looks across to Engelson and says: ‘This right here… this right here is to royalty, you know what I’m saying?’

To chuckles from the group and the clinking of glasses, he continues: ‘Royalty won, royalty lost… But regardless baby, we got to keep going!’

As the rest of the group cheers in agreement, they all look in the direction of Engelson, 42, who can be seen smiling and nodding his head as the video turns to him.

The cellphone camera is then turned onto the person shooting the video, Engelson’s close friend Ray Smith, who says ‘L’Chaim!’ – a Hebrew term meaning ‘to life’, traditionally used in Jewish toasts and often at engagements and weddings. 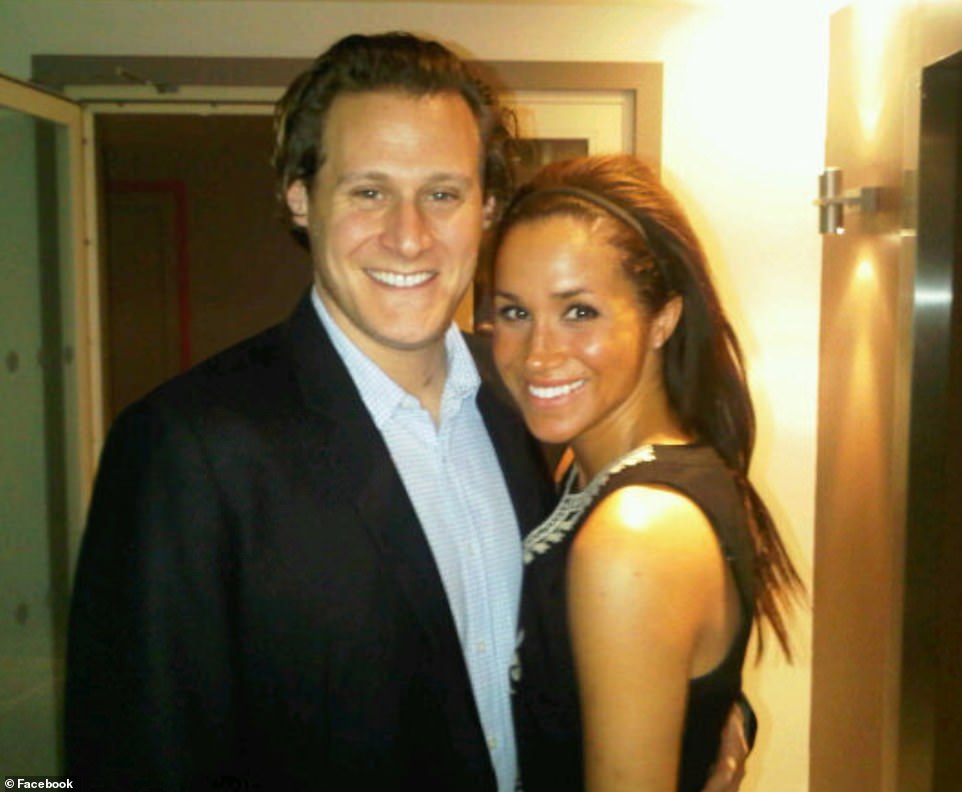 In social media footage obtained by DailyMailTV, Engelson can be seen laughing along with his friend’s toast that referred to his ex-wife Meghan Markle (pictured together in 2010) 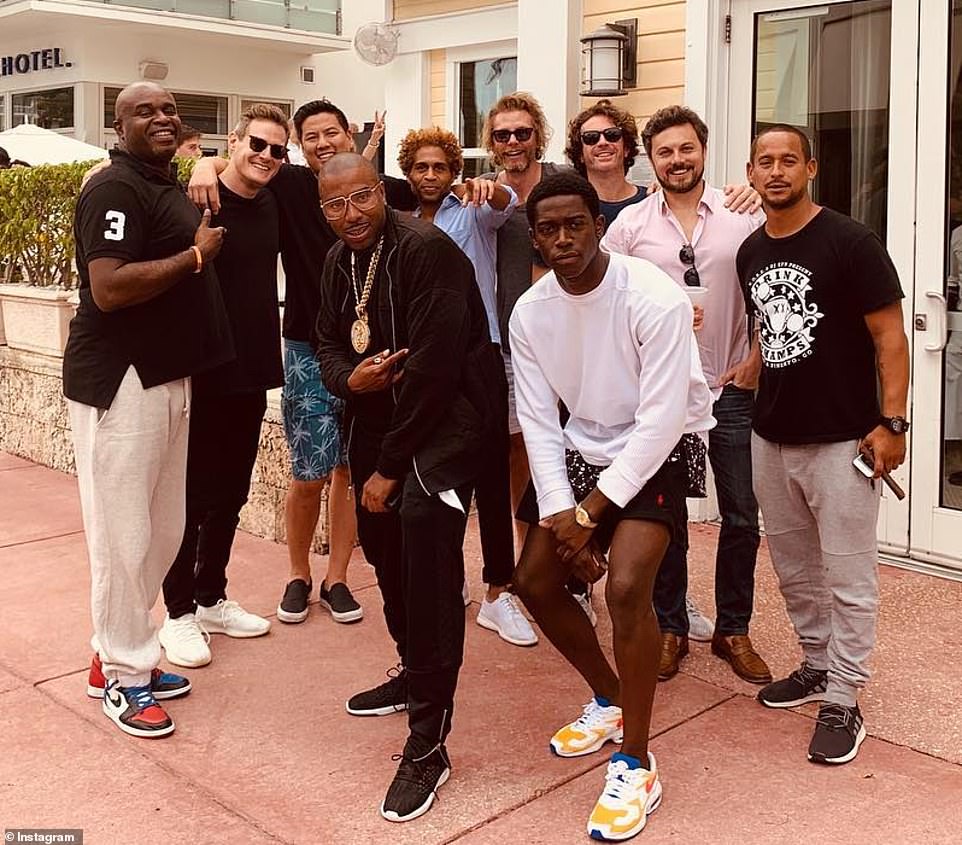 According to staff at the restaurant, Prime 112, the group had a long boozy lunch. ‘They were very lively,’ a source said. ‘They were here for a long time, had quite a bit to drink and were having a great time’ 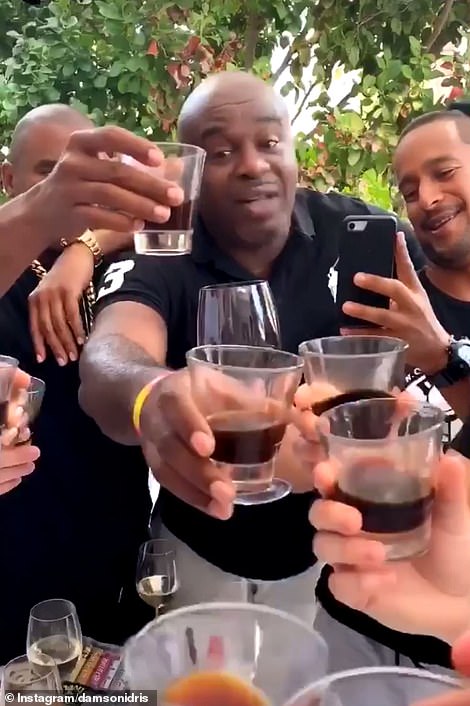 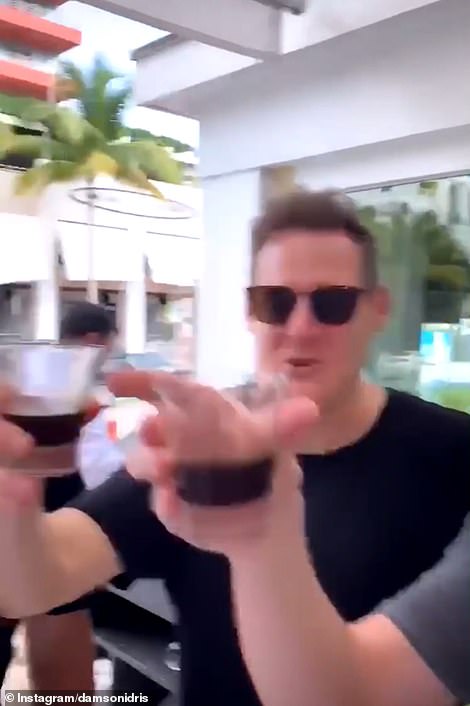 Meghan Markle’s ex-husband Trevor Engelson celebrated his bachelor party with a group of friends in Miami Beach on March 17. During a toast, a friend poked fun at his royal ex-wife Meghan Markle, saying: ‘Royalty won, royalty lost… But regardless baby, we got to keep going!’

According to staff at the restaurant, celebrity favorite Prime 112, the group, which also included US rapper Noreaga, had a long boozy lunch on Sunday March 17.

‘They were very lively,’ the source said. ‘They were here for a long time, had quite a bit to drink and were having a great time.’

The video was posted on the Instagram account of British actor Damson Idris, who stars in the US television show Snowfall, which Meghan’s ex produces.

In another video taken at the restaurant, Engelson’s friend Noreaga also gives an impromptu speech in which he looks at Engelson and says there’s no place he’d rather be than ‘with you celebrating brother’.

He adds: ‘You’re a great guy and you deserve it man, I love you…sorry to be emotional.’

The friend who had given the earlier speech then chimes in and jokes: ‘If it wasn’t for Trev I wouldn’t believe that I could marry a future princess, so now I gotta…what princess is available right now, I’m coming for you girl.’

The group cheers and someone shouts out ‘Wakanda’, which is the home of the royal family in the Black Panther movie.

Engelson himself posted a group photo from the weekend, shot outside the same restaurant, with the message, ‘No caption necessary’.

And Engelson’s wife-to-be Tracey Kurland, who went on her own bachelorette party to Hawaii just four weeks ago, contributed with a joke.

In the post’s comment section she wrote:’…guess it’s time to get married now!’

Producer friend Dan Farah posted the same snap on his Instagram page, alongside #sundaysunday and #miami, and the post was liked by veteran Hollywood actor Tony Danza.

As part of the trip, which appears to have spanned a weekend, the group also went on a yacht on the blue waters around Miami Beach.

Damson posted a photo alongside Engelson on the water, both smiling widely in the Florida sunshine.

Among the other men on the trip were fellow producer Dan Farah and close friend Douglas Banker.

The couple also celebrated their engagement with a bash in October.