Meghan Markle surprised British Vogue’s Edward Enninful with an impromptu celebration to mark their collaboration on the September edition in an unseen video.

The Duchess of Sussex, 38, handed the fashion designer a sparkly party hat and horns as a thank you for agreeing to let her be the first ever guest editor of the magazine.

In the two-and-a-half minute clip shared to the Sussex Royal Instagram page this evening, the duo call up the women Meghan selected to be on her front cover.

Enninful also praises the duchess for her ‘editor’s eye’, claiming: ‘I’ve never seen anything like it. You were so thorough from beginning to end.’

The Duchess of Sussex, 38, handed the fashion designer a sparkly party hat and horns as a thank you for agreeing to let her be the first ever guest editor of the magazine

The video, which was filmed in London in August last year, begins with Enninful revealing he received a text from Meghan asking him to help her with her Smart Works project.

He recalled being ‘so excited’ as he walked into Kensington Palace, to which Meghan replied: ‘Oh my gosh.’

Enninful said: ‘I was like, “Lovely to meet you, Duchess.” And you were like… “Call me Meghan!”

After he agreed to work with her on her charity project, Meghan told how she decided to see if she could ‘push it just a little bit more’ and ask him if he was willing to let her guest edit an edition of Vogue. 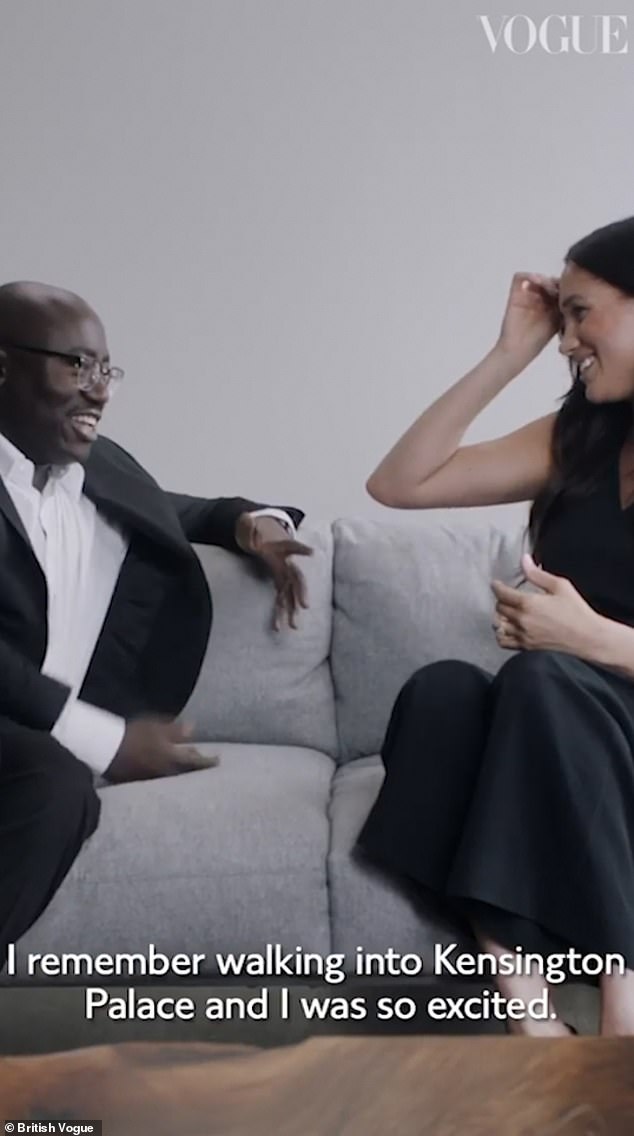 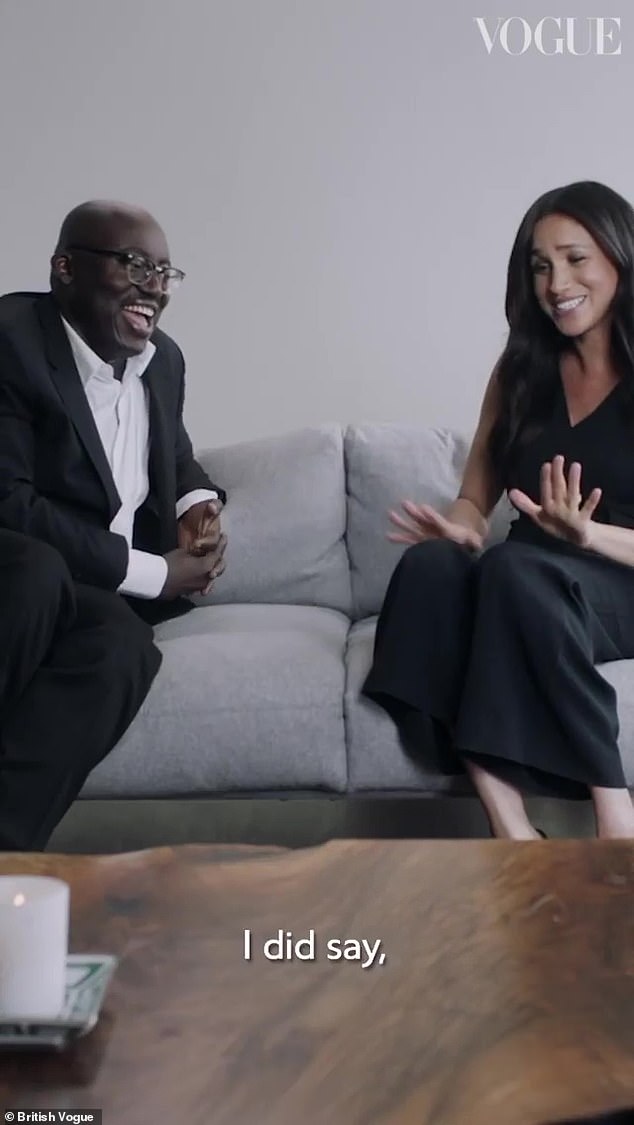 Enninful said: ‘I was like, “Lovely to meet you, Duchess.” And you were like… “Call me Meghan!”

Enninful praised the duchess for her attention to detail, gushing: ‘You have an editor’s eye, I’ve never seen anything like it. You were so thorough from beginning to end.’

Meghan admitted that she left the fashion element ‘to the professionals’, adding: ‘I did say, “Can you do Commonwealth fashion?” “Can you do sustainability?” “Can we make sure the point of view is really in the right ethos?” And then I’ll leave it to the experts.’

Enninful replied: ‘You wanted to focus on women who are changing the world, women who are doing incredible things, which really is in line with what we do at British Vogue.’ 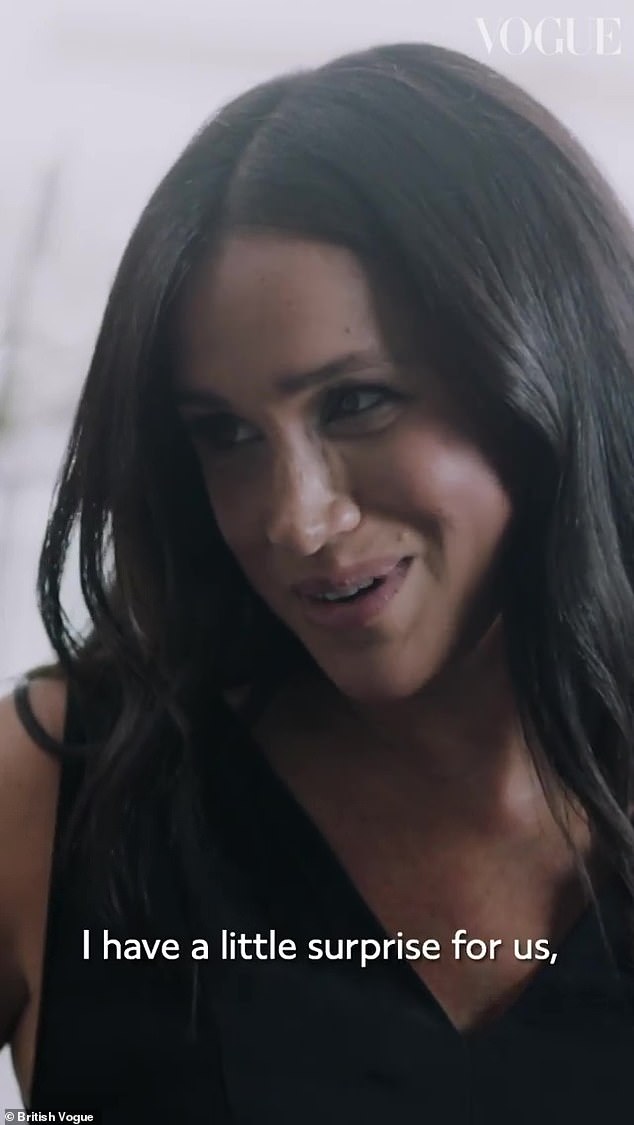 The duchess told how one of the elements of the September edition of British Vogue, which sold out in 10 days and was the biggest selling issue of the past decade, was its eye-catching mirror front cover.

‘Having the mirror – anyone, no matter who they are, picking up this issue, should be able to see themself in it, and that’s what I feel really proud that we’ve accomplished,’ Meghan said.

At that point, the former actress revealed she had a ‘surprise’ for Enninful, to congratulate him for bringing her vision to life.

She then hands him a bright red glittering had before placing a silver mini top hat on her own head.

The duo then blow their party horns before collapsing into giggles.

Meghan selected 15 ‘trailblazers’ and ‘changemakers’ to appear on her front cover.

The line-up of women she admires included celebrities, politicians and activists known for championing issues such as diversity, body positivity, transgender rights and climate change. 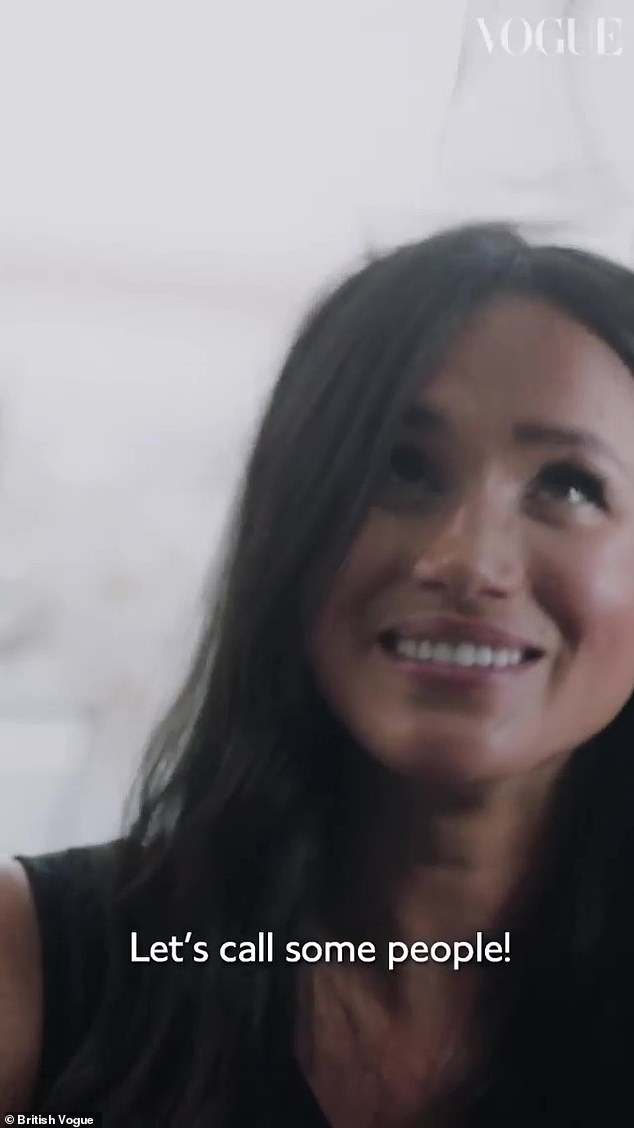 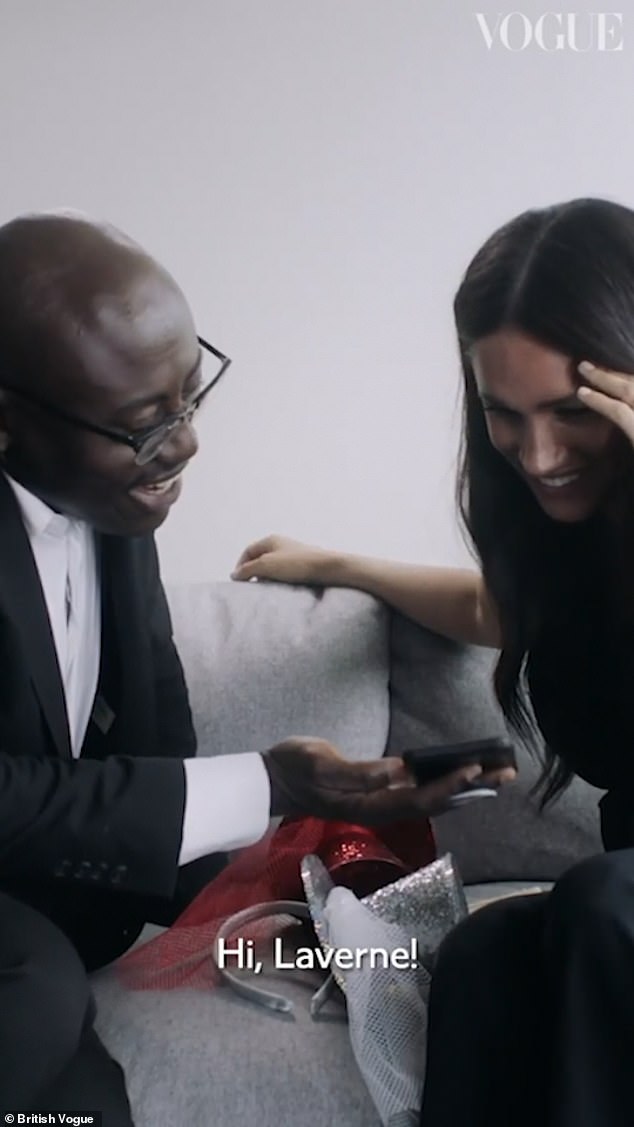 In the video, the duo call up several women – with Meghan admitting her first choice was Yara Shahidi.

‘I kid you not the very first name that I said I wanted on the cover was you,’ she told the 19-year-old US actor and model who launched Eighteenx18, a movement to encourage voter turnout.

Meghan told Adut: ‘Just know that we are so so proud to have you on the cover.’ 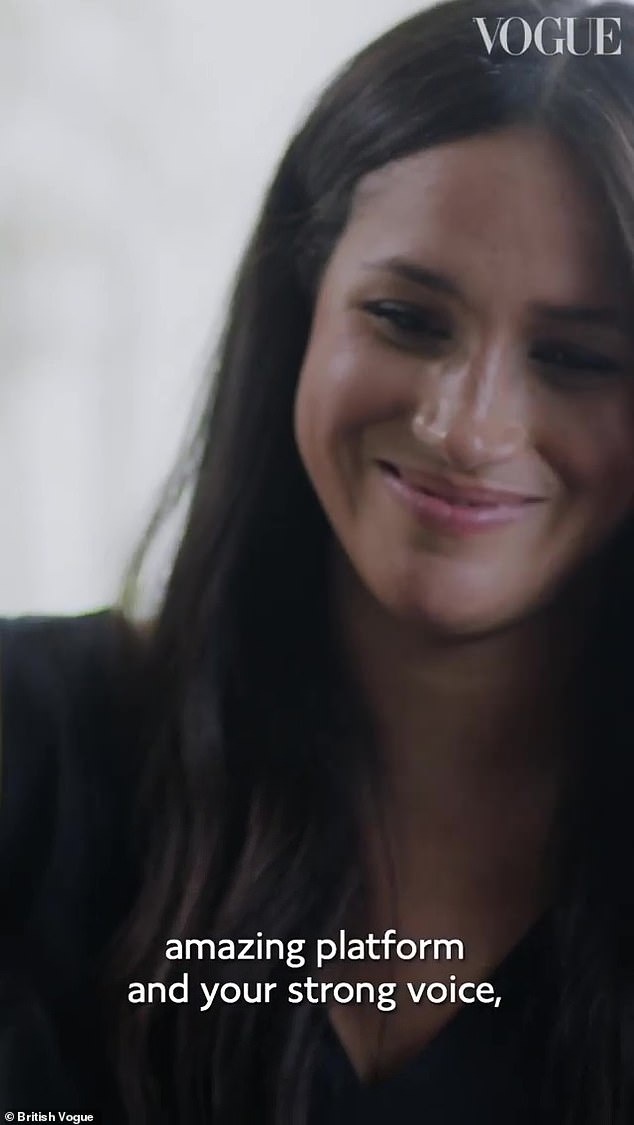 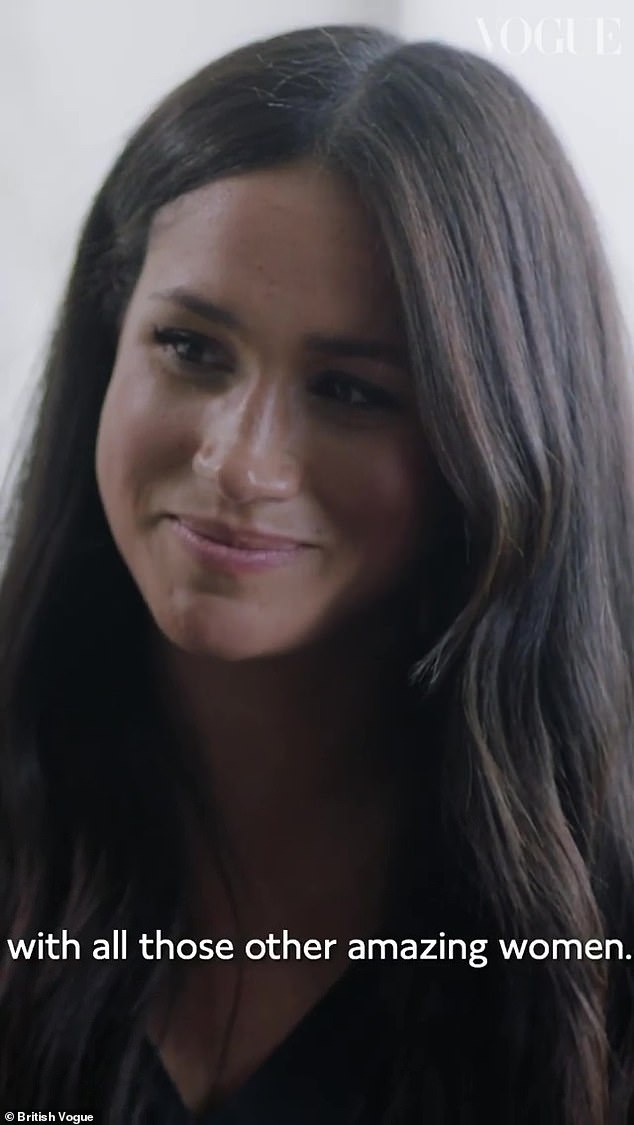 Meanwhile Jane Fonda had some kind words for the duchess, exclaiming: ‘Meghan I’m so proud of you for using your amazing platform and your storng voice, and I’m so honoured to be a part of it with those other amazing women, thank you so much for including me.’

Earlier this year Meghan and Prince Harry, 35, quit as senior members of the Royal Family and are currently residing in Canada, planning to split their time between British and the US.

Meghan’s role as guest editor represents one of the most radical moves in Vogue’s 100-year history, with the magazine saying it considers the new September issue to be its most important edition of it’s year.

The duchess, a former actress and avowed feminist, had initially been asked to appear on the cover herself. But Vogue’s editor-in-chief Edward Enninful said Meghan refused as she thought it would appear too ‘boastful’.

In a statement, Meghan said: ‘Through this lens I hope you’ll feel the strength of the collective in the diverse selection of women chosen for the cover as well as the team of support I called upon within the issue to help bring this to light.

‘I hope readers feel as inspired as I do, by the forces for change they’ll find within these pages.’

Instead the duchess wanted to focus on the ‘women she admires’ from the ‘frontline of fashion, film, tech and wellness’.

Meghan also selected content for the issue which, according to Mr Enninful, shows she is willing to wade into issues of ‘female empowerment, mental health, race or privilege’.

Enninful, who has been the editor-in-chief of the magazine for the last two years, told  in July how he has always had ‘profound respect’ for the Duchess – before discussing why he thinks she is the ultimate force for change.

Speaking on a personal note, he wrote: ‘I can’t overstate how much it meant to me to see HRH The Duke of Sussex marry this brilliant, bi-racial, American powerhouse.’

‘I simply never imagined that, in my lifetime, someone of my colour would – or could – enter the highest echelons of our Royal Family.’

While many royal watchers at the time thought the decision was too  political for a then member of the Royal Family, who are supposed to stay politically neutral, Meghan revealed it was her who reached out to Edward.

Meghan, who at the time was five months’ pregnant with son Archie, said: ‘So I asked the question. Actually, I typed and deleted the question several times until I built up the courage to ask the question in question: “Instead of doing the cover, would you be open to me guest editing your September issue?”‘

Enninful, replied that he would ‘love’ for Meghan to be his guest editor, she said.