Meghan’s mockney accent! Duchess of Sussex puts on a fake British twang to greet Jameela Jamil with an ‘ello on Archetypes podcast

Meghan Markle showed off her ability to put on a British accent when she greeted actress Jameela Jamil with a hearty ‘ello!

The Duchess of Sussex welcomed her friend, Hulk actress Jameela on to the show with her best British accent.

After opening the ninth episode of Archetypes, she welcomed ‘my friend Jameela Jamil’.

Jameela Jamil, 36, is a UK actress and influencer with her foot in the game of online activism, she regularly speaks out on women’s issues including online critics and body image

The actress greeted Meghan by saying: ‘You alright babe? Hello’.

And Meghan replied ‘ello’, with what appears to be a mockney accent, before speaking normally again.

One listener tweeted: ‘Is Meghan trying to do a British accent again?’

Jamil however, didn’t seem to find the gesture insulting as the pair touched on female activism and the 36-year-old hailed Meghan as ‘a sobering voice’ and offering ‘unwavering support’ in the wake of online criticism.

The latest podcast had a positive impact on fans, calling it ‘food for the soul’ and praising the subject matter.

One said: ‘I love Jameela’s learning curve. As a celebrity you don’t need to have an opinion on every topic. And that’s ok.’

The Tweeter who calls themselves a ‘royalist’ in their online name, said that the use of the accent was ‘bullying’ instead of harmless fun between friends

Alongside the actress and influencer The Duchess of Sussex spoke with the American-Iranian star of X-Men and 24, Shohreh Aghdashloo, 70, for an episode called The Audacity of the Activist released today.

The Duchess of Sussex told the latest episode of her $30million Archetypes podcast for Spotify that her confidante is the reason why she didn’t stop campaigning for ‘women and girls’ after joining the Royal Family.

Meghan and her guests discussed why activism and ‘big ideas’ from women are ‘often deemed audacious’ and used against them to make them ‘feel small’ – at one point the duchess claims women get ‘no credit and all the blame’.

She then thanked her friend Jameela for ‘fighting back’ for her after the actress claimed the royal has been ‘demonised’ since she started her relationship with Harry. 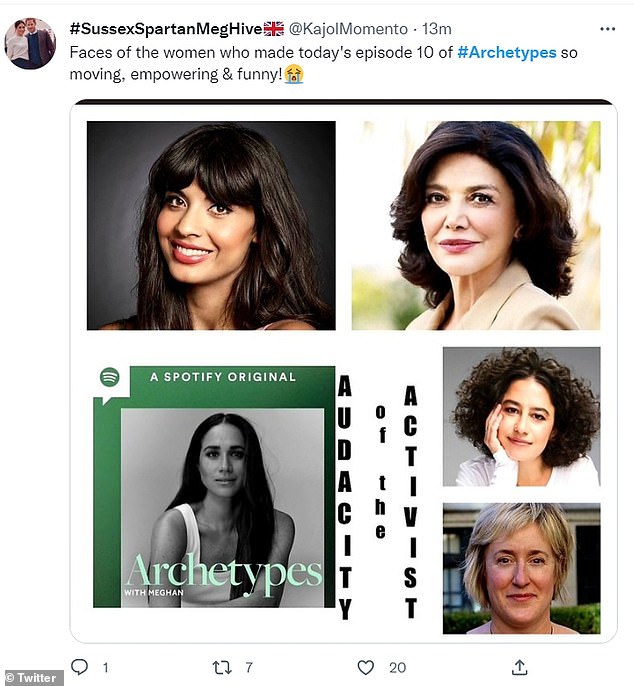 Miss Jamil, 36, revealed the former Suits star privately reaches out to women ‘in our most lonely and desperate moments’.

Jameela tells her: ‘It’s just it’s an unfathomable amount of s*** that you take Meghan. I can’t believe it. And I fought back on your behalf of years before I’d ever met you because I was so outraged by the twisting of this, very normal, very kind, very civilized woman. That demonization just shows how afraid they are of you’.

She added: ‘I’m so sorry you’ve had to withstand it. I feel faith that tides are changing because so many of us are fighting back’, to which Meghan replied: ‘Well thank you for fighting back’.

Jameela describes feeling suicidal in the wake of criticism of her words or actions before revealing that Meghan has contacted her and other women in the public eye.

She said: ‘I also just want to thank you, in a way that you know I probably didn’t get to at the time, but during some of my hardest moments where I’m being the most maligned and harmed by the media, and also by the public.

‘You have been such a sobering voice of unwavering support to me. And people don’t know that you frequently reach out to women who are having a very very hard time.