The Duchess of Sussex has deliberately kept her royal tour wardrobe casual to ensure attention remains on the ‘issues’ she and Prince Harry are trying to highlight, rather than her looks, an expert has claimed.

Meghan, 38, dressed down for her engagements in South Africa this morning, pairing black denim jeans with a favourite J.Crew linen blouse and a jean jacket from US brand Madewell that she has owned for at least three years.

She then donned a recycled stripey maxi dress that she previously wore on her and Prince Harry’s tour of Australia in October 2018 to attend a Reception for Young People at the Residence of the British High Commissioner in Cape Town – after re-wearing a blue shirtdress yesterday that was spotted in during her visit to Tonga.

The Duchess also removed her glittering £250,000 engagement ring for the second day running, with a source saying it was because she wants to be more ‘low key’ on tour.

The outfits greatly contrast with those worn by Meghan on the royal tour of Australia, New Zealand, Tonga and Fiji last autumn, which had more new, standout pieces, even when casual. 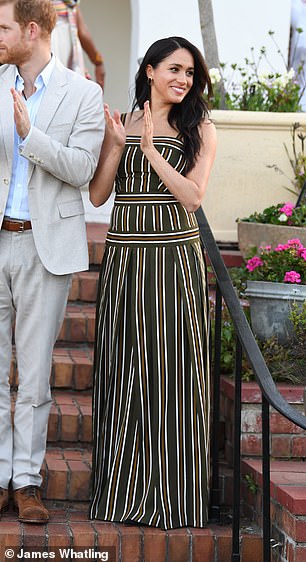 Meghan Markle recycled a stripey dress from her and Prince Harry’s Australia tour in 2018 to attend a Reception for Young People at the Residence of the British High Commissioner in Cape Town, South Africa 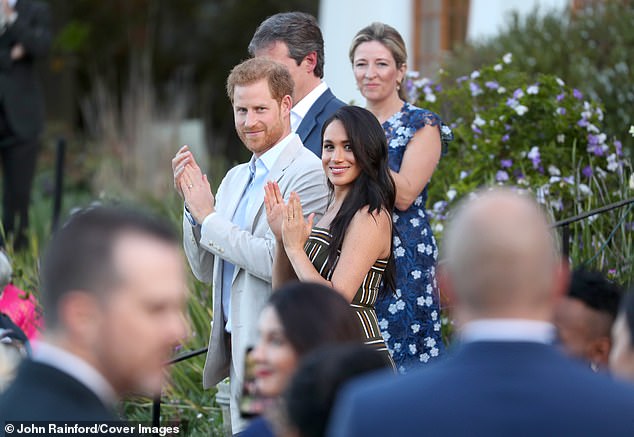 The duchess looked radiant in the square-neck gown, with her long dark locks let loose around her shoulders 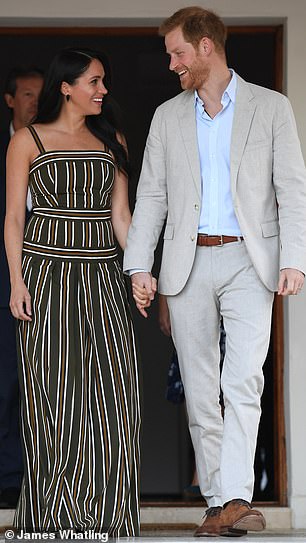 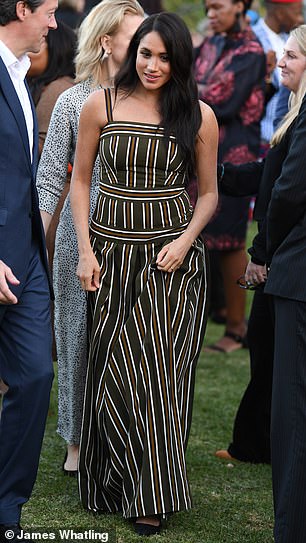 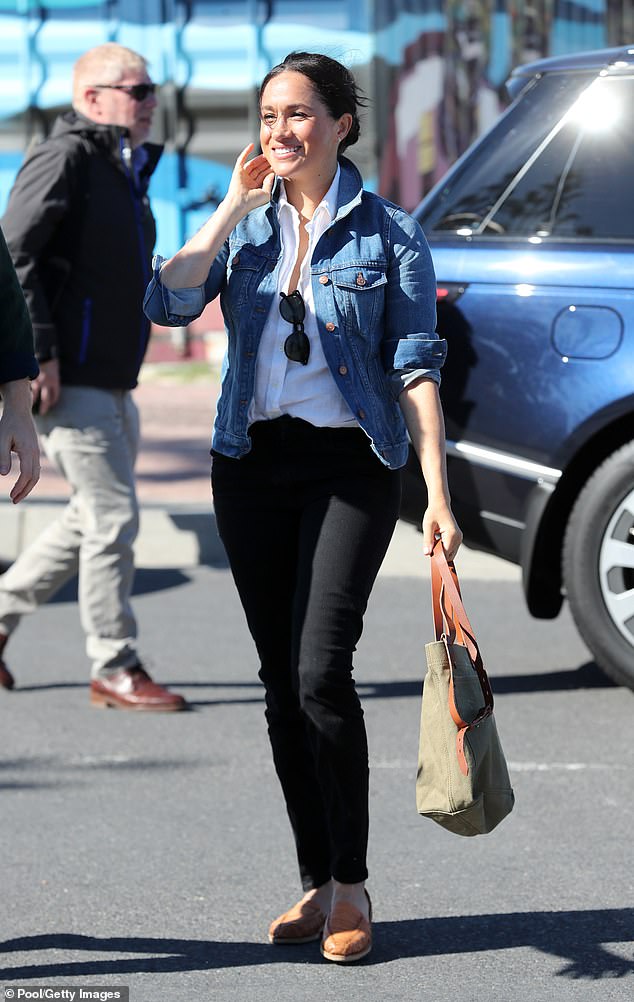 Meghan, 38, wore a classic combination of a shirt, black jeans and favourite denim jacket as she joined Prince Harry at a surf camp on Monwabisi Beach, on the outskirts of Cape Town 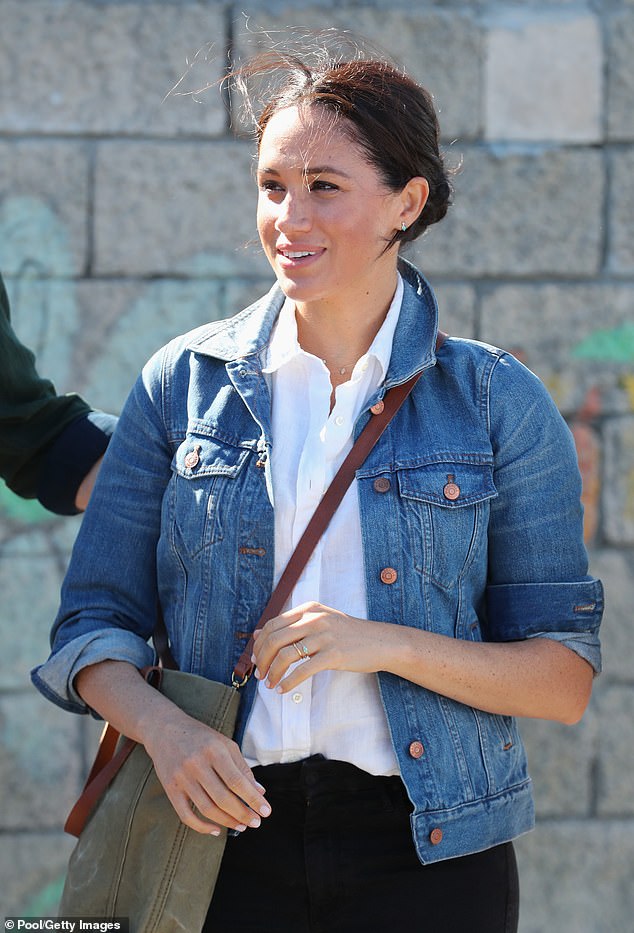 The Duchess of Sussex swept her hair back into a relaxed low bun and plumped for a natural make-up look. She kept her jewellery simple, choosing a simple turquoise ring and earrings 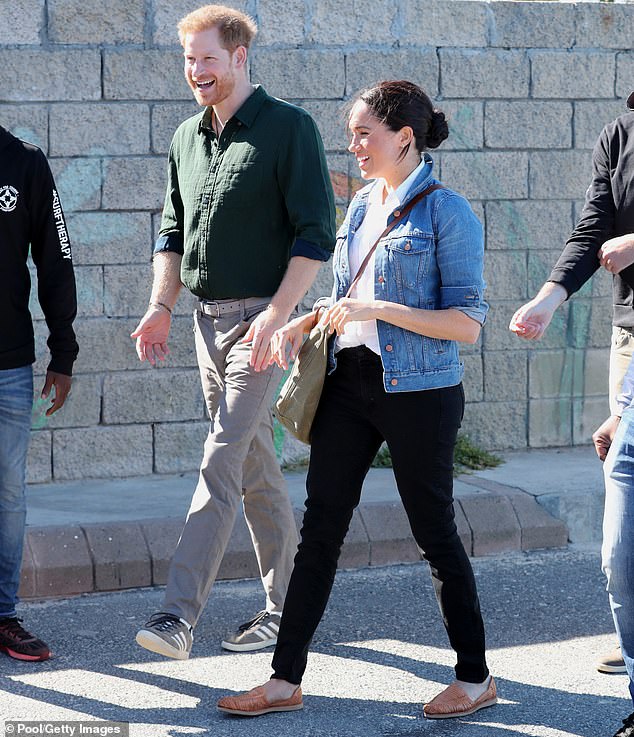 It remains to be seen whether the rest of the tour wardrobe will be similarly low key, but the fact that there is no state dinner means it will at least lack the showstopping formal glamour of her last international visit.

Speaking to FEMAIL, etiquette expert William Hanson explained Meghan has likely made a deliberate decision to forgo flashy outfits in favour of more understated looks in order to encourage a greater focus on the work she is carrying out.

He said: ‘It is understandable that Their Royal Highnesses want the press attention to focus on the issues and causes that they are there to champion rather than the more superficial aspects of royal life – as often happens on royal tours.

‘There is also a larger amount of poverty in South Africa and so to arrive wearing expensive designers and high fashion may be somewhat jarring.’

It comes amid reports that Harry and Meghan are eager for the 10-day visit to be seen strictly as a working tour, with one insider telling Vanity Fair: ‘This isn’t a holiday and they don’t want it to look like one.’

This is understood to be of particular importance given the recent bad publicity surrounding the couple. 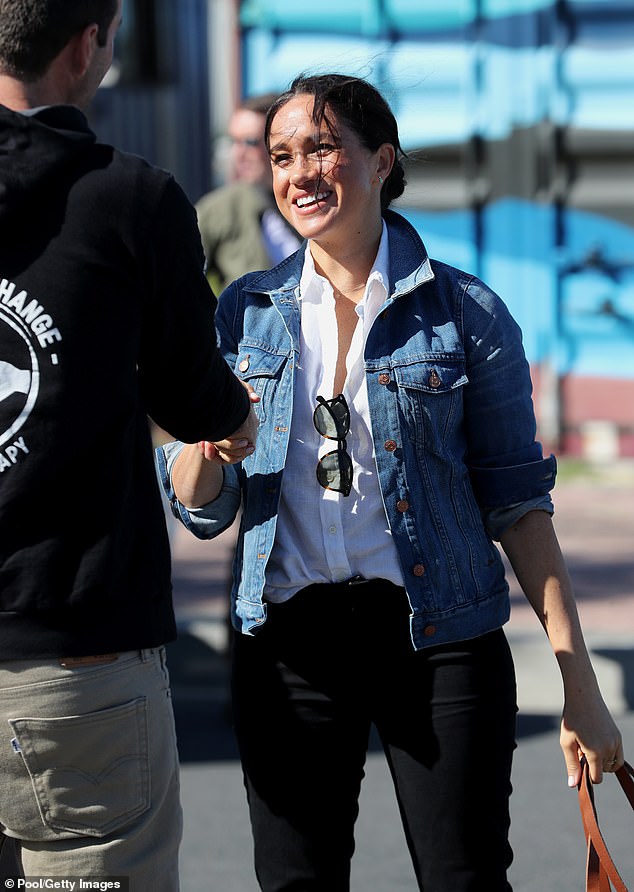 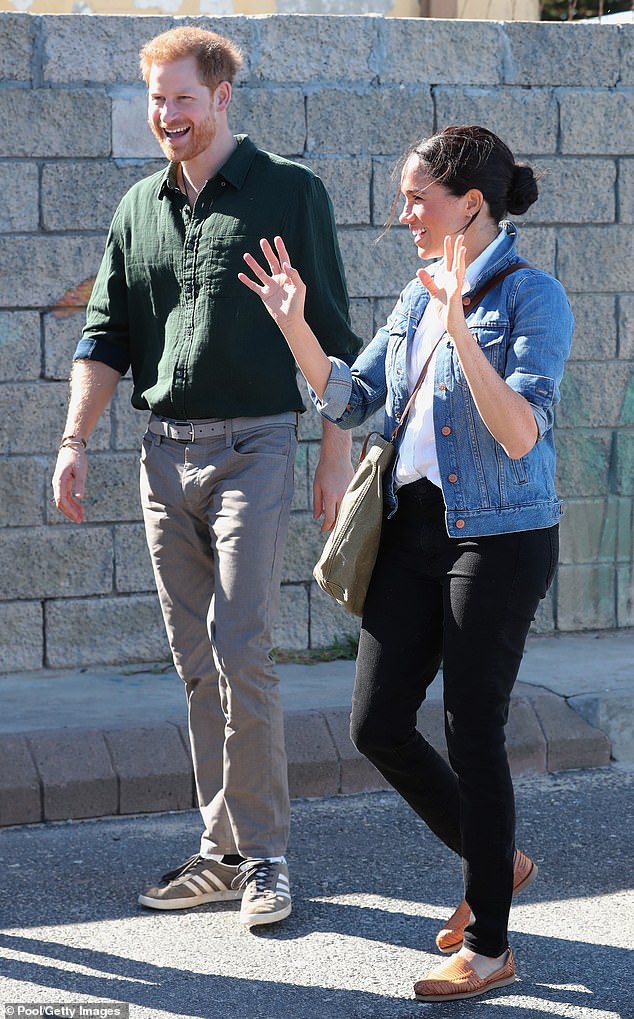 The key to the no make-up, make-up look? Glowing, even skin. Meet NYX Professional Makeup Bare With Me Tinted Skin Veil. It’s hydrating (aloe infused) and offers super light coverage. For a dewier finish, apply it with a dampened makeup sponge and use concealer on any areas that need extra coverage.Show more

*PRICES MAY NOT BE AS ADVERTISED

‘Meghan could be feeling more at ease with her own style now that she is a Mum and is fully embedded within the Royal Family,’ Susie said.

Shoes: The Duchess wore the £156 Brother Vellies woven flats that she first wore at the polo this summer.

Earrings and ring: Meghan sported the Jennifer Meyer turquoise and diamond set on the first day of the royal tour yesterday.

For her first outing this morning Meghan, 38, wore a £78 linen shirt from J.Crew that she previously wore in June 2017.

Wrapping up against the sea breeze, Meghan threw on a £110 jean jacket from favourite US brand Madewell that she was spotted wearing in April 2017.

Showcasing her signature laid back California style, Meghan accessorised the outfit with a practical £62 canvas and leather tote bag, also from Madewell, and a pair of £156 Brother Vellies woven flats that she first wore at the polo this summer.

A pair of black sunglasses hung on her shirt front and Meghan finished the look with delicate £480 turquoise and diamond earrings and a matching £200 ring from US jewellery designer Jennifer Meyer. 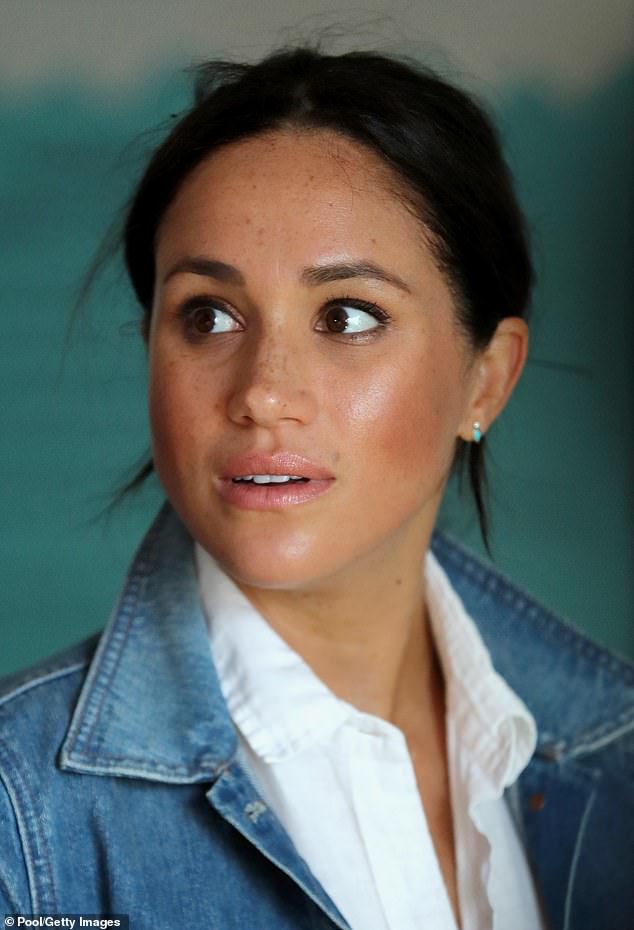 Meghan has so far taken a low-key approach to her royal tour wardrobe, opting for relatively affordable pieces and re-wearing favourites. Pictured, in a denim jacket worn in 2017 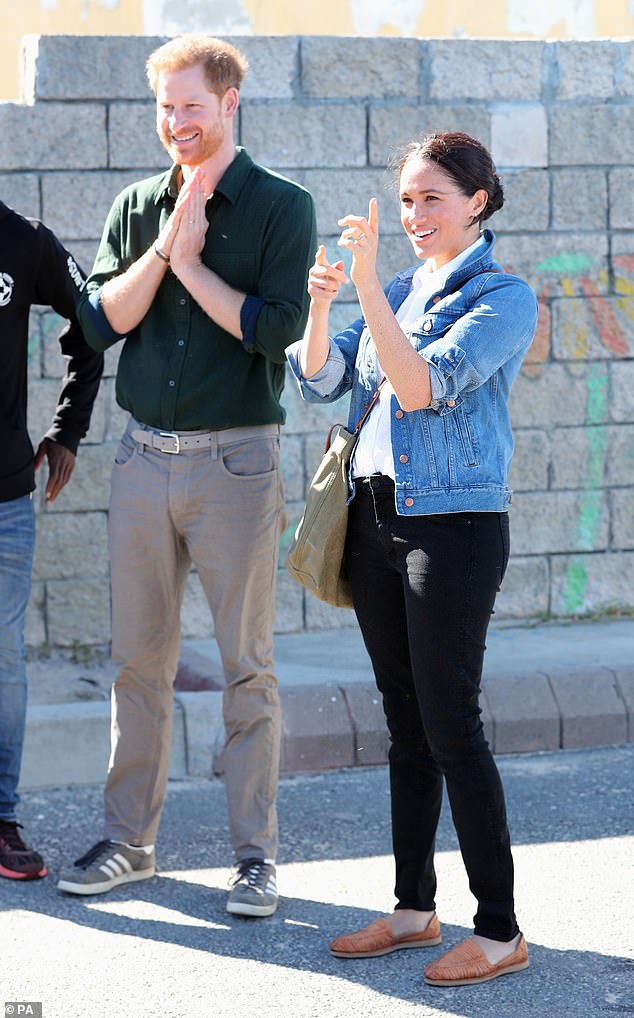 Members of the royal family typically carry small handbags – or none at all – but Meghan opted for a canvas and leather tote from Madewell for the outing in South Africa today, pictured

And while the Duchess is known for her laid back California style, the look today is particularly relaxed – with some experts suggesting it is the first time ever that a member of the royal family has worn a denim jacket on an official engagement.

Her outfits yesterday were similarly understated.

The Duchess wore a £69 dress from a Malawian designer before changing into a £525 Veronica Beard dress that she first wore in Tonga on the royal tour last autumn. She styled both with £80 black lace up wedges that she has sported previously.