Meghan Markle has reportedly returned to New York City to spend some quality time with her girlfriends before her royal baby arrives this spring.

The 37-year-old flew from London to New York City on Friday, February, 15, for a five-day trip filled with shopping, good food, and a baby shower with 15 of her closest pals, according to Harper’s Bazaar.

The visit marks the first time the Duchess of Sussex has been in the Big Apple since she said ‘I do’ to Prince Harry in May 2018, and she hasn’t wasted any time hitting up her favorite hot spots.

Catching up: Meghan Markle (pictured in London last week) is reportedly in New York City visiting friends before the arrival of her royal baby this spring 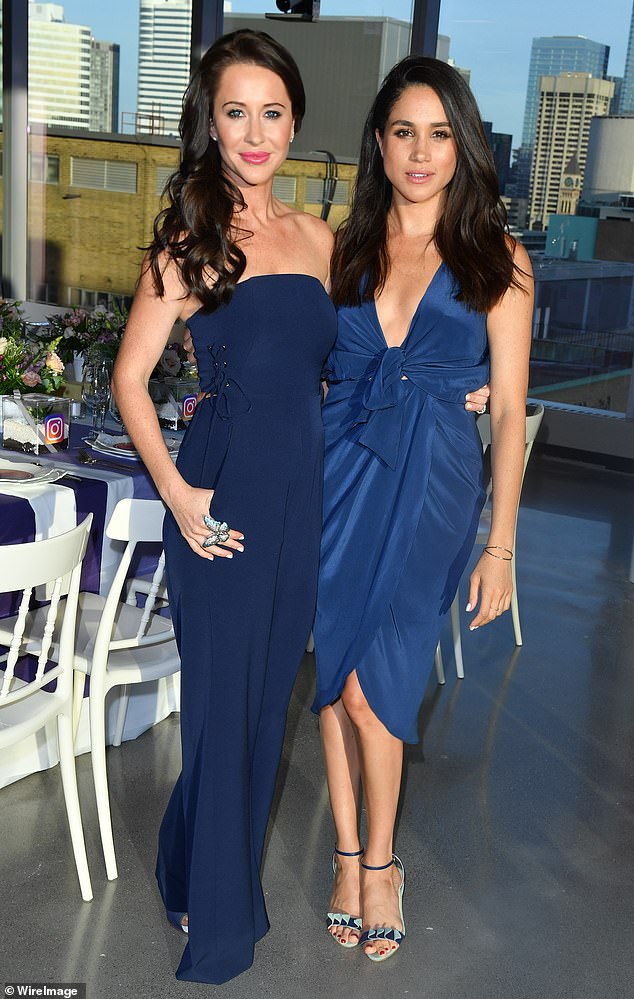 Out and about: The Duchess of Sussex and her close friend Jessica Mulroney (pictured in 2016) enjoyed macarons at Ladurée in SoHo on Saturday

Meghan reportedly joined her close pal and unofficial stylist Jessica Mulroney at Ladurée in SoHo on Saturday to enjoy macarons and tea in one of the location’s private spaces.

Although Jessica is based in Canada, she was in New York filming style segments for Good Morning America after being named the show’s newest fashion contributor in late 2018.

The decision to visit Ladurée may have been Meghan’s as the known foodie once took part in a photo shoot for Tod’s in the ornately decorated French restaurant.

The Duchess also praised the restaurant in an interview with writer Barry Samah. 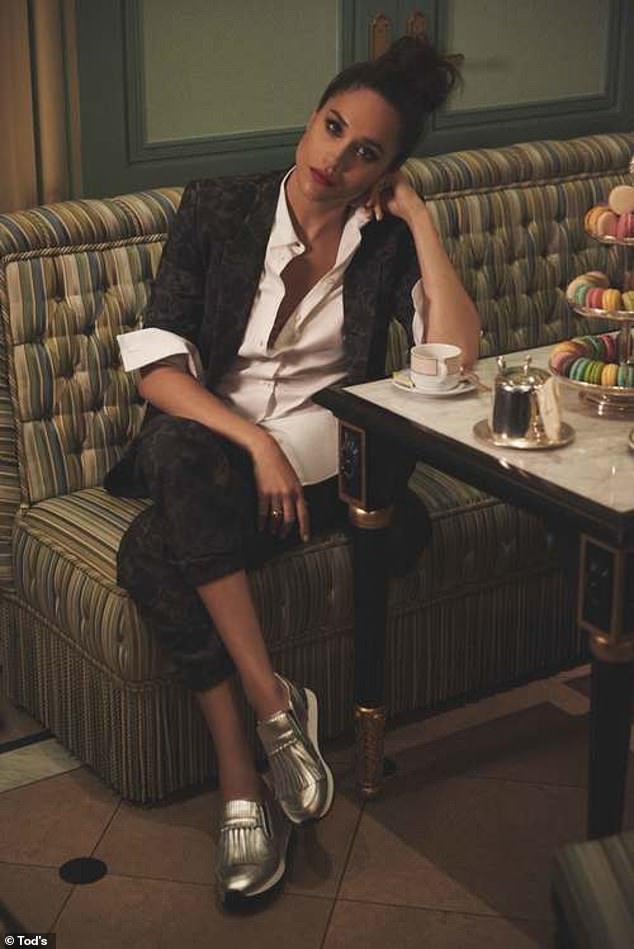 Way back when: Meghan once did a photo shoot for fashion brand Tod’s in the ornate French restaurant 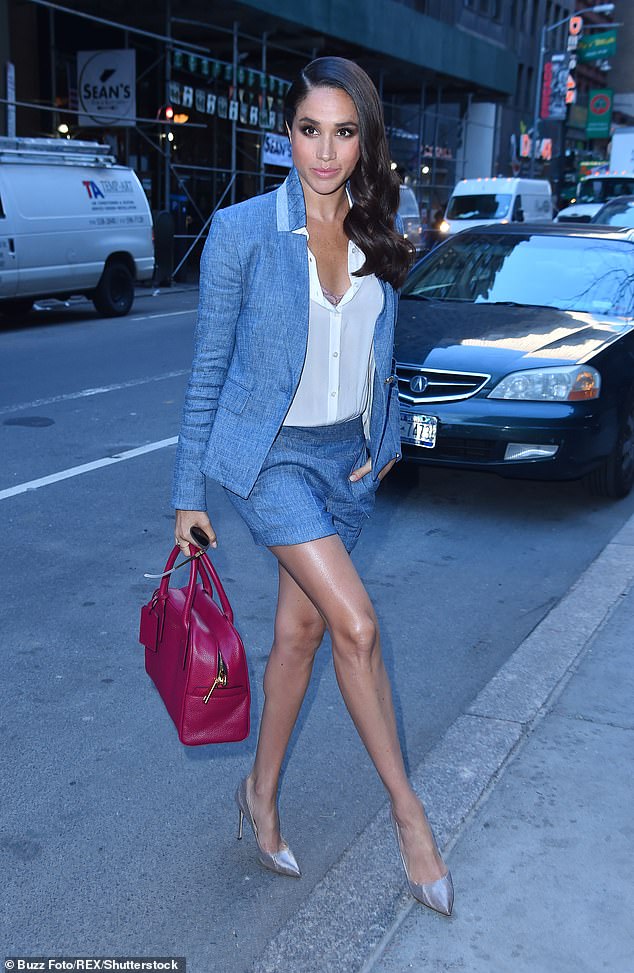 Big Apple fun: A source said the trip is a chance for Meghan to ‘catch up with friends and spent time in a city she loves.’ The former actress is pictured in New York City in 2016 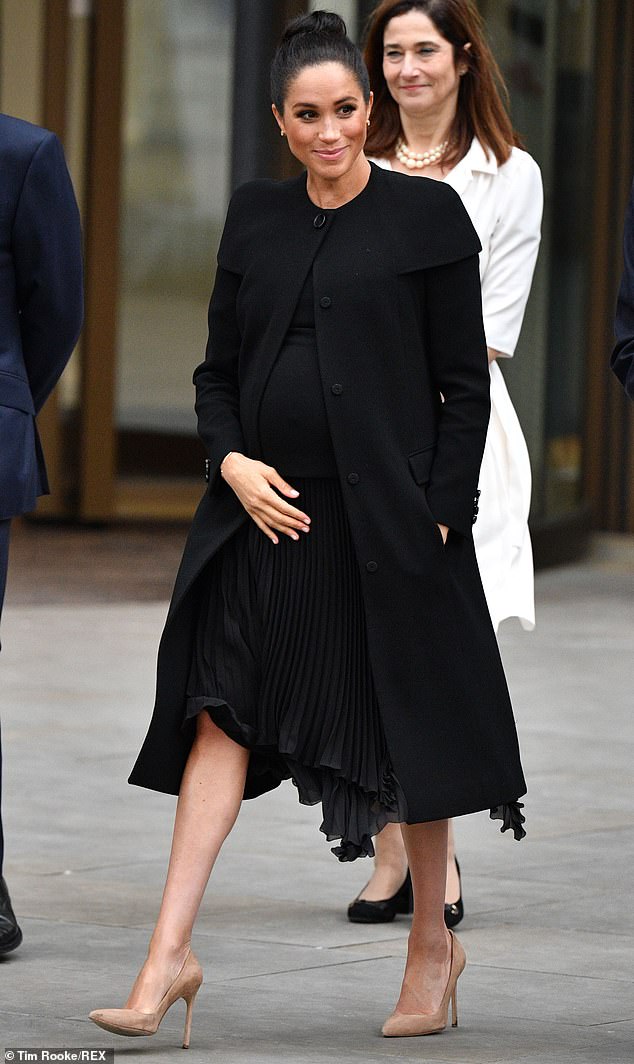 Celebration: An unidentified source said the royal’s friends are throwing her a baby shower at an undisclosed private location for 15 guests on Tuesday

‘I love Ladurée in SoHo,’ she said at the time. ‘It’s like a little slice of Paris in the middle of New York City.

‘It is absolutely beautiful, and the courtyard is awesome,’ she added. ‘Everyone should get the Coupe SoHo, which is this amazing salted caramel ice cream. It’s delicious!’

When she isn’t enjoying pastries with her pals, she is spending much of her days relishing in the amenities available the unnamed five-star hotel where she is reportedly staying.

Sources confirmed to Harper’s Bazaar that friends are throwing Megan a baby shower at an undisclosed private location for 15 guests on Tuesday, the day before she leaves.

It seems likely that Jessica will stay in town to attend the shower, while Meghan’s former Suits co-star Abigail Spencer took to Instagram Stories on Monday to reveal she was traveling, suggesting that she may be headed to New York City for the shower. 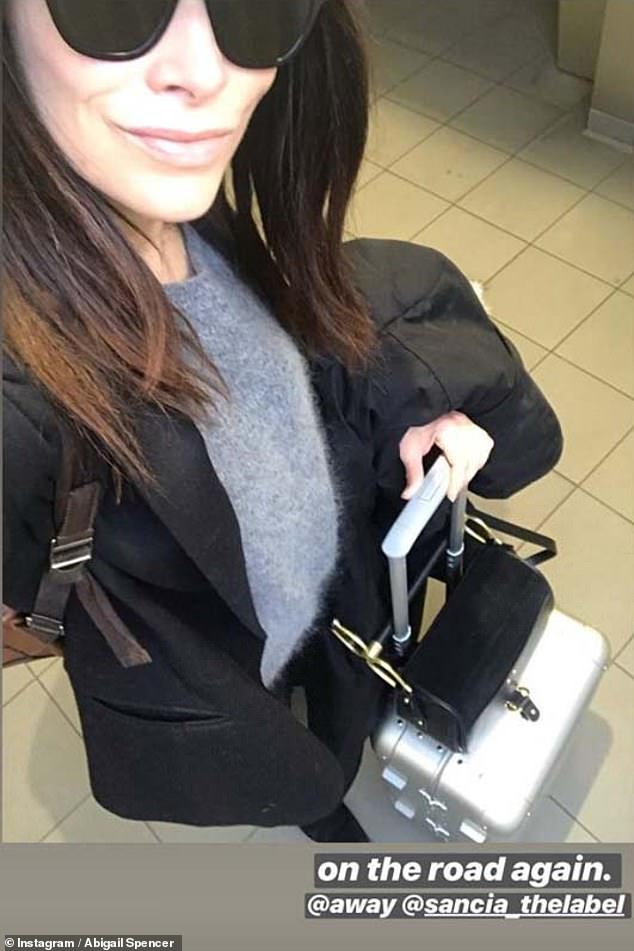 Headed to the Big Apple? Meghan’s former Suits co-star Abigail Spencer took to Instagram Stories to reveal she was traveling on Monday 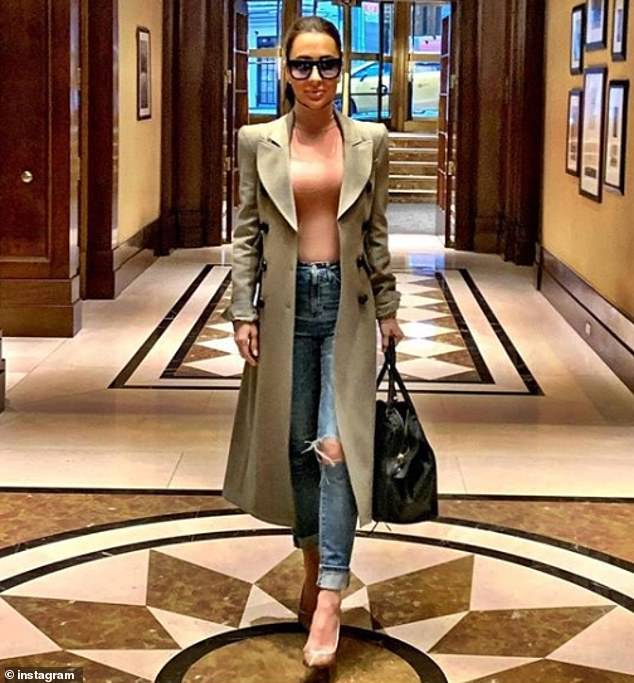 Another guest? It’s likely that Jessica, 38, stayed in New York for Meghan’s shower after arriving in the city last week to film a fashion segment for Good Morning America 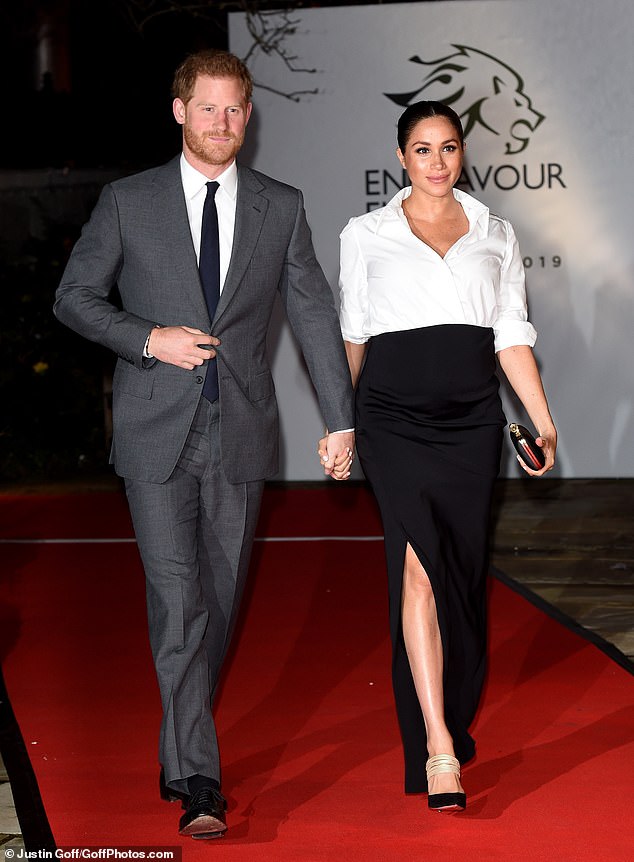 Royal return: The visit marks the first time Meghan has been in the Big Apple since she said ‘I do’ to Prince Harry in May 2018. The couple is expecting their first child is due this spring

‘On the road again,’ she captioned the selfie, which shows her silver suitcase.

‘The trip is a lovely chance to catch up with friends and spend time in a city she loves,’ a source told the outlet.

‘This will be the last time a lot of them will see Meg until after the baby is born so it’s nice to share precious moments.’

According to the unidentified friend of the royal’s, Meghan’s trip to the Big Apple was planned months ago.

‘It’s been a relaxing visit. Nothing beats face time with your friends,’ the person added. ‘Meg will be flying home refreshed and relaxed—and with a lot of new baby clothes.’

Meghan’s close friend Priyanka Chopra spent Valentine’s Day in London, and it’s possible they traveled to New York City together the next day.

Serena Williams, Suits star Sarah Rafferty, designer Misha Nonoo, brand consultant Benita Litt, and university pal Lindsay Roth, are among the friends who are likely to to be guests at Meghan’s shower. 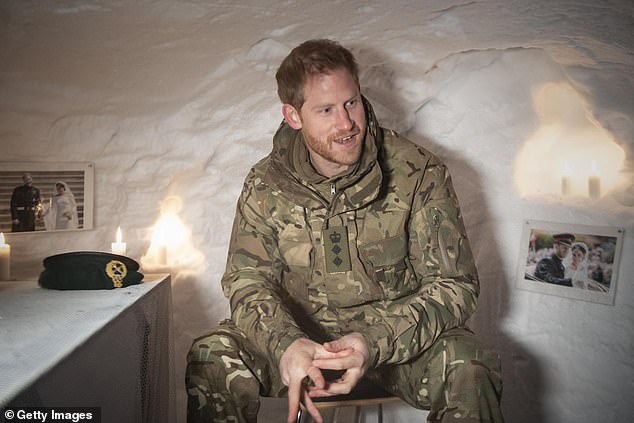 Away: Prince Harry, 34, spend the early part of Valentine’s Day in Norway, meeting British armed forces who are taking part in winter survival training in the Arctic Circle 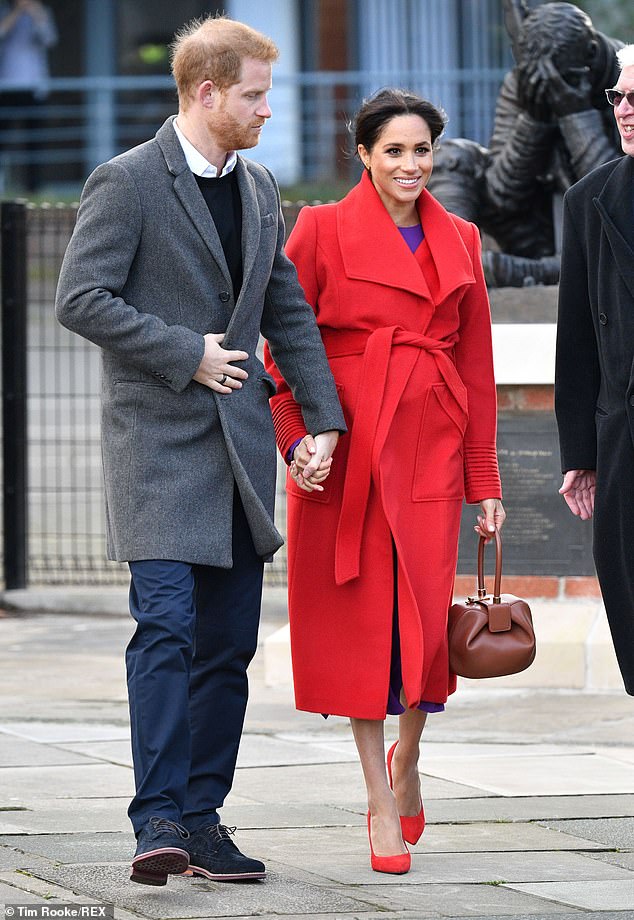 Romantic gesture: Harry chartered a private jet home from Norway to make it back in time to spend the rest of his day with his wife, who is a self-confessed ‘sucker for Valentine’s Day’

The day before she flew to New York, Meghan enjoyed a quiet Valentine’s Day evening with Prince Harry, their first as a married couple.

The Duke of Sussex, 34, spent the early part of February 14 meeting British armed forces who are taking part in winter survival training in the Arctic Circle.

As part of his visit, Harry was shown Quincey Shelter, which resembles a makeshift igloo. The space had been decorated with photographs of his wedding to Meghan ahead of his arrival, and he laughingly referred to as a ‘shrine’ when he saw it.

Harry chartered a private jet home from Norway to make it back in time to spend the rest of his day with his wife, who is a self-confessed ‘sucker for Valentine’s Day.’

Meghan wrote about her love of the romantic holiday on her now-defunct lifestyle blog The Tig.

‘Without fail, every February 14th, I wake up feeling like I’m immersed in a Robert Doisneau photo, waiting with bated breath to be dipped into a kiss,’ she wrote. ‘This is all happening in black and white, of course. And in Paris, if I had my way.

‘But delusions of Francophile grandeur aside, Valentine’s Day is special wherever you happen to find yourself. And in terms of gifts, be it breakfast in bed, a sweet love note, or a single flower, it really is the thought that counts.’

Meghan is expected to return to London on Wednesday, ahead of an official royal visit to Morocco with Harry on February 23.