Meghan Markle video from 1990 shows her dressed as a Queen

It would take another 26 years for her to fall in love with her real-life prince but these captivating images show a young Meghan Markle playing the fictional ‘Queen’ of a royal household.

Wearing a gold crown, eight-year-old Meghan stars in a childhood play – with her young chums as her princesses and servants.

These charming never-before-seen scenes are taken from an 11-minute video recently found by the mother of Meghan’s best friend of nearly 30 years, Ninaki Priddy.

The video was shot on January 29, 1990 – Ninaki’s ninth birthday – in the back garden of the Priddy family home in LA.

Ninaki, now 37, said last night: ‘The show was called Your Royal Highness and the star was Meg. It’s very funny to see this now and given what is going on with her life it’s quite eye-opening. She was always the centre of attention, always the ringleader – it was my birthday but she took the starring role!’

At the time, the friends were classmates at Hollywood’s Little Red School House. Ninaki says: ‘My parents were in the audio-video industry so we always had a camera around. We would do little videos.’ 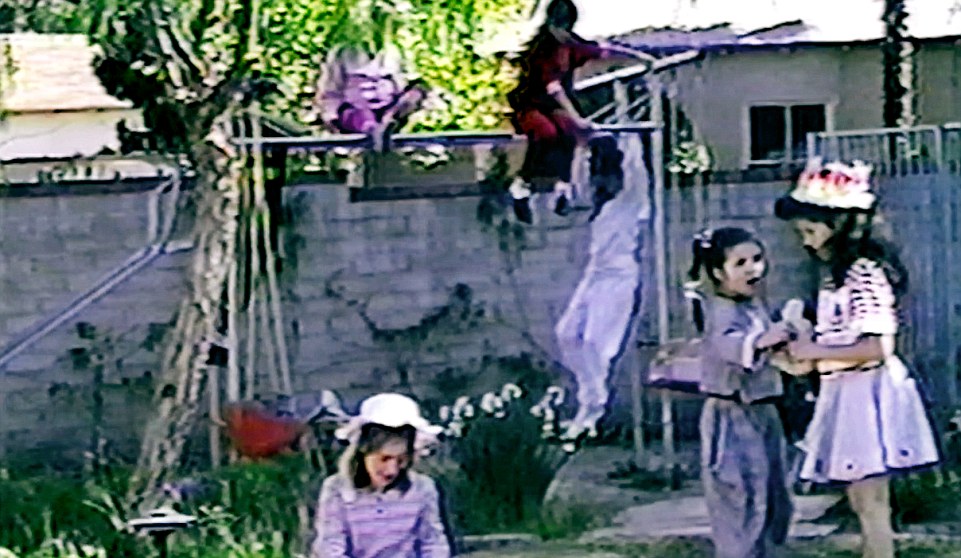 The footage was shot on the ninth birthday party of Ninaki Priddy on January 29, 1990 and was filmed in the back garden of the Priddy home in LA

In the film, as Ninaki’s mother Maria enters the garden with the camera, Meghan says excitedly: ‘You guys, look, we’re on video tape! Come here, you guys!’

She then whispers the plan to the other girls, looks at the camera and mimics a Hollywood ‘clapperboard’ with her arms and says with a flourish: ‘Your Royal Highness, Take One!’

Ninaki says: ‘The royal story came out of the blue, it wasn’t something we had done before. She just came up with it on the spot.’ 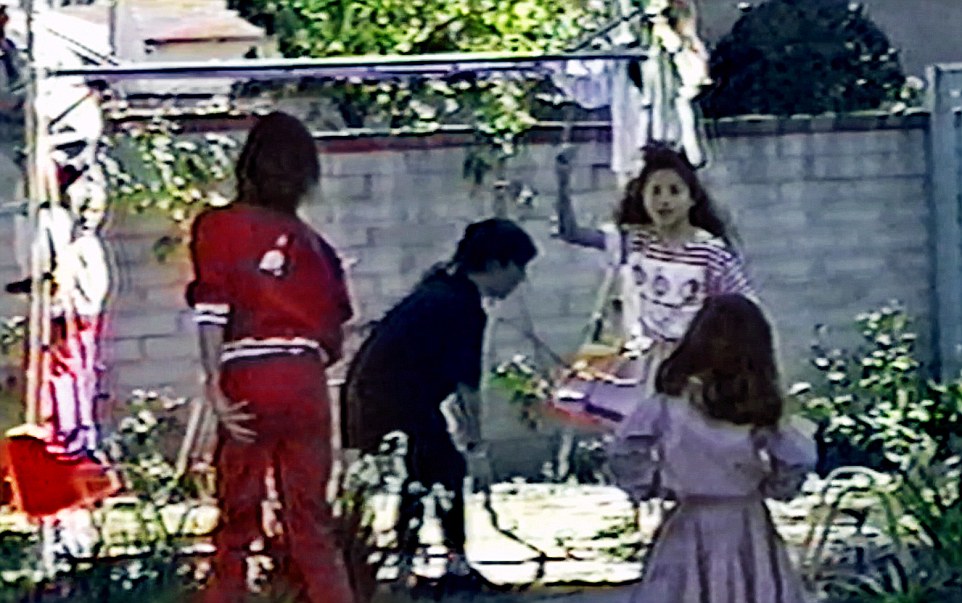 The video was recently rediscovered by Ninaki’s mother and shows a young Meghan acting as a queen while her friend Ninaki, who is the birthday girl, is relegated to a Princess role

In the video Meghan sits on a red blanket as another little girl, Melody, comes over and gives a deep bow.

Another child asks: ‘Your Highness, your Highness, isn’t there anything to do around this kingdom any more?’ Meghan replies grandly: ‘Yes, make 900,000 cookies… and sew me a nice dress.’

Another friend asks: “Your Highness, what is this all for?’ to which Queen Meghan responds: ‘It’s for this meeting I’m having. I’m having people from Florida and Canada, Mississippi, Missouri.’

Queen Meghan then motions with her hands and commands: ‘Come on Princess Niki’ [to Ninaki] while moments later she takes a picnic basket and gives it to the ‘servant’ girls saying: ‘I thought you guys might be hungry so here are some cookies.’ 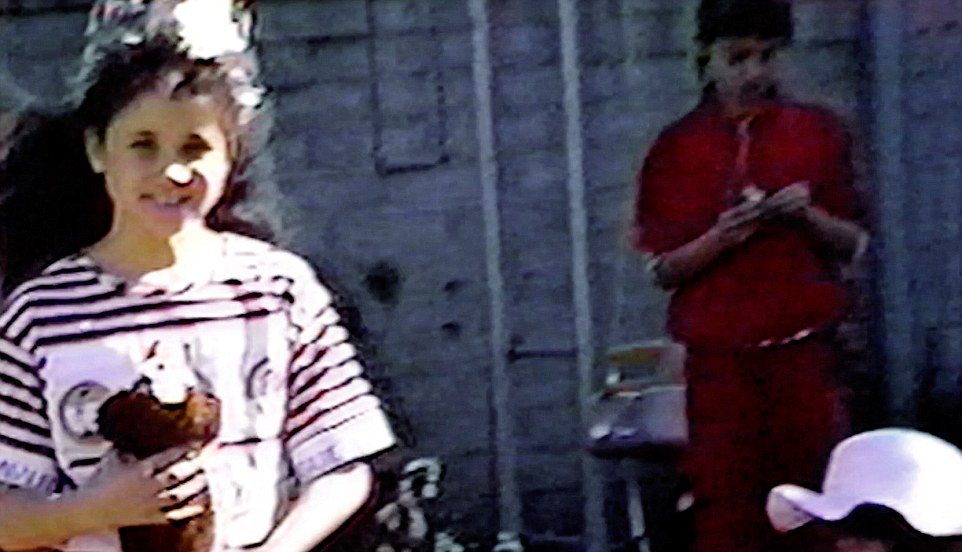 Ninaki, now 37, said last night: ‘The show was called Your Royal Highness and the star was Meg. It’s very funny to see this now and given what is going on with her life it’s quite eye-opening

When one child asks: ‘Can I go take a walk, your Highness?’ Meghan puts on a grand voice and replies: ‘Yes, you may,’ before shouting ‘Ten minute break!’

Later, inside the house, when filming starts again Meghan exclaims: ‘Now back to the regularly scheduled programme which is titled ‘Your Royal Highness – take two!’

She then ‘commands’ the girls to go outside (where the light will be better for filming) saying: ‘Follow me girls for my party – come along.’ A friend called Diana exclaims: ‘Your Highness, Your Highness, great party!’ which prompts Meghan to declare: ‘Oh, I’m so glad you are enjoying it.’

Later the girls sing Happy Birthday to Ninaki, with Meghan directly behind the birthday girl, centre stage – as she will be on May 19 when her childish fantasy about becoming a royal will finally come true. 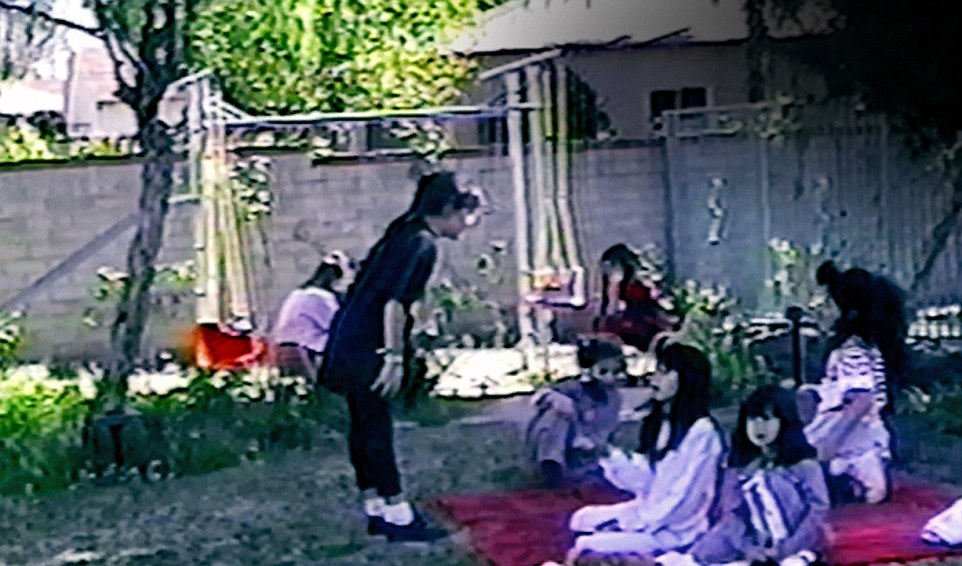 In the charming footage, Meghan sits on a red blanket as another little girl, Melody, comes over and gives a deep bow. Later, another child asks: ‘Your Highness, your Highness, isn’t there anything to do around this kingdom any more?’ 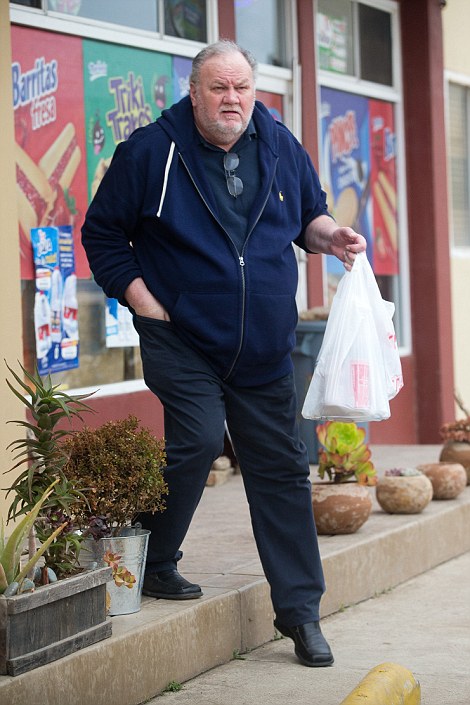 Tom Markle, pictured above on Friday, will walk Meghan Markle down the aisle for the royal wedding on May 19, a close friend told The Mail on Sunday

Meghan Markle’s reclusive father will walk her down the aisle, a close friend has told The Mail on Sunday.

After months of speculation about whether retired Hollywood lighting director Tom Markle will be by his daughter’s side in Windsor Castle, one of his closest confidantes last night confirmed: ‘He will.’

And Kensington Palace has been told that the 73-year-old will be flying in for the ceremony from Mexico, where he lives in a sleepy retirement community.

‘He’s very excited about it,’ said the friend: ‘He’s very close to her [Meghan] and he’s very happy. All the pressure has been hard on him and he’s just trying to stay out of the limelight.’

The woman also said Mr Markle does not know what he will wear on the big day adding: ‘The Royal Family controls that. We’re not sure.’

She declined to be named – but, after being pictured sharing a pizza with Mr Markle at a local restaurant last week, denied that she was romantically involved with Harry’s future father-in-law.

Mr Markle has not yet met the Prince, and it is not known when he will. But his friend said: ‘He likes Harry. He thinks he’s very much a gentleman and he’s looking forward to the wedding.’

It has been rumoured that Meghan could break with convention and have both her father and her mother, Doria, walk her down the aisle on May 19.

Doria, 61, met Harry at last year’s Invictus Games in Toronto, and the Princehas described her as ‘amazing’. Tom and Doria, a social worker, divorced when Meghan was six, and she has subsequently been closer to her mother.

A family source said: ‘Meghan sees more of her mother because Tom leads such a quiet life, but she adores both her parents. It would surprise no one if she has both her mother and father accompany her.Tom has said from the start that he wants to walk her down the aisle, and that has never changed.’

The Mail on Sunday spoke to Mr Markle outside his seafront bungalow yesterday. He confirmed the woman who spoke to this newspaper was ‘a good friend’ – but nothing more. ‘I have no girlfriend,’ he added. ‘Have a good day, man.’

He met the young mum, an American, in the street when she was with her ten-year-old daughter. ‘He told me how cute she is and that he misses his kids,’ the friend said. ‘My daughter reminded him of when his kids were little.’

Mr Markle – who moved to Rosarito Beach in Mexico after being declared bankrupt in 2016 – has previously called Harry and Meghan ‘a very good match,’ saying: ‘It’s wonderful. I’m very happy for them.’

Last week the wedding invitations were finally sent out. The Mail on Sunday understands that the guest list includes British stars, including the Beckhams, international figures such as Canadian premier Justin Trudeau, and close friends from the US, including designer Misha Nonoo.

How do you feel about your ex? What the Archbishop may have said to Meghan Markle in a probing personal interview under Church of England ceremonies 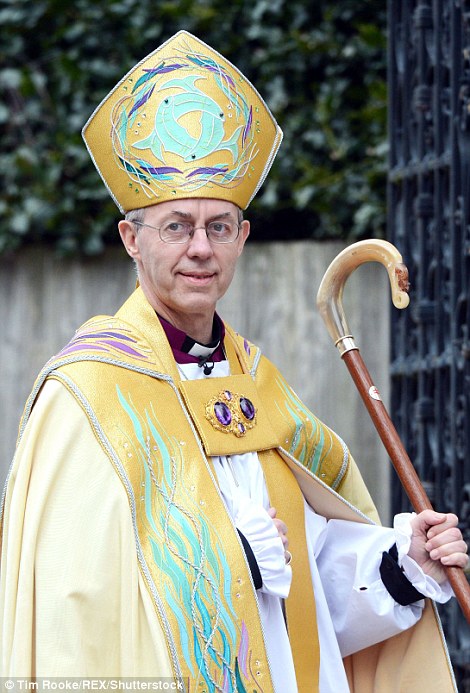 The Archbishop of Canterbury Justin Welby, pictured, asked Meghan Markle a series of awkward and intimate questions during preparation for the royal wedding

The Archbishop of Canterbury has asked Meghan Markle a series of awkward and intimate questions about her former relationship in preparation for her wedding, The Mail on Sunday can reveal.

Justin Welby was duty-bound to conduct a probing personal interview with the Royal bride under guidelines governing Church of England ceremonies for divorcees.

Meghan has never spoken publicly about her split from TV producer Trevor Engelson in 2013, two years after they married on a Jamaican beach. In the divorce they cited irreconcilable differences, which friends attributed to Meghan being away from their California home while she filmed the TV drama Suits in Canada.

The Archbishop would have questioned Meghan about that relationship as part of Church protocol – a duty he is thought to have undertaken before he baptised her into the faith earlier this month.

Divorcees marrying in church are advised to ‘be prepared to consider some questions’ – which could include brides being quizzed over whether they still have feelings for their exes.

Other topics include: ‘What have you learned from your previous marriage? Has there been healing of past hurts? What do others think of your marriage plans?’

Mr Welby has formed a close bond with the Royal couple and has spoken highly of Meghan. Last month he said that her being a divorcee was ‘not a problem’.

The primate has also disclosed that his biggest concerns for the wedding were dropping the rings and forgetting the vows – mistakes he has made in previous ceremonies.

He will officiate as the couple make their vows at the ceremony at St George’s Chapel in Windsor Castle on May 19, but the service will be conducted by the Dean of Windsor, the Right Revered David Conner.

Why Cressida Bonas is barking mad about the wedding! Actress plays a dog jealous of its owner’s fiancee in her latest theatre role

Prince Harry’s former girlfriend Cressida Bonas has a bone to pick about an upcoming marriage – but thankfully it’s fictional.

In her latest and most eccentric role, the actress plays a dog jealous of its owner’s fiancee.

She wears an animal mask for the part in The Dog Beneath The Skin, written by WH Auden and Christopher Isherwood, and leaps about the stage as the pet whose owner Alan is due to marry his beloved Iris. 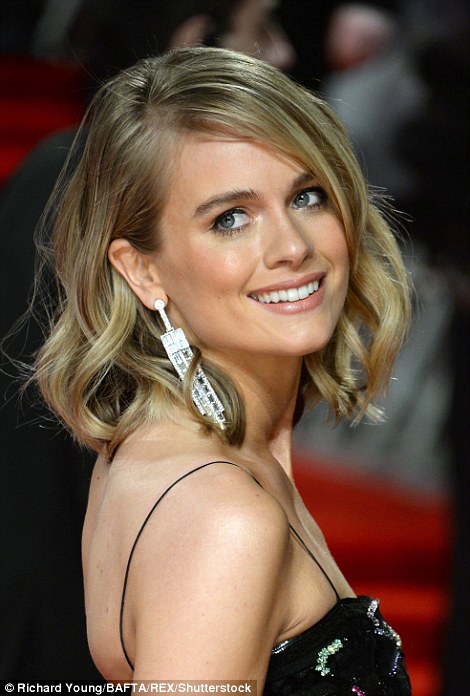 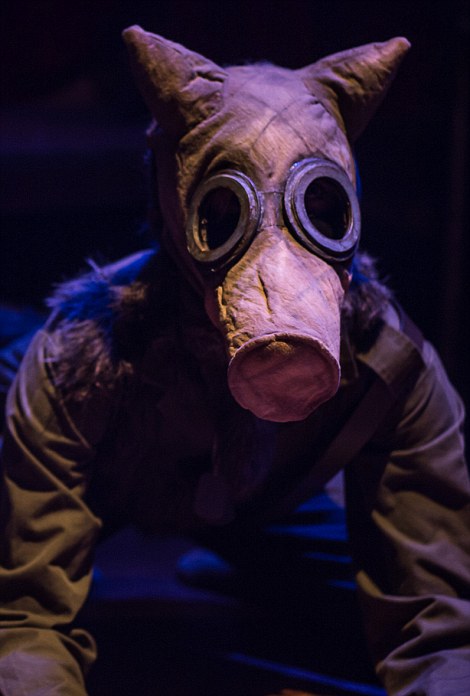 Prince Harry’s former girlfriend Cressida Bonas, an actress, plays a dog jealous that is jealous of her owner’s new fiancee. Pictured right is her on stage as the character and left is her out of costume

When Alan holds up a photograph of his fiancee, Ms Bonas’s canine character barks loudly. Alan explains that the dog’s behaviour was ‘as if he were jealous’.

The play, at London’s Jermyn Street Theatre, has had mixed reviews, but critics have praised 29-year-old Ms Bonas’s portrayal.

Prince Harry was introduced to Ms Bonas in 2012 by Princess Eugenie, but they broke up two years later. Ms Bonas is believed to have been invited to the Prince’s wedding.

Join us for jam and Jerusalem, say the Women’s Institute as they invite Meghan Markle to become a member

It would be the perfect way for Meghan Markle to embrace British culture – as well as indulge her love of flowers and passion for cooking.

So the Women’s Institute is now waiting to see if the royal bride-to-be will accept an invitation to join its ranks.

The 104-year-old organisation already counts the Queen and the Duchess of Cornwall among its members, with Her Majesty attending a meeting near Sandringham earlier this year.

Lynne Stubbings, chairman of the National Federation of WIs, said: ‘We would be delighted to welcome Meghan Markle. The WI has a long tradition of Royal members.’