The beaming Duke and Duchess of Sussex have met with Tonga’s Prime Minister as they continue their marathon 16-day royal tour, before taking in a noisy celebration of the country’s youth and culture.

Prince Harry and Meghan Markle dropped by the St George Government Buildings in the country’s capital Nuku’alofa for an early morning call on Akilisi Pohiva and members of the cabinet.

The mother-to-be was wearing a stripped green and white print dress by Australian-born fashion designer Martin Grant, brushing off the minor fashion faux pas she made when she arrived in Tonga in a striking red dress.

The Duchess, 37, still had the label hanging from her Self Portrait dress as she walked along a red carpet to the sounds of local singers wearing grass skirts at Fua’amotu Airport in Nuku’alofa on Thursday. 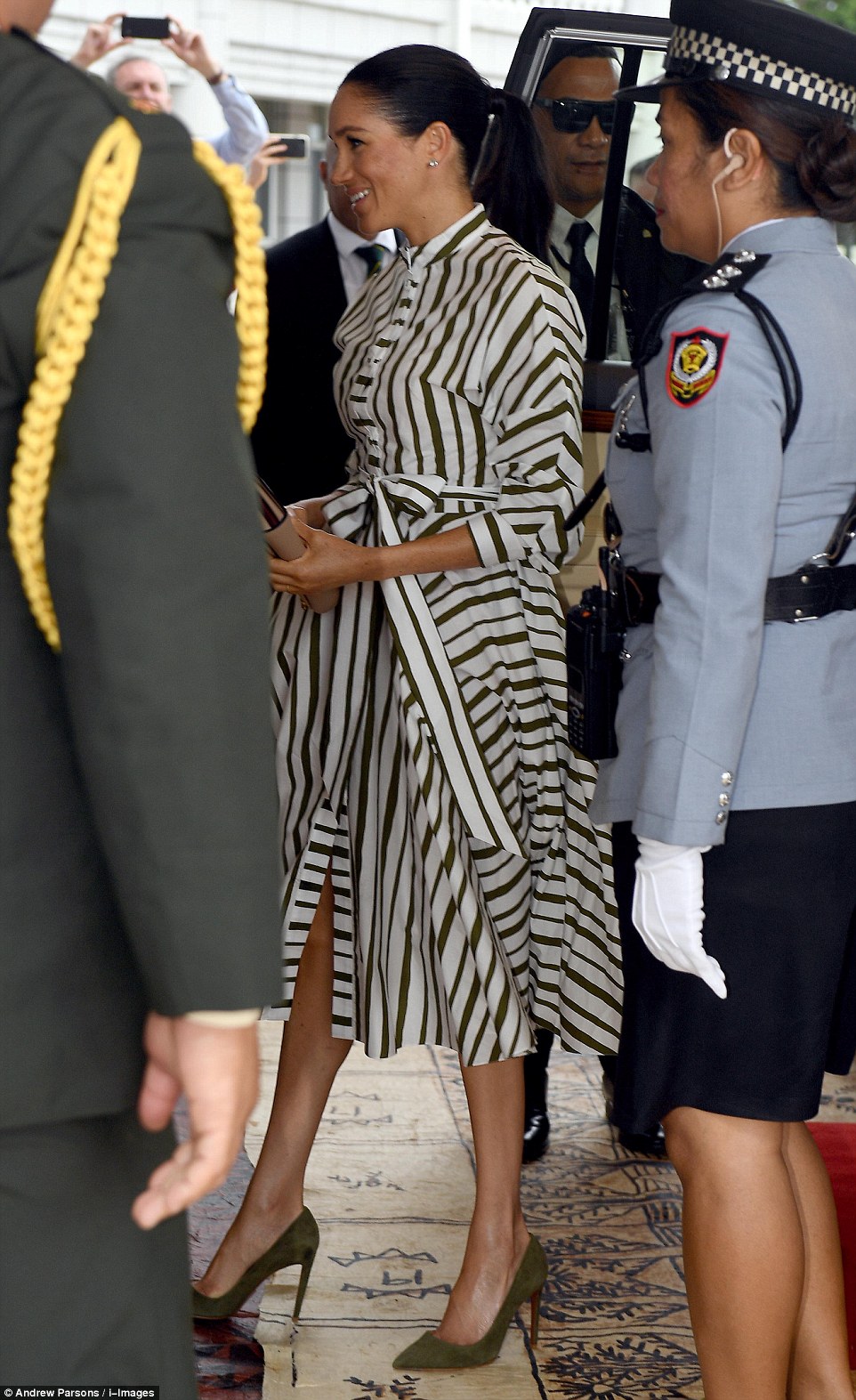 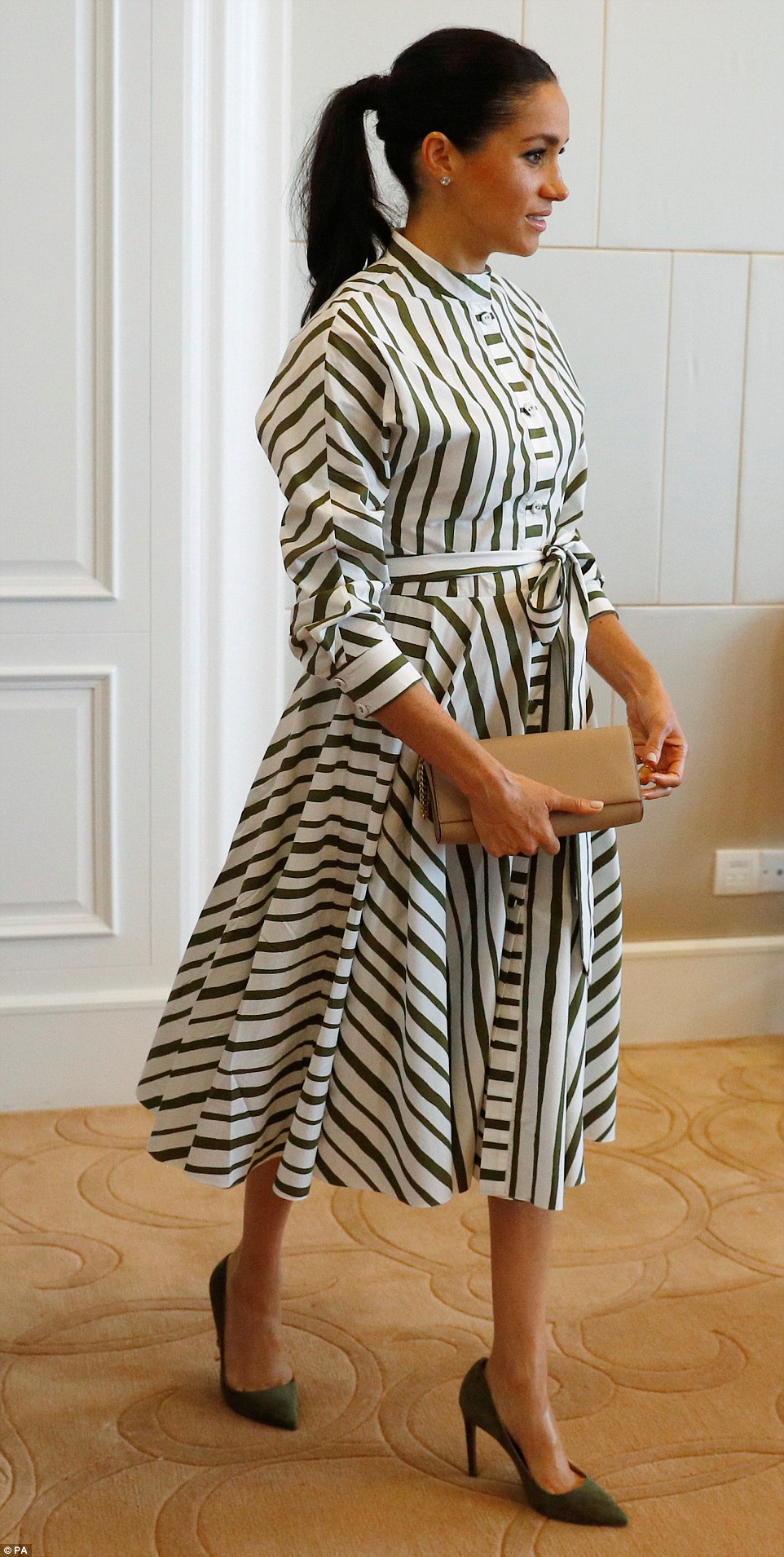 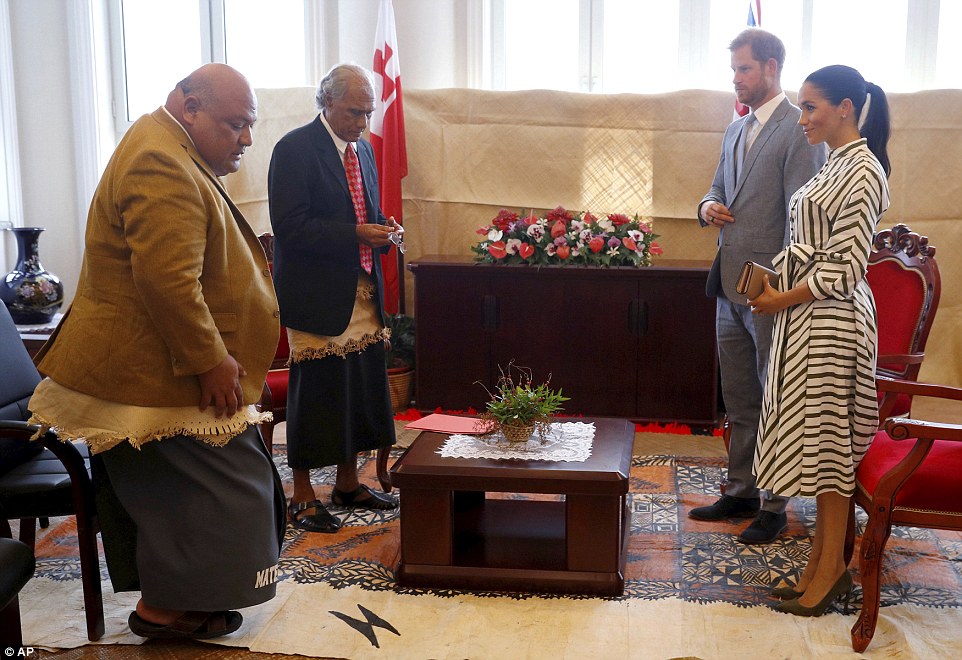 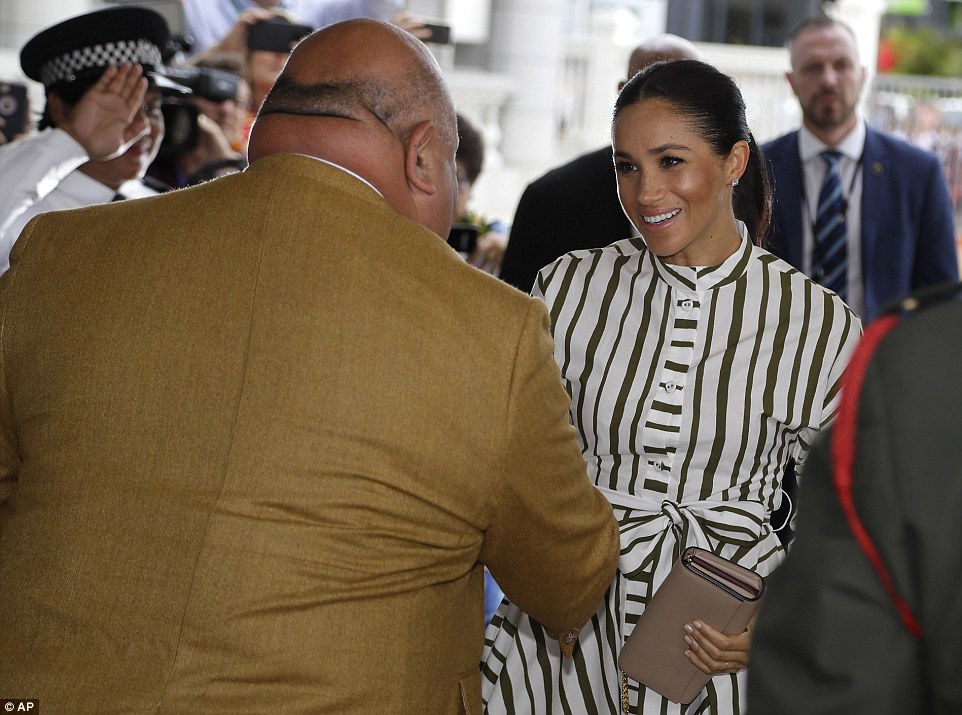 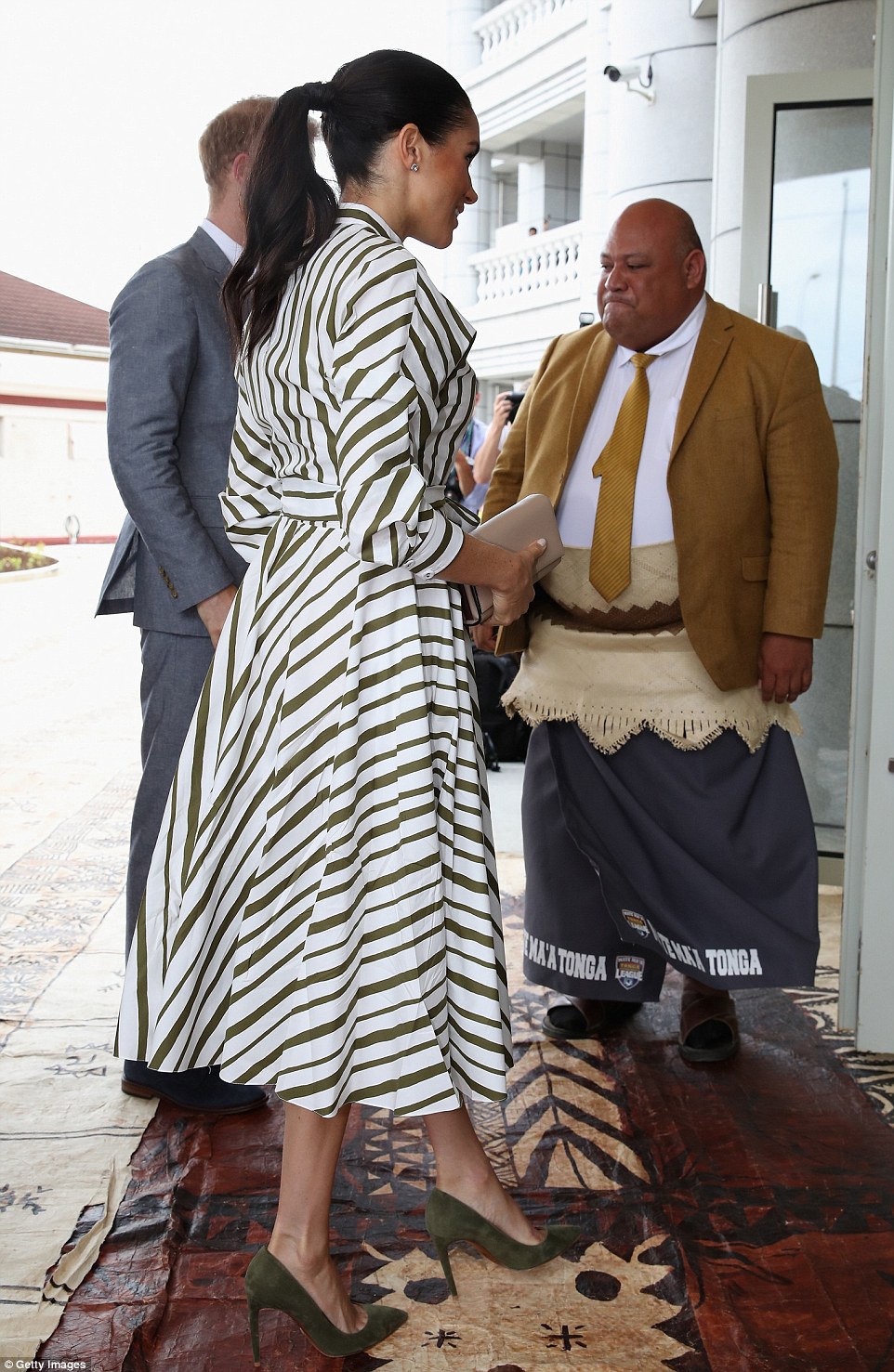 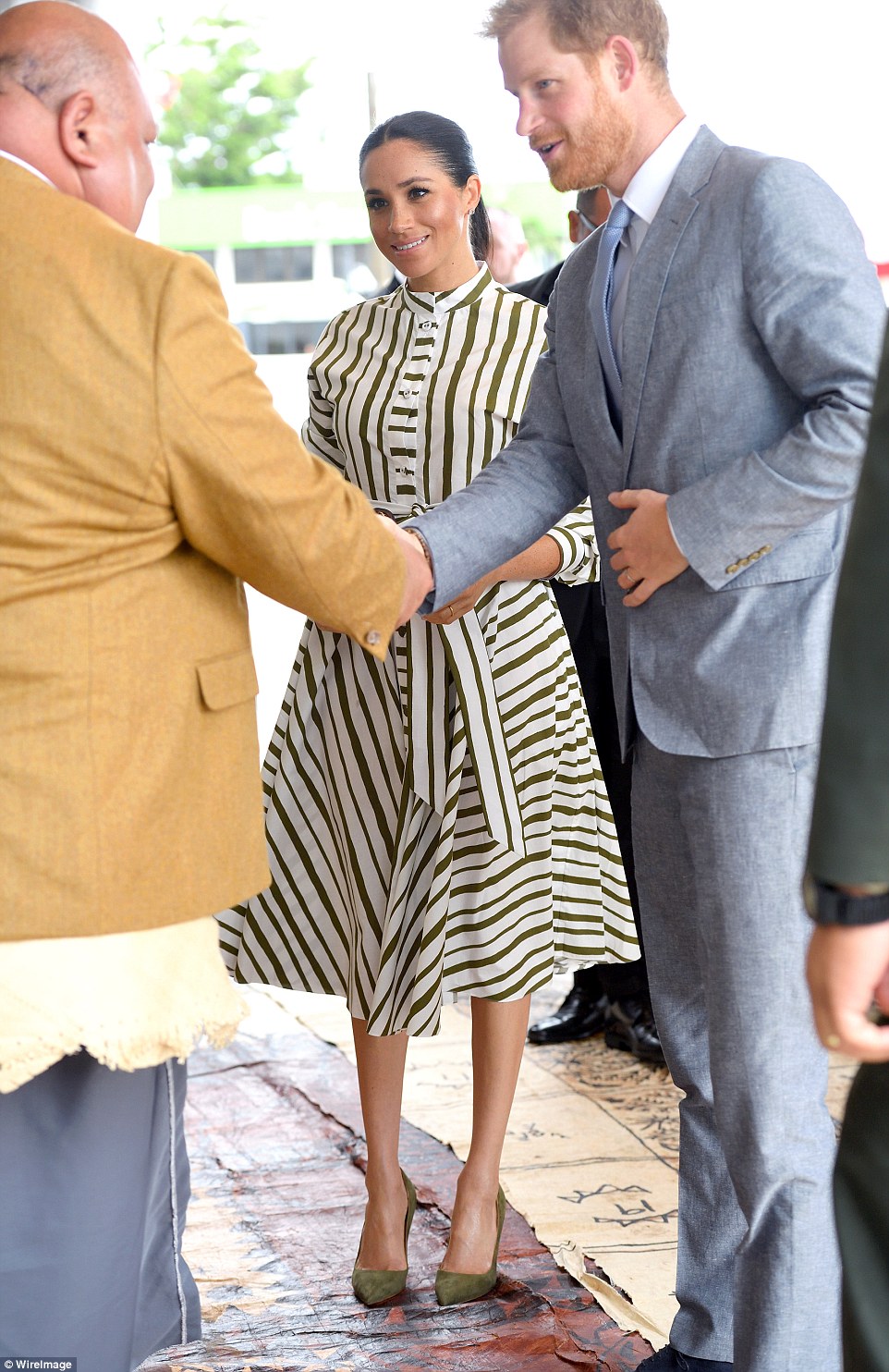 The Duchess, 37, paired her chic ensemble with a Prada Bibliothèque Bag and her Birks Bee Chic earrings 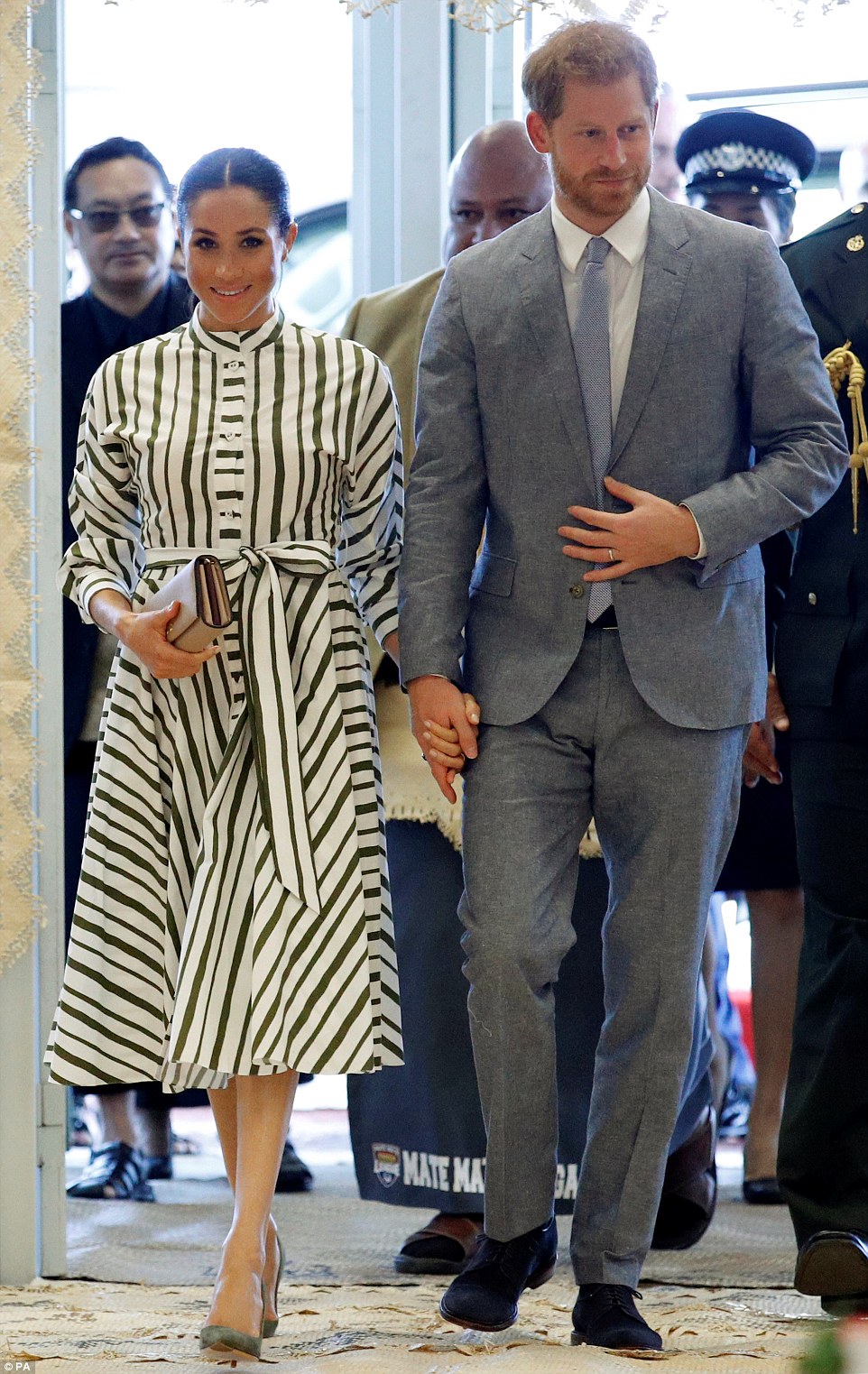 The Duke and Duchess are spending less than 24 hours in Tonga, in between visits to Fiji and Australia

The couple were also met by Deputy Prime Minister Semisi Lafu Kioa Sika and more than 50 civil servants wearing red and black shirts and traditional outfits as they entered the St George Government Buildings for the meeting, most of which was held in private.

One child held a sign saying ‘free hugs’ which drew a smile from Meghan after she spotted it.

The couple then took the lift to meet the Prime Minister, with Prince Harry asking ‘Did you enjoy last night? The entertainment was very good’.

He was referring to a display of traditional Tongan entertainment after a formal dinner with King Tupou VI.

The Duke and Duchess were later garlanded as they arrived for the noisy celebration.

The royal couple had the necklaces made from Fa and Puatonga flowers placed and tied around their necks as they were welcomed to the show of Tongan youth projects and handicrafts.

Prince Harry and Meghan, on the third leg of their four country Commonwealth tour, joined Princess Angelika and Prince Ata, King’s Tupou VI’s son and daughter, at the Fa’onelua Centre.

There they were showed locally-made products, including traditional mats and ‘tapa’ cloth, carvings and bracelets made from whale bone and wood.

Inside they sat on two throne-like chairs in the centre of the room, while Princess Angelika, delivered her short address after a prayer was read.

The princess said the royal couple were ‘an inspiration to the youth of the Commonwealth’ for ‘shining a light on youth empowerment’. 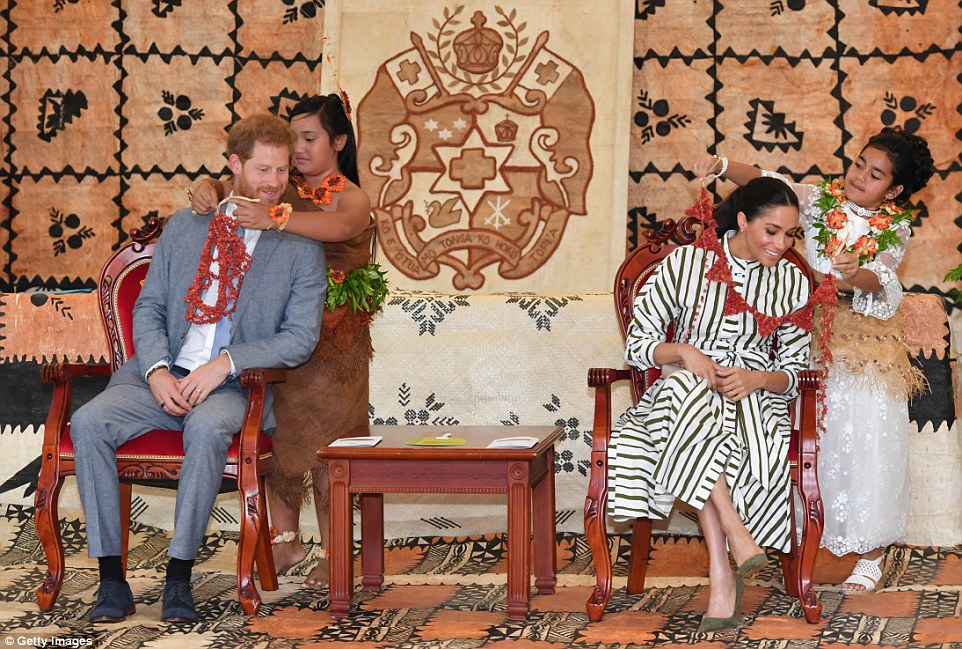 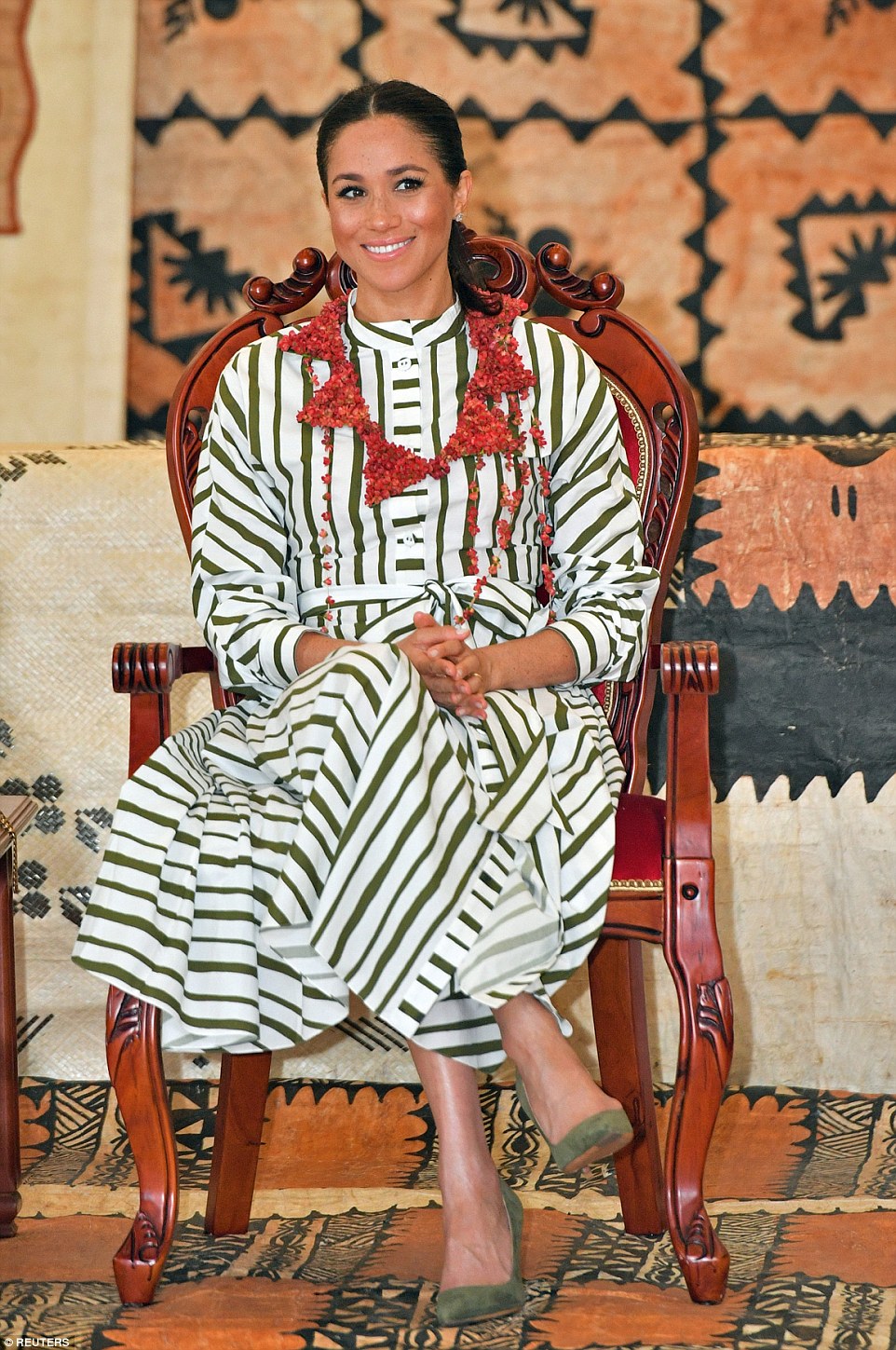 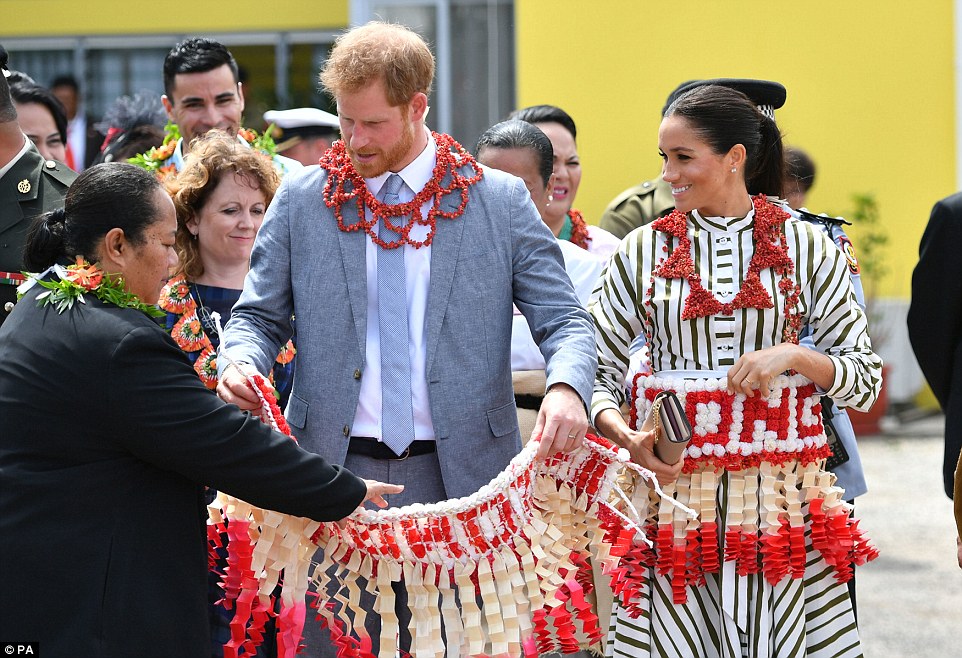 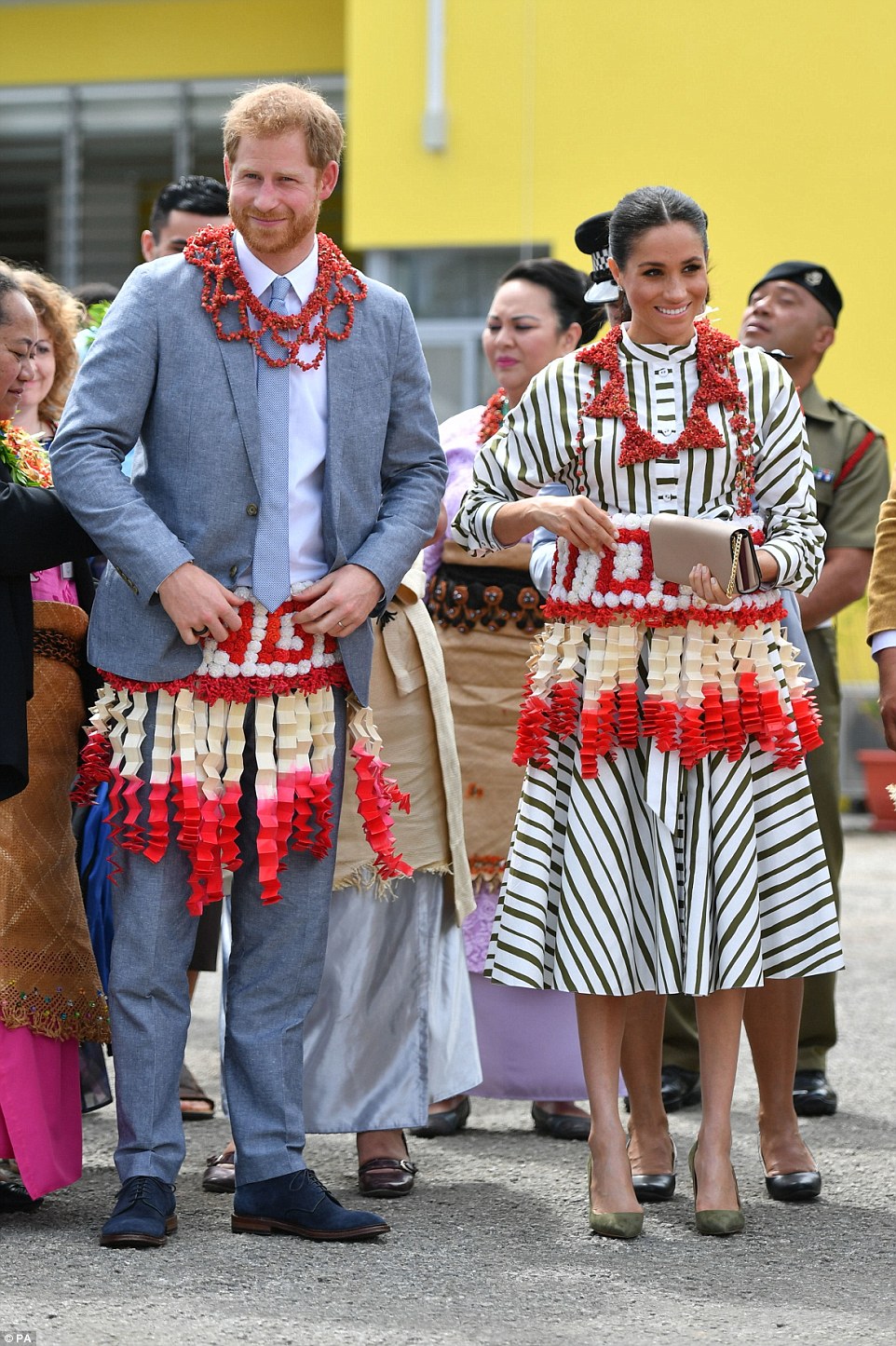 The couple were given a Taovala – an outfit added onto your dress – which signifies Tongan respect to the higher ranks. 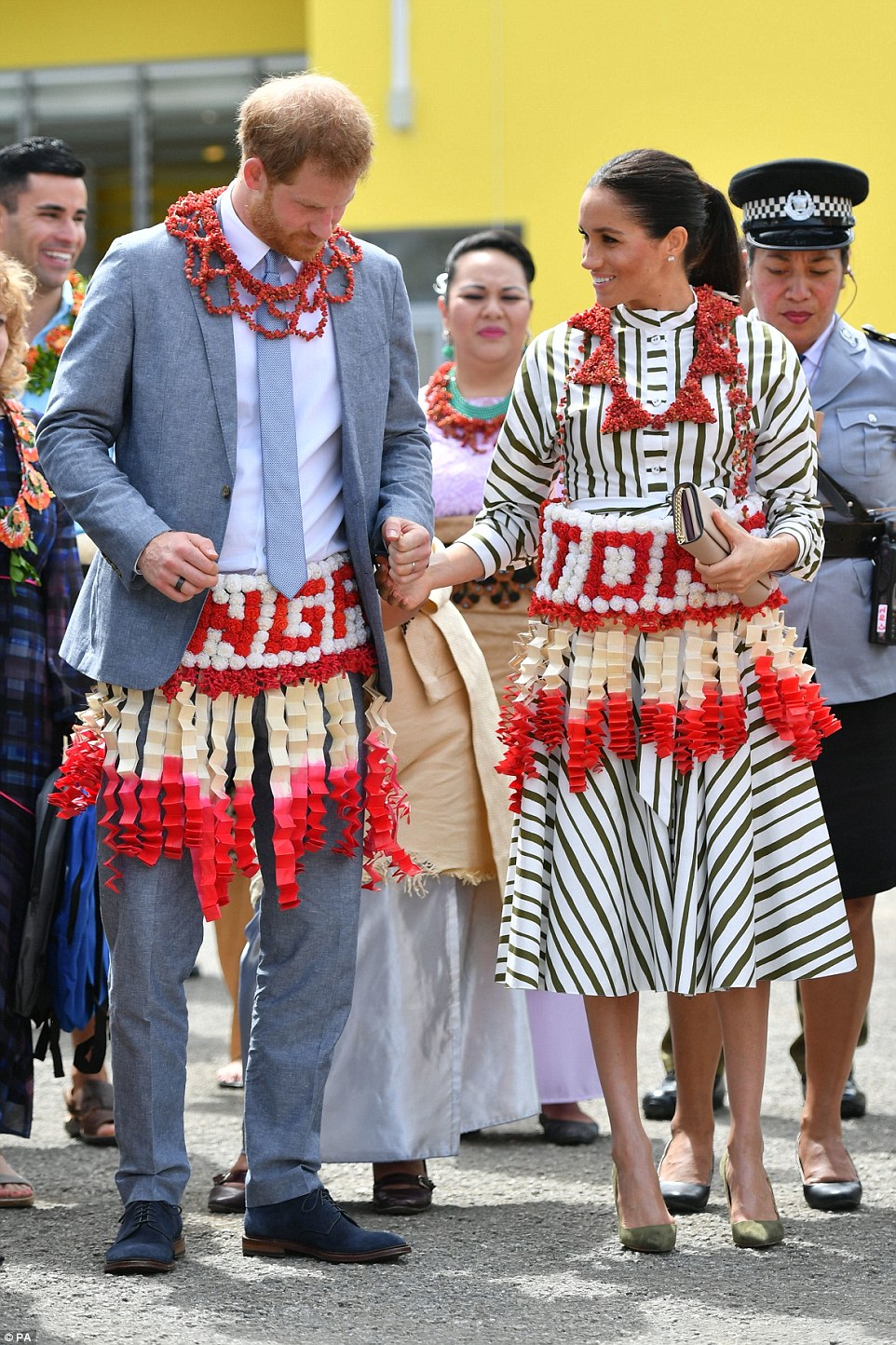 The royals were visiting the Fa’onelua Centre for a showcase of Tongan products, including traditional mats and ‘tapa’ cloth, carvings and bracelets made from whale bone and wood 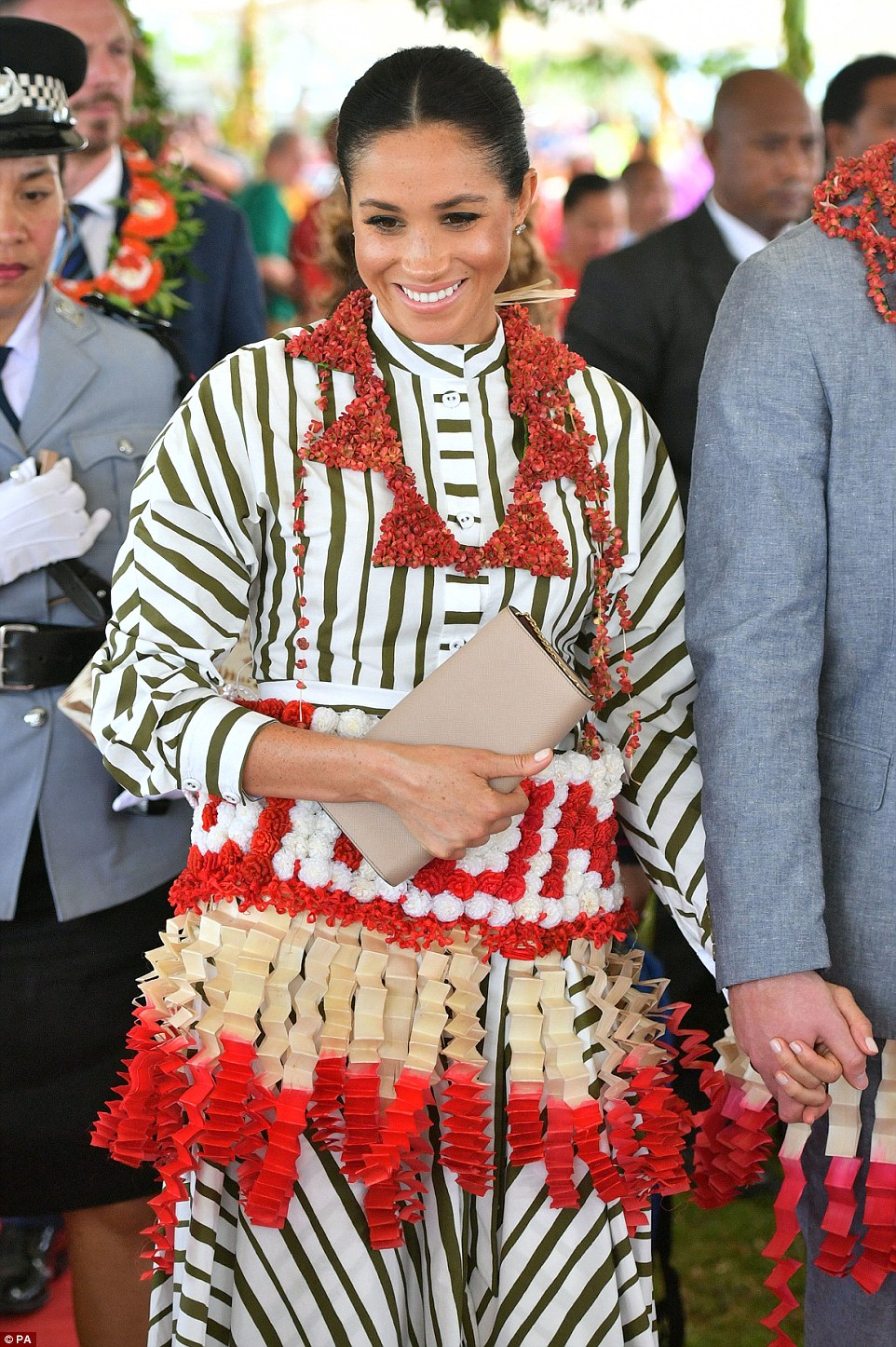 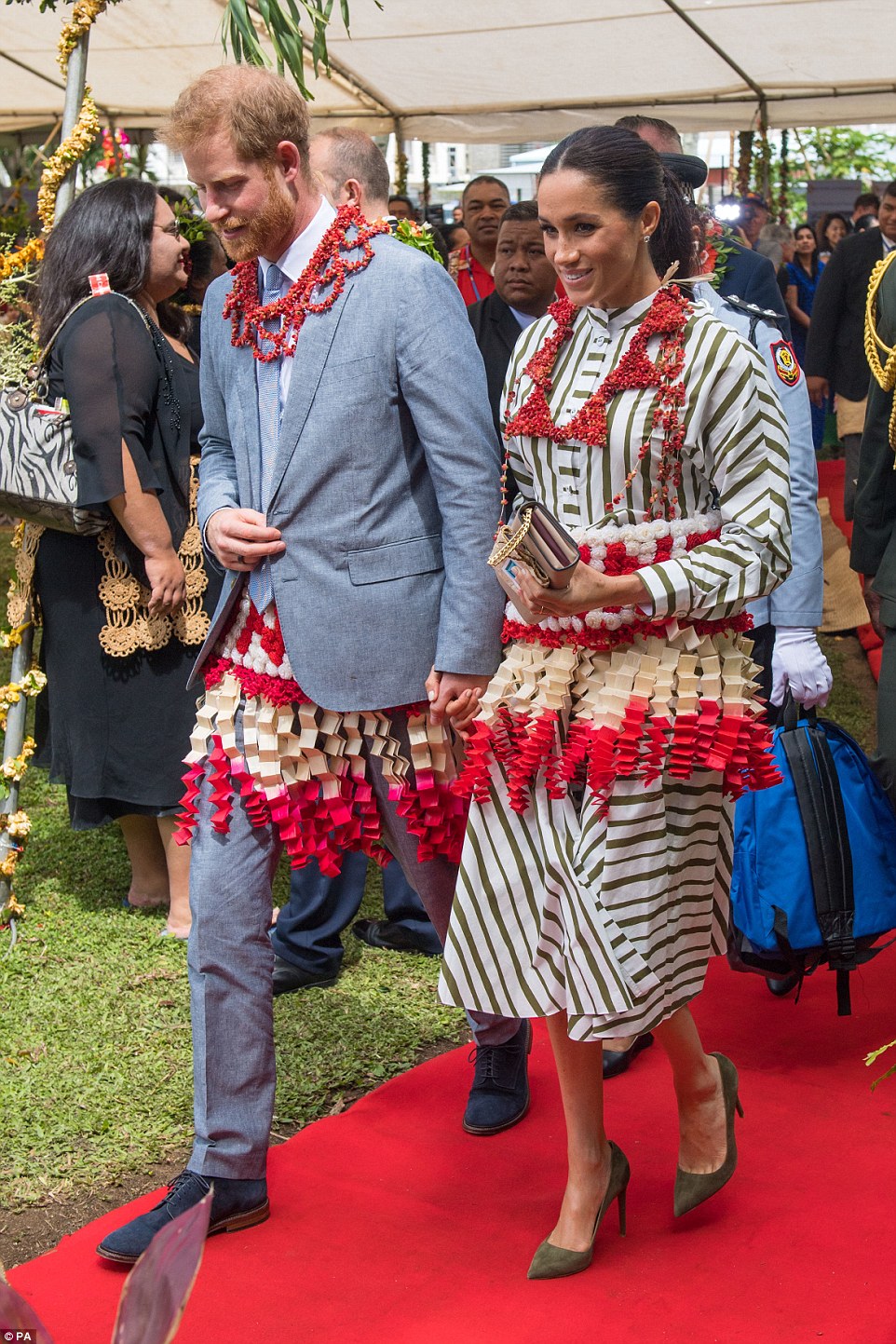 Tonga’s Princess Angelika, a diplomat herself, called the visit by the Duke and Duchess the ‘ultimate diplomacy’

And the princess added that their historic visit to the South Pacific to what Captain James Cook called ‘Friendly Islands’ had inspired the youth in Tongan to be ‘the best they can be’.

She said the ‘historical highlight’ in relations between Britain and Tonga had been the Queen’s visit to the island in 1953.

‘Your visit today draws attention to the fundamentals of today’s youth, youth leadership, youth empowerment and addressing the social, economic and environmental challenges of our region,’ she said.

‘Your visits inspires and has been an inspiration for the youth of Tonga to be the best they can be. You are a beacon of hope to us all. Shining a light and being an inspiration to youth across the Commonwealth.’

The princess, a diplomat herself, called the visit by the Duke and Duchess the ‘ultimate diplomacy’.

Outside the couple were given a Taovala – an outfit added onto your dress – which signifies Tongan respect to the higher ranks.

They met local Tongan traders and craftsmen as the Masani group of singers and dancers performed island music and songs. Prince Harry appeared to do a little jig as the music started. 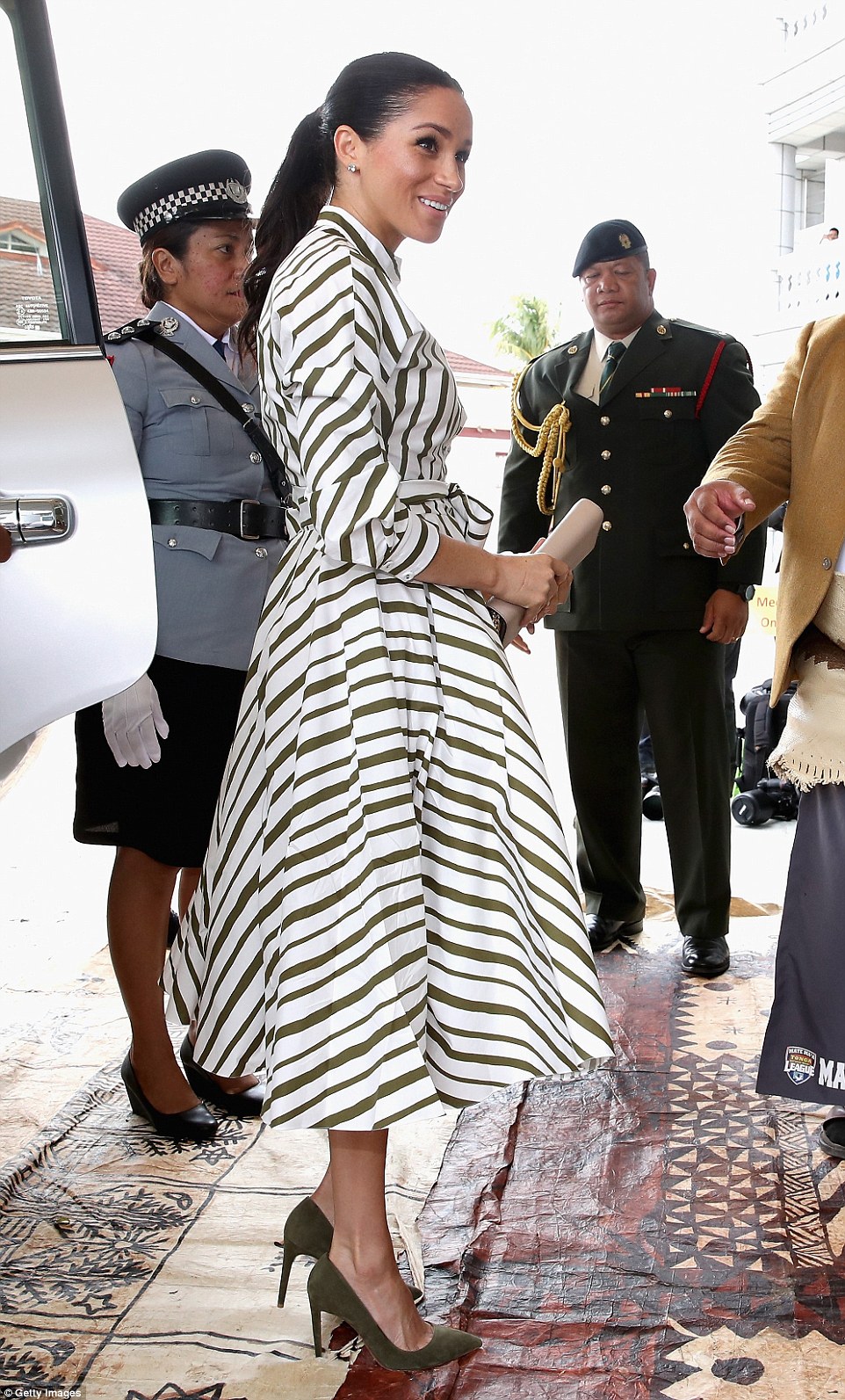 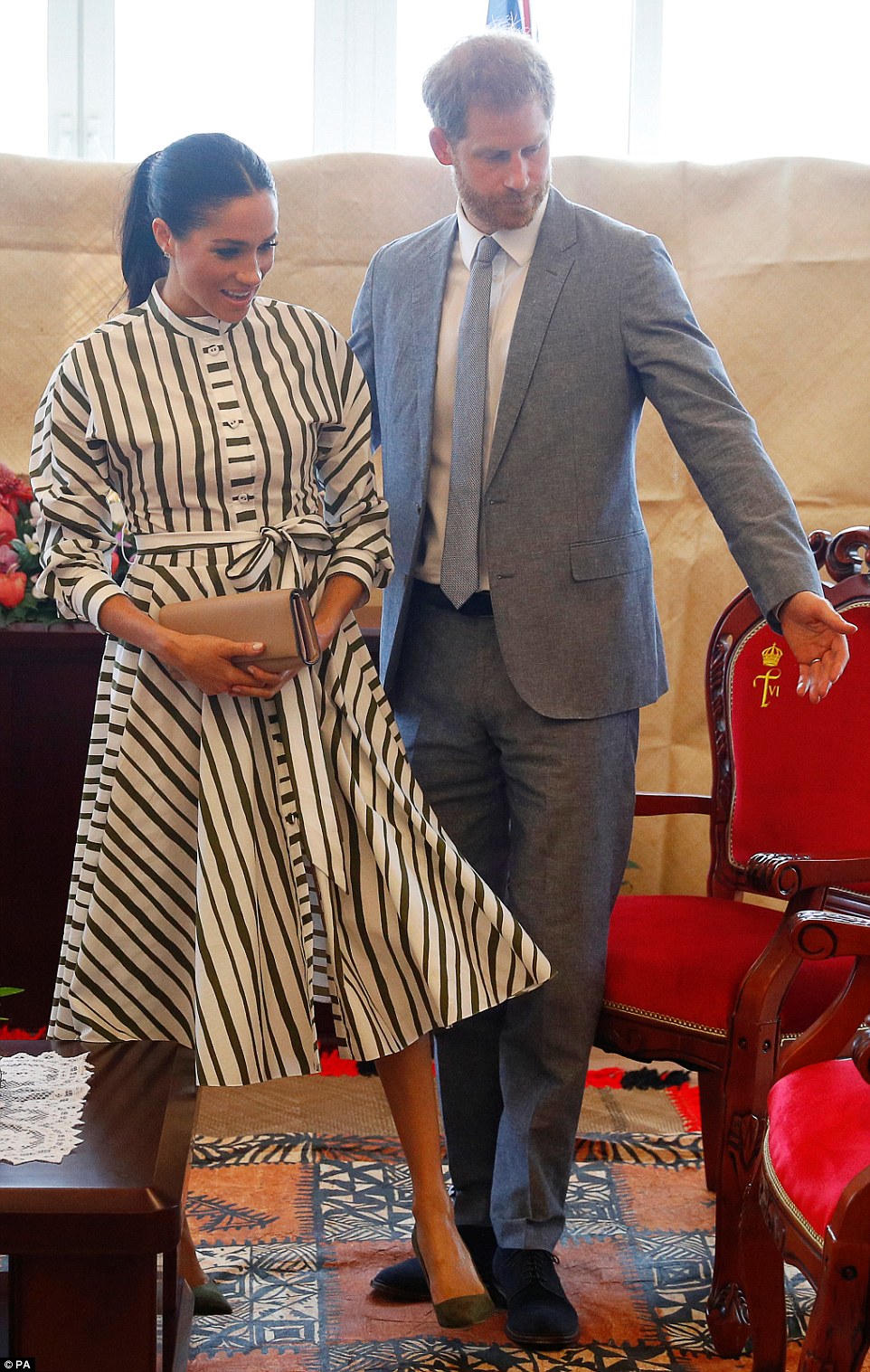 The Duchess was shown to her seat by her husband ahead of the meeting, the bulk of which was held in private 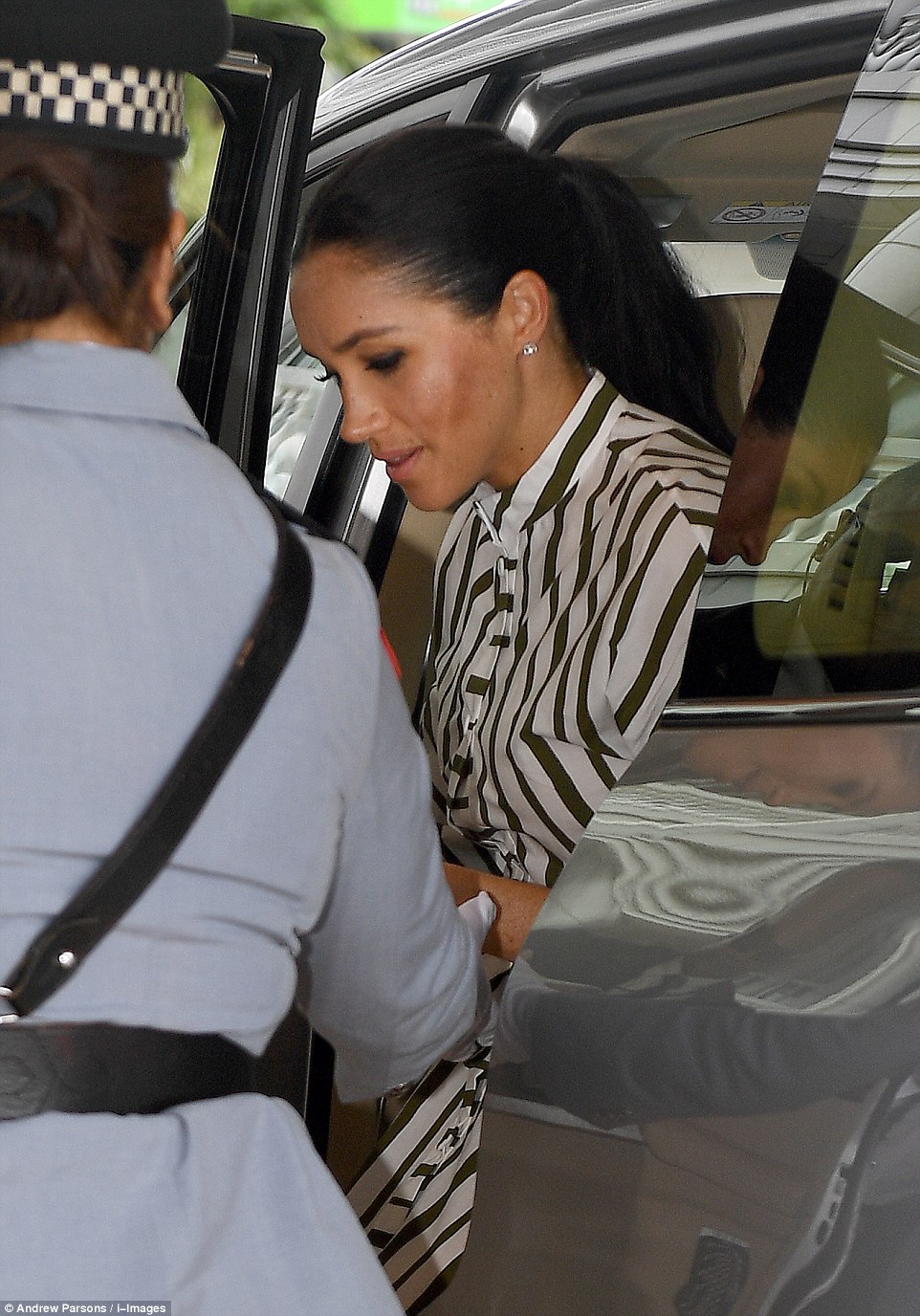 The Duke and Duchess are spending the morning in Tonga before they head back to Sydney, Australia as they continue their mammoth royal tour 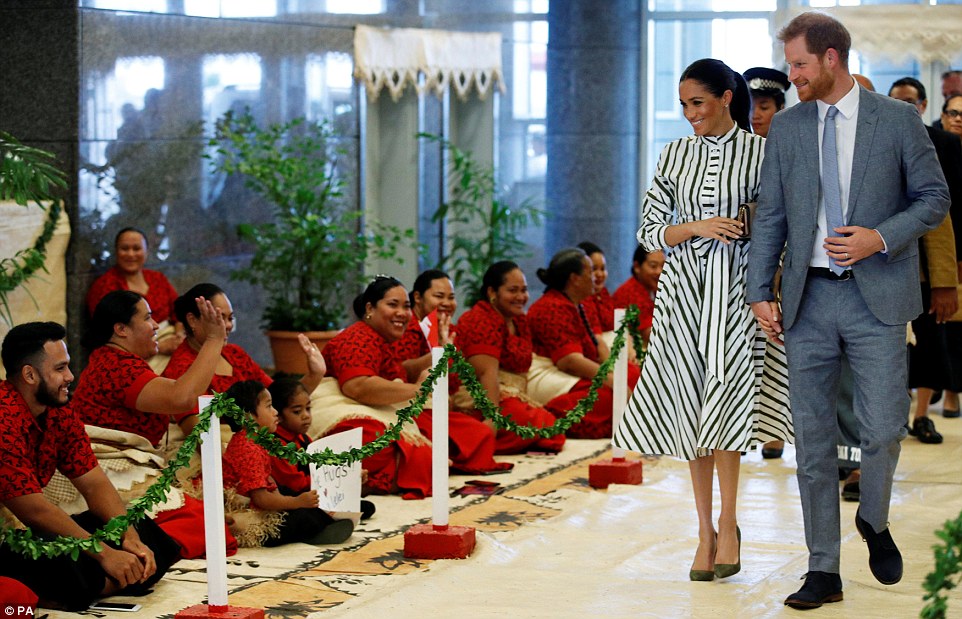 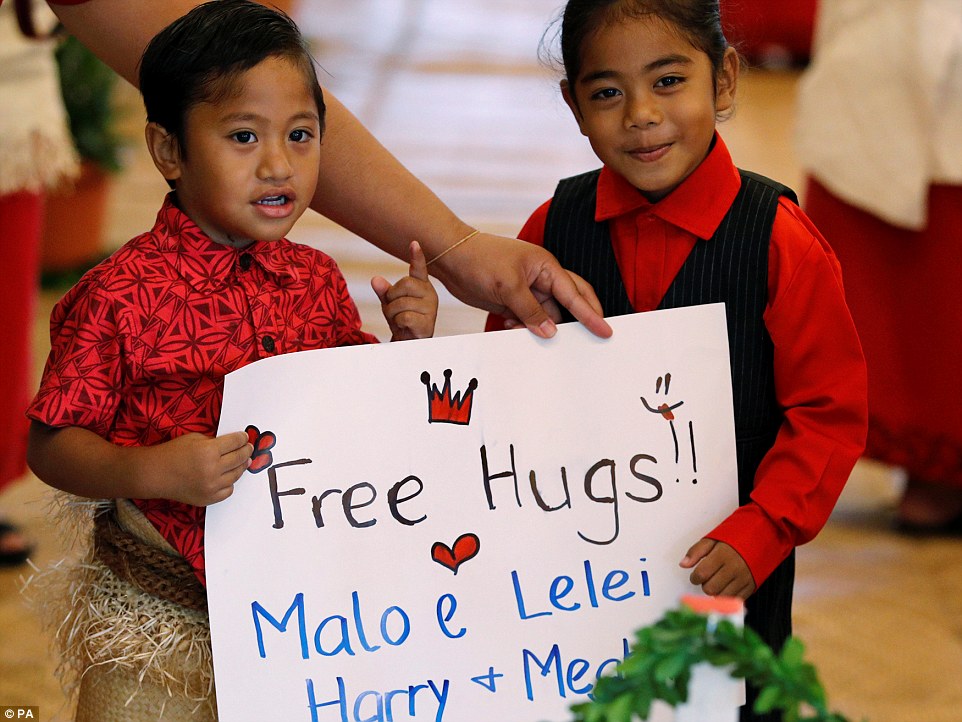 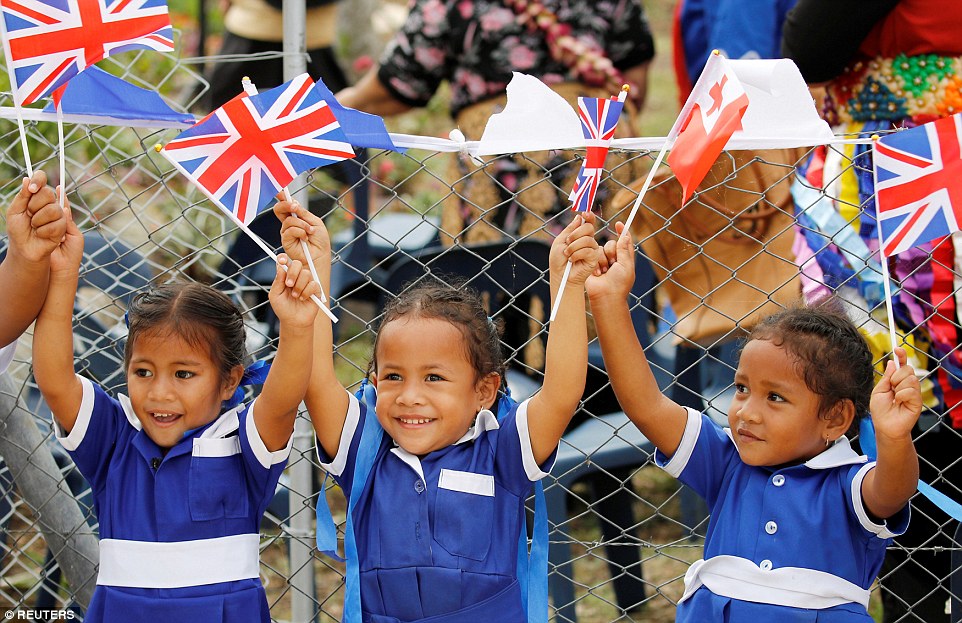 They were given a picture of the Royal Tongan Motif, Fata O Tu’i Tongan. Uili Lousi, art and artisan, said, ‘They said they will put it in their home’.

The royal couple will later visit The Royal Palace for an official farewell with The King before departing for Sydney, where they will attend the Australian Geographic Society Awards.

The next day, the royals will watch the Invictus Games wheelchair basketball final and then the closing ceremony of the Games which were started by Prince Harry.

Tonga is the third country the couple has visited on their first tour as a married couple, after travelling to Australia and Fiji.