Meghan Markle’s body language shows she has Prince Harry wrapped around her little finger, according to an expert.

But the flame-haired royal’s stance shows he is revelling the attention and can’t quite believe his luck, the specialist added.

The princess-in-waiting visited Belfast in Northern Ireland with her fiancé yesterday.

In earlier visits, Dr James said Miss Markle appeared more at home with the cameras and would subtlety choreograph their visits. 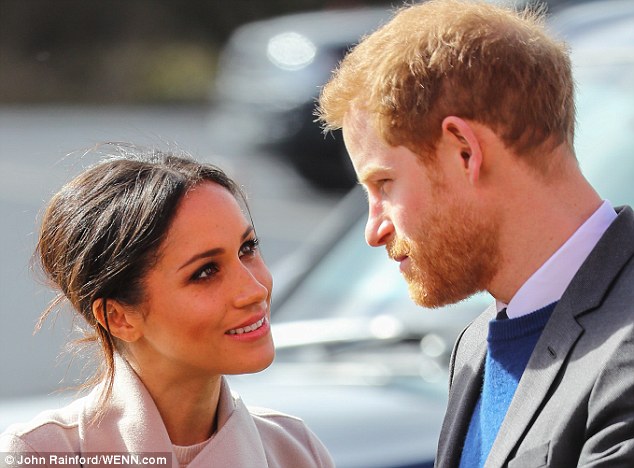 In a series of photographs taken over the course of their day-long tour of the Irish city, the Hollywood actress appears to struggle to keep her eyes from the Prince in what has been described as ‘intense eye gazing’.

Dr James said this is a new stance for Miss Markle: ‘This is something we haven’t seen her do before. Her body language is evolving as the wedding gets nearer.

‘This technique is called intense eye grazing, it would normally be used as an active listening signal.

‘It is used to flatter the person speaking. You see a lot of it in America but it’s not a particularly strong trait in the UK. This kind of eye contact is at risk of putting someone off their stride while they are speaking, she is also doing it at very close quarters.’ 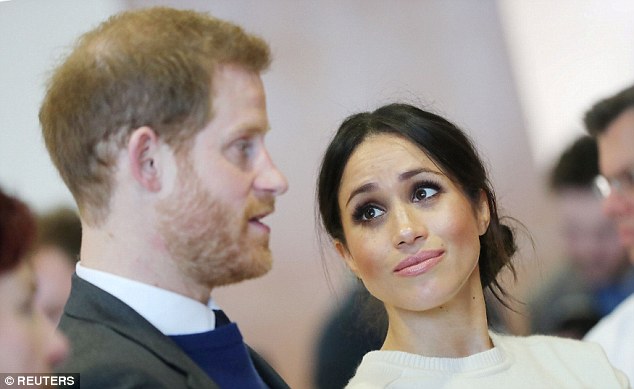 Undivided attention: The Suits actress showed a display of attentiveness as the flame-haired royal led conversation during a visit to Catalyst Inc science park in Belfast yesterday 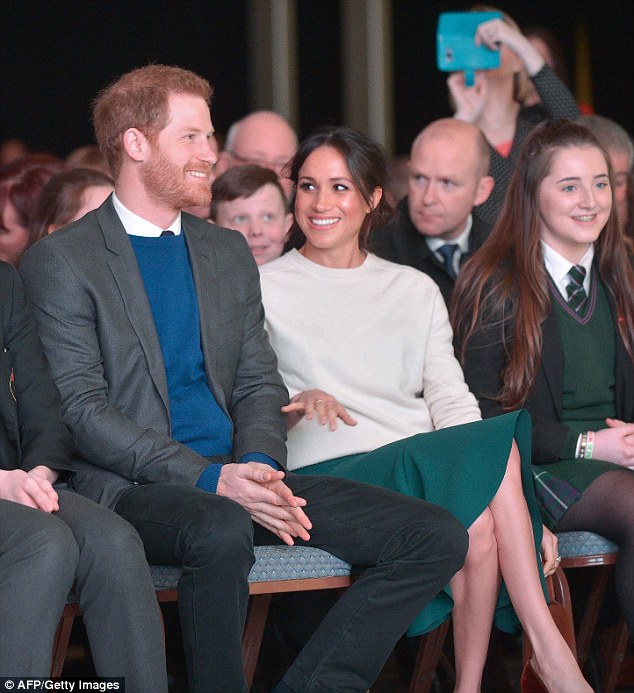 Welcomed distraction: Dr James said Miss Markle’s longing looks were being enjoyed by the Prince who saw it as an amusing distraction. Above, the pair at Eikon Centre in Lisburn

She said: ‘In the UK, this amount of eye contact and head closeness would normally only be used in the lead up to a kiss so it would be very difficult for Harry to continue to speaking.

‘It would be massively distracting, through in a good way as she is clearly flirting with him. He is clearly enjoying it. She looks stunning, he is just trying to go about his normal role and duties and it is almost making him laugh.

‘To be honest it almost looks as though he can’t quite believe his luck and managed to pull her in the first place and is now getting this level of intense eye contact and attention from her.

‘When you look at him compared to her, he is just wearing a jacket and a jumper it is not the most glamorous look but here there is this leading Hollywood actress who is stunning and gazing up at him, you can see his cheeks rounding slightly and he’s probably blushing. 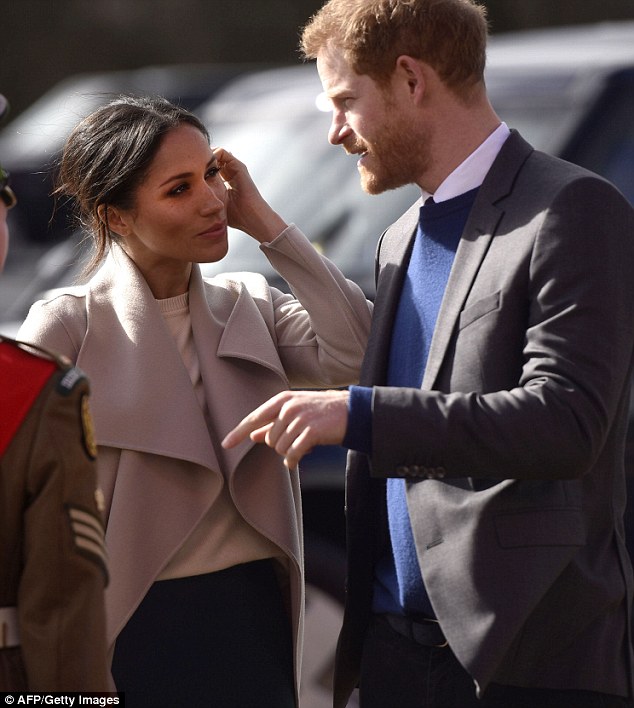 Coy glances: In this image, Dr James said Harry’s cheeks are rounding in happiness as Meghan gazes up at him

Dr James added: ‘This trait in American is very commonly used by high status presidential couples out in public. It was first adopted by Nancy Regan.

When asked if it was natural or conscious by Meghan, James said: ‘I don’t think it is natural, it’s a new phrase of body language she is moving into.

‘But now we are seeing quite submissive body language. To the waiting audience, this makes him look very heroic, like a besotted fan.

‘It may be that as the wedding is getting closer, she is bigging him up and making him look like the star.’ 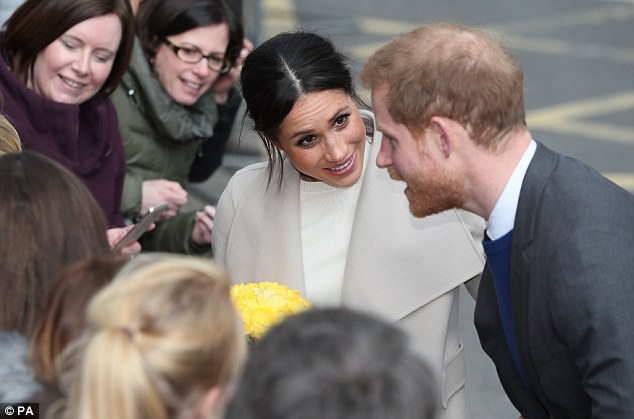 When asked about the power dynamic in the relationship, Dr James said: ‘She definitely has him wrapped around her finger. She tends to choreograph what they do, though very subtlety.

‘She has developed a trait when they started doing meet and greets, where she started to use self-diminishing body language poses such as touching her hair or shielding her face. I think that was psychologically very smart to get the crowd on side.

‘I’m not saying she is being negatively manipulative, but by showing these high approval signals she is showing she adores Harry as much as everyone in the UK does.

Dr James said she thinks Meghan is picking up tips from her future sister-in-law the Duchess of Cambridge.

She said: ‘Kate very much looks to Prince William as it is quite charming when she does it. Meghan has worn trousers up until now but if you look at what Meghan has worn on this visit – the skirt and heels – and carrying a clutch bag, this is very much Kate. But most of what I see from Meghan comes from Hollywood.

‘I hope she retains it. It will worry me slightly if she goes through the royal sheep dip and curtails her strong personality. Meghan is a different creature and I don’t think it will be good if the royal family start telling her not to be as interactive with the crowd. She is clearly a campaigner and will spend a lot of time going around the world and her ‘huggy nature’ is really works well for her.’