Meghan Markle has been inundated with praise from her friends following the launch of her charity high-street range – which is now being flogged for three times the price on eBay.

The Sussex Royal Instagram account shared a video of the Duchess giving a speech to introduce the new ‘Smart Works’ collection’ in London yesterday – which marked her first royal engagement since giving birth to Archie in May.

And it wasn’t long before her loyal pals took to the comments section, showing their support for the Duchess and her five-piece capsule collection. 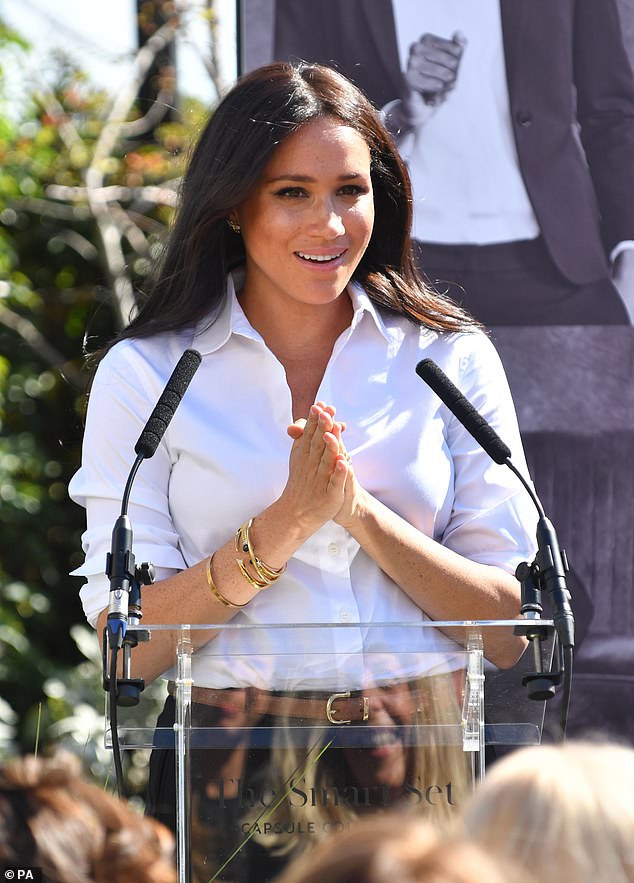 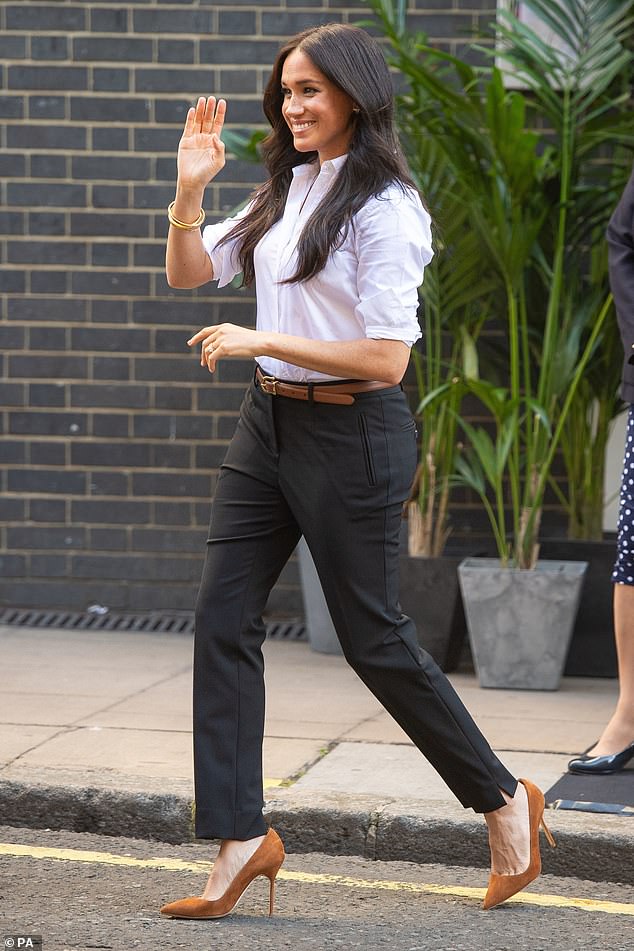 The series of outfits that can be worn in the workplace have been created in aid of Smart Works, a charity which provides training and interview clothes to unemployed women in need, and has Meghan (pictured) as its royal patron

Meanwhile, Heather Dorak, who is a confidante in Meghan’s close-knit LA group, simply sent a line of five heart emojis.

The timeless series of outfits – known as a capsule collection – that can be worn in the workplace have been created in aid of Smart Works, a charity which provides training and interview clothes to unemployed women in need, and has Meghan as its royal patron.

And designer Misha also shared her appreciation and commented: ‘It has been such an honor to participate in such a meaningful cause. Thank you sincerely for involving our business in the Smart Works mission.’

The Duchess of Sussex greets her designer and friend Misha Nonoo, with whom she has been working on the project

In the post shared on the royal Instagram page, the caption read: ‘Over the last year, The Duchess of Sussex and the Smart Works charity have come together to launch a very special initiative.’

‘Following numerous visits to the charity, The Duchess, who is patron of Smart Works, noticed an underlying issue… while the donations were plentiful, the right sizes and classic wardrobe staples were not always available.’

The full range in the capsule collection

‘Since then – having partnered with leading British fashion designers, the Duchess has championed the launch of a new Smart Works capsule collection that will help properly equip these women for their next chapter.’

And it seems the collection has been such a success, that fashionistas have snapped up the items and put them straight on eBay.

Several listings show the £19.50 M&S ‘Smart Set’ crepe dress in pink, black and blue, being flogged for more than double the asking price at £50 – with sellers charging a whopping £5.73 for postage.

Unfortunately, items bought from eBay will not benefit the Smart Works Charity – unlike those purchased from the official stockists and retailers.