Meghan McCain has revealed how she once got into a shouting match with her father Senator John McCain just after his brain surgery.

The Arizona Republican McCain, 81, decided to fly to Washington DC shortly after the July 2017 surgery to block a repeal of Obamacare, over his doctor’s and daughter’s strenuous protests.

The family drama is revealed in a new HBO documentary, John McCain: For Whom the Bell Tolls, which airs on Monday night.

‘He said, “I have to get back for the healthcare bill” and I said, “What could possibly happen if he gets on a plane?”‘ Meghan, 33, recalled in the film, according to People.

Meghan McCain (right) has revealed how she once got into a shouting match with her father John McCain (left) just after his brain surgery, begging him not to fly after the procedure 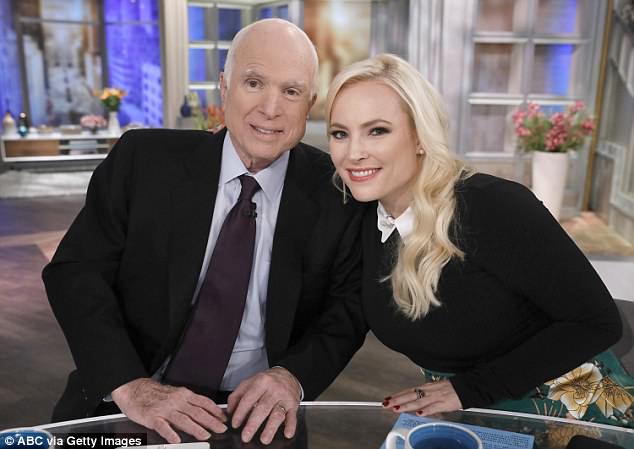 ‘The doctor said he would like hemorrhage and it can be dangerous if he still has air in his brain, and all this crazy stuff,’ Meghan said.

‘So I freaked out and I screamed at everyone that he couldn’t get on the plane and that I didn’t agree with it,’ she continued. ‘And my dad snapped at me and said, “It’s my life and it’s my choice.”‘

McCain did make the trip to DC, where he shocked his colleagues by voting no on the repeal, blocking something the Republicans had loudly promised for years.

Filmmaker Peter Kunhardt and his sons George and Teddy conceived of the new biographical film on the same day that McCain’s diagnosis with with glioblastoma, a very aggressive form of brain tumor, was made public last year.

The project moved extremely quickly and McCain agreed to sit with the Kunhardt team for six hours of interview. 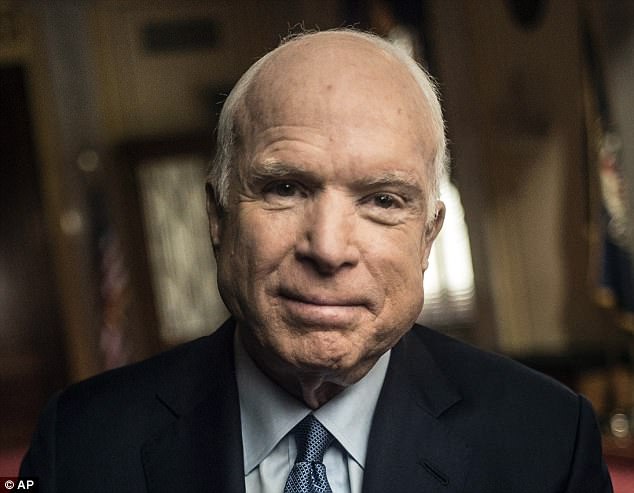 This image released by HBO shows Sen. John McCain, R-Ariz., who is the subject of the documentary “John McCain: From Whom the Bell Tolls,” debuting on Memorial Day on HBO

McCain left Washington in December and has yet to return, though he continues to weigh in on an array of issues.

Earlier this month, he urged his fellow senators to reject President Donald Trump’s nominee to lead the CIA.

A White House aide subsequently dismissed his opposition, saying it ‘doesn’t matter’ because ‘he’s dying anyway,’ setting off a firestorm of criticism and calls for a public apology.

Following an advance viewing of the HBO film on Capitol Hill, Sen. Amy Klobuchar, D-Minn., said she will always remember McCain interrupting a supporter in her home state to stick up for Barack Obama, his Democratic opponent in the 2008 presidential race.

The supporter had said she couldn’t trust Obama and called him an ‘Arab.’

McCain replied: ‘No, ma’am, no, ma’am. He’s a decent family man, a citizen that I just happen to have disagreements with on fundamental issues, and that’s what this campaign is all about.’ 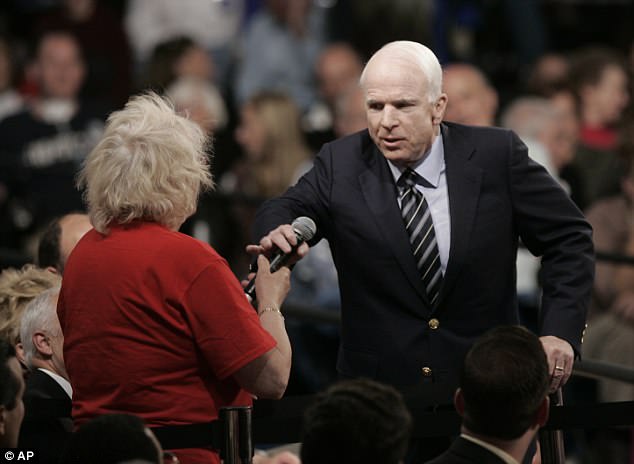 That scene made it into the movie, which was followed by praise from Obama, who said he admired McCain’s civility in an uphill battle.

‘For John, in the middle of that to say, ‘Hold on a second. We don’t demonize each other. We’re all Americans. We’re all on the same team,’ I thought was an indication of who John fundamentally was,’ Obama said.

Indeed, praise from Democrats was featured prominently in the film, including from former Vice President Joe Biden, previously a colleague of McCain’s in the Senate, and former Sen. Joe Lieberman.

Fewer appearances were made by Republican lawmakers. Trump, with whom he has feuded, is not interviewed, though Trump’s 2016 Democratic opponent, Hillary Clinton, was.

In another tidbit released prior to the film’s airing, McCain expresses regret for not picking Lieberman as his 2008 presidential running mate in place of Alaska Gov. Sarah Palin. He said advisers talked him out of it.

‘That was another mistake that I made,’ McCain said. 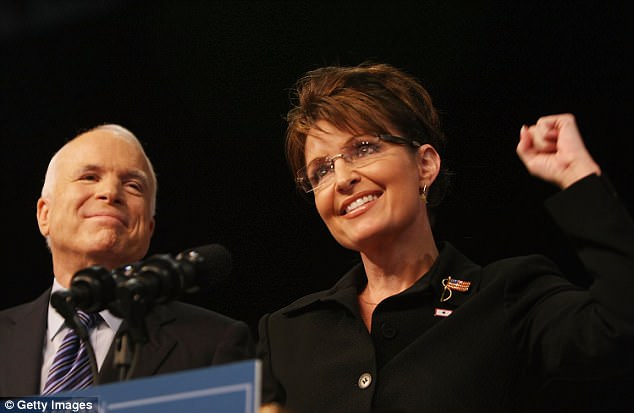 In another tidbit released prior to the film’s airing, McCain expresses regret for not picking Lieberman as his 2008 presidential running mate in place of Alaska Gov. Sarah Palin (above)

The film’s closing moments include McCain’s deciding vote against the GOP’s health care bill and his Senate speech before departing for Arizona.

As bells begin to toll, McCain gives a quick take on Washington: ‘We need to make sure we give the American people what they deserve, and right now they’re not getting it.’

And on his current circumstances: ‘I’m confident, I’m happy and I’m very grateful for the life I’ve been able to lead and I greet the future with great joy.’

In the speech, he blasted a ‘half-baked, spurious nationalism’ in the United States ‘cooked up by people who would rather find scapegoats than solve problems.’

John McCain: For Whom the Bell Tolls airs on HBO at 8pm ET on Monday.