Meghan McCain is still fuming over a New York Times op-ed that criticized her as being the ‘most polarizing and predictable figure’ on The View and noting that while she’s on it, ‘there’s not much to enjoy’ about the chat show.

On her way to Arizona Friday – her first trip back since her father’s 2018 death – the outspoken 35 year old tweeted: ‘Going home to the promised land of Sedona…. I’ll be back @TheView next week as usual. Thoughts and prayers to the @nytimes opinion for having to suffer through a conservative woman with a big platform’s problematic opinions.’

The tweet came one day after the New York Times ran an op-ed, titled ‘The View Has a Meghan McCain Problem,’ in which the author said that conservative McCain’s penchant for on-air arguments with her co-hosts is now ‘exhausting.’

Meghan McCain tweeted her ‘thoughts and prayers’ to the New York Times while traveling home to Arizona, a day after it ran an op-ed piece blasting her co-hosting gig on The View 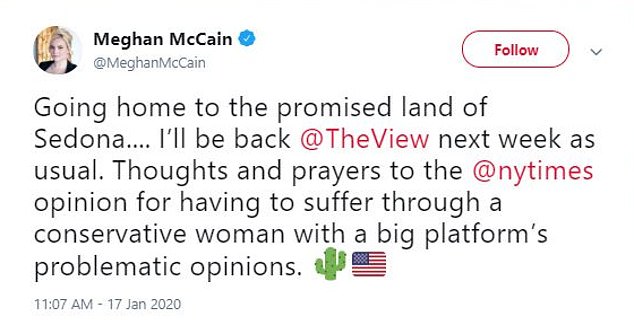 McCain sent this tweet after filming Friday’s episode of The View, before she traveled to her family home in Arizona for the weekend

Since McCain joined the show in 2017, ‘she’s become its most polarizing and predictable figure,’ the op-ed said, adding that ‘the conservative commentator’s on-air spats made for fun TV’ in the beginning, but that two years later, ‘it’s just exhausting.’

The Thursday op-ed went on to note that ‘It has become the norm to watch Ms. McCain, the daughter of Senator John McCain, square off against her co-hosts in a barrage of vehement exchanges — leveraging her political parentage, accusing her co-hosts of supporting infanticide, using her platform to push back against assault weapons bans and progressive immigration policy.’

‘The increasingly aggressive rejoinders by her co-hosts have escalated to the daytime TV equivalent of a cage fight for the viewing public, reflecting the frustrations of discourse in our current political climate under the magnifying glass of harsh studio lighting.’

The op-ed pointed out that the show’s habit of following up co-host on-air fights the day after, with the hosts claiming ‘that it’s all just a harmless debate among friends,’ results in the sparring coming off as ‘performative, no matter how genuine the sentiment.’ 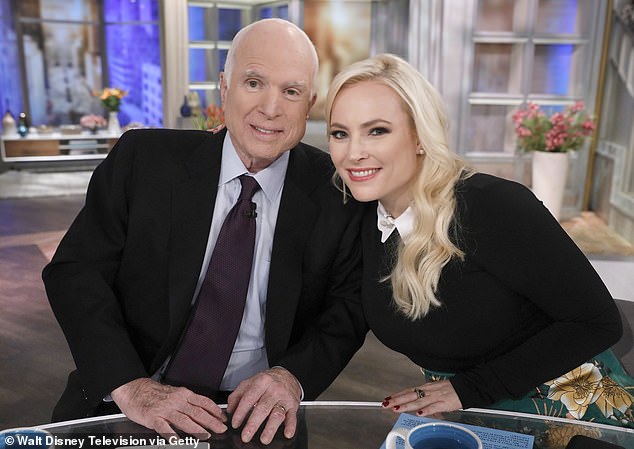 McCain, pictured with her father, Sen. John McCain, in October 2017 on the set of the view, shortly after she began her co-hosting gig 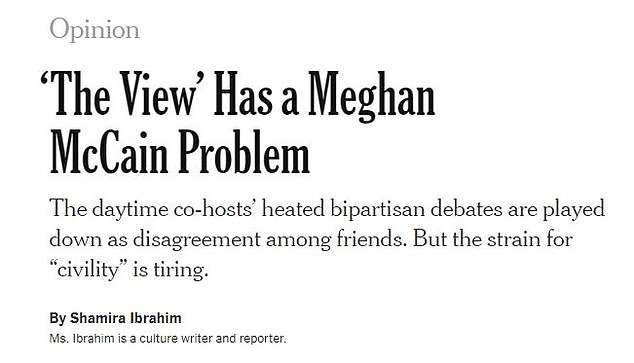 ‘This “agree to disagree” stance is frustrating,’ the op-ed noted, later adding that ‘nothing about these recent viral incidents is either civil or revelatory, no matter how many avowals are made to that effect.’

The op-ed wrapped up with a reference to series creator Barbara Walters’ episode-ending exhortation to ‘Have a great day, everyone, and take a little time to enjoy the view,’ by stating that ‘The problem is, with Ms. McCain still on the show, there’s not much to enjoy.’

After the op-ed was published, McCain was quick to take to Twitter with a pair of fiery responses.

‘.@nytimes⁩ – everyone already knows how much you despise red state, pro life, pro #2A conservative women, and wish we would all just go away,’ she tweeted Thursday.

McCain fired back with a pair of tweets, calling out the New York Times for its stance against conservatives. Megyn Kelly and Joe Scarborough also tweeted their support for McCain

She then tweeted: ‘If the @nytimes wants to understand the country, maybe they should try having one woman in the room who doesn’t accept their groupthink on guns, abortion, and religion. Apparently that’s too much for them.’

Unsurprisingly, conservatives were quick to back up McCain’s POV.

‘The hatred for conservative women by the “woke” is ever apparent and totally undermining to their demands that ppl take them seriously. So empathetic … unless you don’t think exactly as they do,’ former Fox News and NBC News host Megyn Kelly tweeted Thursday.

‘The View doesn’t have a @MeghanMcCain problem. The Left does. They don’t want to hear from any conservative, ever, no matter how socially libertarian or anti-Trump she is,’ political commentator Tiana Lowe tweeted.

‘What an embarrassing example of how the Left is becoming even more insular by the day. That is saying a lot,’ Scarborough tweeted, alongside a link to the op-ed.

‘The Left owns most of American popular culture. And yet the existence of one moderately conservative woman poses a threat to civil discourse. Good Lord. What a joke.’

He then tweeted that ‘The Left kissed up to John McCain every time he spoke truth to Trump but can’t handle his daughter speaking her own mind when it doesn’t fit neatly into a progressive world view? Open your mind.’

McCain told People that she is ‘really looking forward to having some much needed family time’ during her weekend trip to Arizona.

A source close to McCain told the magazine that following ‘a crazy and emotionally taxing week,’ McCain ‘feels the need to get out of the media bubble and remind herself of the people she represents on TV every day.’​