MEGHAN MCCAIN: Wow, Dems and the liberal media sure calmed down about White House document stashes

A round of applause for Democrats and their left-wing partisan watercarriers in the mainstream media.

You’ve outdone yourselves yet again!

In their mad dash to cover for President Joe Biden amid his exploding classified document scandal, they’ve managed to do 180-degree turns on nearly every major position they’ve taken over the last few months.

When President Donald Trump was found to be storing sensitive materials at Mar-a-Lago, he was a threat to national security, an obvious criminal and not fit to ever again hold high office.

But now that Biden has done something similar, they’re singing a different tune. I know that I shouldn’t be surprised, but these verbal gymnastics are too daring, the logical contortions too painful to ignore.

Where do I even begin?

Recall the term ‘fake news’ popularized by you-know-who. The left-wing punditry is bringing it back.

My former co-host on ‘The View’ Joy Behar declared, ‘You know what I think? I’ve never seen a luckier person than Donald Trump. Just as we’re this close to getting him, somehow these documents appear!’

My former co-host on ‘The View’ Joy Behar declared, ‘You know what I think? I’ve never seen a luckier person than Donald Trump. Just as we’re this close to getting him, somehow these documents appear!’

We know how the documents appeared. The White House said Biden’s personal attorney found them.

But thanks for participating.

Democratic Congressman Hank Johnson (D-GA) went even further. He speculated the documents could have been part of an elaborate conspiracy to frame the president.

By all means, investigate the investigation. But first, Mr. Congressman, ask yourself this question: Who would have the means and foresight to steal top-secret documents from the White House, secretly stash them next in Biden’s office and Wilmington home, only for them to discovered years later?

Is there a cabal of time-traveling Republican ninja operatives on the loose?

By applying Occam’s razor to this mystery, I deduce that Biden probably just screwed up – whether there was a criminal intent behind that screw-up is to be determined.

The Democratic back-bending didn’t stop there. 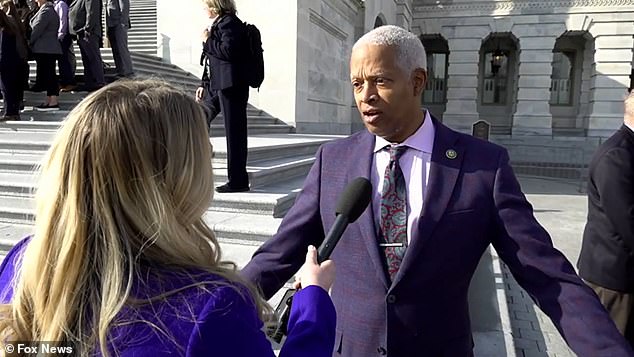 Democratic Congressman Hank Johnson (D-GA) went even further. He speculated the documents could have been part of an elaborate conspiracy to frame the president.

After Trump’s illicit library was uncovered, Congresswoman Pramila Jayapal (D-WA) cranked it up to 11.

‘Donald Trump stole classified documents. He put not only our national security at risk, but the security and safety of our allies around the world. He must be held accountable to the full extent of the law,’ she tweeted.

Can you guess what she said of Biden’s personal stash?

‘Certainly, there’s a political problem for all of us as Democrats, but I do think that there are significant differences, and I do think it’s important to look at the fact that this president is cooperating completely with the investigation,’ she told CNN.

She sure seems to have calmed down.

After Mar-a-Lago was raided by the FBI, Democrats demanded to know who had been there and when. That’s not unreasonable considering classified documents were in the building.

So, what does the Biden White House say about releasing the visitor logs to Biden’s Wilmington home?

White House press secretary Karine Jean-Pierre just dodged the question in a very cringe-worthy moment – and that’s saying a lot when it comes to KJP.

Biden himself went on ’60 Minutes’ and shamed Trump for taking material from the White House.

‘How that could possibly happen, how anyone could be that irresponsible,’ Biden tsk-tsked. ‘I thought what data was in there that may compromise sources and methods… just totally irresponsible.’

OK, Joe. What do you have to say for yourself now? 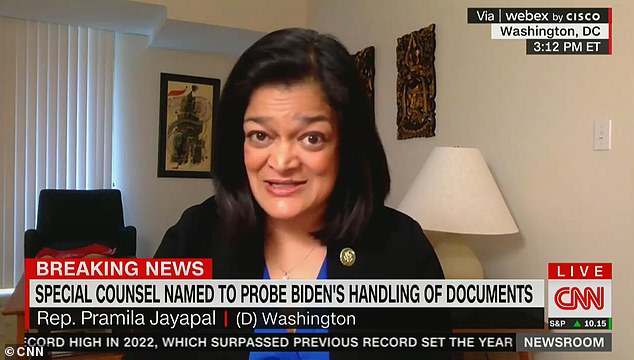 ‘Certainly, there’s a political problem for all of us as Democrats,’ Jayapal told CNN. She sure seems to have calmed down.

‘My Corvette’s in a locked garage,’ Biden said Thursday in a brief ad-lib, as he read a canned answer to shouting reporters. ‘So, it’s not like it’s sitting on the street.’

Oh, in that case: Call off the search!

The list goes on and on but let me conclude with this whopper.

At the very start of the Biden administration, they pledged to be the most transparent White House in modern American history. Obviously, they’ve fallen short of that, as I’ve written before.

In this case, the White House insists that the one thing that distinguishes Biden’s document debacle from Trump’s is that Biden has been totally above board and has cooperated with the Justice Department from the get-go.

That too is not the case.

Documents were first discovered at Biden’s personal, private office in Washington, DC on November 2nd about a week before the 2022 midterms.

The White House didn’t publicly reveal the discovery until January 9th nearly two months later and only after it was reported in the media.

How’s that for transparency? 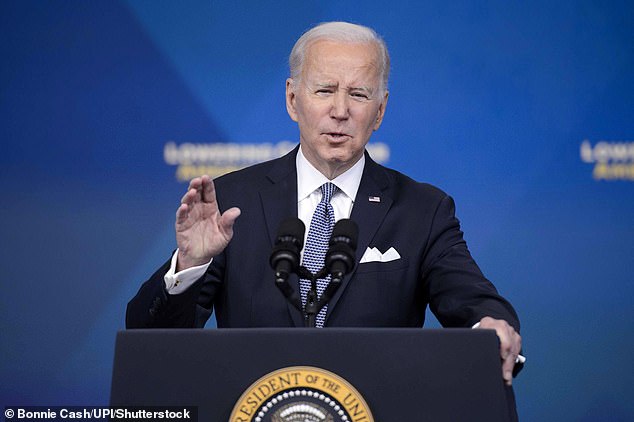 Biden himself went on ’60 Minutes’ and shamed Trump for taking material from the White House.

And then there’s this, reporting that a major driving factor behind Attorney General Merrick Garland’s decision to appoint an independent investigator to look into this fiasco was that White House statements were misleading and ‘created the impression that Biden’s team had something to hide.’

The American people are used to the egregious double standards, but the saddest part is that the left-wing partisan media and politicians just don’t seem to care. All their bloviating about honesty and the fraying of democracy is a load of hot air.

We see many Americans moving away from traditional media and politicans toward independent outlets and unorthodox leaders and this is exactly why.

We are all hurt by this. The distrust of our institutions is arguably America’s biggest domestic threat. If the left truly cared about the health of our democracy, they’d start admitting the obvious, because they’re not fooling anyone.