The Duchess of Sussex has renewed calls for compulsory paid family leave in America, in her first major TV appearance since her notorious tell-all with Oprah Winfrey.

Meghan Markle told close friend and chat show host Ellen DeGeneres on Thursday that she would do ‘everything that I can’ to make paid family leave law for all Americans.

The duchess recently stepped outside of royal protocol with a letter to US Congress asking them to consider making the proposal compulsory. However, she has come under fire for calling Republican senators and using her royal title to urge them to vote in favour of paid leave.

Republican Representative Jason Smith of Missouri, who has previously condemned Meghan for interference in American politics, even suggested she should be stripped of her title to stop her using it to gain political leverage.

Meghan told The Ellen Show: ‘I think that people truly forget, or don’t even know that in this country, it’s one of the only six countries in the entire world and the only wealthy nation in the entire world that does not mandate and have a federal paid leave programme.

‘Everybody knows, especially if you have had a child and even if you haven’t, you know how hard it is and how critical it is in those first few weeks if not months to be together as a family.

‘And the fact that we don’t offer that here is something that now as a mom of two, I will do everything that I can to make sure that we can implement that for people.’

Meghan, a former Suits actress who is living in a $14million mansion in California with husband Prince Harry and their children Archie and Lilibet, also promoted her children’s book The Bench, which she said she wrote as a poem for Harry on Father’s Day. 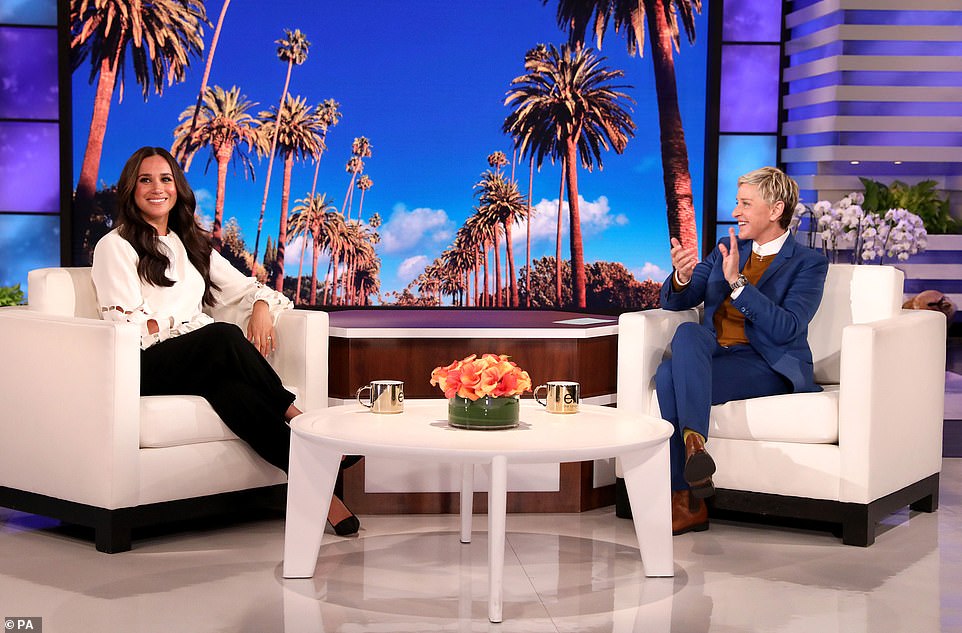 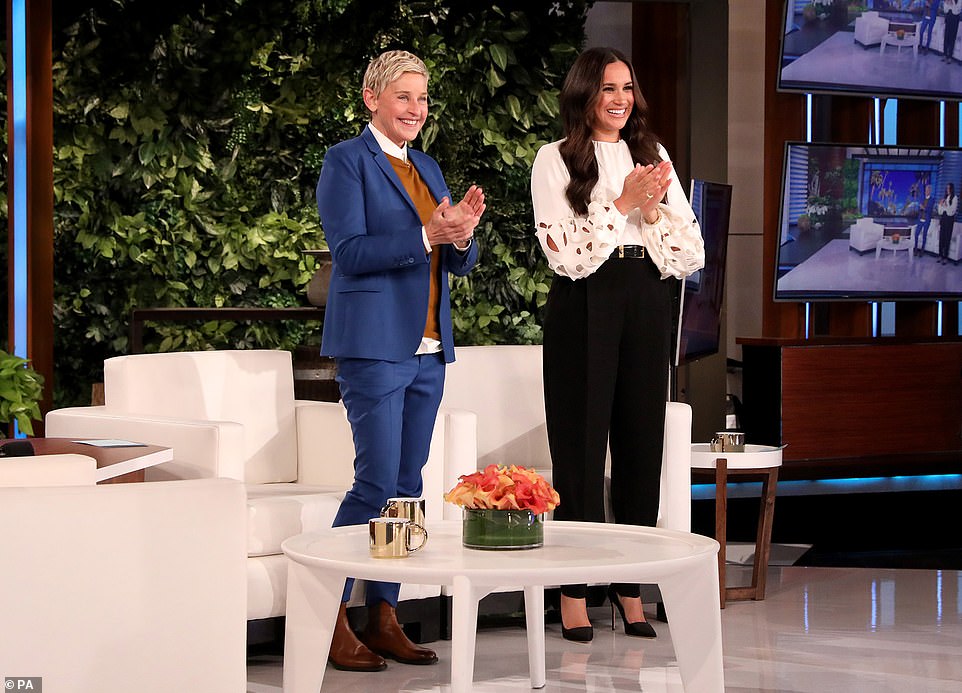 Meghan and DeGeneres looking at the audience during a taping at the Warner Bros lot in Burbank, California 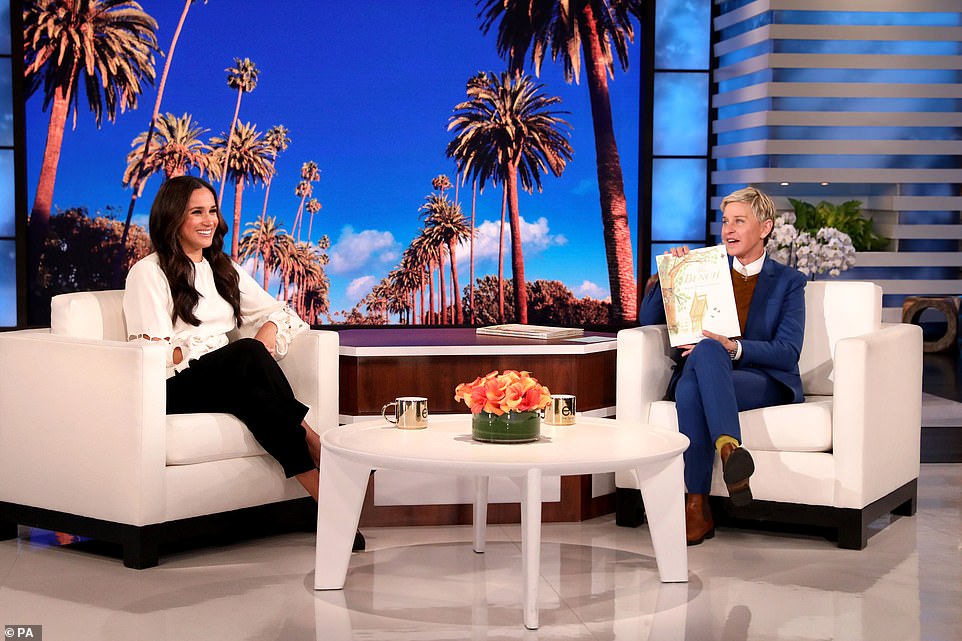 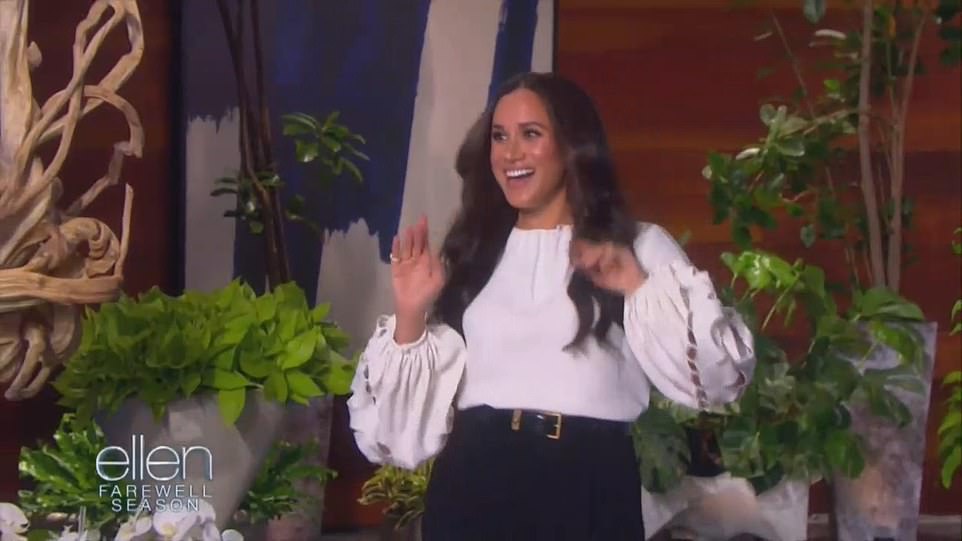 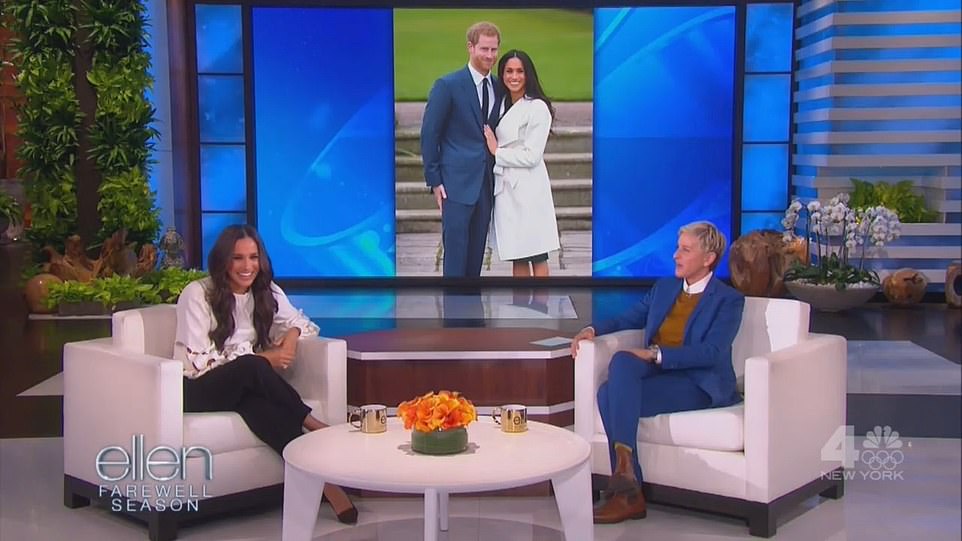 Meghan and close friend DeGeneres on the Warner Bros lot, with a photo behind them showing Meghan and Prince Harry as the royal couple announced their engagement to the world

The duchess revealed how son Archie dressed as a dinosaur for Halloween, while her five-month daughter Lili was a ‘little skunk like Flower from Bambi’.

Meghan spoke of how she spent the celebration with chat show host DeGeneres and her wife, actress Portia de Rossi – her neighbours in the celebrity enclave of Montecito in California.

But Meghan said two year-old Archie and his baby sister were ‘not into’ Halloween at all, with Archie only staying in his costume for less than five minutes.

Meghan and Harry have until now remained incredibly private about Lili, who was born in June and was named Lilibet after the royal family’s nickname for the Queen.

They are yet to share a photo publicly of their daughter.

During the interview on The Ellen DeGeneres Show, Meghan also talked about how Lili was teething, saying ‘Anything to relieve that’, before DeGeneres jokingly suggested tequila.

Clips released ahead of the interview on Thursday showed the duchess in a lighthearted mood as she opened up about her children.

Meghan said: ‘We were home and we saw you guys, which was great.

‘But no, we wanted to do something fun for the kids and then the kids were just not into it at all.

DeGeneres told how Harry persuaded Archie to put his dinosaur costume on, saying: ‘Finally Harry talked him into putting the head on. But Lili was a skunk… it was so cute.’

Meghan replied: ‘She was a little skunk. Like Flower from Bambi.’ 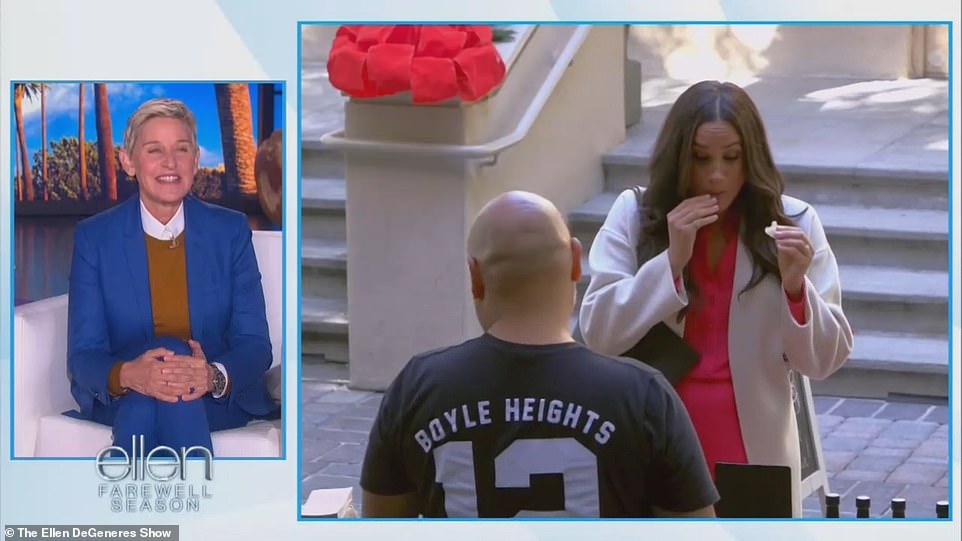 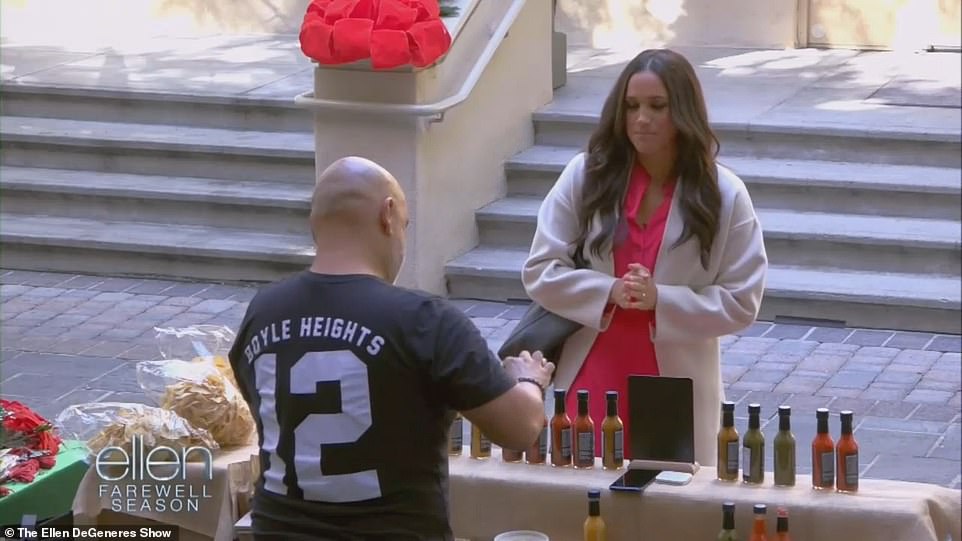 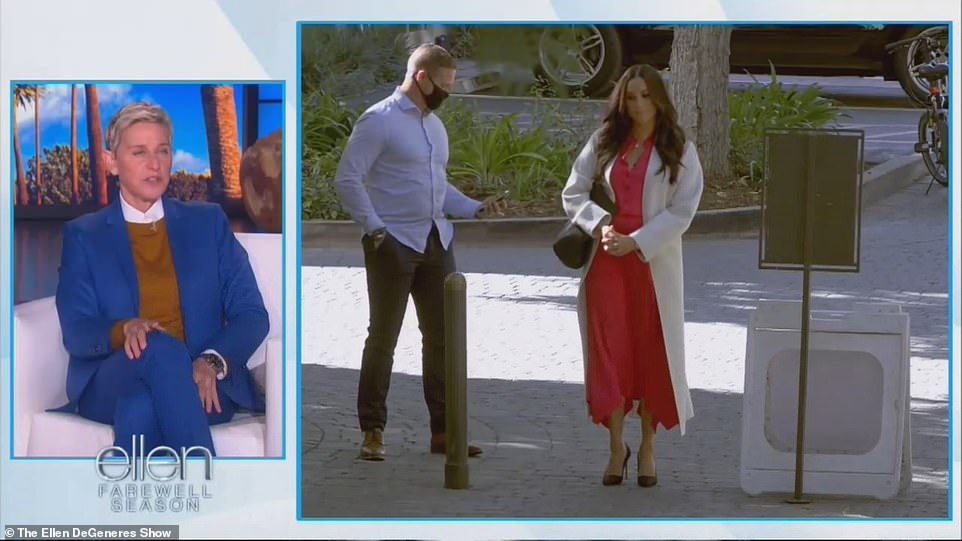 Meghan approached a food vendor as part of the prank. She ate a nacho like a chipmunk and then asked for something even hotter. She then tried the hottest and sings ‘feeling hot hot hot’

The duchess also revealed how she and Harry once went to a post-apocalypse themed Halloween party disguised in costumes when they were dating to have ‘one final night on the town’ before it was revealed they were a couple.

They were joined by Harry’s cousin Princess Eugenie and her now husband Jack Brooksbank who were visiting them in Toronto, Canada.

‘The four of us snuck out in Halloween costumes to just have one fun night on the town before it was out in the world that we were a couple,’ Meghan said.

She added: ‘It was a post-apocalypse theme. So we had all this very bizarre costuming on and we were able to just sort of have one final fun night out.’

The news broke that they were a couple at the end of October in 2016.

The duchess also promoted her children’s book The Bench, which she said she wrote as a poem for Harry on Father’s Day.

‘It was about my observation of him and him being a dad, which was the most beautiful thing to watch,’ she said.

DeGeneres asked: ‘Does Archie know he’s in here? Does he know that’s him and what does he think of the book?’

Meghan replied: ‘He does. On that first page that you open and you see our dogs, he goes, ‘That’s Pula. That’s Guy’.’

The Sussexes have a black Labrador named Pula and a beagle called Guy.

Meghan is also said to have spoken of her and Harry’s happy new life in the US.

The pair quit as senior working royals in 2020 in a bid for personal and financial freedom, and have since signed multi-million pound deals with Netflix and Spotify.

DeGeneres first met Meghan by chance at an animal shelter some years ago and encouraged her to adopt her first dog, Bogart.

She has previously described the Sussexes as ‘the cutest couple, so down to earth’ and defended them when they faced criticism after taking a run of flights on private jets.