Meghan Markle’s bid for UK citizenship could be scuppered by her and Prince Harry spending large amounts of time in Canada, immigration lawyers warn the royal pair

Meghan Markle’s bid for UK citizenship could be scuppered by her and Prince Harry spending large amounts of time in Canada, immigration lawyers have warned the royals.

The Duchess of Sussex started the process of obtaining a British passport after marrying Harry in May, 2018, but there are rules over how much time she must spend in the UK.

While waiting to be granted indefinite leave to remain – which normally takes five years – lawyers usually advise that clients spend most of their time in the country, that means more than six months.

Philip Trott, an immigration lawyer and partner with Bates Wells, told The Times Meghan can apply when not in the country, ‘there is no harm in being out, as long as you spend most of your time here,’ he said.

The Duchess of Sussex started the process of obtaining a British passport after marrying Harry in May, 2018 (pictured: Prince Harry, Duke of Sussex and Meghan, Duchess of Sussex attend a Creative Industries and Business Reception on October 2, 2019 in Johannesburg, South Africa)

He added: ‘The advice we normally give to clients is that most of your time means six months and one day every year.’

On Monday, the Queen confirmed that Meghan and Harry would have a ‘period of transition’ and spend time between the UK and Canada.

The extraordinary summit at Sandringham with Princes Harry, Charles and William came after the Sussexes announced they wanted to lead independent lives.

But on this side of the Atlantic, when she applies for naturalisation Meghan must pass a further test which says in the last three years she shouldn’t have spent more than 270 out of the country.

Taking the Sussexes phrase literally that they will ‘balance our time’ between the Britain and Canada, this would add up to 540 days over a three year period. 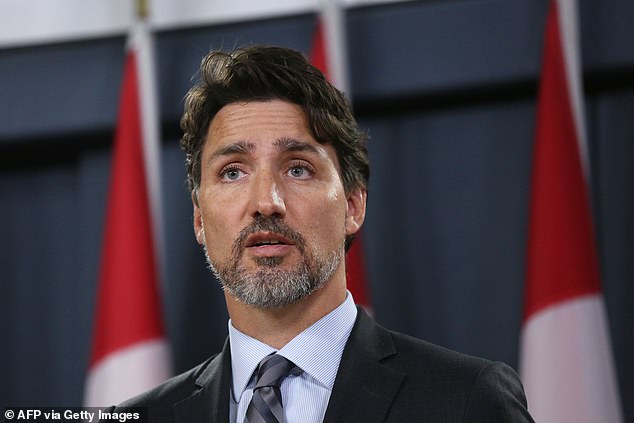 However, Mr Trott told The Times that there is a ‘general discretion’ to allow for absences exceeding the 270 days.

He believes it would probably be waived in this case.

A spokeswoman for the duchess told the paper: ‘There is no change in the fact that she is pursuing the path to British citizenship.’