Exquisitely hand-crafted from an original French recipe dating back to 1862, they were the crowning feature on a table of sweet treats fit for a queen – or at the very least a heavily-pregnant duchess.

While the five-day, £350,000 extravaganza – culminating in a party inside America’s most expensive hotel suite at The Mark in Manhattan – made headlines around the world, The Mail on Sunday can today reveal just how opulent Wednesday’s celebratory banquet really was.

It was so lavish, in fact, that Ladurée’s website boasts of how its signature macaron towers ‘evoke the Parisian glamour and elegance that Marie Antoinette would approve of’.

The Duchess of Sussex is unlikely to welcome comparisons to the 18th Century French queen who, when told that her subjects were starving and had no bread, replied: ‘Let them eat cake.’

But the scale and grandeur of the table which greeted famously sweet-toothed Meghan and up to 20 guests was staggering.

Central were the four macaron towers, costing a total of £350 and infused with the delicate flavours of rose petals, passion fruit, vanilla and pistachio.

Made from organic almond flour, eggs and sugar, each delicate macaron is handmade using two outer shells with a piped ganache filling.

They contain an average of 80 calories each and are gluten-free – and should not be confused with a a traditional British macaroon made with coconut and almonds. 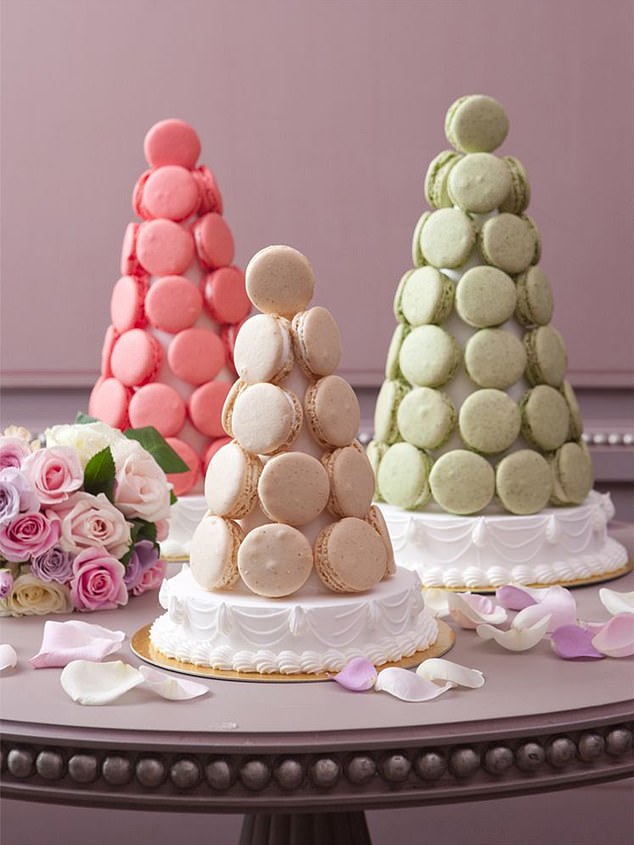 Meghan was spotted on a visit there with her fashion stylist friend Jessica Mulroney last Saturday.

Those fortunate enough to be invited to Wednesday afternoon’s soiree in the £57,000-a-night penthouse at The Mark have revealed charming photographs of iced-biscuits in the shape of storks, bunnies and baby rattles. 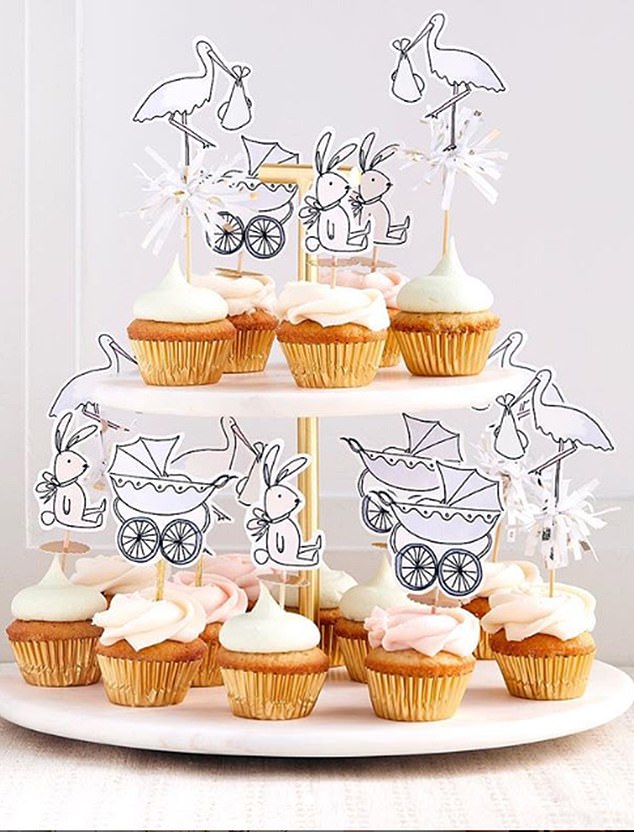 With an even-handed mix of pinks and blues on show, there was nothing in the flowers or decorations at Meghan’s extraordinary baby shower to indicate the sex of the child she is carrying.

The Duchess of Sussex has previously said that she does not want to know the baby’s gender and last night a Kensington Palace spokesman stressed this was still the case.

Intriguingly, however, a source close to one of those attending the party said that Meghan was telling guests her baby will be a boy. ‘She was talking openly about it,’ said the source. 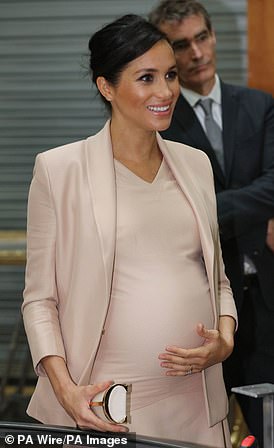 According to the source, Meghan is determined to break from the idea of ‘pink for a girl, blue for a boy’

But if that really proves to be correct, don’t expect Sussex Junior’s nursery to be decorated in blue or filled with toy trains and trucks, as has long been traditional for a boy.

Because the same source believes it likely that the Royal baby will be raised in a ‘genderless’ fashion.

According to the source, Meghan is determined to break from the idea of ‘pink for a girl, blue for a boy’, believing it to be old-fashioned. Instead, Meghan will take a ‘fluid’ approach to the child’s upbringing.

The Duchess will choose gender-neutral colours such as grey for the child, whether it’s a girl or a boy, said the source – following the trend set by politically aware circles in her home state, California.

The picture showed a gold-rimmed plate with a pale green baby rattle pop cake, a cupcake with a stencilled pram decoration and a biscuit in the shape of a stork carrying a baby.

But The Mail on Sunday can today reveal that Meghan, radiant in a white-spotted navy blue maternity dress, had far more than designer biscuits to choose from.

In addition to the macaron towers, there was more drama in the cakes and confectionery thought to have been made by Michelin-starred chef Jean-Georges Vongerichten, whose eponymous restaurant at The Mark is considered one of the finest in New York.

Meghan, 37, who is around seven-and-a-half months pregnant, is a self-confessed foodie and while guests including her former Suits co-star Abigail Spencer, Ms Mulroney, hairdresser Serge Normant and designer Misha Nonoo were serenaded by harpist Erin Hill, the food was the real star.

Health-conscious Meghan insisted on items being marked ‘gluten free’ for those with dietary constraints.

There were also cotton candy pom poms (candy floss on sticks) – explaining the delivery of a candy floss machine to the hotel during a snow storm on the eve of the party – and a jar of multi-coloured ‘donut holes’ that were gluten-free and just 40 calories each.

Sources said Ms Williams’ designer biscuits, including iced storks on lollipop sticks, trays of sweet bunnies with chocolate piping and biscuits in the shape of traditional English prams in blue icing, were a hit.

The colour scheme featured multiple hues of blues, pinks, yellows and greens and gave no hint as to the gender of the future Baby Sussex. ‘It was a delicious palate of colours and a very sophisticated table,’ a source said.

‘There was no dominant colour theme. It was just opulent, luxurious and completely over the top.’ Cupcakes topped with yellow and orange piped flowers (130 calories each) sat beside mini lemon meringue pies (325 calories) and pink meringues (100 calories). 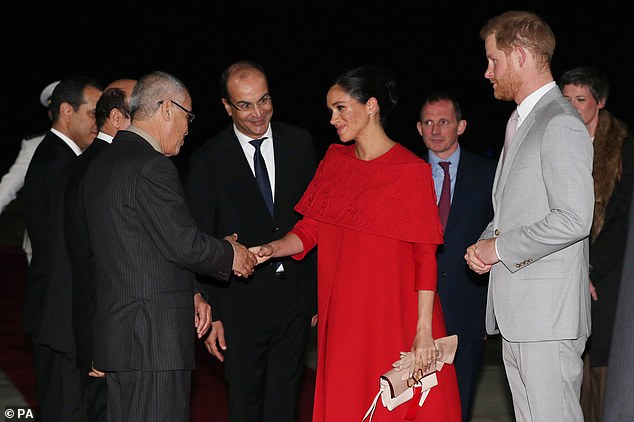 The Duke and Duchess of Sussex are welcomed by officials on their arrival at Casablanca airport, for their tour of Morocco

The four macaron towers sat on white royal icing bases and the banquet featured a spectacular white ‘pop cake’ pyramid decorated with hand-crafted pink paper flowers that, according to one observer, ‘looked almost too good to eat’.

Drinks ranged from vintage champagne to designer teas and £12 bottles of water.

The official baby shower cake was a two-tier white fondant confection decorated with paper figures of Meghan, Harry and a pram positioned in front of cut-out paper cherry blossom trees.

The official baby shower cake was a two-tier white fondant confection decorated with paper figures of Meghan, Harry and a pram positioned in front of cut-out paper cherry blossom trees

Meghan, 37, is around seven-and-a-half months pregnant

One Los Angeles-based private chef who works for A-list celebrities said: ‘If you look at the ingredients alone, then you’d probably be looking at two to three grand, but when you factor in The Mark hotel and Jean-Georges, then the sky is the limit. If I was to put a figure on an event like this, in a location like that, I’d say ten to 20 grand.’

There have been suggestions that the New York bash was used by Meghan to wrest back control of her own image. It certainly drew huge media attention with scores of photographers camped behind barriers outside the hotel.

The duchess arrived in New York on February 15. The following day she had dinner with Ms Williams, Ms Mulroney and close friend Markus Anderson.

Guests arrived at the baby shower with gifts including a £326 Babyletto crib and a £470 Trek bicycle.

Flowers were provided by a company called Lady Fleur and Meghan later donated the arrangements to charities. However, the fate of any left-over food is unknown. The LA chef said: ‘It’s doubtful that number of guests could possibly have consumed that amount of food.

‘It would be nice to think that someone somewhere might be enjoying a rose-petal flavoured French macaron.’