Meghan’s father prepares for lonely Christmas at his Mexican hideaway

Thomas Markle Sr. is preparing for Christmas without his rift from his daughter Meghan being fixed – alone at his Mexican home while she prepares to celebrate with her new in-laws.

The Duchess of Sussex and her father have not spoken since before her wedding to Prince Harry in May, when he was revealed to have staged paparazzi photographs.

Markle Sr., 74, was exclusively photographed by DailyMail.com in Rosarito, just across the Mexican border from San Diego, California, tidying his car outside his seafront home.

In contrast, his daughter, 37, who is pregnant with her first child, is spending Christmas at the Queen’s country home, Sandringham, in Norfolk, with her new husband Prince Harry and his relatives for a holiday steeped in royal tradition.

Christmas without Meghan: Thomas Markle Jr. spent the run-up to the holiday at his Rosarito, Mexico, home. He and his daughter last spoke before he was revealed to have staged paparazzi pictures 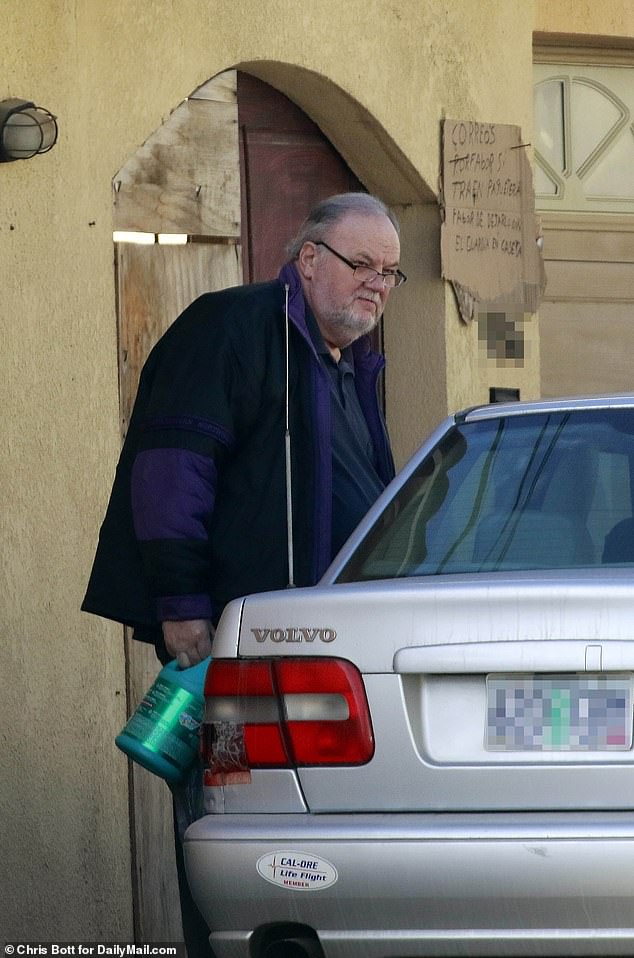 Saddest holiday: Both Thomas Markle Sr.’s other children have begged Meghan to speak to her father – although they too will not be spending Christmas with him 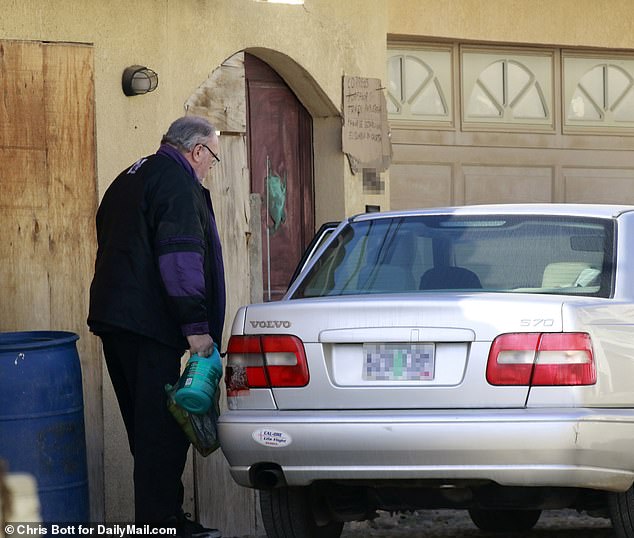 Tidy time: Thomas Markle Sr. was seen . The sign beside his door says that packages should be left with security at the entrance to his development, which sits on cliffs overlooking the Pacific Ocean 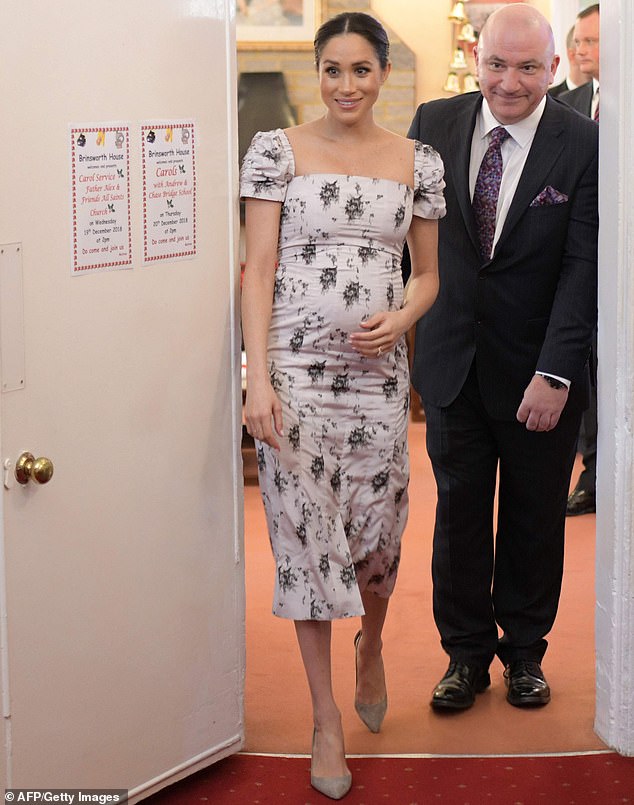 Christmas without her father: Meghan Markle, the Duchess of Sussex, has not spoken to her father since before her wedding in May. Now pregnant with her first child, she was seen earlier this month visiting the Royal Variety Charity’s residential nursing and care home in Twickenham, south-west London 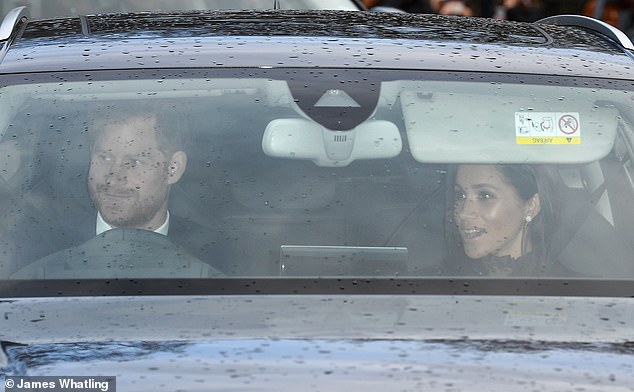 Together for the holidays: The Duke and Duchess of Sussex were seen last week attending the Queen’s pre-Christmas lunch at Buckingham Palace, and will spend Christmas with her at Sandringham, her country home 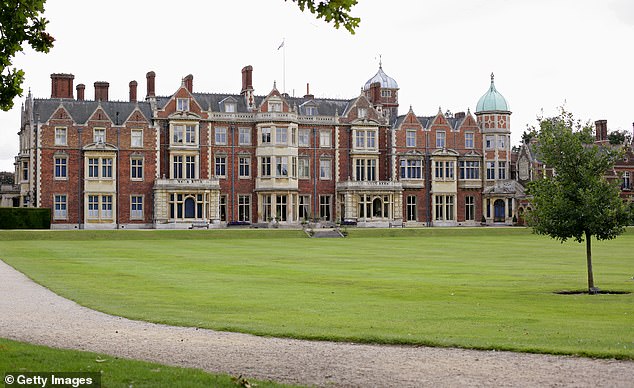 Here again: Meghan will spend her second Christmas at Sandringham House, in Norfolk, where the royals have been enjoying the Yuletide every year since 1888

The two are now separated by more than 5,500 miles, but also by a rift which Thomas Markle’s other two children, Thomas Jr. and Samantha, have urged her to end.

Both siblings have sent Christmas cards to their sister, pleading with her to make peace with her family over the festive season.

And her father used two interviews to try to reach out to his daughter, telling Piers Morgan on Good Morning Britain earlier this month that he had been ‘ghosted’ and asking for the Queen to help him be reconciled to his daughter.

The 74-year-old, who last spoke to the Duchess of Sussex on the eve of her wedding in May, claimed he sends her text messages ‘every day’ and has also sent letters to Kensington Palace, currently the home of the couple before they move out early next year.

He said: ‘I’ve been ghosted. I’m not sure why it’s happening. I love my daughter very much. I wish she would reach out, send me a text, anything. There has to be a place for me. I’m her father’.

And in a message of reconciliation for his estranged daughter, who is believed to be around five months pregnant, Markle Sr. stared down the camera and said: ‘I love you very much. I would like to hear from you. Whatever difficulties we’ve had I hope we can work through them. We’re family.’

He said of the Queen, his daughter’s grandmother-in-law: ‘I would be grateful for anything she can do.

‘I would think she would want to resolve any family problems. All families, royal or not, need to be together, especially in the holidays.’

He may find some encouragement in the Queen’s annual Christmas message which is broadcast in the UK and around the world and sees her speaking from Sandringham.

This year she will say: ‘Even with the most deeply held differences, treating the other person with respect and as a fellow human being is always a good first step towards greater understanding.’

The message is understood to refer to Britain’s  troubled political landscape and division over Brexit, the process of the country leaving the European Union, but appear likely to be well received by Meghan’s father.

In his interview with Piers Morgan, he had said the rift ‘can’t continue forever’ and he would keep trying to connect with his daughter.

He went on: ‘I don’t plan to be silent for the rest of my life. I love my daughter very much and she has to know that, and I would really appreciate if she would call me, just reach out to me.

Meghan’s father had earlier told the Mail on Sunday that he planned to spend Christmas quietly, marking the day by handing out presents at the Mexican border with the United States to underprivileged children. 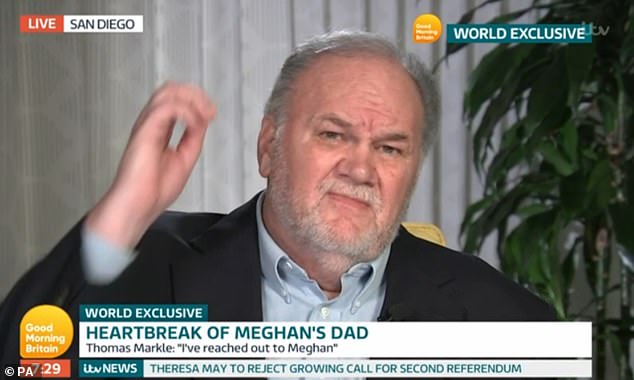 Plea: Thomas Markle used an interview with Good Morning Britain earlier this month to plead with his daughter for a reconciliation 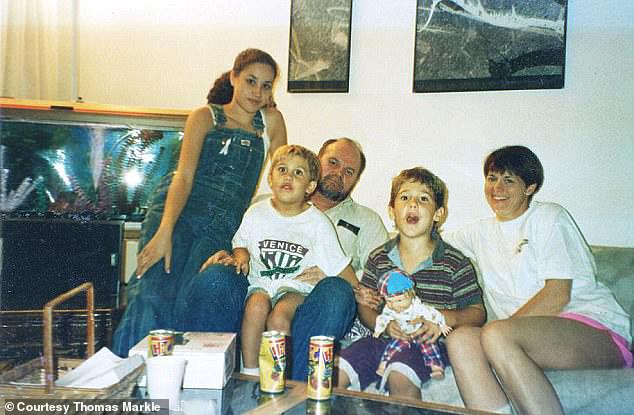 Ghosts of Christmas past: The Markle family have told of spending holidays together in the 1980s and 1990s – such as this year when Meghan and her father posed with Thomas Jr’s then wife Tracy Dooley and her nephews Tyler (left) and Thomas (right) 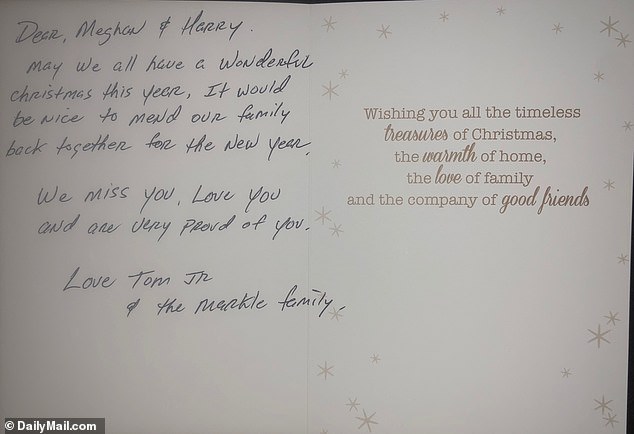 In a heartfelt card to the duchess revealed by DailyMailTV, Thomas Markle Jr expressed a wish to ‘mend our family back together for the New Year.’

Another message: Samantha Markle sent her sister the Duchess of Sussex a Christmas card begging her to ‘end the rift’ with her estranged father Thomas ‘in his last years’ 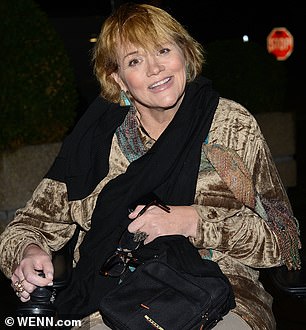 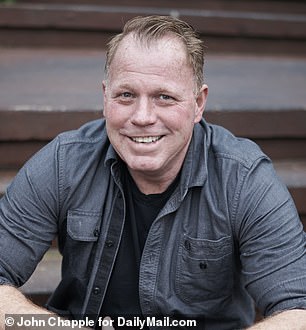 Siblings: Samantha Markle (left) and Thomas Markle Jr. (right) both pleaded with their sister to reconcile with their father for Christmas

In contrast his daughter will be surrounded by the royal family for the second year in a row in a traditional – and highly timetabled – Christmas.

She will be expected to attend the Christmas morning service at St Mary Magdalene in Sandringham.

Last year she walked out hand in hand with her then fiancé Prince Harry, the Duke and Duchess of Cambridge.

This year the two women’s body language will be closely scrutinized amid reports of tensions with the Duchess of Cambridge both before and after her wedding to Prince Harry.

Since the two women were last seen in public together reports have emerged of arguments, tensions and difference.

Meghan was claimed to have left Kate in tears during a fitting for Princess Charlotte’s bridesmaid dress, while one source told the Mail on Sunday: ‘Kate and Meghan are very different people. They don’t really get on.’

By early next year the two women and their husbands will no longer be neighbors at Kensington Palace in west London, with Meghan and Harry instead moving to Frogmore Cottage in Windsor, where they are expected to welcome their first child in April.

The two brothers will also not be spending Christmas under the same roof, with Prince William and his family coming to Sandringham from their nearby home, Anmer Hall, for the celebrations. 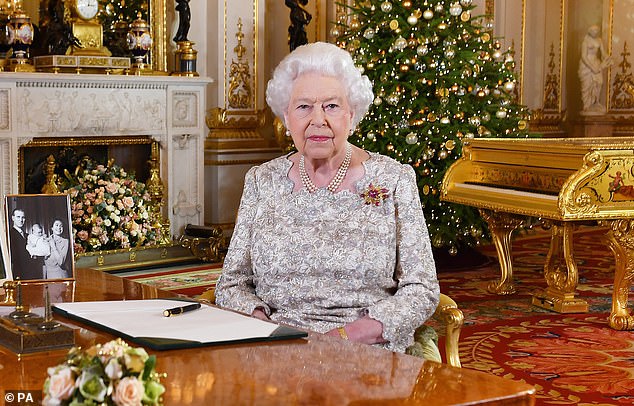 Are you listening Meghan? The Queen’s message from Sandringham will this year focus on reconciliation, a message the Duchess of Sussex’s father may welcome but which is understood to be prompted by the political fallout from Brexit 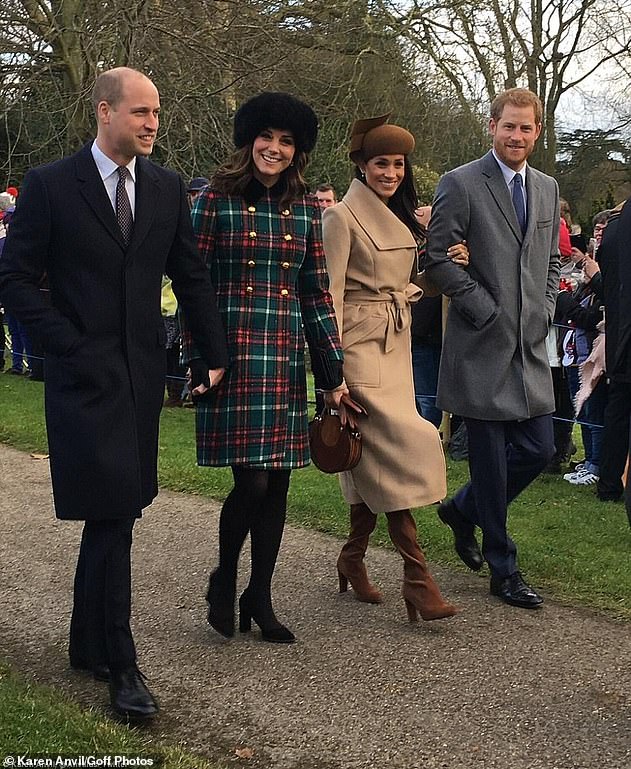 The way they were:  Meghan Markle, then Prince Harry’s fianceé, spent her first Christmas at Sandringham in 2017, walking to church with Prince Harry and the Duke and Duchess of Cambridge. This year the two women’s body language will be carefully watched for evidence of tension

During the day Meghan will be expected to take part in party games along with other members of the royal family and sit down for a Christmas dinner where the seating plan will be carefully organized to avoid any tensions surfacing.

On Wednesday – a national holiday in the UK known as Boxing Day – much of the royal family will go hunting.

Prince Harry will be watched carefully amid claims that he had agreed not to hunt because of his wife’s opposition to the sport.

One fact known in advance of the royal Christmas is that Meghan’s mother, Doria Ragland, will not be there.

She has turned down an invitation to join the royal family which was issued after she bonded with both the Queen and Prince Charles at her daughter’s wedding, where she was the only family member present from Meghan’s side.

Instead the yoga teacher and social worker is expected to spend the holiday with friends in Los Angeles.

She and Meghan remain close and there has been speculation that she will spend significantly more time in the UK when she becomes a grandmother for the first time.

Thomas Markle Sr. is already a grandfather of five, all of them grown up.

His son Thomas Jr. has two children with his ex-wife Tracy Dooley – Thomas and Tyler Dooley – but is estranged himself from both of them.

And Samantha is twice-divorced, with three children – daughters Ashleigh Hale, 32, and Noelle Rasmussen, 19, and son Christopher Hale, 33. She is known to be estranged from Noelle, who lives with her grandmother Roslyn, Thomas Markle Sr.’s first wife.