Meghan’s look for Wills that says I’m part of the family!

By Rebecca English For Daily Mail

She’s known to be rather more demonstrative than most members of the Royal Family, preferring a hug to a handshake.

And it seems the Meghan Markle effect may be rubbing off on her soon-to-be in-laws.

The actress and Prince William were seen exchanging an affectionate greeting yesterday as they arrived at the Anzac Day ceremony at Westminster Abbey.

Each gave the other a warm kiss on the cheek, with the prince then resting his hand on Meghan’s shoulder while she placed hers on his back as they shared a conversation, showing she has been firmly accepted into the family fold.

The fond public greeting between the two came as William returned to royal duties following the birth of his third child on Monday. 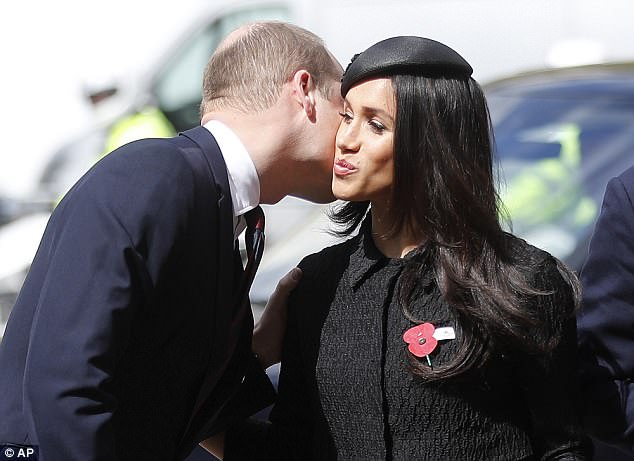 Asked how his wife Kate and the baby boy were, William replied: ‘They’re very well thanks … Sleeping’s going reasonably well so far, so he’s behaving himself, which is good news.’ At the ceremony to commemorate Australia and New Zealand’s serving military, war dead and veterans, Meghan, 36, wore a bespoke mid-length black skirt and jacket by Emilia Wickstead.

The designer is a favourite of the Duchess of Cambridge, demonstrating how Meghan is upping her royal style game. She matched the outfit with a chic black hat and Jimmy Choo clutch bag. Earlier in the day she had joined Prince Harry at a dawn remembrance service where she took part in a traditional Maori greeting.

The bride-to-be rubbed noses with a Maori woman to exchange a ‘breath of life’ in the ‘hongi’ greeting. It is a quintessential aspect of New Zealand’s culture and anyone approached to participate in the sacred gesture should always accept. Most members of the Royal Family have done it, including Harry – meaning he may have been able to offer his fiancee some tips.

The service was held at the New Zealand War Memorial beside Wellington Arch in central London on the 103rd anniversary of the ill-fated Gallipoli campaign.

After the main ceremony Harry, 33, and Meghan signed a book of commemoration, the first time Meghan has done so. It may be the only time we see her elegant signature as ‘Meghan Markle’, as she is likely to be made a duchess by the Queen. 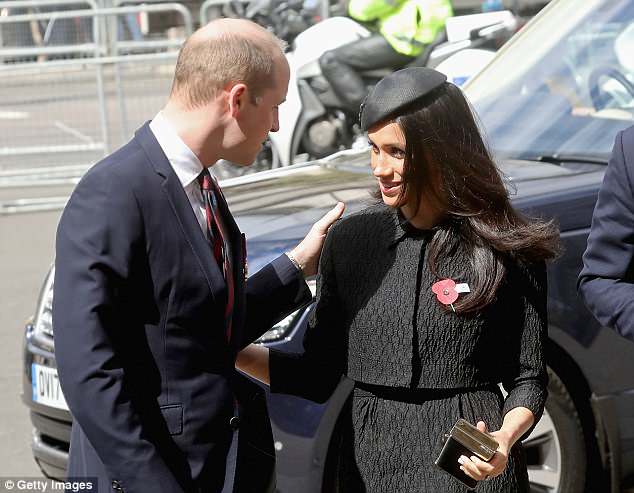 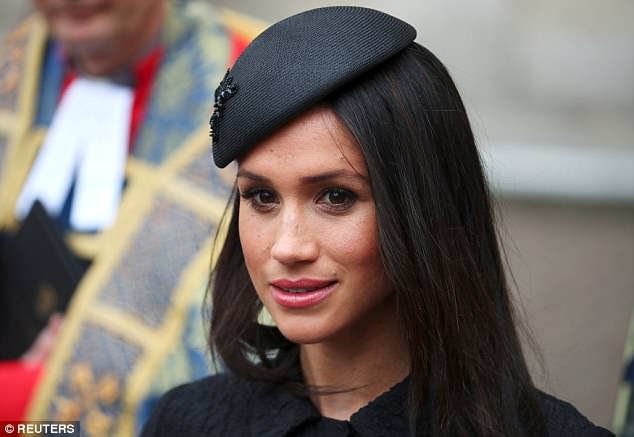 Meghan and Harry are due to get married in less than a month at St George’s Chapel, Windsor Castle on May 19

Will newborn be Prince Jerry of Cambridge?

He has kept the world waiting for the name of his new son for three days now. And to add insult to injury, yesterday Prince William teasingly offered a few tongue-in-cheek suggestions.

At the Anzac Day memorial service at Westminster Abbey, Australian High Commissioner Alexander Downer asked William: ‘Have you thought of the name Alexander for him?’ The prince whipped back: ‘Well it’s funny you should say that. It’s a good name.’

The comment saw the odds on the little prince being named Alexander falling from 14/1 to even money within the space of an hour, leading William Hill to suspend all betting.

But William was most likely referring to Prince George, whose middle name is Alexander. The Dean of Westminster Abbey also threw in a suggestion – Jerry – as the duke met Sir Jerry Mateparae, New Zealand’s High Commissioner to the UK. ‘Jerry’s a strong name, absolutely,’ William replied politely – although it seems somewhat unlikely the fifth in line to the throne will be Prince Jerry of Cambridge.