Megyn Kelly attacks Starbucks for allowing anyone to use bathroom

Megyn Kelly has criticized Starbucks for their new bathrooms-for-all policy warning it will turn stores into homeless shelters.

The NBC host said that paying customers could be put off by the policy, which means people no longer have to make a purchase to use Starbucks’ bathrooms, as it could attract drug addicts and ‘a mass of homeless people.’

Starbucks introduced the policy after an employee called the cops on two black men, who were waiting for a friend, and hadn’t purchased anything. Today, 8,000 stores will close for racial bias training in the wake of the scandal.

On Megyn Kelly Today, the host said the training wasn’t ‘controversial’, but attacked  the policy of allowing anyone to use the bathroom.

‘Starbucks are going to get overwhelmed with people and is it really just a public space or is it not?’ she said. ‘Paying customers are now complaining.’ 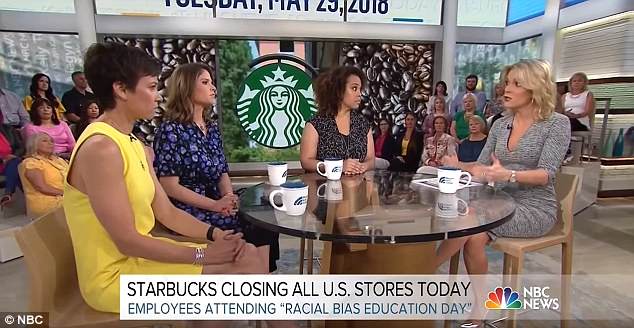 The NBC host said that paying customers could be put off by the policy, which means people no longer have to make a purchase to use Starbucks’ bathrooms, as it could attract drug addicts and ‘a mass of homeless people’

Today show correspondent Jenna Bush Hager argued that the homeless often had little choice, as they had nowhere else to go.

But Kelly fired back that Starbucks’ plan, saying that was ‘not the solution’, adding that homeless people already had churches and other places to go.

‘And it’s a question about whether a commercial establishment is that place,’ the NBC host stated. ‘For the paying customers who go in with their kids, do you really want to deal with a mass of homeless people or whoever is in there — could be drug addicted, you don’t know when you’re there with your kids paying for the services of the place.’ 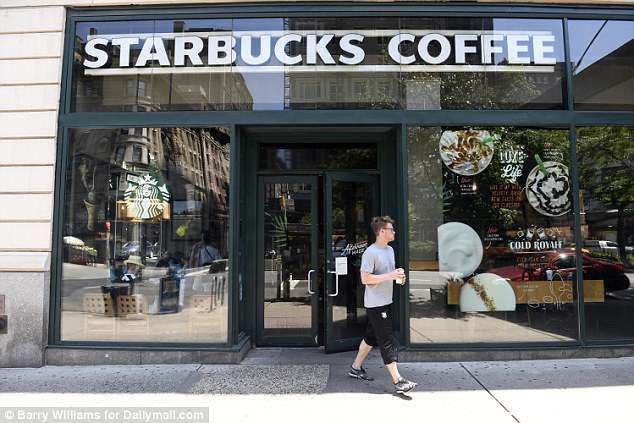 Today, 8,000 stores will close for racial bias training in the wake of the scandal (pictured is the Starbucks near Kelly’s home in Manhattan) 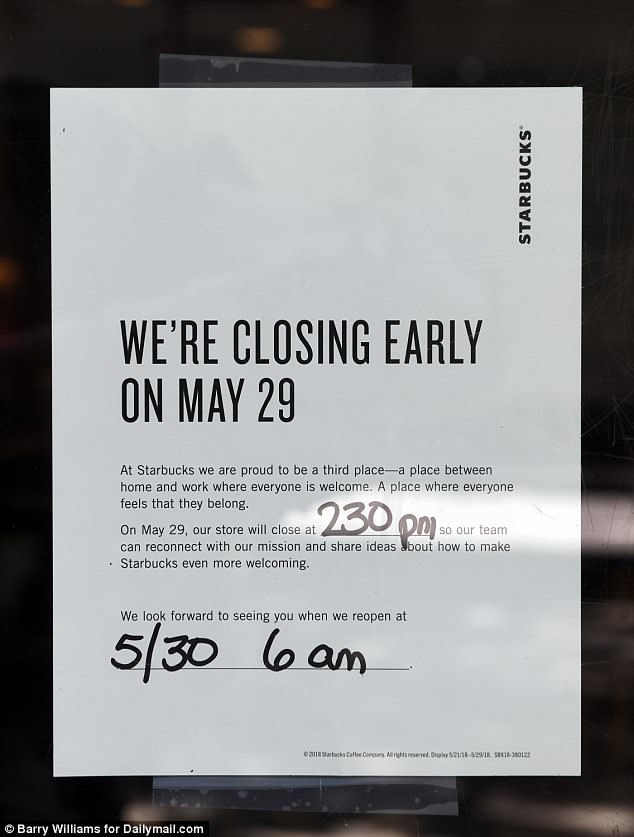 A sign on the door at the 88th St. and Broadway Starbucks,in Manhattan announces it was close at 2.30pm for training

She said he shouldn’t be lecturing anyone on diversity bias as he’s previously written controversial lyrics about LGBT people and women.

‘I’m just saying, you know, if we’re going to hold up somebody as an example to teach on bias, maybe we should be sensitive to that person’s entire record,’ she said.

Starbucks executives have said its previous policies were loose and ambiguous, leaving decisions on whether people could sit in its stores or use the restroom up to store managers.

But after that policy was announced, customers and employees complained that it would invite homeless people and drug users into its facilities while also taking up seats that should be filled by paying customers.

Donte Robinson (right) and his friend Rashon Nelson (left), both 23, had been waiting for a potential business partner to discuss real estate development when one of the men asked to use the bathroom and was knocked back

The company has told its managers that they will have the right to remove anyone who sleeps or uses drugs in their chains, according to The Wall Street Journal.

‘We want our stores to be the third place, a warm and welcoming environment where customers can gather and connect,’ the company said in a statement.

‘When using a Starbucks space, we respectfully request that customers behave in a manner that maintains a warm and welcoming environment by: using spaces as intended, being considerate of others, communicating with respect [and] acting responsibly.’

Starbucks chain managers will have discretion to call the police if they sense that there is ‘immediate danger’.

The policy was introduced after two black men were arrested at a Philadelphia store after one asked to use the bathroom before he had made a purchase.

Donte Robinson and his friend Rashon Nelson, both 23, had been waiting for a potential business partner to discuss real estate development when one of the men asked to use the bathroom and was knocked back. Minutes after the pair had sat down at the coffee shop, the manager called the police and had Robinson and Nelson arrested. 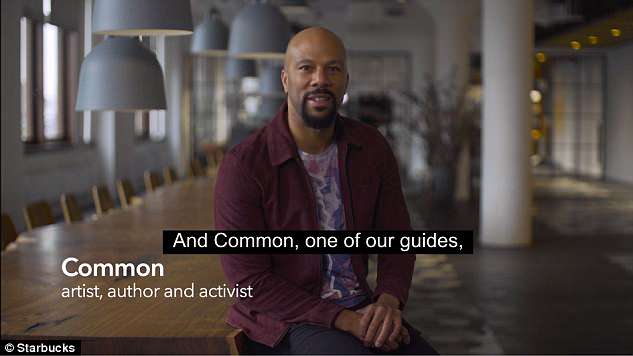 According to a video previewing the Starbucks training, there will be recorded remarks from Starbucks executives and rapper/activist Common

The manager who called police was later fired.

Nelson and Robinson settled with Starbucks this month for an undisclosed sum and an offer of a free education.

They also reached a deal with the city of Philadelphia for a symbolic $1 each and a promise from officials to establish a $200,000 program for young entrepreneurs.

‘It was a reprehensible situation that we took complete ownership of,’ Shultz said of the incident, that he called ’embarrassing’ and ‘horrifying.’

The CEO, Howard Schultz, said that the company had decided to use the experience as an opportunity to improve their training.

‘I think we’re living in a time in America where there is a fracturing of humanity,’ he continued.

The company will shut 8,000 stores today for a training afternoon which will cost them $12million in lost revenue, according to USA Today.

A video previewing the training says it will include recorded remarks from Starbucks executives, including CEO Kevin Johnson and Executive Chairman Howard Schultz, as well as rapper and activist Common.

From there, the company says, its 175,000 employees in the U.S. will ‘move into a real and honest exploration of bias.’