Megyn Kelly had reason to celebrate on Tuesday, as the NBC host celebrated her one-year anniversary on Today.

She marked the occasion with a black party dress, some leopard stilettos, a few celebratory cupcakes and a look back at the highlights from her first year on the air.

Her interview with Jane Fonda did not make the cut.

Guests got to celebrate too by walking home with a a few of Ms. Kelly’s favorite things, including a clock, $75 Minted gift card, earring backs, hair-thickening spray, faux-leather leggings and a pajama set. 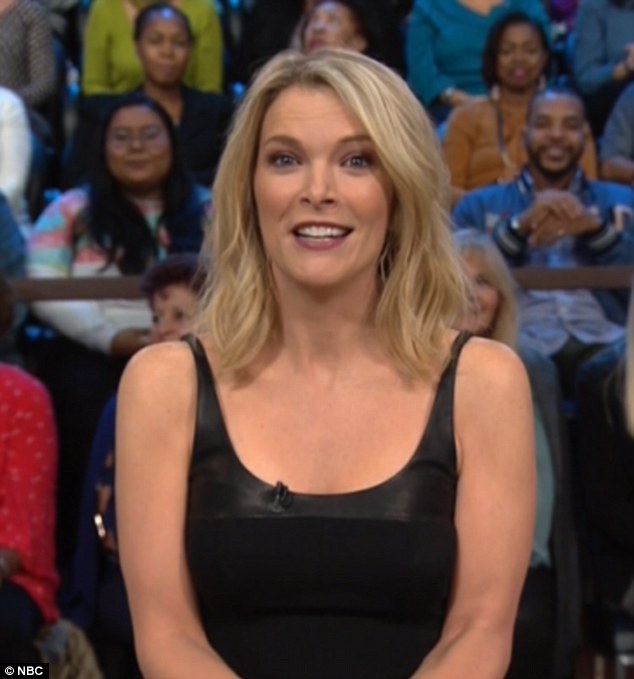 While the $69million host has been at NBC longer, her eponymous hour of today celebrated its first anniversary 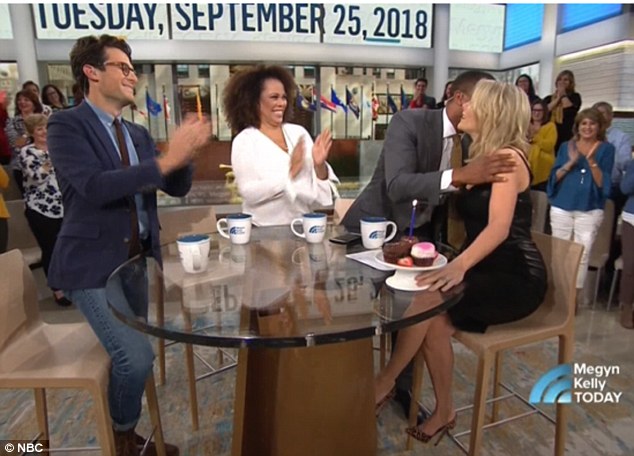 During a panel in the first segment, they panelists ‘commandeered’ the show to congratulate her on the milestone 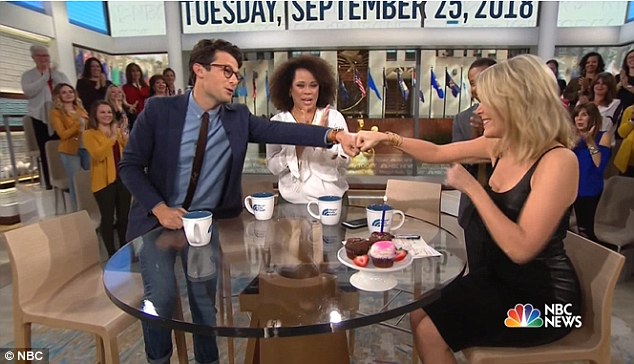 She got fist bumps and a cupcake, despite the fact her rookie year has been plagued by stories of middling ratings and a possible cancellation

Kelly’s first anniversary is a feat that many said would never happen, with near-constant reports emerging during her first few months on the air that NBC wanted out of the three-year, $69-million contract.

But that has not yet been the case, and Kelly has given NBC consistent ratings over the past year while also landing a number of exclusive interviews with women accusing men like Harvey Weinstein, Russell Simmons, Brett Ratner and even Matt Lauer of sexual assault.

Those women appeared in just a few quick flashes during her montage of great moments, while her talks with the boys got much more play.

This despite declaring in her premiere episode: ‘I’m kind of done with politics for now.’

She played some clips from her after show, including one segment in which she voiced her excitement about the fact that Charlize Theron would be playing her in the upcoming Fox News film.

Kelly also revealed in the segment that her mother had told her she would like to be played by Stormy Daniels.

There was also her talks with guests including Alyssa Milano and Tarana Burke, Catherine Oxenberg, and the one piece of advice she had repeatedly offered those who defend men accused of sexual misconduct.

‘I understand that people want to defend the company. Having been through this now, a couple times, you don’t know,’ said Kelly.

‘Just because it wasn’t your experience, doesn’t mean it wasn’t the experience of your colleagues.’ 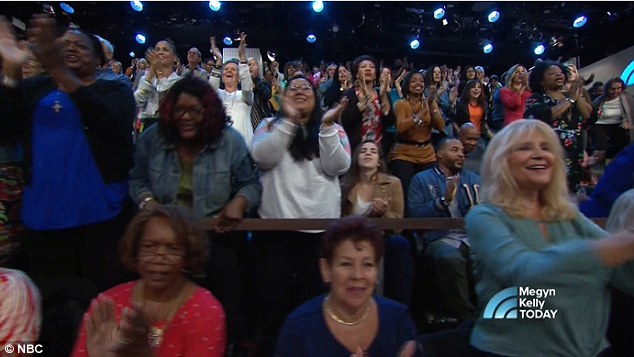 The audience humped to their feet to applaud the news woman 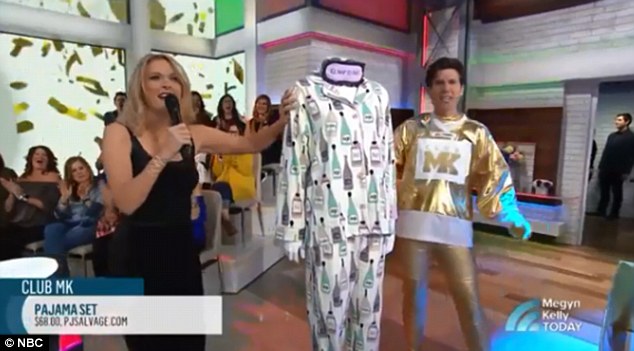 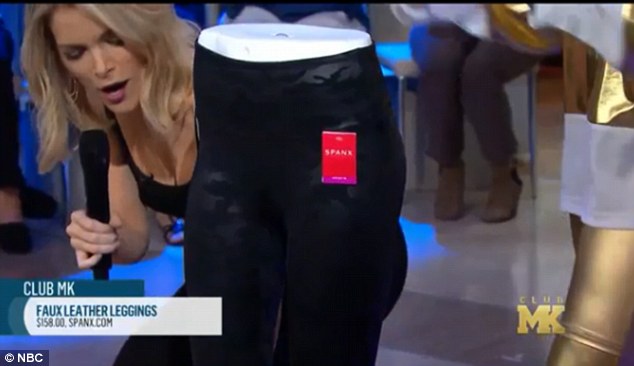 In addition to a gift giveaway, including her favorite faux leather leggings, she played a montage of some of her favorite moments from the past year

That cut comes on the heels on a Daily Beast story about NBC president Andy Lack in which he was accused of covering up incidents of sexual harassment over the years.

‘Weeks after [Matt] Lauer was fired, a former production assistant on the Today show named Addie Collins Zinone went public about her affair with Lauer in the early 2000s,’ read the story.

‘She gave her first interview to Megyn Kelly, whom Lack lured from Fox News with a reported annual salary of more than $20 million. Since then, Lack has been annoyed, sources said, at her insistence on turning the show into a regular forum for the alleged victims of powerful men.’

That was not the only time that Kelly let her principles stand in the way of protecting the network either according to the report.

She was reportedly told to back off when preparing a report on Tom Brokaw as well, who was also accused of sexual misconduct by multiple women.

‘Kelly has been frustrated by NBC pushback on much of her coverage,’ a soruce close to her told The Daily Beast.

‘In particular pushback on much of her #MeToo coverage. In particular she was said to be in disbelief when the head of PR, Mark Kornblau, called her personally to urge her not to cover the Brokaw allegations at all, a request she refused.’

And when it came time for her to discuss Brokaw on the show, she stated: ‘You don’t know what you don’t know.’

Kelly’s show has not been able to top rival Live With Kelly & Ryan in the ratings or top the numbers notched by Tamron Hall and Al Roker when they hosted the 9am hour prior to NBC’s decision to hire Kelly.

Hall and Al Roker were comfortably in first place and delivering solid ratings for Today when the decision was made to move Kelly into the third hour.

That move came just as Hall’s contract was up, and she ultimately decided not to resign with NBC News and instead walked out after being told she would essentially be serving as a placeholder for Kelly on Today.

It was a shocking departure for the woman who had long been one of the hardest working personalities on the network, who on some days filled in for both Savannah Guthrie on Today and Lester Holt on NBC Nightly News while also anchoring the third hour of Today.

On one day in December 2016 she filled in for both Guthrie and Holt while also hosting MSNBC Live and doing her third hour duties.

She also hosted Deadline: Crime on Investigation Discovery and Dateline Extra on MSNBC, as well as lending her on-air talents to NBC’s coverage of the Westminster Dog Show.

Roker anchored the third hour with Sheinelle Jones and Dylan Dryer in the wake of Hall’s departure, which also proved to be a winning combination.

Unlike Hall however, the meteorologist already had a steady gig on Today when he learned the news about Kelly’s arrival, appearing on the program’s first two hours

The third hour had topped its time slot for seven straight weeks when the news was delivered to Hall and Roker that Kelly would be taking over for them, and making a whole lot more money.

DailyMail.com revealed last year that Kelly is signed to a three-year contract valued at $69 million, close to 20 times what her predecessor Hall was paid and double the combined salary of Hall and Roker.

This sizable investment has resulted in a program that averages 2.4 million viewers an episode, which is 18 percent below what the hour was pulling in last season according to data from Nielsen.