Stephen Belafonte has hit out at ex-wife Mel B over a sinister ‘Devil’ nickname she has given him whenever he calls to talk to his six-year-old daughter Madison, court documents reveal.

Belafonte claims the caller ID that appears on Mel’s cell phone when he calls his daughter is not ‘Stephen’ or ‘Daddy’ – it’s ‘Diablo Devil’, according to a new legal filing obtained by DailyMail.com.

The former Spice Girl ‘has resorted to identifying me as ‘Diablo’ or devil on her phone,’ says Belafonte in paperwork filed at Los Angeles Superior Court.

‘Therefore, whenever I call to speak to Madison, she sees that word Diablo (Spanish for devil) as the identification of the person calling her.

‘I recently learned that Brown testified in a deposition that Madison “cannot read” and therefore has no understanding of the word “Diablo”. Madison is six years old and can read.’

Belafonte, 42, also claims that Mel – real name Melanie Brown – is attacking him just as she did to another ex, Jimmy Gulzar, father of the America’s Got Talent judge’s oldest daughter, Phoenix, 19.

Former Spice Girl Mel B has been accused of trying to sabotage ex Stephen Belafonte’s relationship with their daughter Madison, six (Pictured above in 2016) 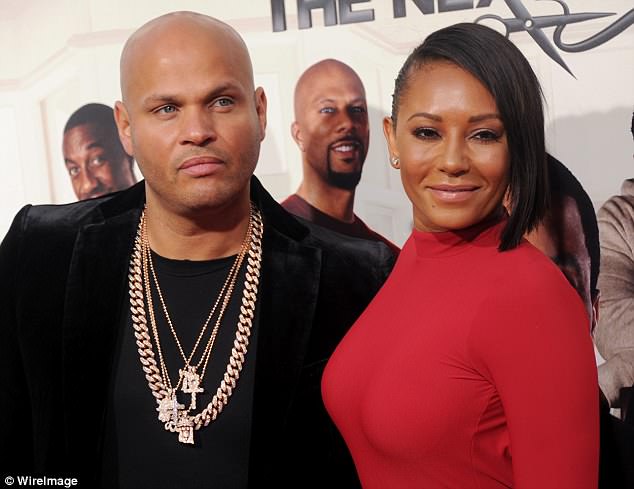 Still at war: The couple’s divorce was finalized last year, but their legal battle is far from over as the two are currently fighting over their children 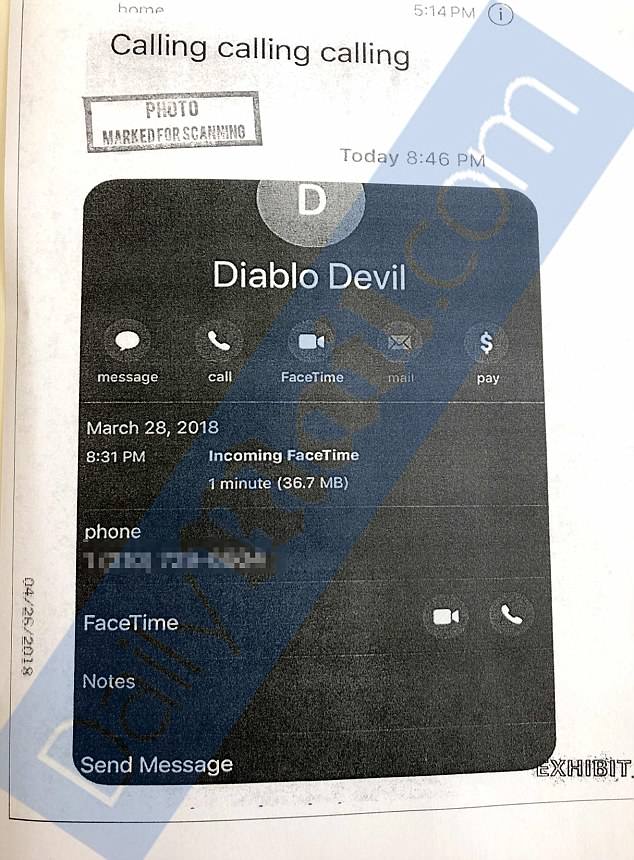 ‘Not only is Brown attempting to interfere with and sabotage my relationship with Madison, she is perpetuating this litigation to destroy me financially,’ he states.

‘During our marriage, Brown would tell me that whatever money she owed Mr. Gulzar, she would force him to spend by tying him in continued litigation.

‘Throughout our marriage, Brown told me that Mr. Gulzar abused her and threatened to attack her and that she was scared of him. I believed her.

‘Brown would routinely and regularly bad mouth Mr. Gulzar to Phoenix when Phoenix was still a child and not even a teenager. Brown would tell Phoenix that her father was a “bum”, a “loser” and that all he wanted was Brown’s money and that he had manipulated her for years.’

In his new court filing, Belafonte includes an email sent to him by Mel, also 42, before their marriage went sour, in which she writes: ‘Thank you so much honey for rescuing phoenix, (sic) what her dad did to her is disgusting he should be shot thank god she has you honey. I can’t tell you how much it means to me that you went all the way to LA to get her for me. I love you even more! xxxxx.’

The couple’s 10-year marriage ended in divorce last December after a nasty, seven-month battle in which lurid tales of kinky sex, drug and alcohol abuse and allegations of domestic violence made headlines.

He and Mel were given joint custody of their biological daughter Madison, but when he went back to court to try to win step-parent rights to visit Angel, Mel’s 11-year-old daughter by Eddie Murphy, Mel vehemently opposed his motion, which is still pending. 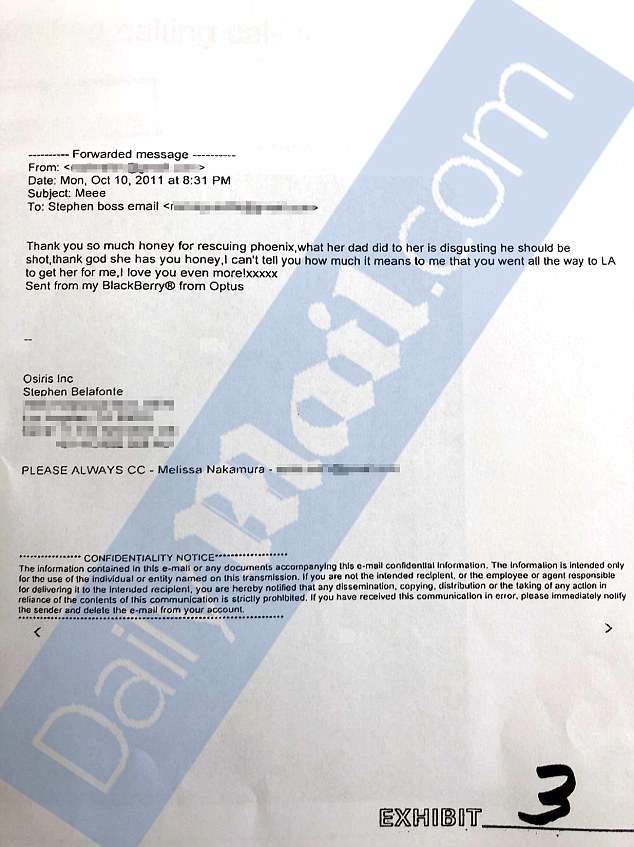 In an old email submitted to the court by Belafonte, Mel thanks him for ‘rescuing’ daughter Phoenix and saying her father ‘should be shot’

The former Spice Girl was married to Dutch actor Jimmy Gulzar (left) from 1998 to 2000. Belafonte claims Brown used to ‘badmouth’ her ex to their daughter Phoenix Gulzar (right) when she was still a child

The latest claims and counter claims from the warring couple – she says he’s ‘bullying and terrorizing’ her, he says she’s ‘tarred and feathered’ him and ‘ruined’ his ability to work – come in response to his request to the court for an order to seek therapy for Madison, to help the child cope with the emotional trauma she’s suffered over her parents’ acrimonious divorce.

While Mel agrees that Madison should get counseling – something she says she herself called for months ago – the British singer and her ex are squabbling about which therapist they should choose.

And Mel is furious with what she calls the ‘false and misleading’ statements in Belafonte’s declaration to the court in support of his therapy request for Madison.

In court papers, Belafonte accuses Mel of ’emotionally abusing our child Madison, as well as our step-daughter Angel, and my own child, Giselle Belafonte, in this divorce as part of her plan to alienate the children from me.’

He says Phoenix witnessed Mel’s heavy drinking at home and in one incident had to help her mother up the stairs, ‘when she could not walk in the middle of the day because she was so drunk… Phoenix heard and knew about how Brown’s alcohol and drug addiction was the primary reason our marriage fell apart.’

In his court declaration, Belafonte casts doubt on the authenticity of a letter purportedly written by Angel – the step-daughter he wants visitation with – in which she states she is in fear of seeing him.

‘That letter is a travesty’, he says. ‘Brown used her child.’ And he objects to Mel’s recent invitations to his own daughter, Giselle, by a previous relationship, on outings to award shows and to the set of America’s Got Talent.

‘I do not believe that Brown is including Giselle for any other reason than to try and provoke me,’ he says.

In her response to Belafonte’s accusations, Mel lashes back, saying in court papers that he ‘has no relationship with Phoenix because she witnessed Stephen’s violence, manipulation and abuse towards me in her presence.

‘It seems that the only reason Stephen would offer a rendition of how things are or were between Phoenix’s father and me is to denigrate me and continue his pathetic smear campaign against me. 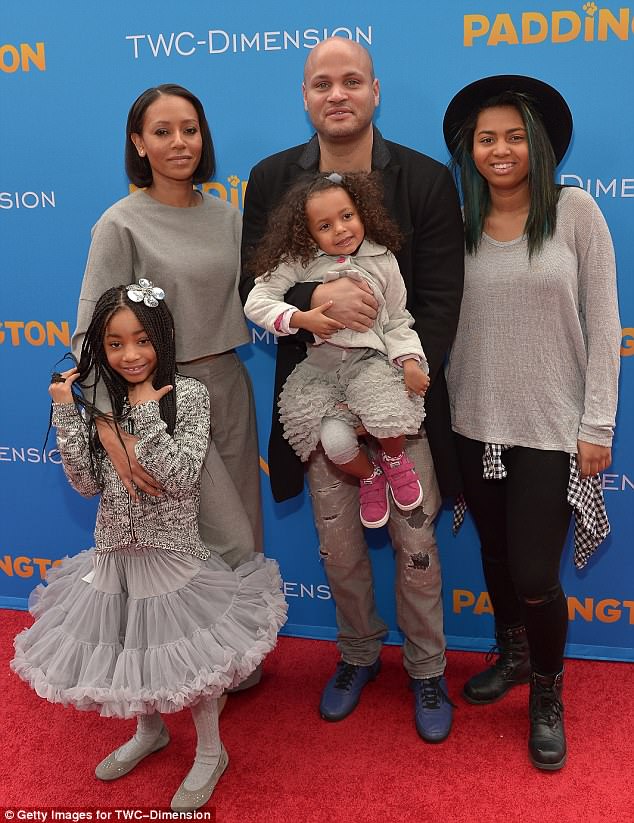 The latest claims come in response to Belafonte’s request for an order to seek therapy for Madison (center) to help her cope with emotional trauma she’s suffered over their split. Pictured above is the couple and daughter Angel, Madison, and Phoenix

‘One such example of Stephen’s smear campaign is the allegation that I urinated on a couch at our home when we were together. Given how often Stephen drugged me during marriage despite my need to care for three kids, there is a good chance he messed me up so bad that I lost control of myself while under the influence of Stephen’s drugs.’

But, adds Mel, ‘Stephen often used drugs to get me to submit to his sexual demands and other abusive conduct. Phoenix, unfortunately, was old enough to recall how I was when under Stephen’s control. I am just learning to work through the trauma I suffered in the hands of Stephen as well as how this affected my family.’

Regarding Mel’s invitations to Giselle Belafonte to go on outings with her and her daughters, Mel says ‘Stephen is upset…but we all consider Giselle family too.’

As for Belafonte’s claim that Mel is alienating their daughter Madison from him, she forcefully denies it, adding: ‘I am at a loss as to how this is possible when Stephen and I have a shared custody plan. He sees Madison every few days…

‘Stephen alleges that I am ‘brainwashing’ Madison… He cannot provide any evidence other than his own stated insecurities and conspiracy theories of what I may have supposedly done’.

Mel and Belafonte broke up in March last year when she filed for divorce, citing irreconcilable differences, and she took out a domestic violence restraining order against him, accusing him of years of abuse against her, embezzling $10 million of her money and keeping her drugged during much of their marriage.

She also took out a civil harassment restraining order against the couple’s beautiful blond nanny Lorraine Gilles whom she branded a ‘home wrecker’ and ‘prostitute’ she claimed had an affair with Belafonte and conspired with him against her by threatening to release embarrassing sex videos of Mel.

Over the following months intimate details were revealed about the couple’s sex life during their marriage, including three-ways with German-born Gilles who claimed to have had a seven-year sexual relationship with Mel.

Belafonte who accused his estranged wife of being addicted to cocaine and alcohol during their marriage – and Gilles, 26 – repeatedly denied Mel’s charges against them and fought the restraining orders through 20-plus court hearings till, at last, the case was set to go to trial in November 2017.

But just hours before the trial was due to start, Mel and Belafonte reached a private settlement and Judge Juhas dissolved the domestic violence restraining order.