Mel B has refuted claims that she ended up in hospital due to a drink and drugs binge by producing a clean drug test.

The Spice Girls star ended up in hospital on Sunday after suffering with a severed right hand and broken ribs, where she was visited and supported by her Spice Girls bandmates.

In a drug test obtained by The Sun, the singer set the record straight that the fall had nothing to do with booze or drugs.

Setting the record straight: Mel B, 43, refuted claims that she ended up in hospital due to a drink and drugs binge by producing a clean drug test after sharing snaps from her bed with the Spice Girls

The test shows a ‘not detected’ result for several types of drugs including cocaine, methadone, opiates and amphetamines.

It also shows a ‘not detected’ result for alcohol.

A source told the publication that Mel would not accept any negative remarks toward her reputation by her ex, Stephen Belafonte.

They said: ‘This was her 15th drug and alcohol test and she has cleared them all. 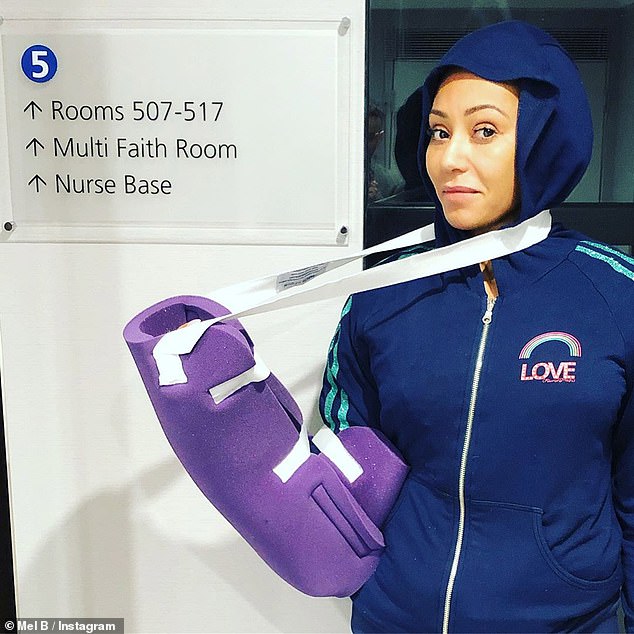 Clean: The test shows a ‘not detected’ result for several types of drugs including cocaine, methadone, opiates and amphetamines

‘She’s not going to accept any sort of slur on her reputation because Stephen wants to try and make her look bad. The results are there to see in black and white.’

They added that the fall was simply due to the pop star losing her footing and slipping, cutting her hand on a glass picture frame in the process.

Mel’s mother Andrea Brown recently said the Spice Girls star was involved in a ‘freak accident’ which led to her suffering the sustained injuries.

The 61-year-old matriarch, who became estranged from Mel while she was married to ex Stephen, insisted that the America’s Got Talent judge will be OK following the mystery accident.

Speaking exclusively to MailOnline, the property manager, who is based in Leeds, said the mystery mishap has ‘set Mel back’ but she is hoping to be out of hospital and home for Christmas. 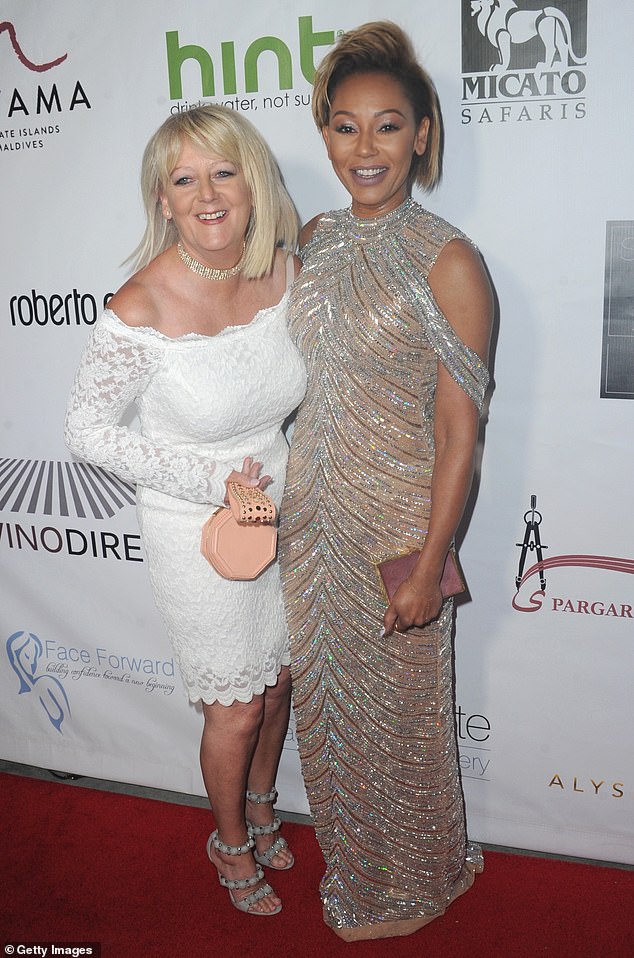 ‘Freak accident’: Mel B’s mother Andrea Brown has said the Spice Girls star was involved in a ‘freak accident’ which led to her suffering two broken ribs and a ‘severed’ hand

She said: ‘She had a freak accident. It’s not for me to say how it happened, she’ll tell her fans on Instagram if she wants, but it’s set her back.

‘She’s still in hospital, she’s just had an op and she can’t fly back to America yet. But she’ll be OK and will hopefully be up and about soon and hopefully home for Christmas. She’s a fighter.’

And while Andrea discussed her daughter’s health, her close friend Gary Madatyan is said to have told TMZ that the singer sustained the injuries after falling down the stairs at the house of a friend she was staying with.

According to the website, Gary revealed that when the mother-of-three attempted to make her way downstairs after waking up in an upstairs bedroom, she struggled to navigate the narrow staircase and subsequently lost her footing. 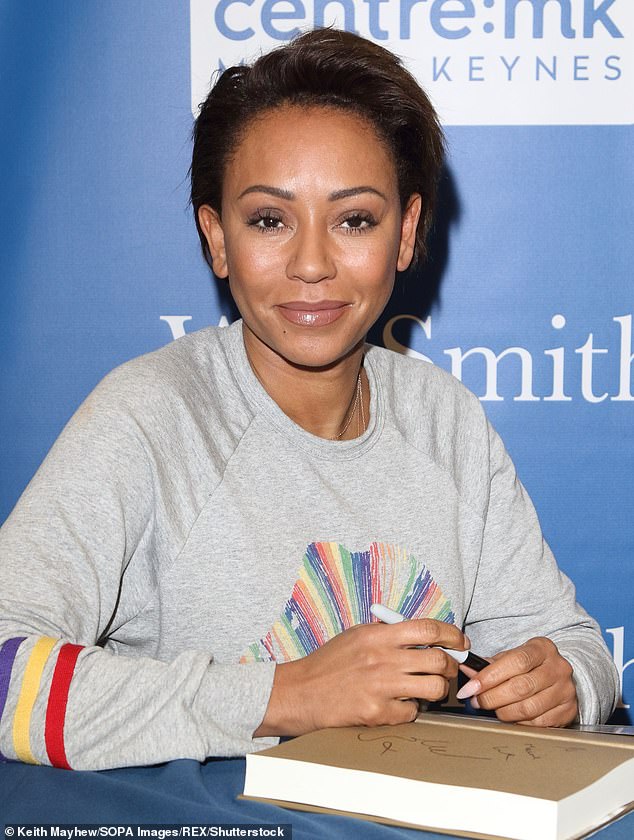 Ouch! Mel B revealed she suffered two broken ribs and a severed right hand in a mysterious injury that left her needing three hours in surgery in a worrying Instagram post

Taline Boyamian, a lawyer for the star, has since insisted that neither drugs nor alcohol were involved in the accident.

Since sharing her initial Instagram post, Mel has been supported in hospital by her bandmates, the Spice Girls, after she revealed on Instagram she suffered two broken ribs and a severed right hand.

The singer has been busy promoting her new autobiography Brutally Honest, that details her abusive marriage to her ex-husband but was forced to cancel her latest book signing in New York after the mysterious injury.

Now helping lift her spirits, Geri Horner, 46, Emma Bunton, 42, and Mel C, 44, visited the AGT judge at her bedside as she recovers.

The songtress took to Instagram to share cheery boomerang with her pals, despite her injuries, which saw all of them pull playful shocked faces.

She captioned the shot: ‘When your besties show up to hospital with hugs, laughter and ALOT of love. Ahhhh I love my spice girls yipppeee #friendship #family #spicegirls’.

The photo comes after Mel B left fans concerned as she revealed she has suffered two broken ribs and a severed right hand in a mysterious injury.

The TV star appeared to enjoy a night out in London just 15 hours before posing with her arm in a sling, didn’t reveal how she sustained the injuries, but told fans she had needed emergency care and spent three hours in surgery. 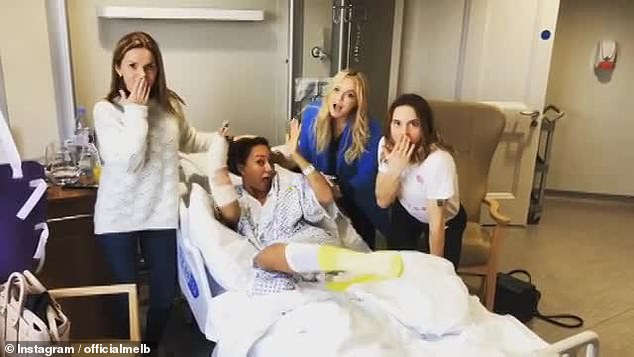 Spicing up her life: Now helping lift her spirits, Geri Horner, Emma Bunton and Mel C visited the AGT judge at her bedside as she recovers

Mel shocked with news of her injury on Instagram, as she took to the social media site with a picture of herself posing with a purple sing on her right arm.

The sling covered her arm from the tips of her fingers to up past her elbow and was supported by a white strap worn around Mel’s neck. She was casually dressed in a striped hooded sweatshirt and appeared to still be in hospital as she lifted her injured arm towards the camera.

While it’s not known how Mel sustained her injury, she alluded that it may have been accidental, adding the hashtag ‘#accidentshappen’ alongside her post.

The former X Factor judge also made sure to thank NHS staff and her ‘amazing’ surgeon, as she shared a lengthy message alongside her post that read: ‘Thank you to all the wonderful nurses dr’s and my amazing surgeon for the care and expertise given to me here at the hospital I’ve been staying at. 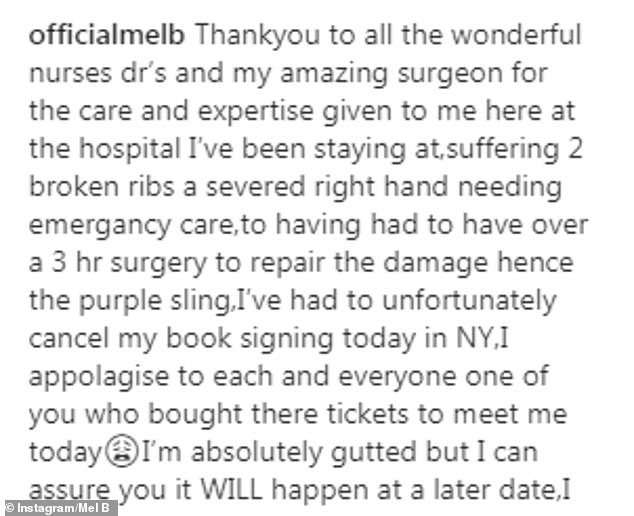 Painful: The former X Factor judge took to social media on Monday detailing her injuries, but hasn’t yet revealed how she managed to sustain them 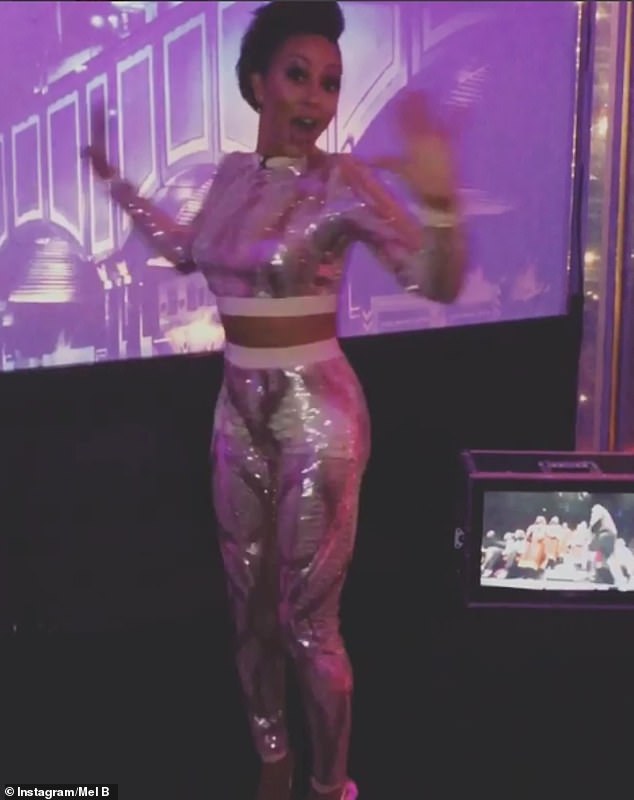 ‘Accidents happen’: Mel alluded that her injuries had been ‘accidental’, with her hospital post coming 15 hours after she shared a clip of her dancing on a night out in London

‘Suffering two broken ribs, a severed right hand needing emergency care, to having had to have over a 3 hr surgery to repair the damage hence the purple sling.

‘I’ve had to unfortunately cancel my book signing today in NY, I apologise to each and everyone of you who bought their tickets to meet me today. I’m absolutely gutted but I can assure you it WILL happen at a later date. I promise.’

Mel continued: ‘For now my right hand/arm is all stitched up and I’m trying to keep still to heal my broken ribs, ohhh the pain, but I’m in super safe hands with the care of everyone here at the hospital!!!!! thank you all for understanding, I love you all #accidentshappen #hospital #needtimetoheal.’

MailOnline have contacted a representative for Mel for comment.

On seeing her post, fans were quick to send the star their well wishes, with many questioning how she had ended up with such painful injuries.

‘WHAT HAPPENED?’ Fans were left concerned after seeing Mel’s post, with many making sure to send the star their well wishes

They penned: ‘Ouch! Feel better! I hope it’s really not a severed [and] though.

‘What happened?! Wishing you a speedy recovery.

‘Omg Mel B… get well soon what happened?

‘Oh my god Melanie Janine. How the living hell did you manage that? I love ya. Glad you are okay.

‘The question is WHAT HAPPENED.’

Just 15 hours before her hospital upload, Mel had shared a boomerang of herself appearing to be on a night out in London.

The Wannabe hit-maker was clad in a glittering two-piece and seemed in great spirits as she spun around to flaunt her show-stopping outfit choice – penning alongside her post: ‘About last night, rose gold everywhere!’ 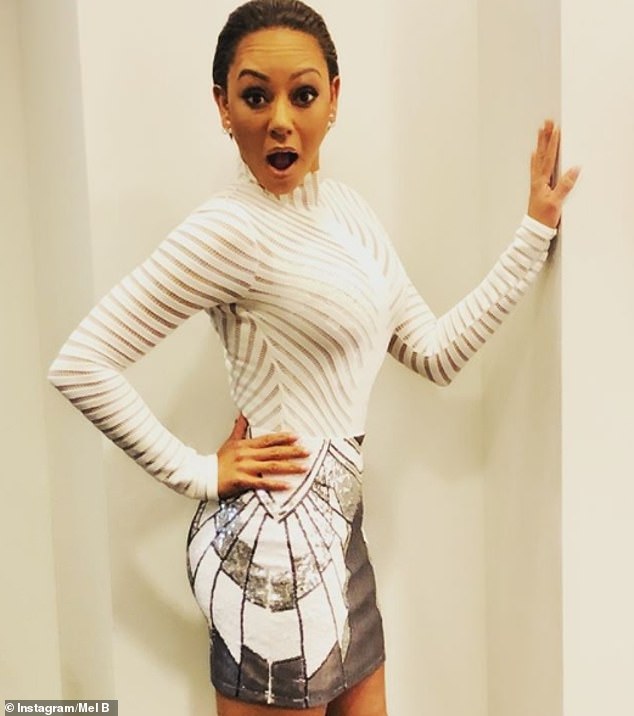 New release: Mel has hit headlines recently with her new release Brutally Honest, that sees the star give a candid account of the abuse she endured from her previous relationship

Mel has hit headlines recently with her new release Brutally Honest, that sees the star give a candid account of the abuse she endured from her previous relationship.

Mel was married to ex-husband Belafonte for 10-years, with the star claiming their relationship triggered her post-traumatic stress disorder and anxiety.

Speaking to Cosmopolitan about her autobiography, Mel claimed she is ‘always going to stay damaged’ following the breakdown of her second marriage.

Mel said: ‘It’s almost like a part of me is always going to stay damaged and this is how I can heal it, by talking about it and forgiving myself and remembering that it wasn’t my fault.’

Mel, who is a patron of Women’s Aid, said that she found working a ‘safe haven’ from the reality she faced at home everyday and became accustomed to putting up a front. 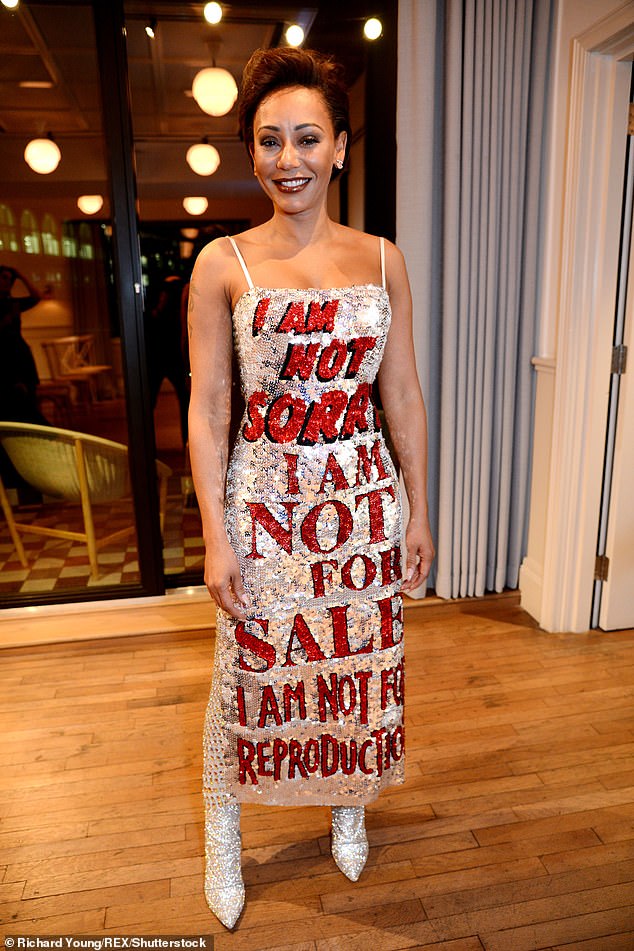 Damaged: Speaking to Cosmopolitan about her autobiography, the beauty claimed she is ‘always going to stay damaged’ following the breakdown of her second marriage

She added: ‘I became very good at living a lie. It was one thing at work, but a totally different story at home. My work was my saviour.

‘When I was working… he was never around me, so that was like a safe haven for me. You end up putting on a brave face and hoping that nobody finds out [what’s going on at home], because it’s just too much.

Mel’s new autobiography, Brutally Honest, talks about abuse and her suicide attempt, and previously said she has no regrets about anything in the book, including her revelations about her ex – who she divorced in 2017.

Late last month, Mel told her fellow Spice Girl Emma Bunton that she wrote her book because she doesn’t want her three daughters to end up in similar situations to her. 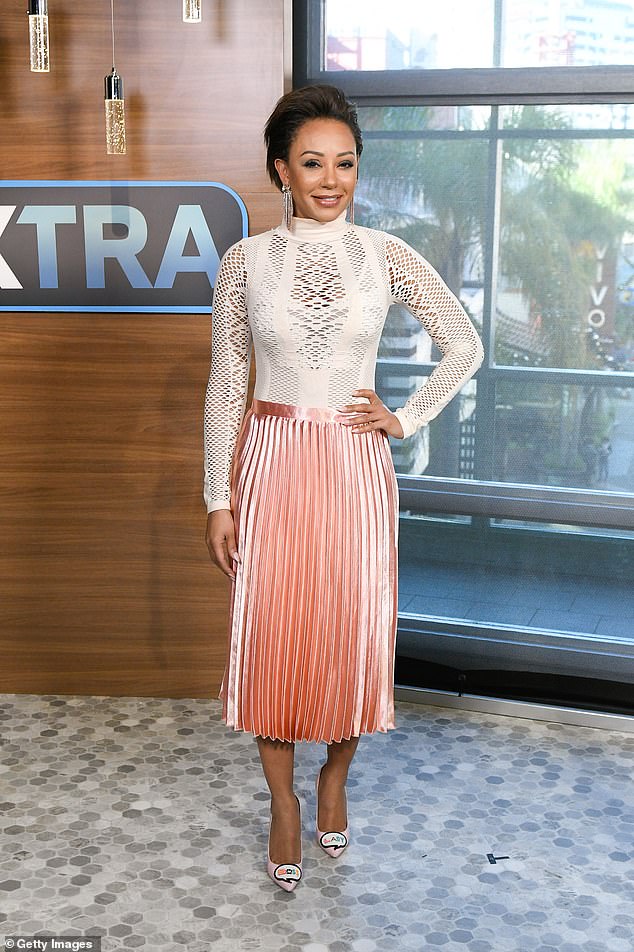 Tough: Mel, who is a patron of Women’s Aid, said that she found working a ‘safe haven’ from the reality she faced at home everyday and became accustomed to putting up a front

Emma said: ‘It’s amazing. I cried through the whole thing by the way. And then Mummy Bunton read a bit yesterday and cried, I was like “Oh my goodness” – it’s just heart breaking.’

Mel, meanwhile, added: ‘If you are in a relationship where you are being humiliated or made to feel less than you are, it is a crime.

‘I became really good at lying and saying my marriage was amazing when it’s wasn’t.’

Belafonte, meanwhile, has threatened to sue Mel over her autobiography, as he claims it includes ‘horrific lies’ – denying any accusations of emotional and physical abuse. 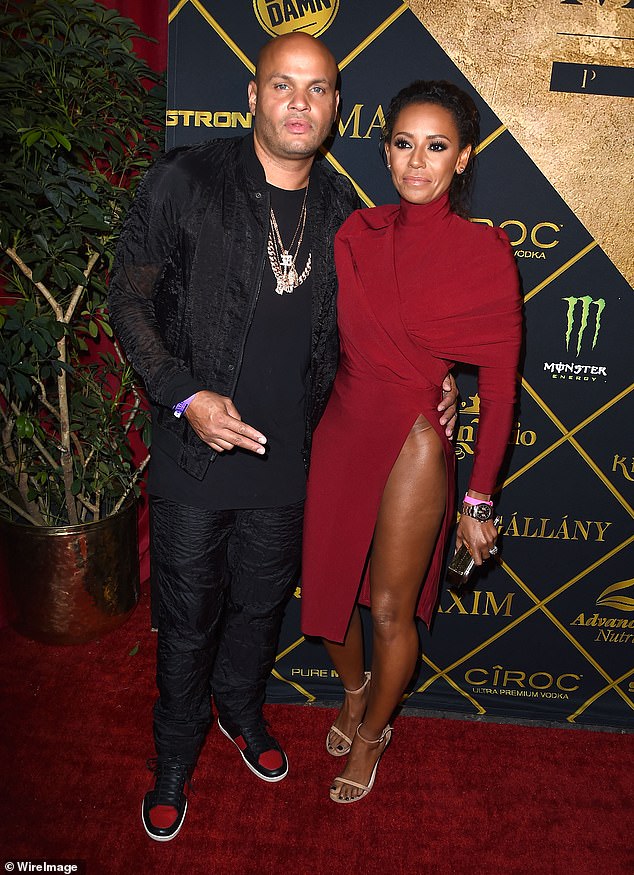 Past: Mel was married to ex-husband Stephen Belafonte for 10 years – they divorced in 2017