The mystery man seen kissing Mel B as she partied at a Hollywood nightclub is an Armenian celebrity hairstylist, DailyMail.com can reveal.

And tattooed entrepreneur Gary Madatyan, who ran the now-closed Boom Boom & Beyond salon in Beverly Hills, is passionate about for aiding abused women through his charity work.

Gary was filmed kissing Mel – who is currently embroiled in a bitter divorce battle with ex Stephen Belafonte – as they partied at an MTV VMAs after party on Sunday.

Onlookers also saw the former Spice Girl lock lips with her new man, who is a doppelganger for Belafonte, during a boozy night out at Tao nightclub.

Friends: Mel B and Heidi Klum, both judges on America’s Got Talent, arrived hand in hand, followed by Gary Madatyan who Mel B later kissed and danced with 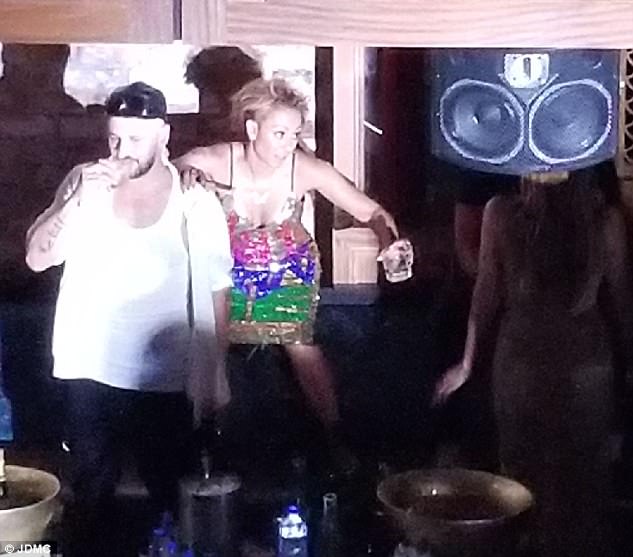 Shoulder to lean on: Mel B was dancing with delight in the VIP area of the Tao club in West Hollywood, while the Boom Boom & Beyond salon owner supported her 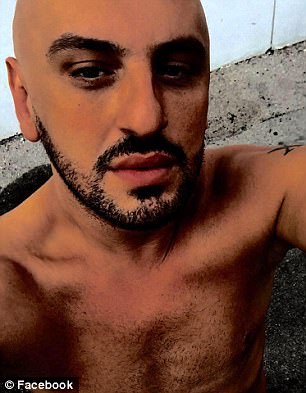 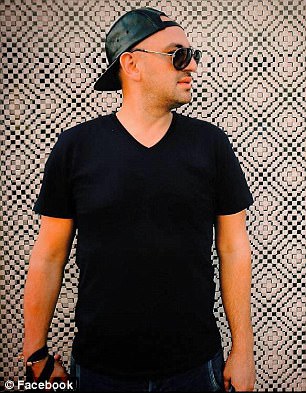 Like Stephen Belafonte, Gary Madatyan sports designer stubble and is bald. Mel B accused her ex of physical and emotional abuse in court papers obtained by DailyMail.com

Mel and Gary partied alongside the star’s fellow America’s Got Talent host Heidi Klum and her boyfriend Vito Schnabel.

Mel – who is responsible for sparking the original ‘girl power’ movement with the Spice Girls in the nineties – is likely a fan of Gary’s work supporting battered women and female support charities in Los Angeles.

Mel, 42, was granted a temporary restraining order against her ex Belafonte, also 42, in April after accusing him of physically and emotionally abusing her.

She alleged that she was ‘in fear’ for her life after a series of beatings and that Belafonte’s alleged abuse ramped up when her career was on an upswing.

Gary, who has a shaved head and a designer stubble like Belafonte, is praised for his career and charity work for women on a blog.

It states: ‘Gary has always had a passion of creating masterpieces. It started at the very young age of 13 when he was doing hair for an Armenian television station.’

‘With the influence of women in his life, such as his mother and sisters, he developed a soft spot for charity work benefiting women.

‘Due to this strong influence he plans to become involved in helping women’s shelters in Los Angeles offering his services for women rejoining the workforce.’ 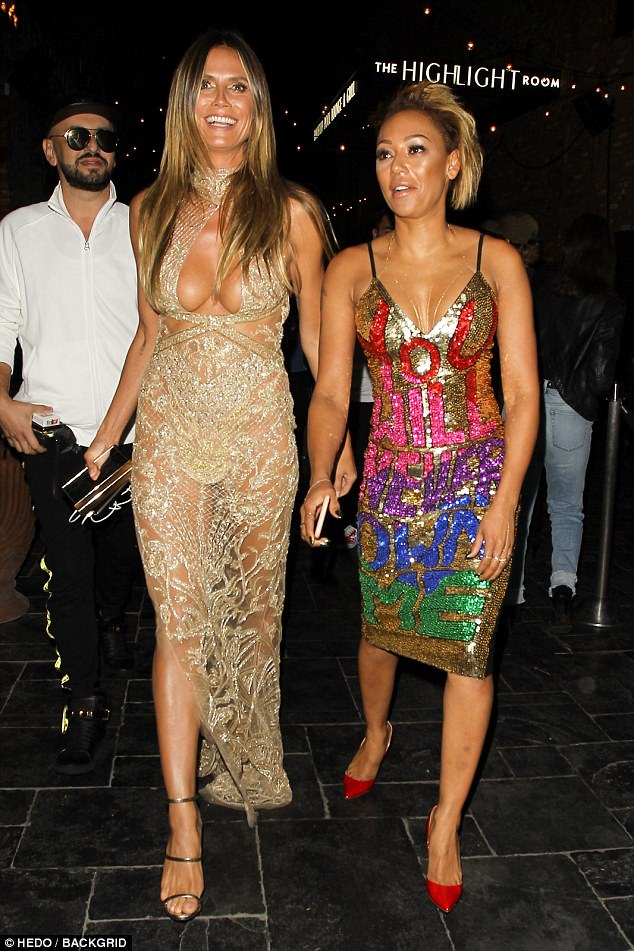 Gary Madatyan used proceeds from his salon’s grand opening in 2011 to assist single moms. He was spotted with Mel B who was drinking vodka at the VMAs after party while he was drinking champagne 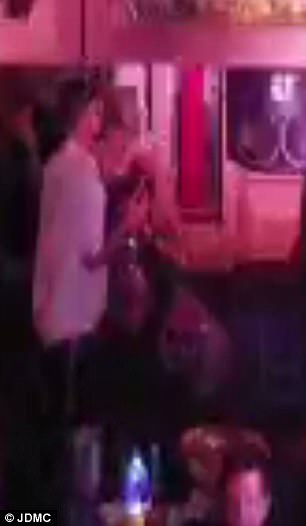 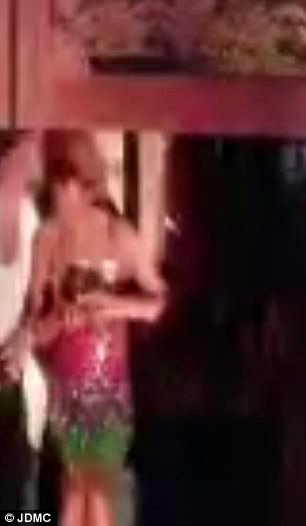 Party time: Mel B and the the hairstylist stood on the banquette to dance the night away at the after party in Tao, West Hollywood

For the grand opening of his Beverly Hills business in 2011, Gary used proceeds to assist single moms.

An online press release states of Gary: ‘Strongly influenced by the women in his life, such as his mother and sisters, and has developed a soft spot for charity work benefiting women.

‘The Single Mom Foundation, founded by single mom, actress, and designer Christina Fulton is dedicated to helping the plight of single parents.’

In March Mel B alleged Belafonte was a serial abuser during their ten years together in filings to LA Superior Court.

Aside from claims that he demanded she have sex with him and ‘random women,’ she also claimed he kept a gun in their home, despite not being allowed to have one due to a prior domestic violence conviction.

In court papers she claimed she attempted to leave him multiple times, but ‘he threatened me with violence and threatened to destroy my life in every possible way… destroy my career and take my kids from me.’

Gary’s open support of women will be a welcome change for Mel. 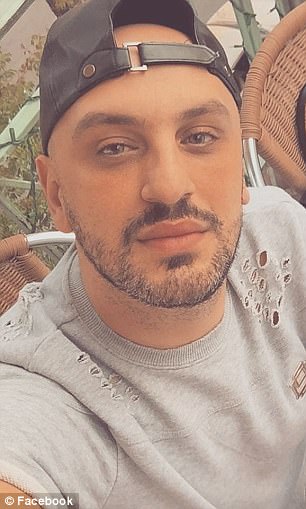 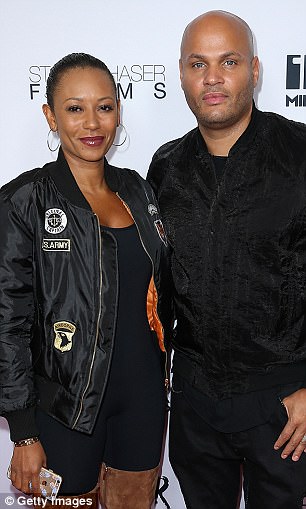 According to his Facebook page, Gary Madatyan is a fan of selfies, designer brands and appears to be close to the same age as Mel B (pictured with Stephen Belafonte in 2016) 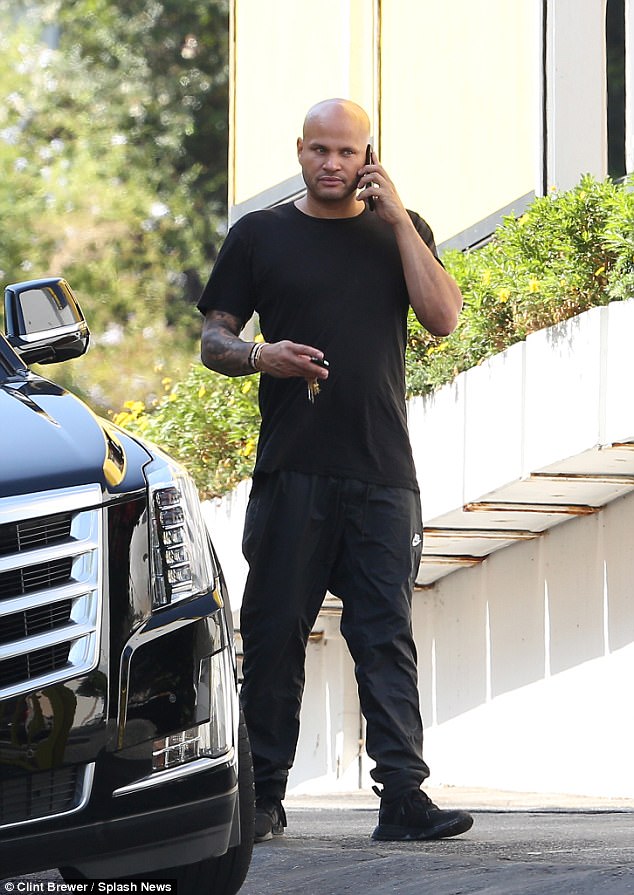 Gary Madatyan bears a striking resemblance to Mel B’s ex Stephen Belafonte, who is barred from coming near Mel B due to her temporary restraining order against him

Originally from Armenia it appears he did his schooling in Beverly Hills before going back home and attending Yerevan State University, in Yerevan, Armenia.

From his Facebook profile Gary, who regularly posts in Armenian and is around the same age as Mel, appears to be a big fan of selfies and designer brands.

Mel certainly seemed impressed with him as they partied Sunday alongside Heidi and Vito.

The pair was holding onto one another and giggling. Onlookers said that Mel was drinking vodka, while her rugged date was swigging champagne.

The couples appeared close with Gary even lighting a cigarette for the German supermodel.

Earlier this month it was reported that Mel has been dating a Beverly Hills cop for several weeks.

Another US media report claimed her new mystery man is still married.

But on last week’s America’s Got Talent, Mel insisted to an audience she was single. She also told NBC on the red carpet: ‘I’m fully single.’

Mel was wearing the same dress at the party as the one which had wowed fans on the red carpet of the awards – a skin-tight sheath emblazoned with the phrase ‘You Will Never Own Me.’ It is understood it was a dig at her former husband.

The singer filed for divorce from Belafonte in March and won a restraining order against him in April.

She is caught in a messy divorce war and libel case with her ex nanny.