Melania fires adviser whose firm got $26M for inauguration

Wolkoff had been working contractually as an unpaid senior adviser to the office of the first lady. 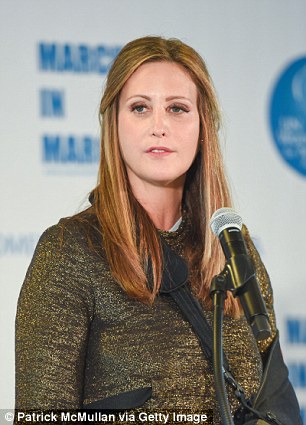 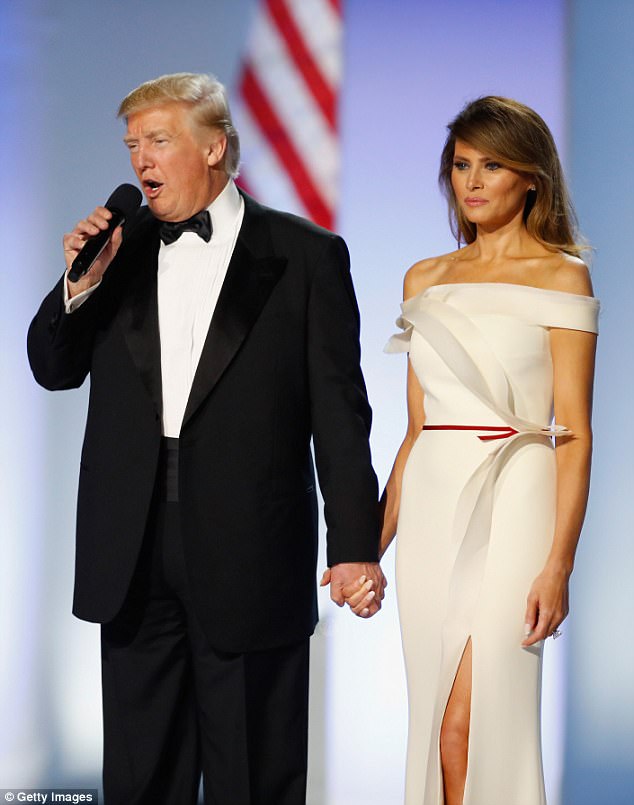 ‘We thank her for her hard work and wish her all the best.’

Wolkoff’s ousting comes after the Trumps expressed their displeasure over the news that the firm, WIS Media Partners, Wolkoff created to help plan the president’s inauguration, was paid nearly $26million.

Trump’s inauguration may have drawn fewer people than President Barack Obama’s, but his parties cost twice as much – including expenses on ‘promotional gifts’ that topped $500,000.

The president’s inaugural committee released an amended 990 form filed with the feds that reveals new details about the $107 million, multi-day affair funded by some of the nation’s biggest corporations.

Including in the filing, was information that revealed a $26 million payment to a firm created just a month before Trump took the oath of office and was inaugurated.

The firm, WIS Media Partners, was listed as being located in Marina del Rey, California, and headed by Wolkoff, who signed on last year as a senior adviser to Melania. 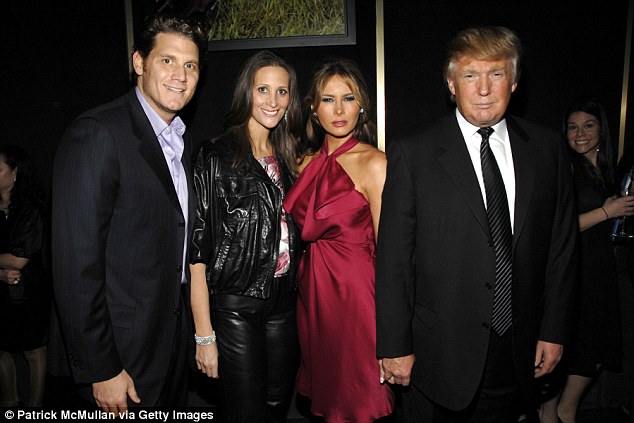 Melania’s team ‘severed the gratuitous services contract with Ms. Wolkoff’ who worked on specific projects, spokeswoman, Stephanie Grisham, said. Wolkoff (second from left) at a fundraiser at the United Nations with Melania and Trump in 2008 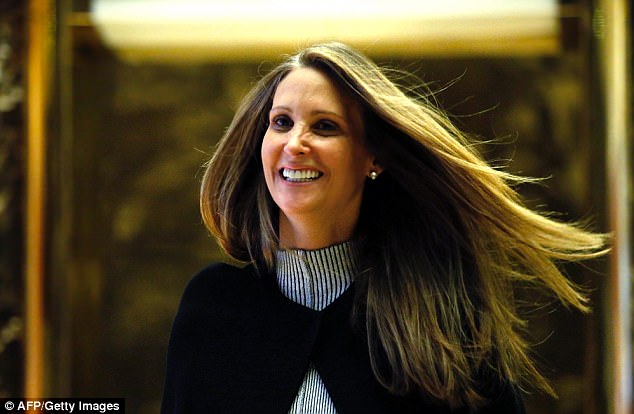 Wolkoff, who is a former Vogue special event planner, helped shape the look of 18 events during the inauguration 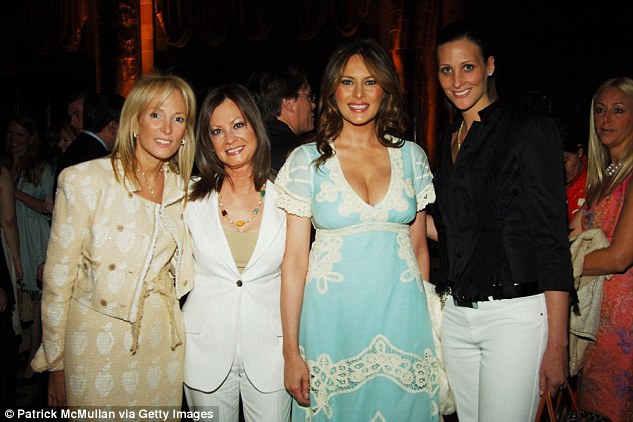 Wolkoff’s ousting comes after the Trumps expressed their displeasure over the news that the firm, WIS Media Partners, Wolkoff (right in 2006) created to help plan the president’s inauguration, was paid nearly $26million

Before she took over her inaugural event planning role, she worked as a special events planner for Vogue, helped stage the Met Gala, and was a fashion director for Lincoln Center.

The firm in turn spent $24 million on subcontractors, a person familiar with the inaugural planning told DailyMail.com.

According to the source, Wolkoff provided ‘the whole look and feel – the creative vision’ for 18 or 20 inaugural events.

It wasn’t immediately confirmed if the entire amount went to Wolkoff or got broken down.

The official told the paper that Wolkoff’s firm paid the team put in place by ‘The Apprentice’ creator Mark Burnett.

Two weeks ago, Grisham told the Times that Melania had ‘no knowledge of how funds were spent’ and said Wolkoff does not get paid for her work in the White House as a ‘special government employee’.

Trump gave a shout-out to Burnett on Twitter this month in advance of the National Prayer Breakfast in Washington. 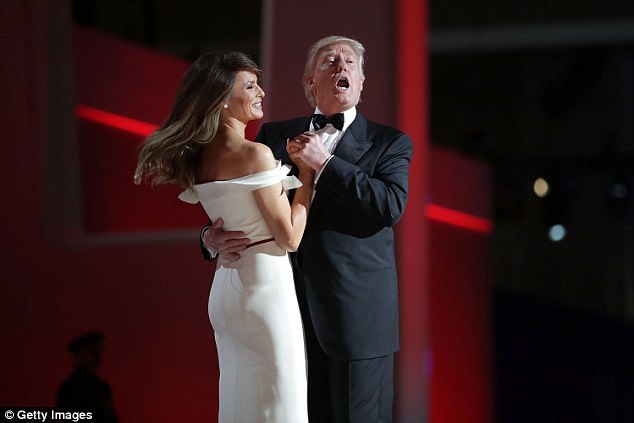 Grisham said that Melania had ‘no knowledge of how funds were spent’, adding that Wolkoff did not get paid for her work in the White House as a ‘special government employee’

‘Great religious and political leaders, and many friends, including T.V. producer Mark Burnett of our wonderful 14 season Apprentice triumph, will be there,’ Trump wrote in advance of the event. ‘Looking forward to seeing all!’

The filing, made with the IRS, did not provide further detail on the promotional gifts. VIPs attending the inauguration got gifts purchased from the White House Historical Association.

Melania presented First Lady Michelle Obama with a large blue Tiffany box during the awkward first joint encounter between the outgoing president and first lady and the new ones in 2017.

Inaugural committees have been known to churn out mugs, pens, coins, cuff links, and other gifts as party favors for high rollers who sped thousands on the event and donate millions to fund the party. 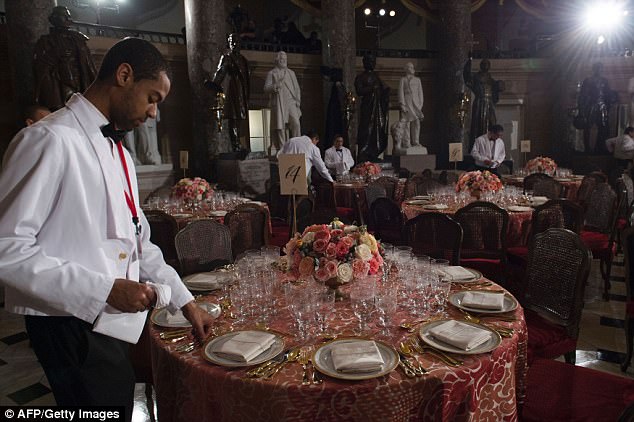 The ceremonial gifts for the President and Vice President are displayed in Statuary Hall in the Capitol for the Inaugural Lunch following Donald Trump’s inauguration as the 45th President of the United States, in Washington, DC, on January 20, 2017 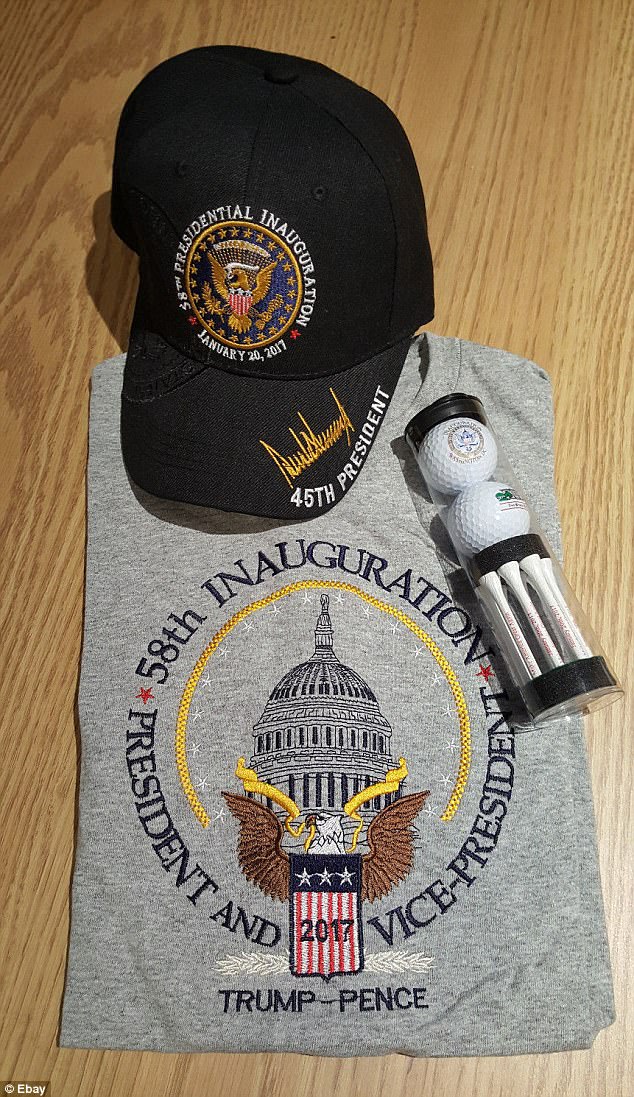 The Trump inaugural spent more than $500,000 on gifts, though precisely which items was not revealed in filings 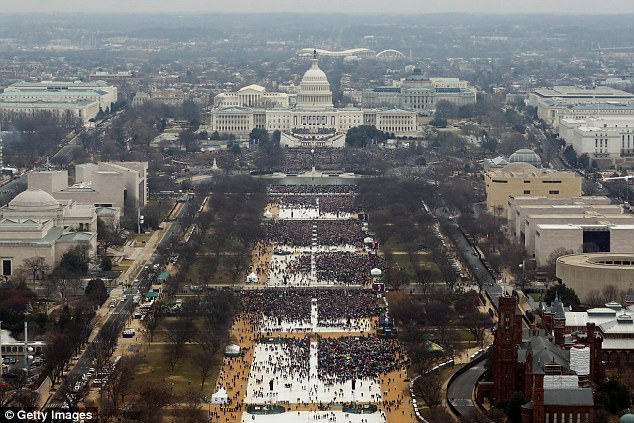 Among the event’s biggest donors was gambling magnate Sheldon Adelson, who kicked in $5 million.

One reason Trump’s cost so much more, according to the source familiar with the planning, is that every participant got paid market rate or better to appear.

Some of the nation’s top performers were jockeying to join Obama’s celebration.

The Mormon Tabernacle Choir performed at the inauguration. The concert on the mall was estimated to cost $25 million. 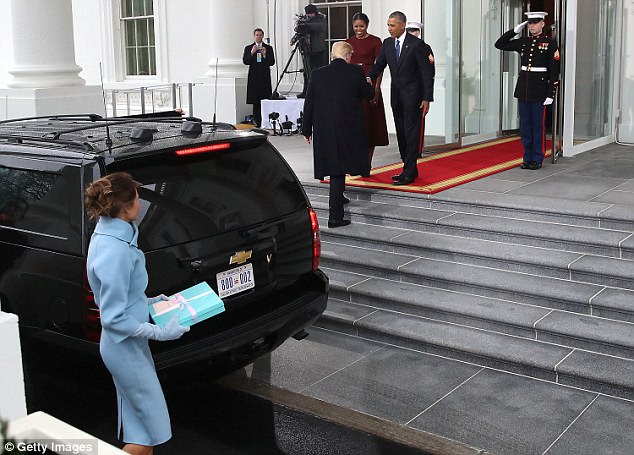 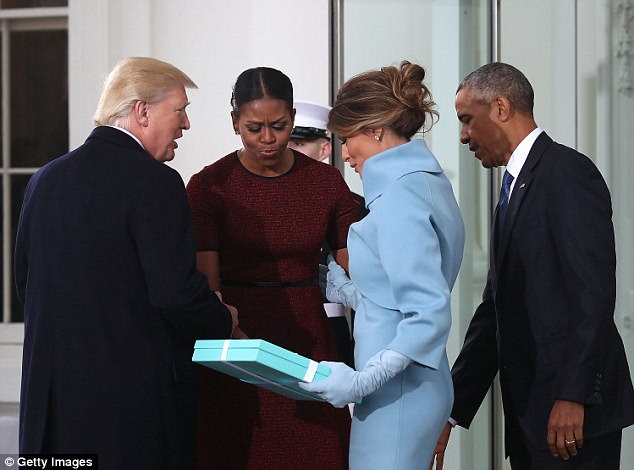 Trump and Melania, are greeted by Obama and Michelle upon arriving at the White House on January 20, 2017 in Washington, DC

Even some costs of protecting the grass on the National Mall – revealed in infamous crowd shots that showed empty white space during Trump’s swearing in that caused Trump to explode over media coverage – had to be borne in part by Trump’s inaugural committee.

Another $2.7 million on the books will yield additional charity contributions unless unanticipated expenses come in, according to the source.

But reports of the large expenditure to the new company drew immediate condemnation from the Campaign Legal Center, which pushed for the release of earlier information about the inauguration.

‘It is uncertain why Trump’s inaugural committee paid nearly $26 million to a newly-created firm with close ties to the Trump family, and paid $25 million to the same event planning firm that did the job for $5 million in 2008,’ said Brendan Fischer of the Campaign Legal Center.