Melania Trump touted her husband’s love and appreciation for American troops in a series of appearances with the military on Wednesday.

The first lady mentioned her husband in some context four times in her three minutes of remarks to troops at Joint Base Langley in Hampton, Va.

‘I speak on behalf of my husband when I tell you we are forever grateful for your service,’ she told the crowd of cheering soldiers and their families. 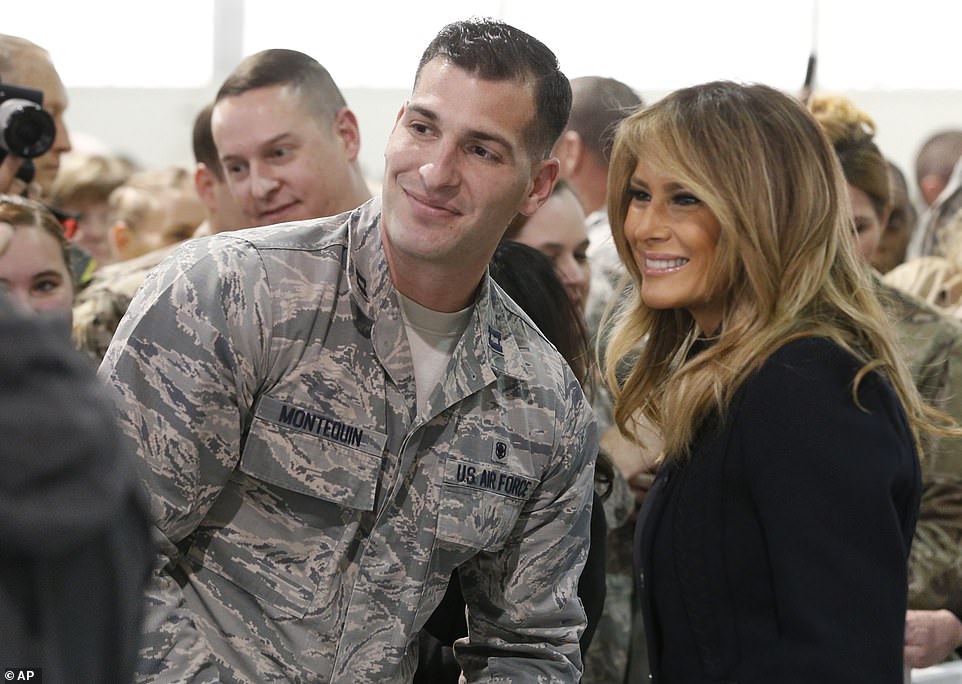 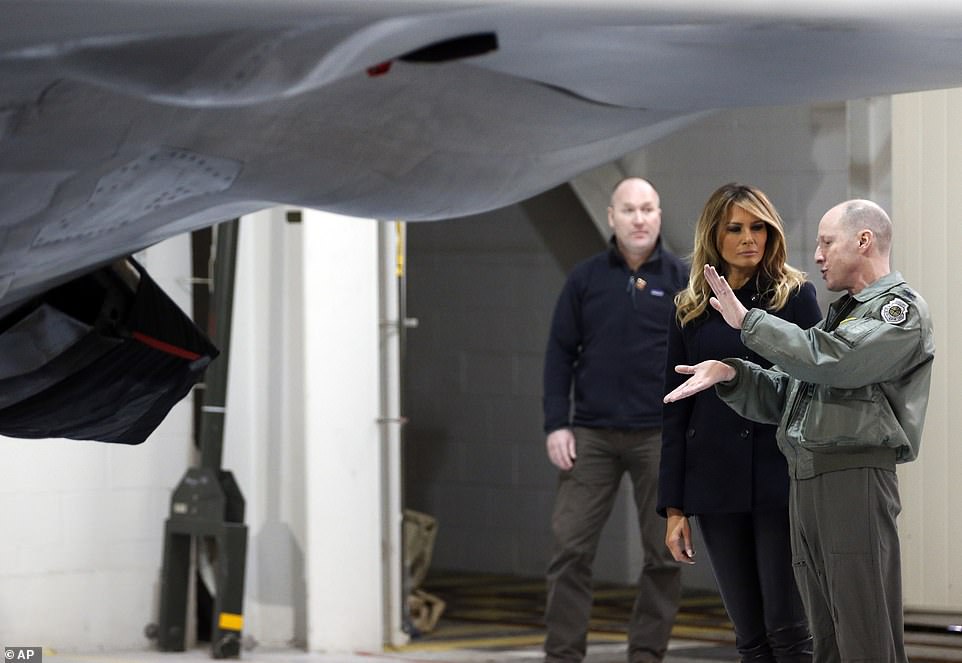 In a series of three appearances at military institutions on Wednesday, the first lady met with service members and toured various facilities, here she learns about an F-22A raptor

‘I want you all to know the president and I are so grateful and have unconditional appreciation for all that you do,’ she noted. ‘This administration will always stand with the men and women of the United States armed forces.’

It was the second stop of the day in what the East Wing billed as a goodwill trip to offer holiday wishes to the members of the military.

But it was notable how often Melania Trump mentioned the president. Her few public appearances usually focus on her signature Be Best campaign and rarely garner a word about her husband.

Her trip came as the president faces questions about when he will make his first overseas visit to troops on the ground.

The first lady – dressed in a black jacket with a double row of buttons, black jeans and black military-style boots – noted that many service members at Langley had just returned from deployment.

‘I am honored to be able to say welcome home and thank you for answering the call of duty,’ she said.

Melania Trump started her day at Joint Base Anacostia Bolling and then flew in a V-22  Osprey – the first time a first lady has ever flown in one – to Joint Base Langley.

She posted a video to her official twitter account showing her trip on the advanced military helicopter. The view is from the cockpit with the pilots, showing the landscape ahead.

She’ll wrap up her day with a visit to the  USS George H. W. Bush to spend time with the crew and tour the carrier.

While on the carrier, she will tape an interview with Fox News host Sean Hannity to air on Wednesday evening, another part of her push for the president.

Hannity accompanied her on her rounds Wednesday and posed for photos at Langley with troops and their families.

Melania Trump said her visit to the Nimitz class aircraft carrier would be particularly meaningful after the death of the former president. She and Trump attended the funeral.

‘It will be very meaningful after the recent passing of President Bush. We continue to keep his family in our thoughts and prayers,’ she said.

It the latest event surrounding the troops the first lady has engaged in during the holiday season. While she skipped the president’s visit to a Coast Guard base when the first family was in Mar-a-Lago for Thanksgiving, she did join the Red Cross in packing ‘comfort kits’ for soldiers upon her return to Washington. 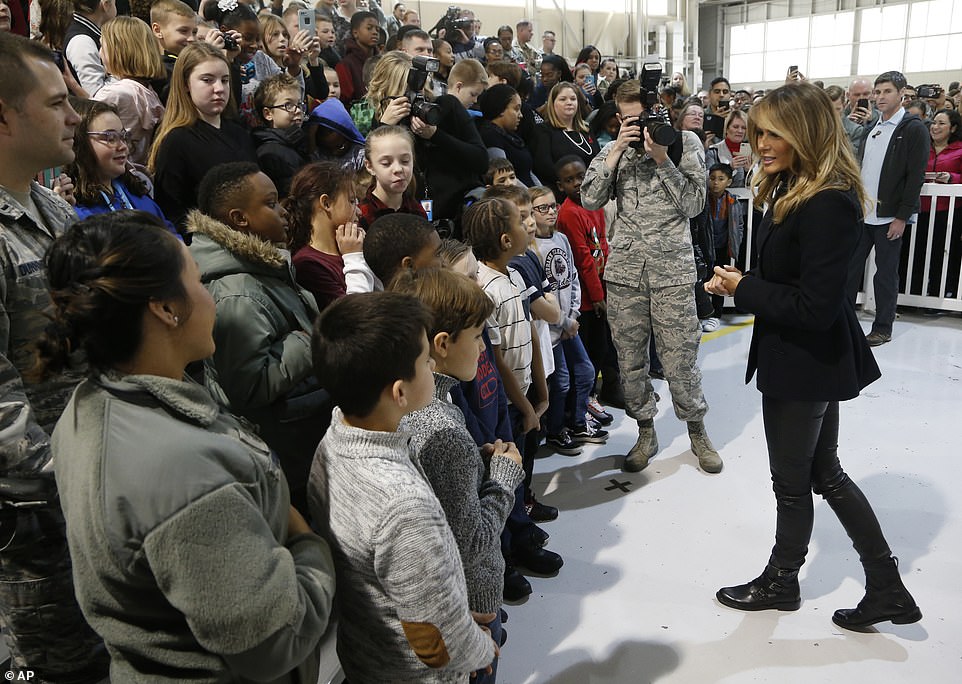 The first lady spent some time with the children of service members at Joint Base Langley, saying ‘wow’ when she saw the group waiting for her 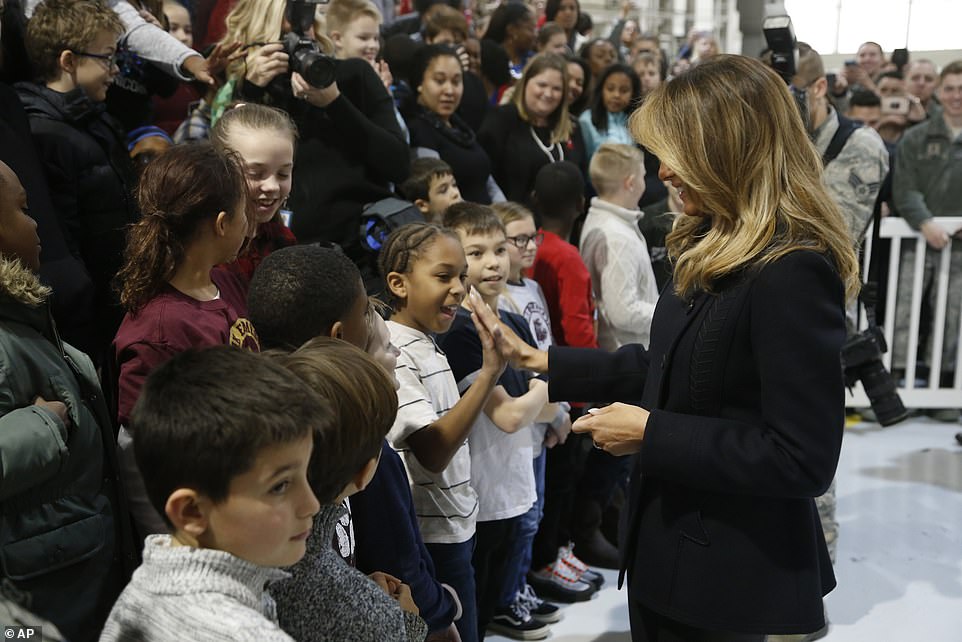 She exchanged some high-fives with the kids 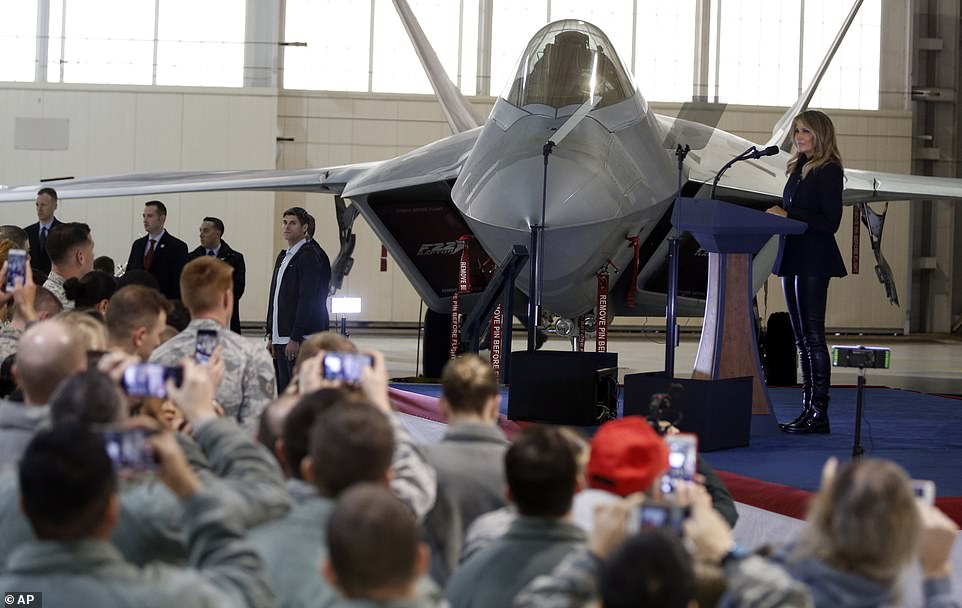 In her remarks, she thanked the troops for their service and offered the president’s gratitude 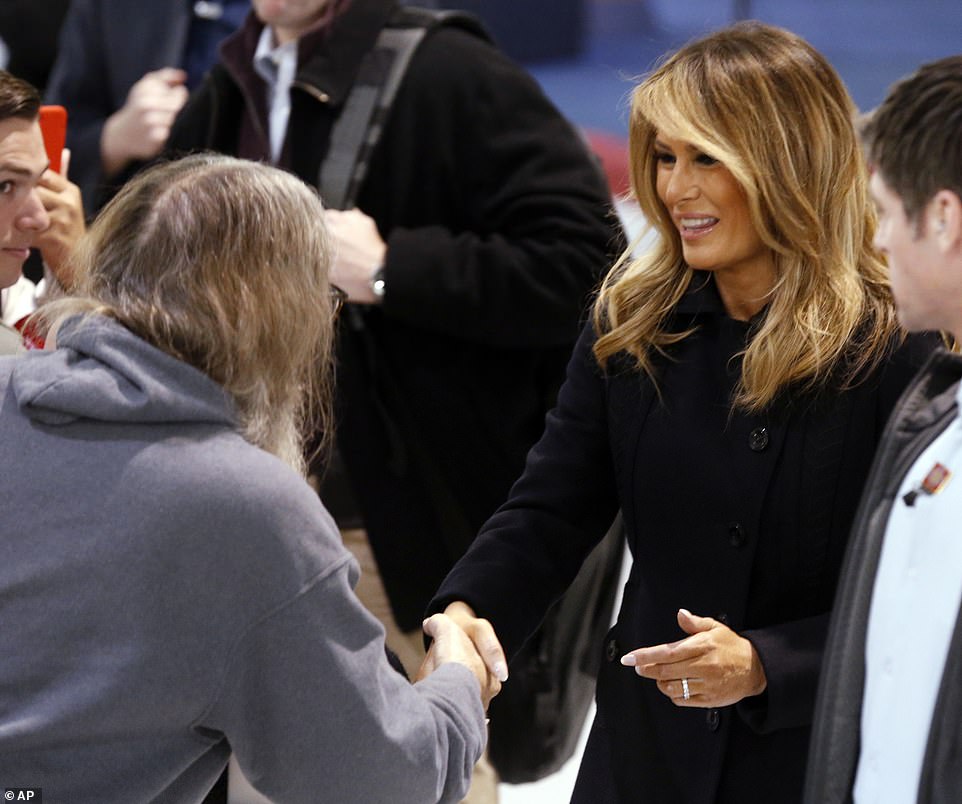 She posed for selfies and shook hands 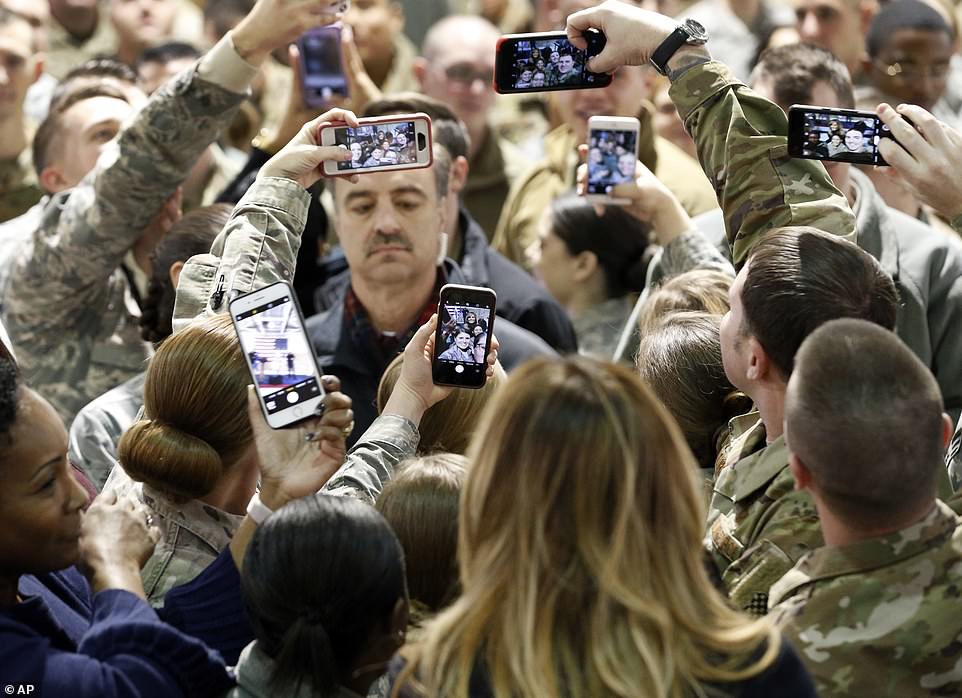 The first lady got a warm welcome from the service members

And, on Tuesday, she joined Marines in collecting toys for their annual Toys for Tots campaign.

Her goodwill tour comes as President Trump is said to be mulling his first visit to a war zone as he’s coming under increased scrutiny for not yet visiting troops stationed in Iraq or Afghanistan.

Trump hinted to reporters on Thanksgiving Day his first visit could come soon.

But when asked by reporters when he was going, the president replied: ‘I do. But I can’t tell you. You’re the last people I can tell.’

The first lady was greeted warmly by the service members in their families, who cheered and applauded her appearance.

After her remarks, she posed for selfie after selfie and shook hands with those waiting along a rope line.

She then went to visit a group of children waiting to meet her, most of them bouncing in anticipation.

‘Wow,’ she said, throwing up her hands in delight when she saw them. 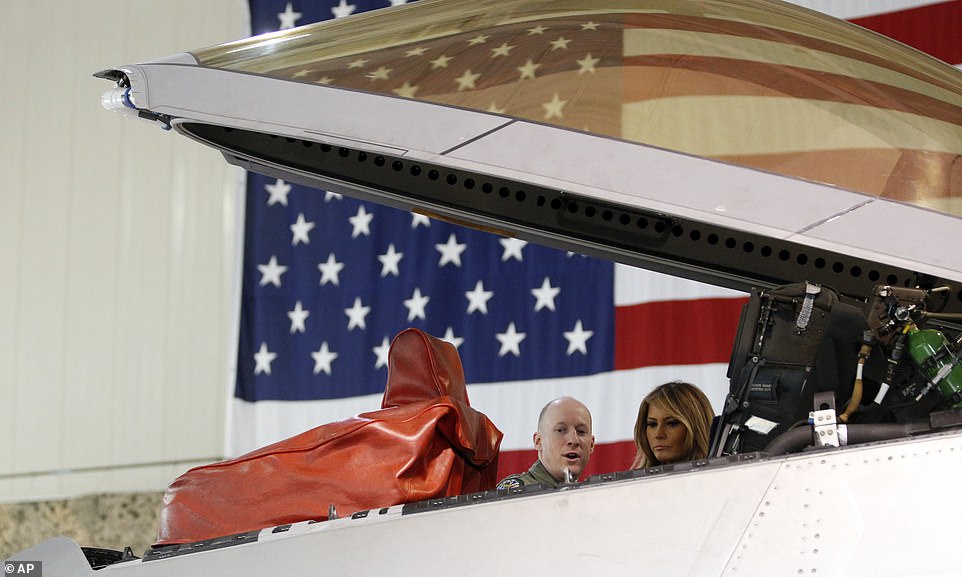 Melania Trump talks with Col. Jason Hinds, Commander of the First Fighter Wing as he shows her the cockpit of an F22 fighter at Joint Base Langley 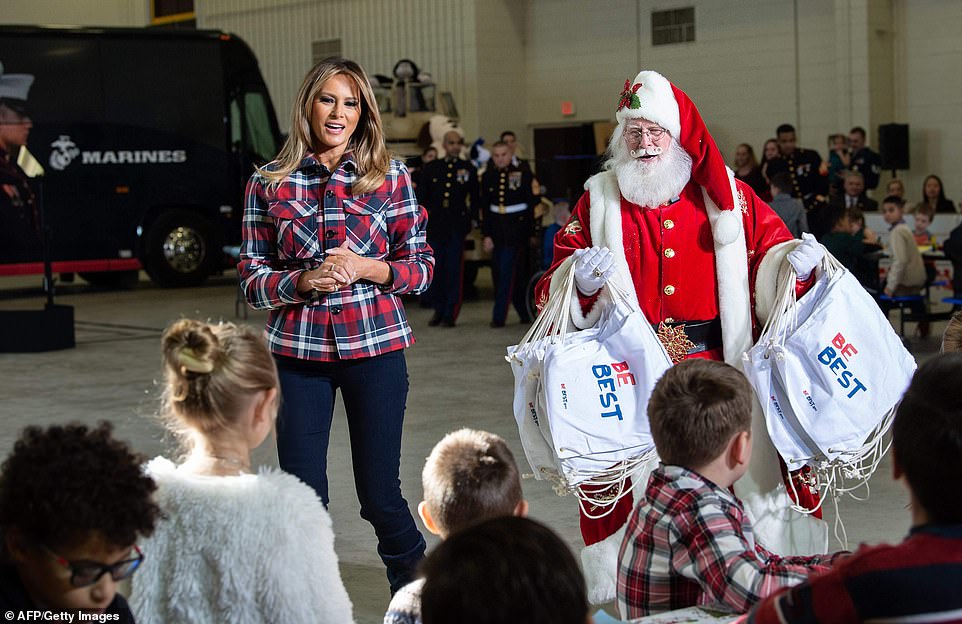 She’s been holding a series of events with the troops; on Tuesday she helped Marines collect toys for their Toys for Tots campaign 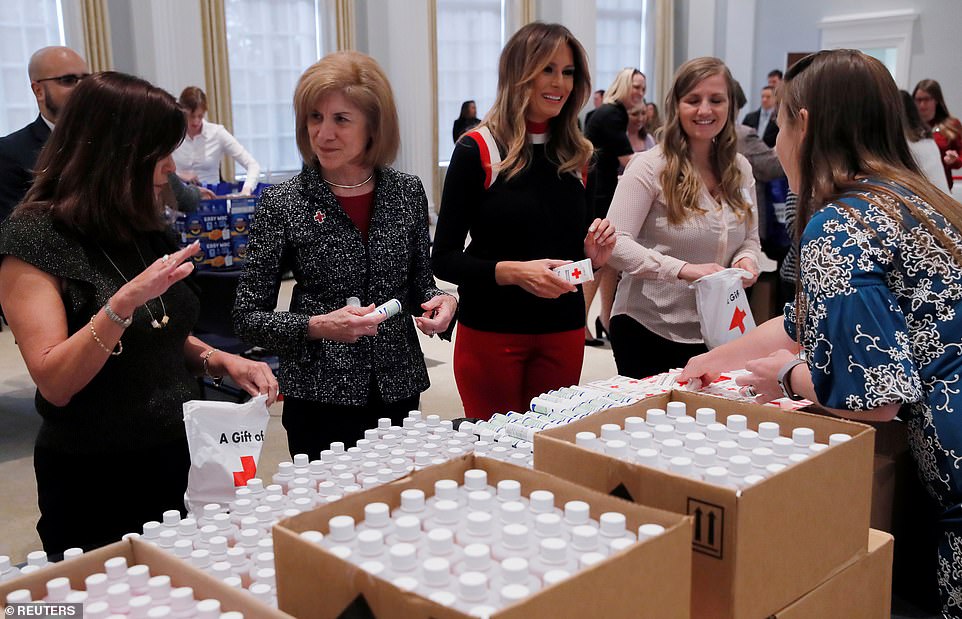 She took a picture with the group and then knelt down to chat with the kids.

She made conversation – asking them about Christmas – and exchanged high-fives with some of them.

After spending a few minutes with the youngsters, she left to tour an F-22A Raptor.

‘Bye bye,’ the kids yelled as she walked away.

She turned back to smile and wave at them.