Things may have been heated from the off between President Donald Trump and former Vice President Joe Biden at the first 2020 presidential debate – but that didn’t stop several eyes from turning to their incredibly chic wives, who both put on a very stylish display while supporting their spouses at the milestone event.

Melania, 50, looked like she was ready to get down to business in a $3,340 figure-flattering pinstripe suit from one of her favorite designers, Dolce & Gabbana.

Meanwhile Jill, 69, opted for a more classic look, donning a green silk dress that featured funky fringing detail on the front – a design that she was first snapped in back in October 2017 when she attended a fundraising event with her husband in New York City. 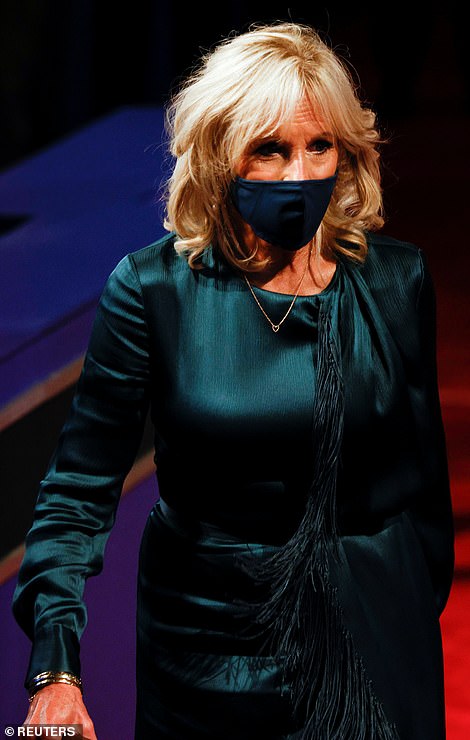 Style showdown: While their husbands took to the stage at the first 2020 presidential debate, Melania Trump and Jill Biden went head to head in a battle of fashion, with the two women wearing equally chic, but very different looks for the evening 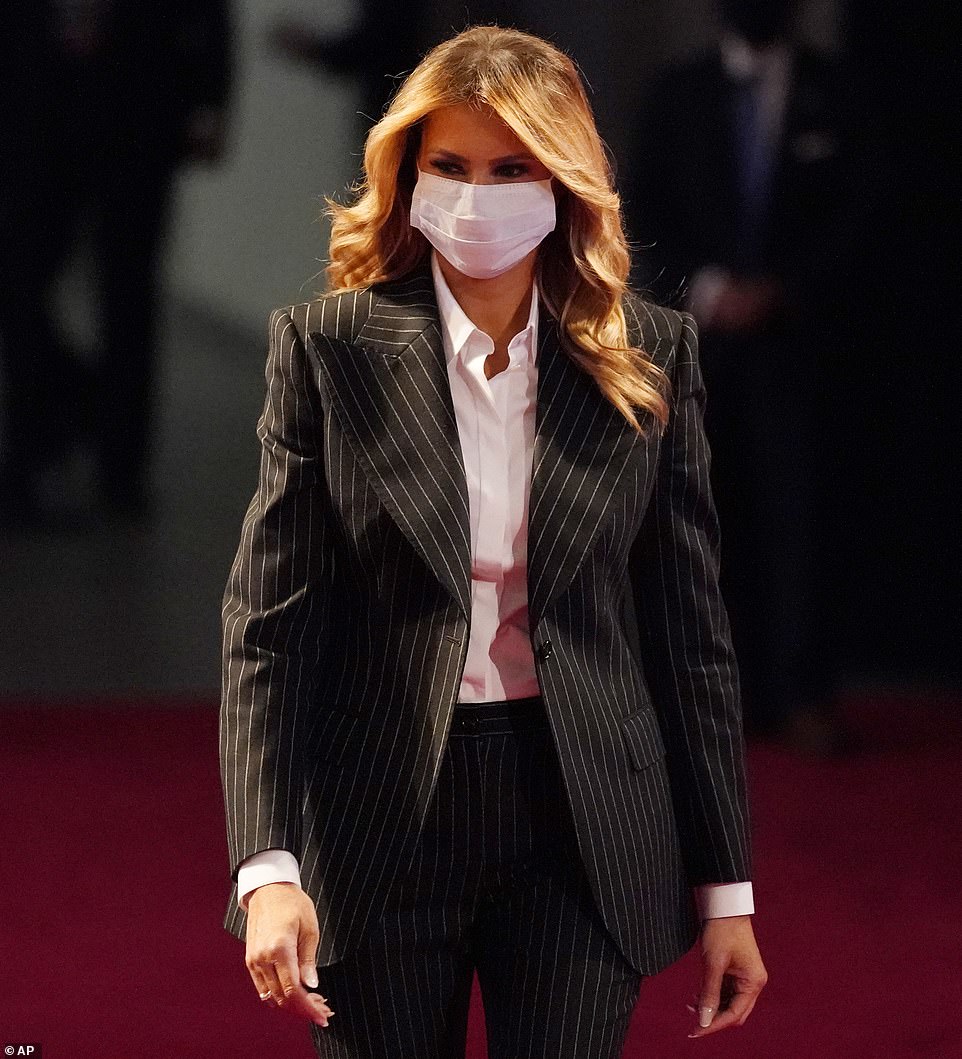 Slick: Melania, 50, opted for a chic $3,340 striped Dolce & Gabbana suit, which she paired with a crisp white button-up shirt 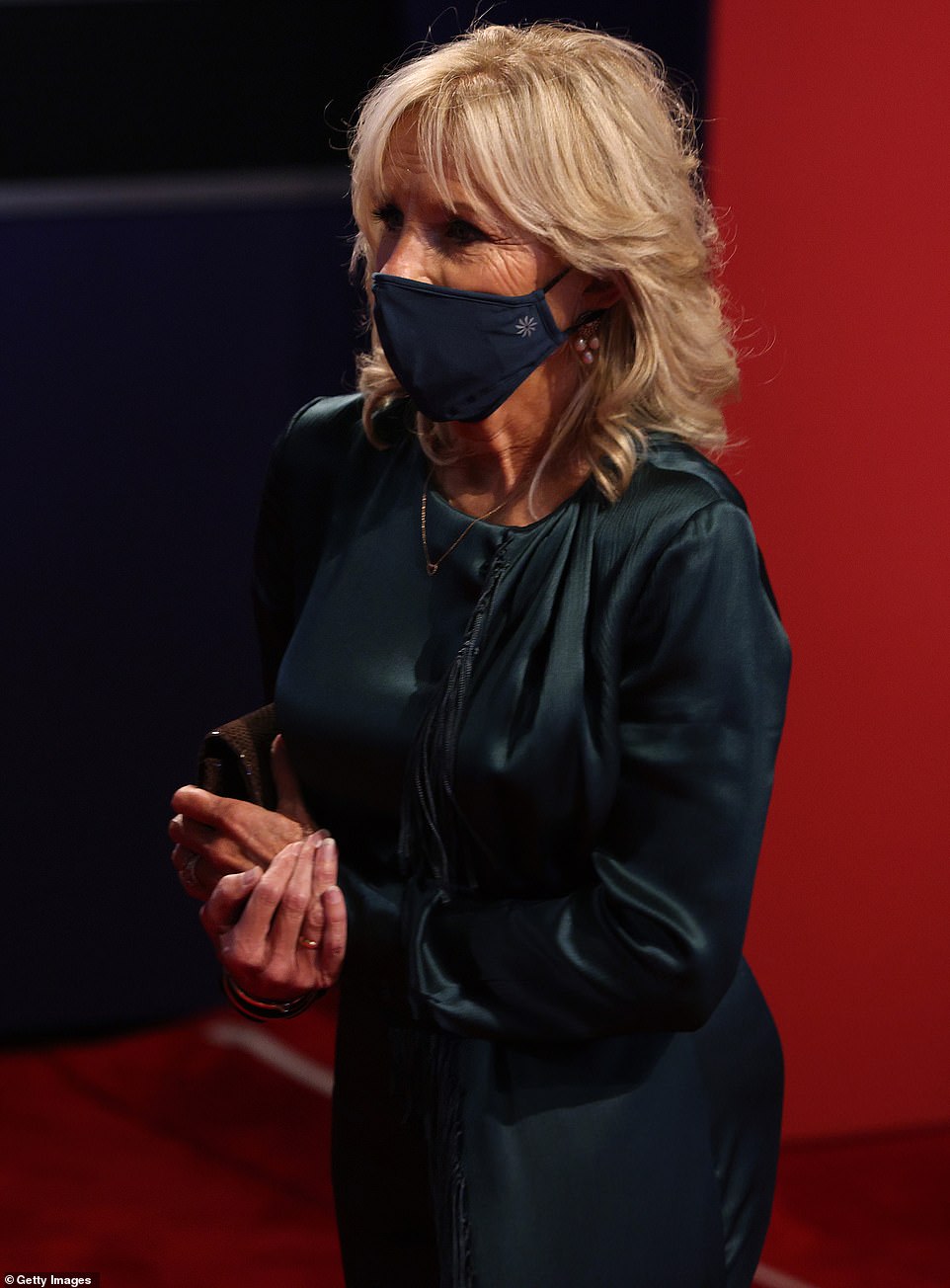 Glam: Meanwhile Jill, 69, went for a more classic look, opting for a long-sleeved green silk dress that featured some funky fringe detail on the front of it 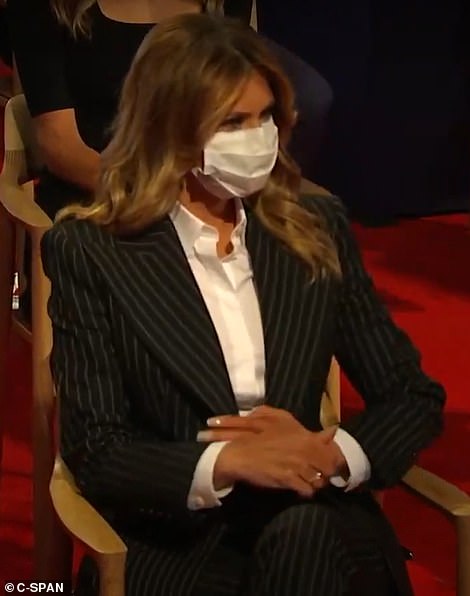 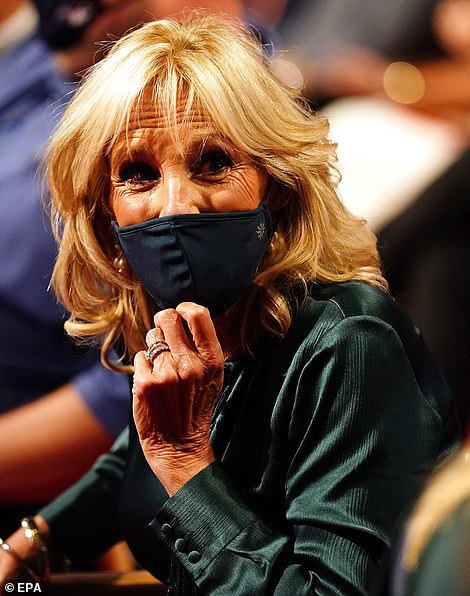 Safety first! While their styles may have been very different, the two women had one thing in common when it came to their looks – their protective face masks

But while the women may have chosen incredibly different designs for the evening, they had one clear style choice in common: face masks.

The First Lady opted for a disposable white face covering to match the white button-up that she wore under her suit, while Jill chose a dark green cloth design that was almost exactly the same shade as her fringed frock.

However it was there that sartorial similarities ended.

Melania, whose fashion choices have been the subject of much interest throughout her husband’s time in the White House, appeared as though she had dressed to complement the President’s style for this evening – mirroring his signature suit with her own fashion-forward spin on the look.

But while President Trump chose a navy design for the evening, Melania chose a black design with white pinstripes and sharp shoulder pads for added oomph, which she paired with a crisp white button-up shirt, and a pair of $695 sky-high Christian Louboutin heels.

While she covered half her face with a mask, the First Lady didn’t let that stop her from injected some great glamor into her beauty look, showing off her signature smokey eye above the protective covering. 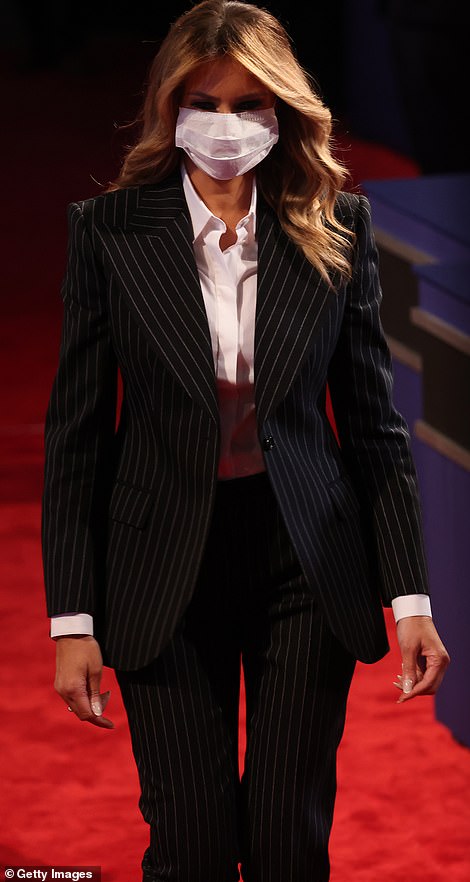 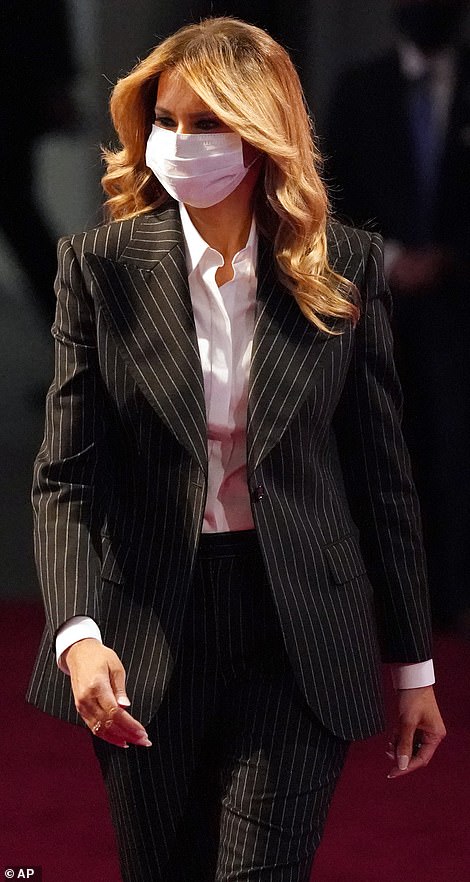 Going all out: Melania had her long brunette hair styled in her signature loose waves, and she also showed off her favorite smokey eye above her face mask 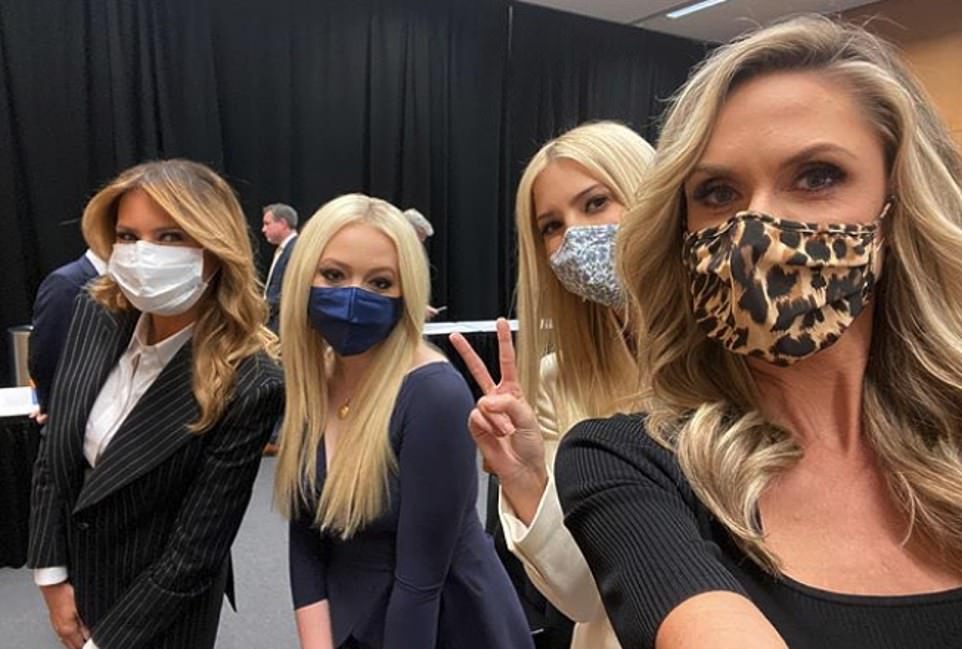 Say cheese! The First Lady showed off her ensemble ahead of the live televised debate while posing for a backstage selfie alongside her stepdaughters Ivanka and Tiffany, and her stepson Eric’s wife Lara 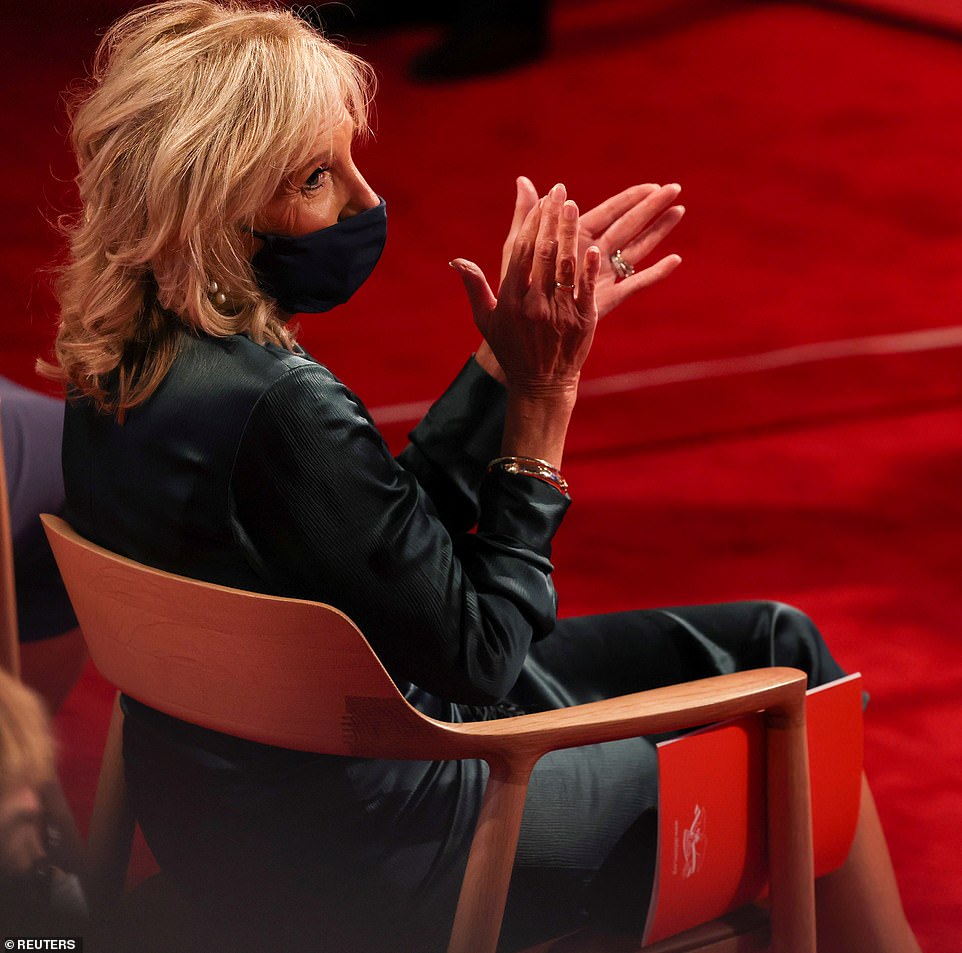 Debut: Jill was not seen in her outfit earlier in the day, when she was busy campaigning for her husband in Cleveland 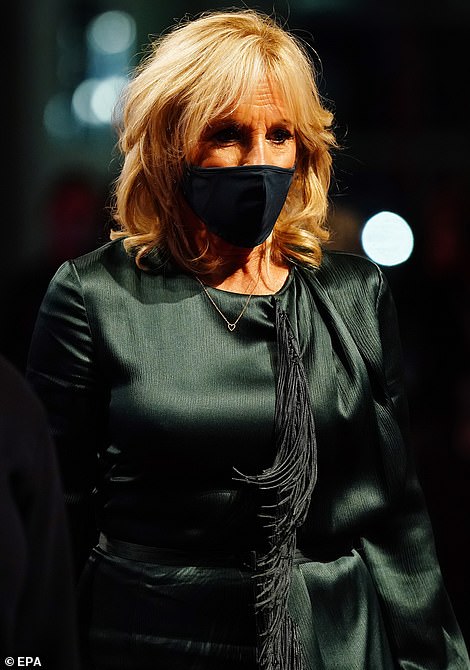 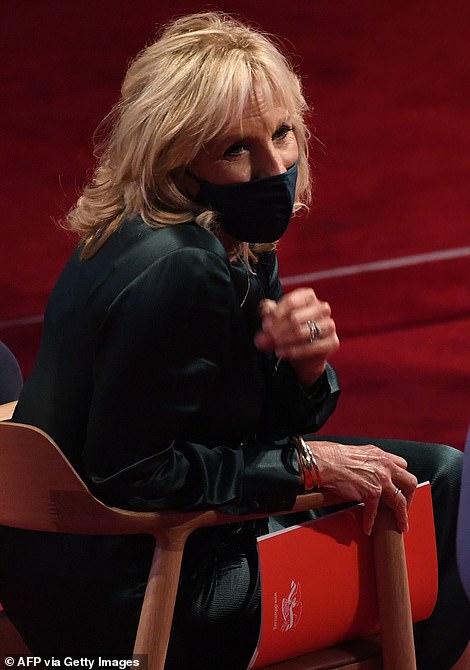 Golden girl: The wife of the former Vice President also went for a loose wavy style for her hair, and she was seen modeling plenty of mascara to highlight her eyes above her mask

Earlier in the evening, Melania had a chance to show off her glam for the evening to better effect when she was pictured boarding Air Force One with her husband as they prepared to fly to Cleveland for the event.

She also flaunted her fashion choice in a quick selfie snapped by her stepson Eric’s wife Lara that shows the two women posing happily alongside Donald’s daughters, Ivanka and Tiffany.

Jill on the other hand debuted her look at the debate itself, having spent the day campaigning for her husband in Cleveland, leaving him to travel to the event by himself, while she traveled ahead to try and drum up supporters for Joe.

However, longtime Biden supporters and followers will no doubt recognize the ensemble, which Jill has worn on a number of occasions in the past, including during an appearance on MSNBC in February of this year.

The design is clearly a favorite for the former Vice President wife, who was also pictured stepping out in the green dress back in October 2017, when she and Joe attended the 5th Annual Save The Children Illumination gala at The Museum of Natural History in New York City, where they rubbed shoulders with actress Jennifer Garner.

Like Melania, Jill chose to pull out all the stops with the glamour, wearing her blonde hair in chic waves, while her eyes were framed with several coats of mascara.

Unlike her counterpart, she chose to add several accessories to her look, including a few gold bangles around her wrist, and a simple gold necklace. Jill finished the look off with some statement earrings. 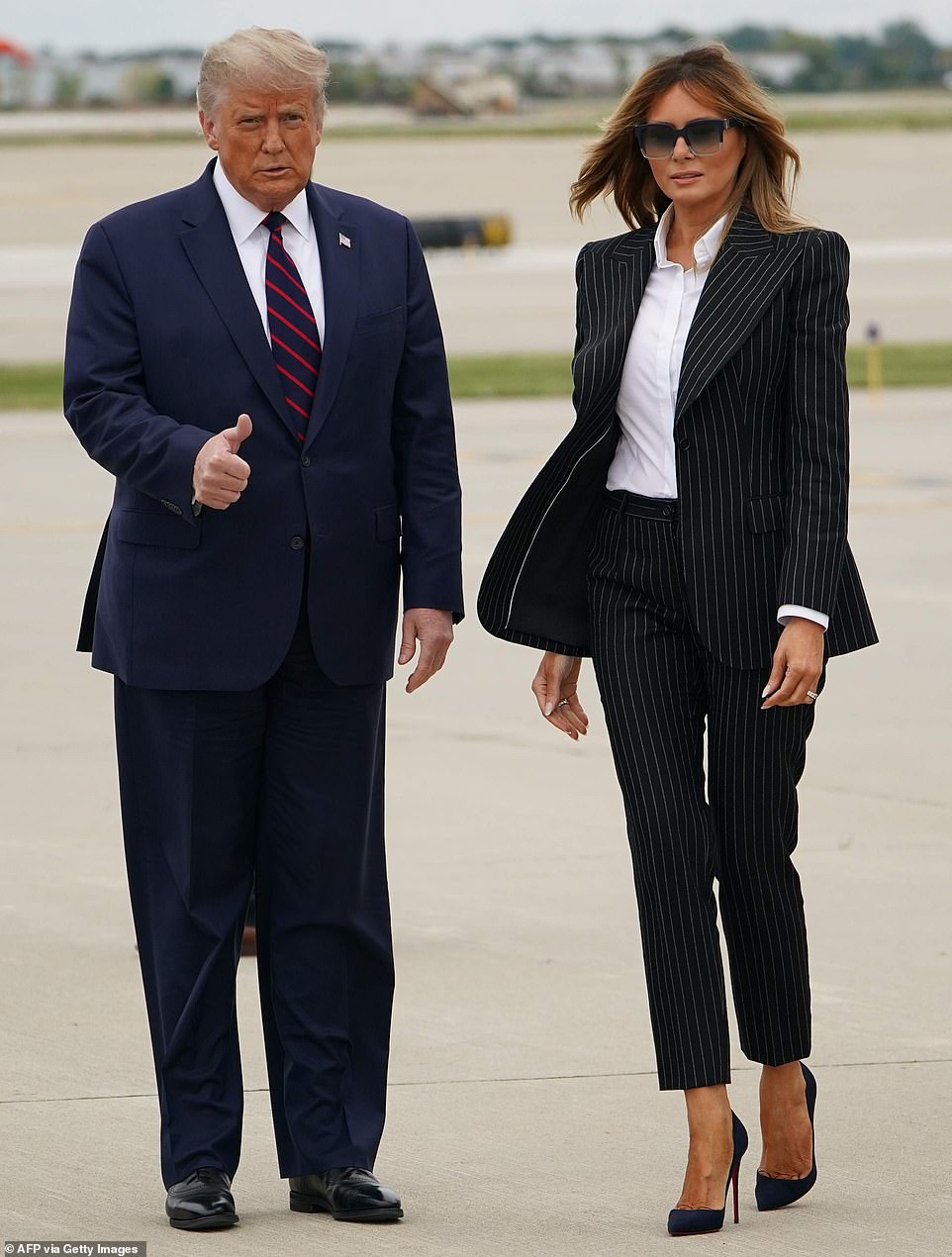 Accessories: Earlier in the day, Melania showed off her chic look on the tarmac at Cleveland Hopkins Airport, where she was seen disembarking Air Force One alongside her husband 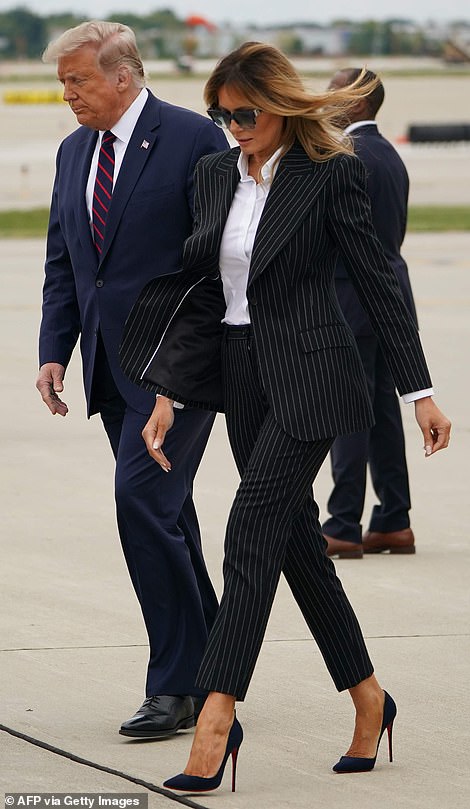 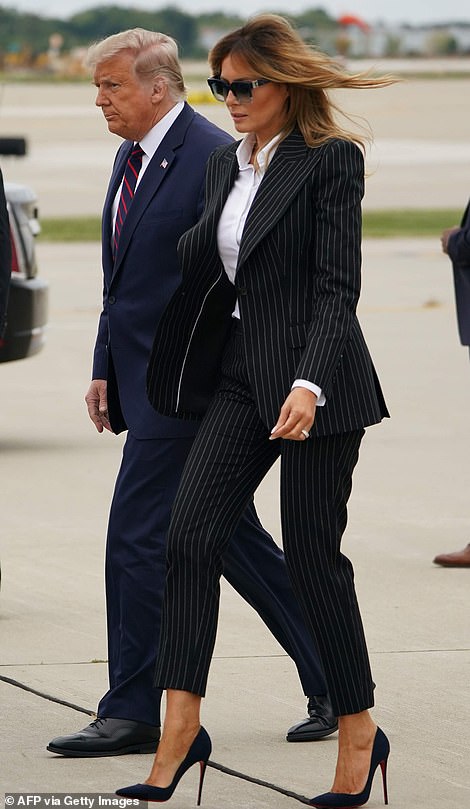 Switching things up: When she arrived in Cleveland, the First Lady was not seen wearing a face mask, however she was modeling an oversized pair of sunglasses 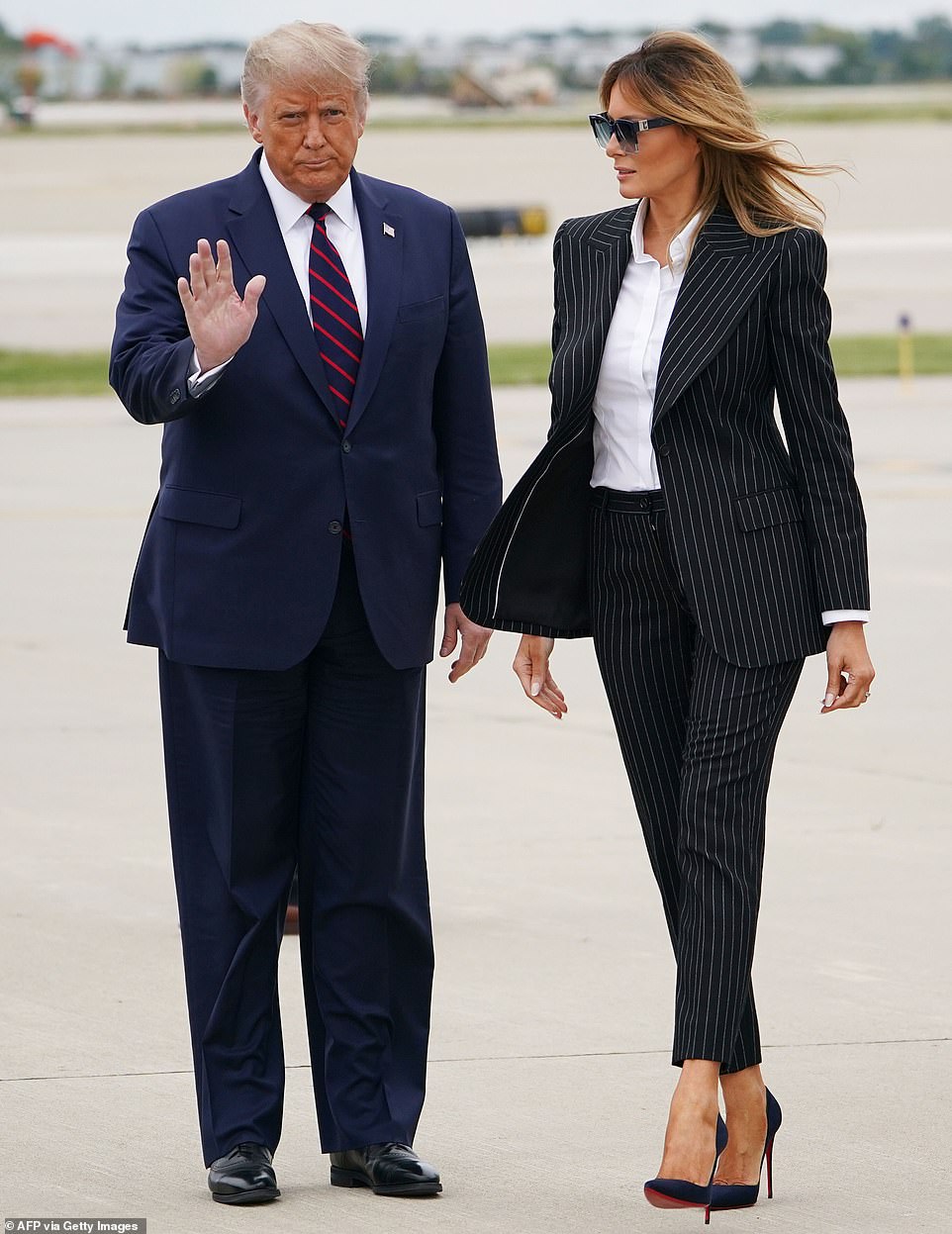 Sky-high: The mother-of-one wore a pair of chic $695 Christian Louboutin heels with her suit look