Melania Trump appeared on CNN Thursday to tell students she is ‘proud’ of their ‘determination’ to get through the pandemic which will ‘define their generation for years to come’.

Speaking on the network blasted her husband, President Donald Trump, as ‘fake news’, the First Lady acknowledged the ‘many changes’ students have had to make since the outbreak of coronavirus shuttered schools and colleges.

Trump appeared in a pre-taped segment on the network’s weekly global town hall on coronavirus, which is hosted by Anderson Cooper, a frequent critic of the president.

It was her first solo broadcast to the nation since the onset of the pandemic.

Acknowledging the ‘unusual times’ she urged student to ‘take care of yourselves’ by reading books, playing or learning a sport and helping out at home.

The First Lady said: ‘ These changes were not easy but you have been so strong and I am proud of the examples you have become. Your determination to get through this will define your generation for years to come.

‘We will only get through this with patience, compassion and care.’

Thanking students for their help in keeping ‘your communities and our country to stay healthy’, she added: ‘Tonight, please know, that the president and I are with you during these challenging times and we continue to do everything we can to support you.’

The First Lady’s Be Best program focuses on the well being of children and she also addressed children’s health in a call Wednesday with approximately 3,000 state, local, and tribal officials.

‘Whether in quarantine or on the front lines of the fight against the virus, many Americans – including children – are experiencing an increase in anxiety, depression, loneliness, isolation, and fear, ‘ she said in remarks released by her office.

The president, meanwhile, is a frequent critic of CNN, both on Twitter and in person.

He criticized the network again on Wednesday, when White House reporter Kaitlan Collins asked him about a report he was angry with the Centers for Disease Control and Prevention.

‘It’s fake news, Kaitlan. Fake news. Therefore, you can report it on CNN,’ the president told her.

He has targeted Collins before. During a press briefing at the end of April, when she tried to ask him if he’s had contact with Kim Jong Un, amid reports the North Korean leader was ill or dead, he shot her down.

Melania Trump has recorded several PSAs during the pandemic, where she has offered tips on getting through the pandemic and urged Americans to follow CDC guidelines on the matter.

She ordered her staff to work from home from the early days of the pandemic and implored American to wear masks.

Her office released a photo of her wearing a face covering but she has not sported one in her public events in the past month, when she has been a silence presence at her husband’s side as he planted a tree on the White House South Lawn, hosted faith leaders for National Day of Prayer, honored veterans at the World War II Memorial, and rewarded girl scouts and others at a White House recognition ceremony for those who have aided in the coronavirus response. 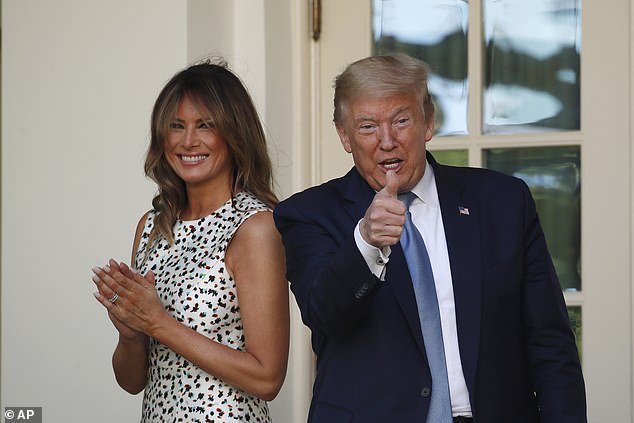 Melania appeared in a pre-taped segment on CNN’s weekly global town hall They were her first solo remarks since the onset of the pandemic. She is pictured with the president on Friday 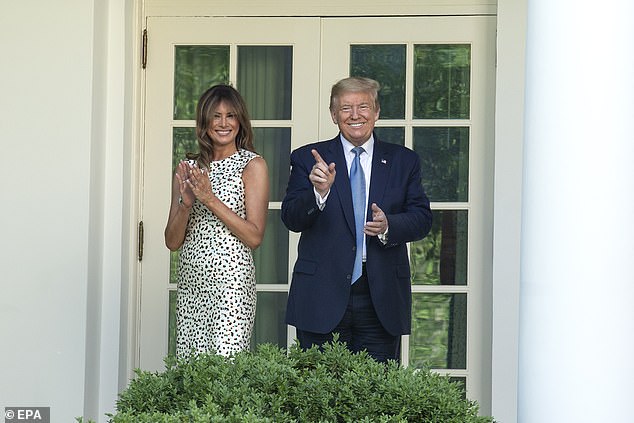 Acknowledging the ‘unusual times’ Melania, pictured last week, urged student to ‘take care of yourselves’ by reading books, playing or learning a sport and helping out at home

Melania has warned Americans that as the country reopens to continue to practice social distancing and wear masks.

‘As some states slowly start to open businesses, please be sure to check CDC guidelines, continue to practice social distancing & wear a face cover. We need to make sure we slowly get back to normal while still fighting to keep the virus suppressed,’ the first lady tweeted at the end of April.

Former President Barack Obama on Saturday criticized President Donald Trump in all but name as he gave a televised commencement address for high school seniors.

Obama’s message to graduating high school students came at the end of an hourlong television special.

Obama panned ‘so-called grown-ups, including some with fancy titles and important jobs’ who do ‘what feels good, what’s convenient, what’s easy.’

‘That’s how little kids think,’ he added, ‘which is why things are so screwed up.’ 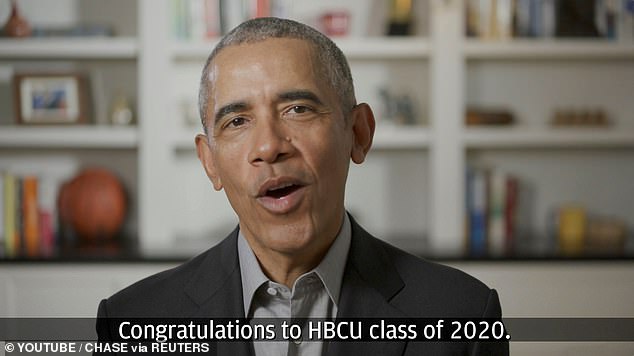 The 44th President did not mention Trump by name, but there was no mistaking who he meant.

Earlier on Saturday, Obama gave another commencement address online, in which he claimed that the pandemic showed many officials were not ‘even pretending to be in charge.’

Obama spoke on ‘Show Me Your Walk, HBCU Edition,’ a two-hour event for students graduating from historically black colleges and universities, which was broadcast on YouTube, Facebook and Twitter.

His remarks were unexpectedly political, given the venue, and touched on current events beyond the virus and its social and economic impacts.