Melania Trump kept warm in a $9,400 Dior coat while attending the National Thanksgiving Turkey pardoning at the White House on Tuesday.

The 48-year-old first lady wore the coat over a black top and pants, topping off her pricey designer look with a pair of over-the-knee Christian Louboutin boots.

Outfit of the day: Melania Trump, 48, donned a $9,400 Dior coat to attend the National Thanksgiving Turkey pardoning at the White House on Tuesday 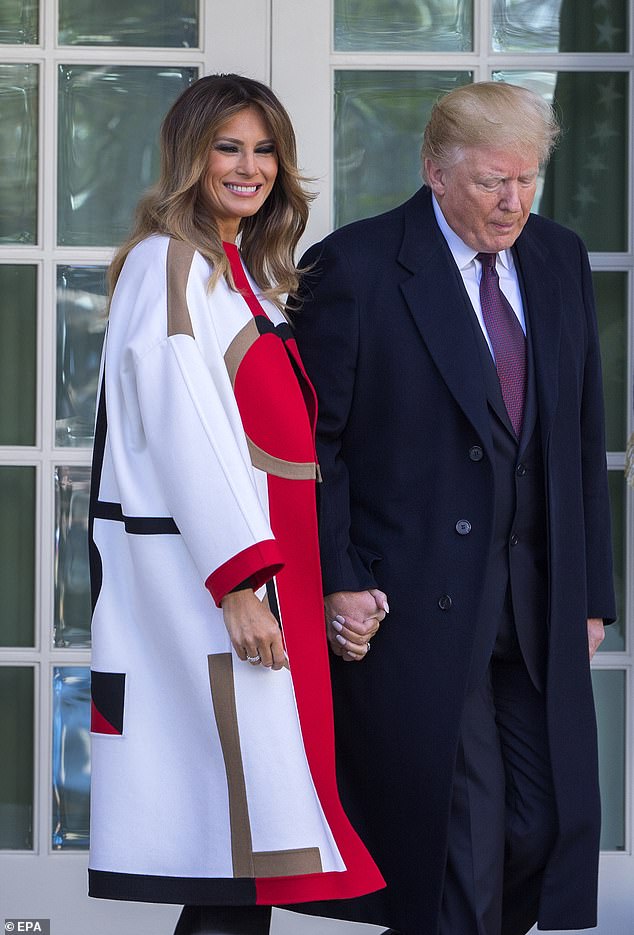 With Thanksgiving just a few days away, Melania looked ready for the holiday in her colorful outerwear, which matched the fall foliage in Washington, D.C.

She let her eye-catching coat take center stage, opting for minimal accessories aside from her diamond wedding band.

As for her hair, Melania stuck with her signature style and wore her highlighted brown locks in loose waves around her shoulders.

The first lady and her husband, President Donald Trump, held hands while walking through the Colonnade ahead of the ceremony, which was held in the Rose Garden.

Melania stood by Trump’s side as he pet the turkey, but she kept her hands clasped together and refrained from touching the bird. 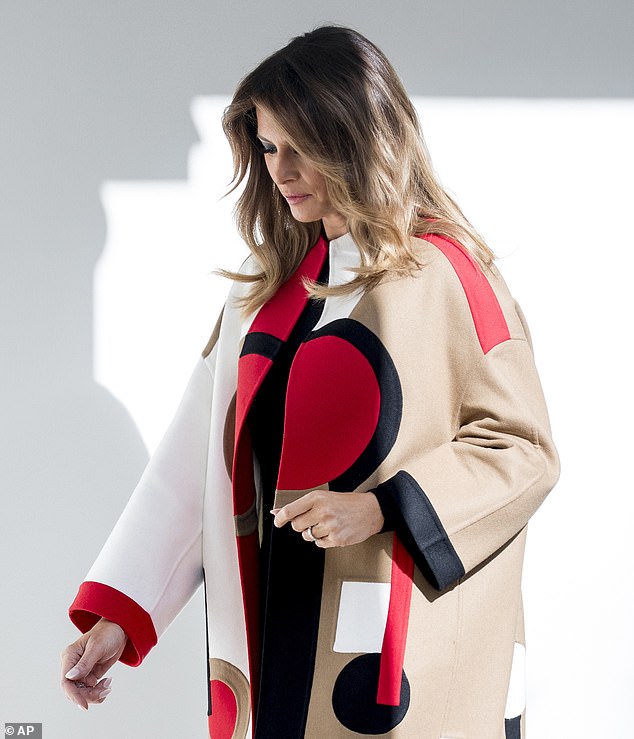 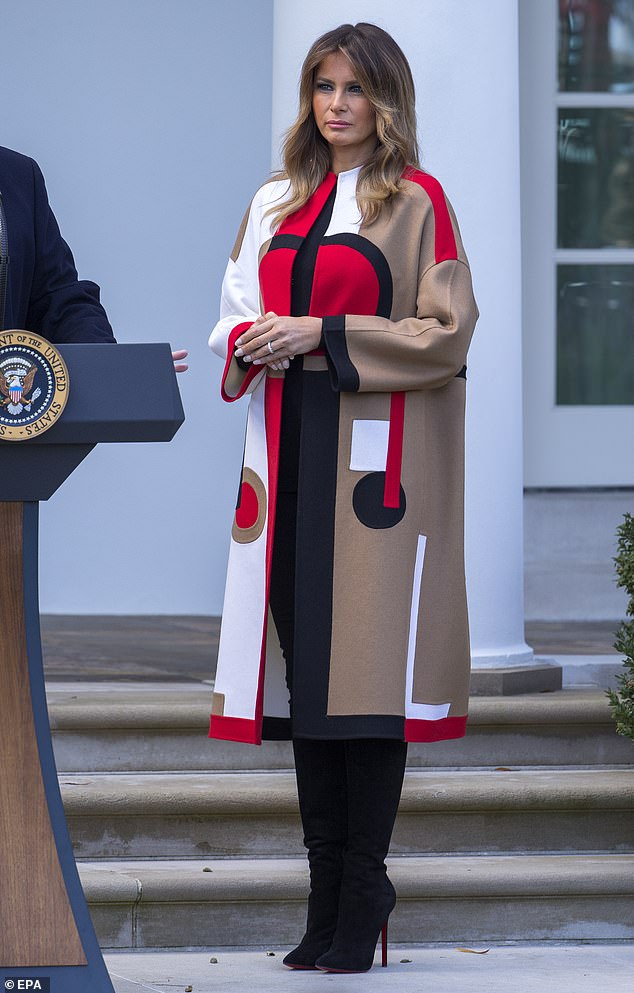 Style: Melania wore the coat over a black top and pants, topping off her pricey designer look with a pair of Christian Louboutin boots 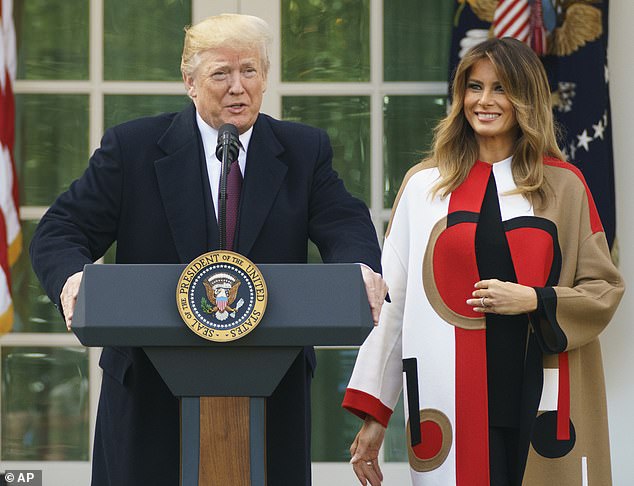 Signature: Melania wore her highlighted brown locks in loose waves around her shoulders

The president pardoned Peas the Thanksgiving turkey on Tuesday in a ceremony filled with tongue-in-cheek jokes about vote counting, recounts, subpoenas, and judicial power.

‘I am pleased to announce that today’s lucky bird and guest of honor is named Peas along with his alternate named Carrots,’ Trump said with his wife at his side.

‘The winner of this vote was decided by a fair and open election conducted on the White House website. This was a fair election,’ he joked. ‘Unfortunately, Carrots refused to concede and demanded a recount and we are fighting with Carrots.

‘We have come to a conclusion. Carrots, I’m sorry to tell you the result did not change. Too bad for Carrots.’

The president also got in a few jokes about the recent midterm election, which saw Democrats win control of the House of Representatives and the state of Florida undergo a lengthy recount process. 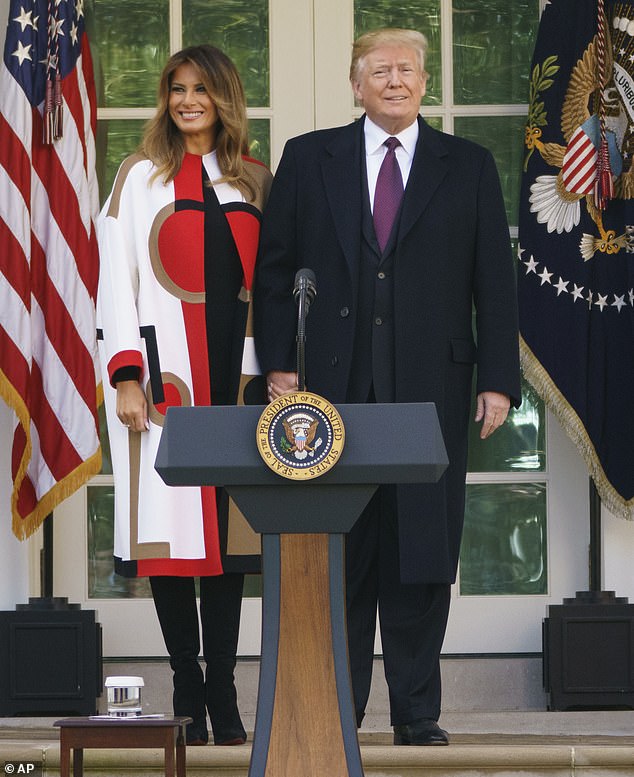 In good spirits: Melania had a bright smile on her face when she and her husband, President Donald Trump, arrived in the White House Rose Garden for the pardoning 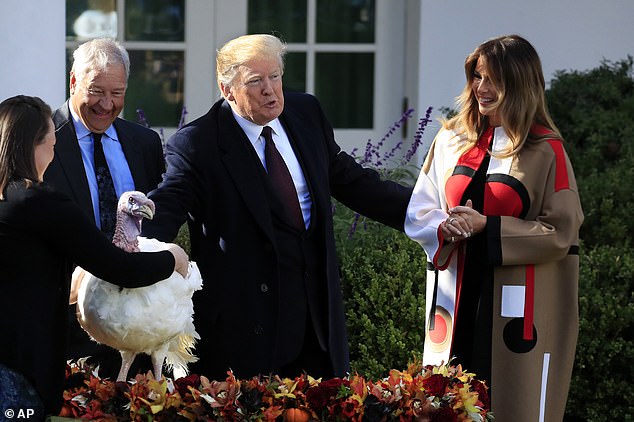 Not for her: Melania stood by Trump’s side as he pet the turkey, but she kept her hands clasped together and refrained from touching the bird 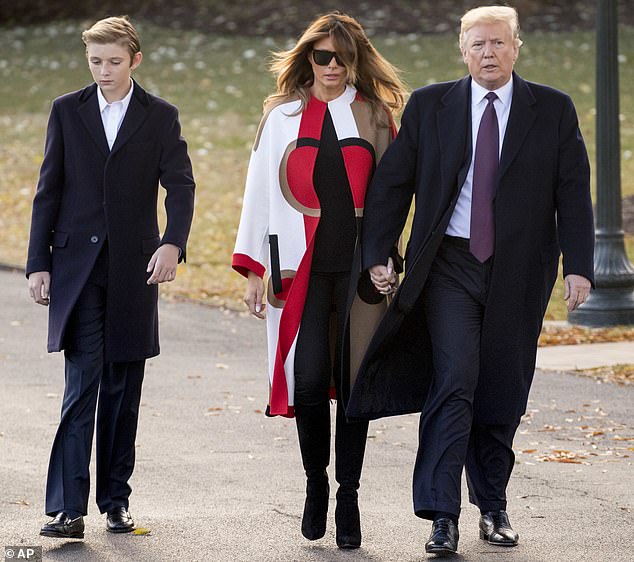 On the go: After the ceremony, the couple and their 12-year-old son, Barron, were seen boarding Marine One on the South Lawn of the White House

‘Even though Peas and Carrots have received a presidential pardon, I have warned them that House Democrats are likely to issue them both subpoenas,’ he said.

‘None the less in the spirit of Thanksgiving, I will be issuing both Peas and Carrots a presidential pardon. Unfortunately. I can’t guarantee that they won’t be enjoined by the ninth circuit. Always happens. They are guaranteed,’ he added. ‘All joking aside, this is a time for Americans to unite together.’

The birds are the first from South Dakota to be given a presidential pardon.

Melania and her husband walked hand-in-hand as they left the Rose Garden after the ceremony ended.

The Trump family typically spends the Thanksgiving holiday at the president’s Mar-a-Lago estate in Palm Beach, Florida, and this year is no exception. 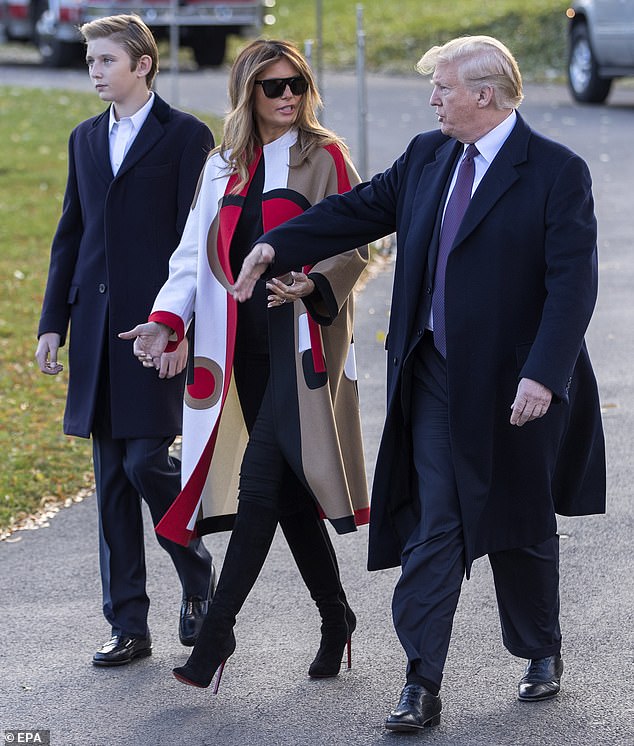 Leaving: The Trump family is spending the Thanksgiving holiday at the president’s Mar-a-Lago estate in Palm Beach, Florida 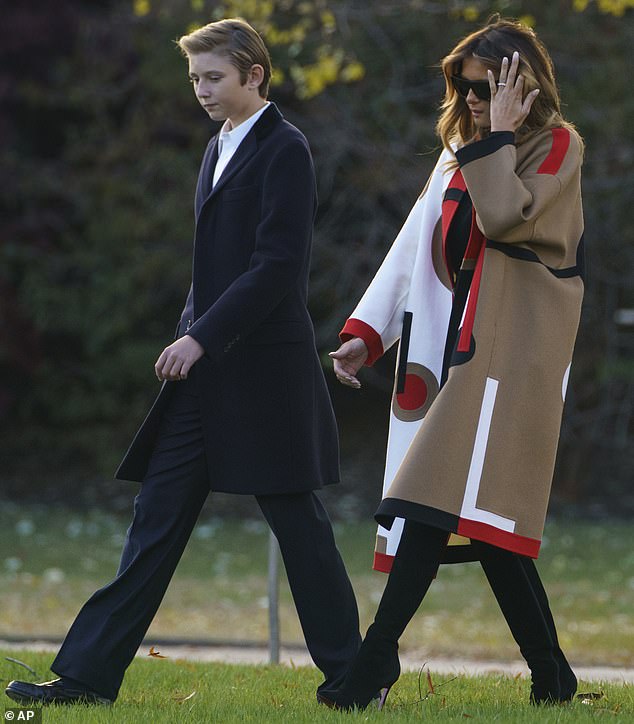 Bonding: At one point, Melania was seen walking alongside of her only child 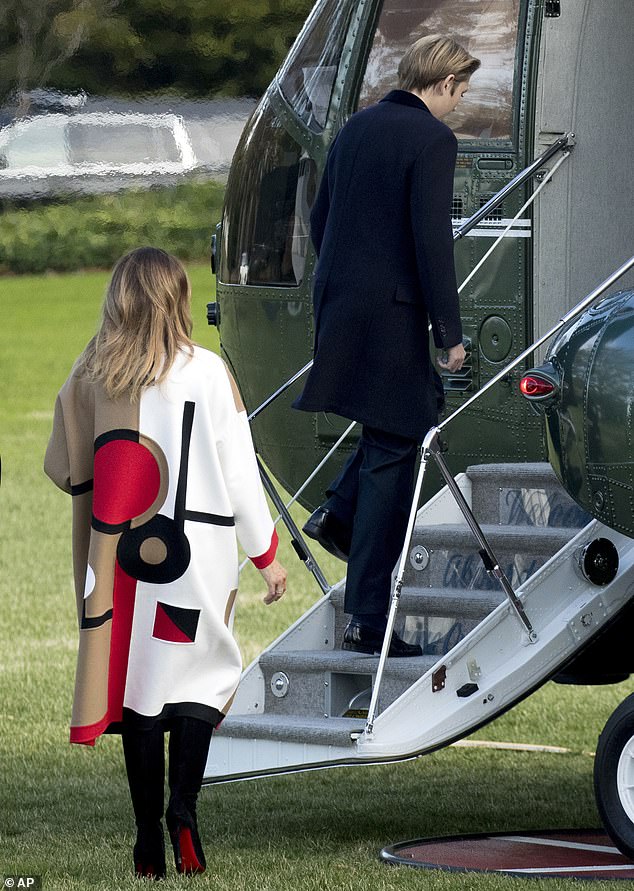 Doting mom: Melania let her son board Marine One first, following close behind 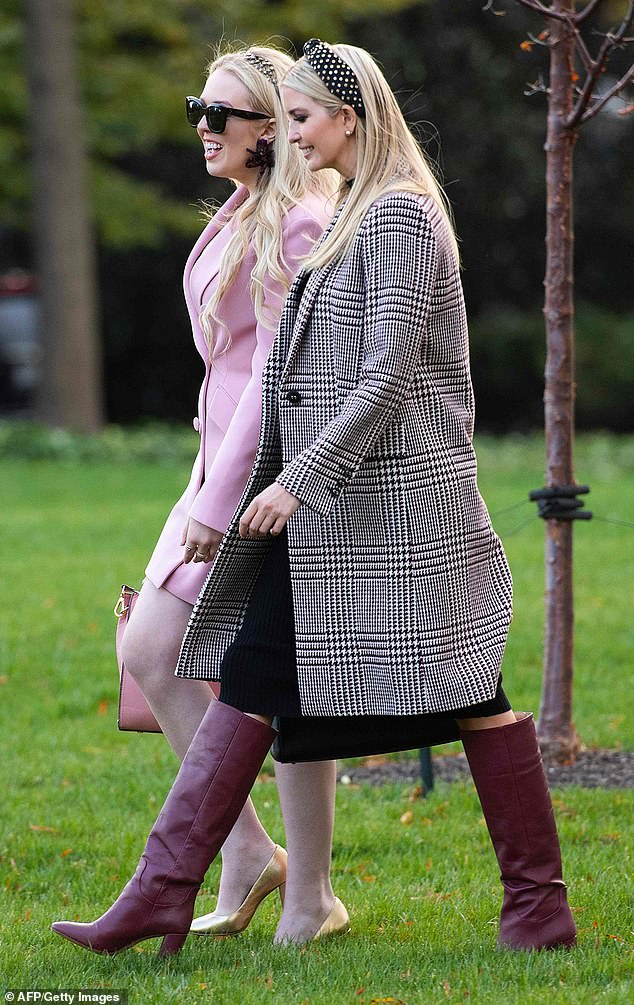 After the turkey pardoning, the couple was seen walking across the South Lawn of the White House with their 12-year-old son, Barron, ahead of their flight to Florida.

Barron, who is nearly as tall as his six-foot-three father, looked just like him in a dark wool coat and dress pants.

Melania had on the same Dior coat that she wore to the ceremony earlier in the day as she made her way to Marine One with her husband and son.

Trump’s youngest daughter, Tiffany, was also seen walking across the South Lawn with her sister, Ivanka, though it appears as though she missed the turkey pardoning.

The 25-year-old law student at Georgetown University wore a bubblegum pink peacoat over a short pink lace dress that showed off her bare legs. 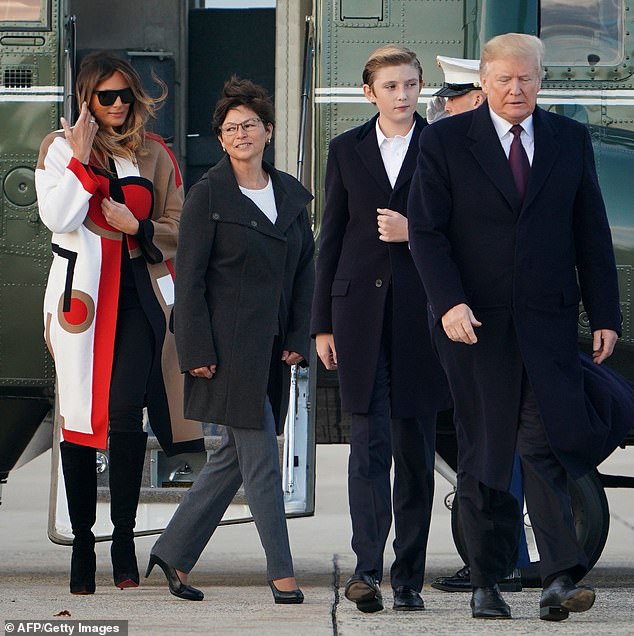 Matching: Barron, who is nearly as tall as his six-foot-three father, looked just like him in a dark wool coat and dress pants 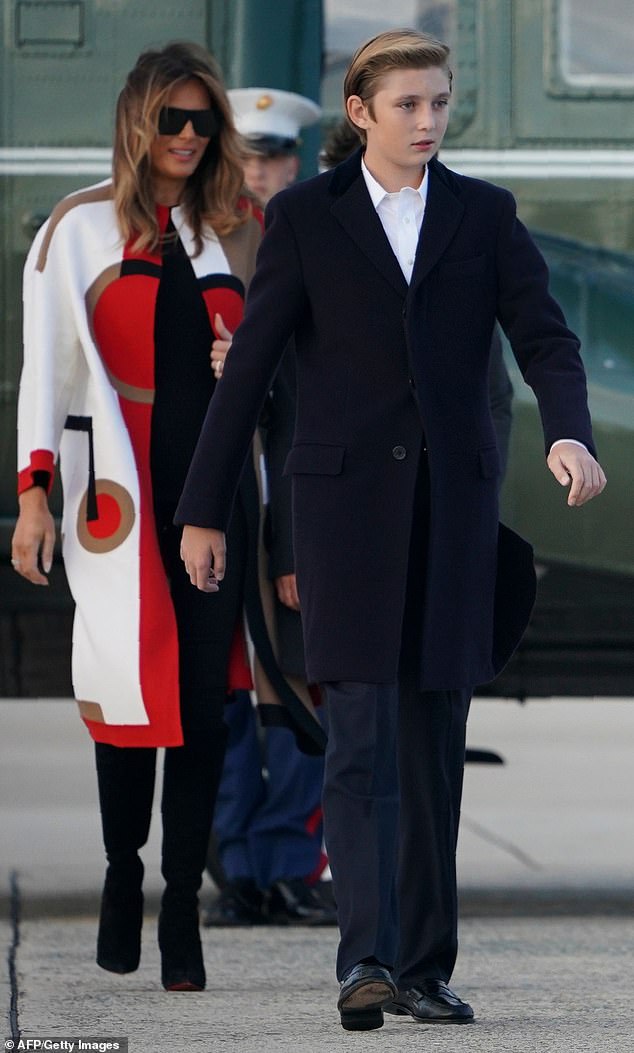 Next stop: After landing at Joint Base Andrews, the family walked across the tarmac and made their way to Air Force One 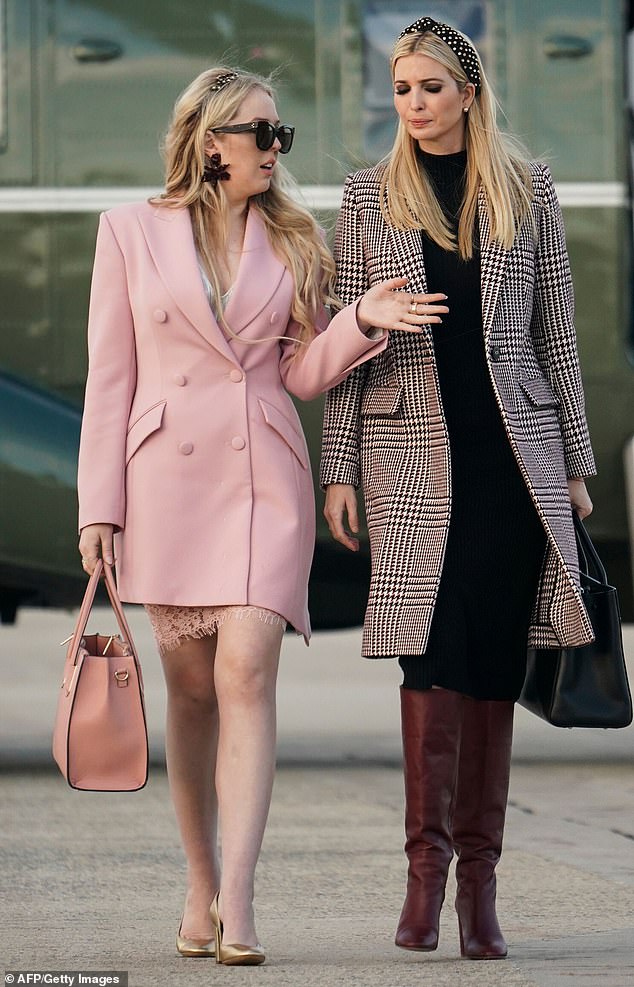 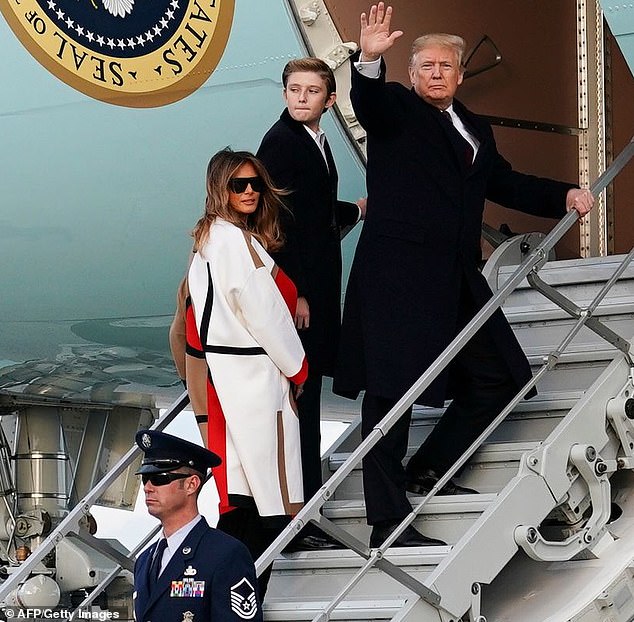 Goodbye! Trump gave a wave as he boarded Air Force One ahead of their flight to Florida

The pumps appeared to be new as the price sticker could be seen on the bottom of her one of her shoes.

Tiffany carried a large handbag that was a slightly different shade of pink than her wool coat.

Meanwhile, Ivanka, 37, had on the same plaid coat and burgundy knee-length leather boots she wore to watch the turkey pardon with her husband, Jared Kushner, and their three children, Arabella, Joseph, and Theodore.

It’s unclear if her husband and children also joined them on the flight.

After their Marine One flight to Joint Base Andrews in Maryland, the family boarded Air Force One and headed to Florida.