Melania Trump is known for being particular fashion-forward with her style choices – but on Wednesday the first lady opted for a fashion flashback when she recycled a $595 military jacket during her trip to Ghana.

The 48-year-old, who is currently on the second official day of her Africa tour, stepped out wearing a Veronica Beard design that she first modeled back in September 2017 during a trip to Joint Base Andrews in Maryland with her husband.

Melania was clearly very fond of last year’s look, because she paired the jacket with a near-identical ensemble for her trip to Cape Coast Castle, a former slave trading fort that is located around 90 miles from the Ghanaian capital of Accra.

Old favorite: Melania Trump stepped out in Ghana on Wednesday (left) in a recycled $595 Veronica Beard military jacket that she first wore back in September 2017 (right) 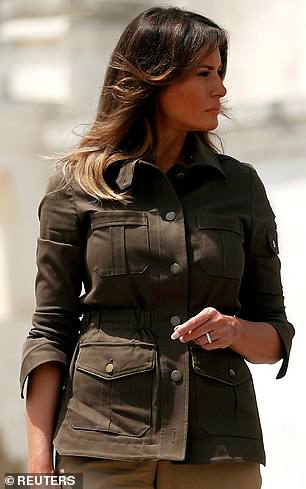 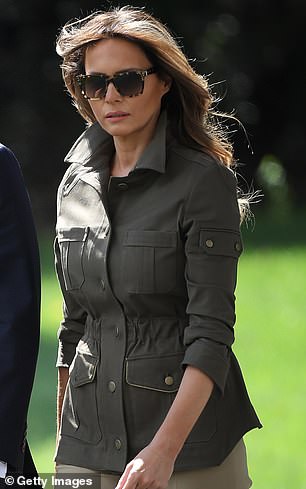 Seeing double: The 48-year-old wore the design while touring the Cape Coast Castle on day two of her Africa tour (left) having first modeled it during a visit to Joint Base Andrews (right)

Much like she did in 2017, Melania wore the designer item with a pair of cropped khaki cigarette pants, and snakeskin footwear – however she traded the pricey Manolo Blahnik heels she wore last year in favor of some budget-friendly $49.95 loafers from Zara.

In fact, the first lady went out of her way to make her outfit look more like last year’s version; for her first outing on Wednesday morning, which saw her paying a visit to local chiefs in order to get permission to visit the castle, Melania had accessorized the jacket with a thick leather belt.

However by the time she reached Cape Coast Castle, the mother-of-one had removed the addition to the look, leaving it free from any accessories, save for her diamond wedding band.

She was also seen wearing a pair of her favorite Manolo Blahnik heels first thing in the morning – however she changed out of the sky high pumps and into the low-priced flats by the time she reached the 17th Century castle, no doubt in order to ensure she could enjoy the walking tour without worrying about her feet.

Melania did make one change to the look however; having chosen to pop the collar of the jacket for her visit to the military base last year, the first lady opted to wear it down in a more conservative style while touring the castle. 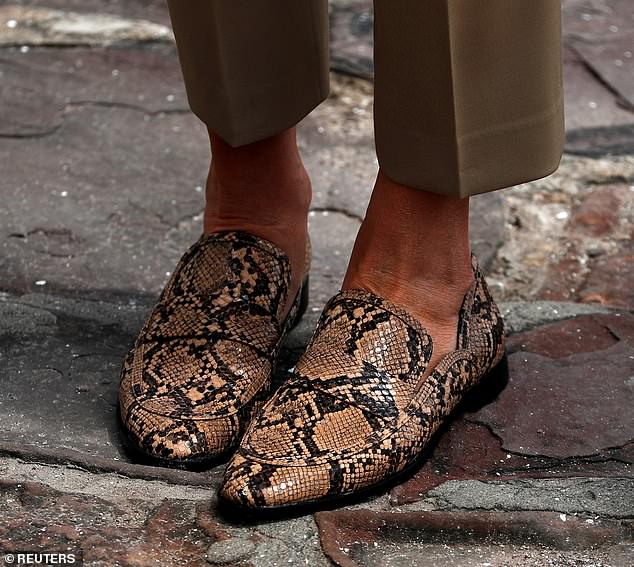 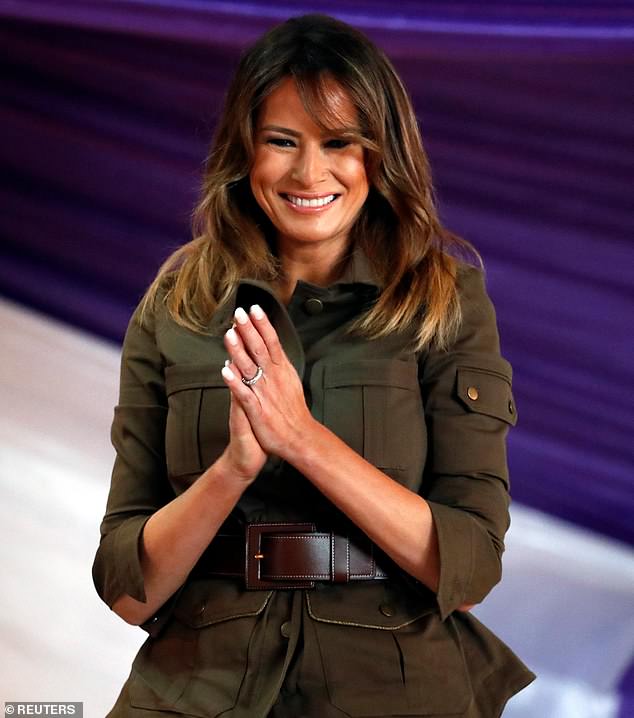 Outfit change: The first lady had actually paired the jacket with a thick leather belt, which she was seen wearing when she was first pictured on Wednesday, but she later removed it 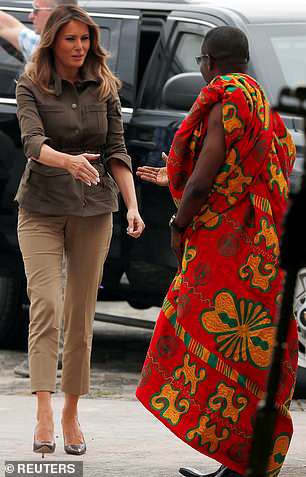 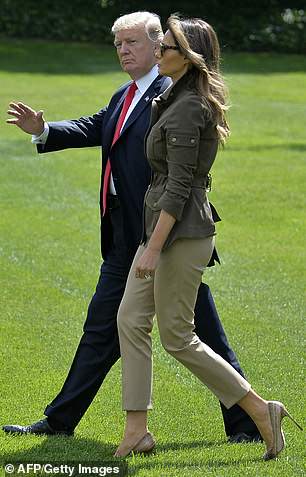 Quick switch: Melania, pictured left on Wednesday and right in 2017, paired the jacket with a near-identical ensemble of khaki cigarette pants and Manolo Blahnik heels – however she changed out of the heels before heading to the castle

While speaking about her experience on Wednesday, the first lady said she was ‘very emotional’ during her visit to the historic site, and described it as something she would ‘never forget’.

The castle is one of dozens scattered along Africa’s Gold Coast which was originally built by European traders but then used to house slaves in dungeons before shipping them overseas.

They are characterized by what was referred to as a ‘door of no return’ – an archway on the seaboard side of the castle which slaves were forced to walk through to be lowered onto boats and taken to cargo ships.

Melania, who has so far spent her time in Africa visiting children in schools and hospital patients, said the castle is ‘really something that people should see and experience.’

She added that it was a ‘special place’. 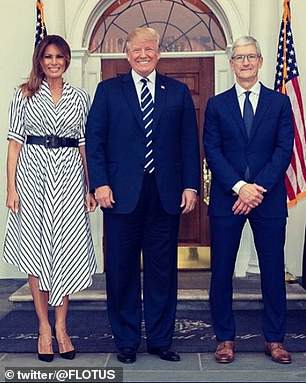 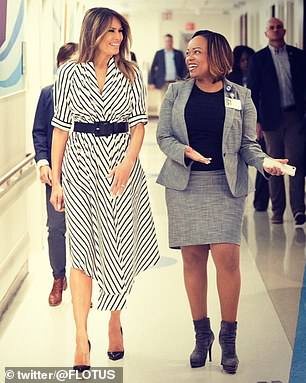 Firm fashion favorites: In July of this year, she recycled a $1,280 Adam Lippes dress, wearing it to a White House dinner with Apple CEO Tim Cook (left), having first worn it in March (right)

Although it happens rarely, this is not the first time that Melania has recycled one of her fashion favorites.

In August of this year, Melania re-wore a $1,280 striped shirt dress by designer Adam Lippes, having first stepped out in the number back in March during a visit to Palm Beach’s St. Mary’s Medical Center, where she delivered Easter baskets to young children.

Meanwhile back in July 2017, the first lady was seen wearing a Michael Kors dress that she also modeled in 2016 while out on the campaign trail with her husband, Donald Trump. She repeated the look while enjoying an evening celebration with her East Wing interns at the end of their time at the White House.

The most surprising fashion repeat however was in March 2017, when Melania wore the same $3,000 Valentino dress two days in a row – first modeling it in the Oval Office, while supporting her husband as he signed a new bill aimed at encouraging women to pursue careers in science, technology, engineering and mathematics (STEM).

She then donned it again the following day before going to visit a local children’s hospital, where she spent time meeting some of the patients.