Melania Trump wears flannel to garden at the White House

Melania Trump is known for making a glamorous appearance wherever she goes, but on Friday the first lady got her hands dirty while doing a bit of gardening at the White House.

The 47-year-old was joined by students from the Boys and Girls Club of Washington, D.C. while harvesting and planting vegetables in the White House Kitchen Garden, which was started by former First Lady Michelle Obama.

Melania looked ready for the first day of fall in a red plaid button-down shirt featuring gold buttons and dark skinny jeans for the day of gardening on the South Lawn.

Melania Trump harvested and planted vegetables in the White House Kitchen Garden on Friday with students from the Boys and Girls Club of Washington, D.C. 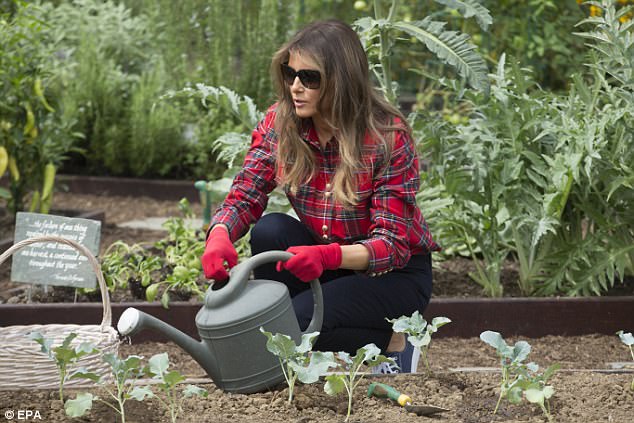 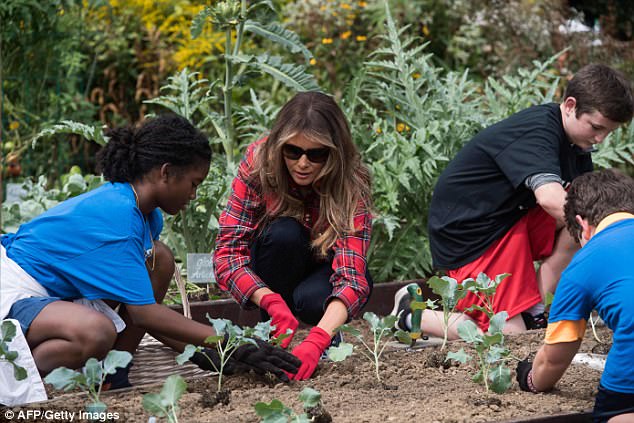 Despite the temperature being in the low 80s, Melania opted to wear her hair down around her shoulders

The former model topped off the outfit with #50 blue Converse Chuck Taylor All Star sneakers, designer shades, and, of course, red gardening gloves.

Although the temperature in D.C. was in the low 80s, Melania looked as cool as cucumber in her long-sleeve top.

Melania also opted to wear her highlighted brown hair down and loose around her shoulders.

Ahead of the event, the first lady’s office said the group was expected to harvest arugula, peas, radishes and Swiss chard while planting cabbage, cauliflower, turnips, carrots, kale, spinach and lettuce. 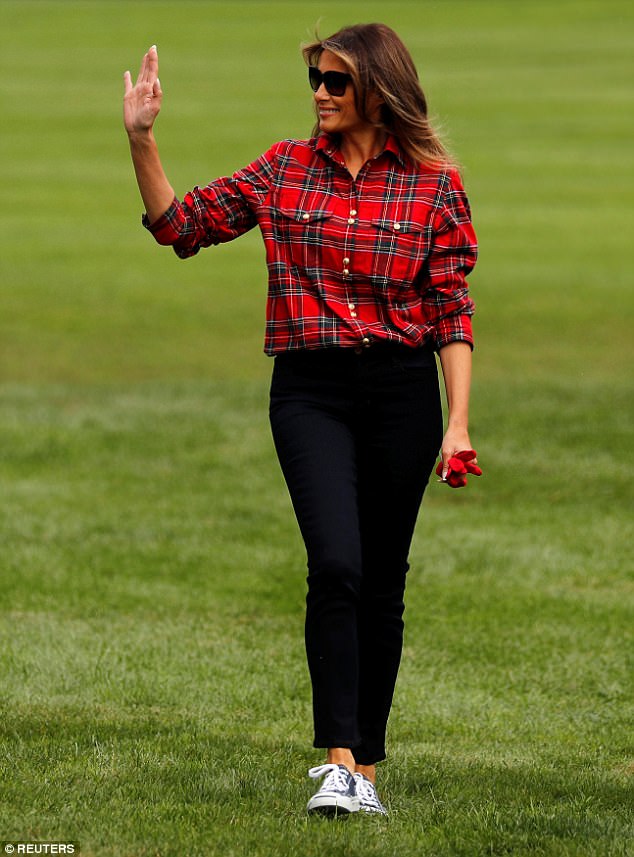 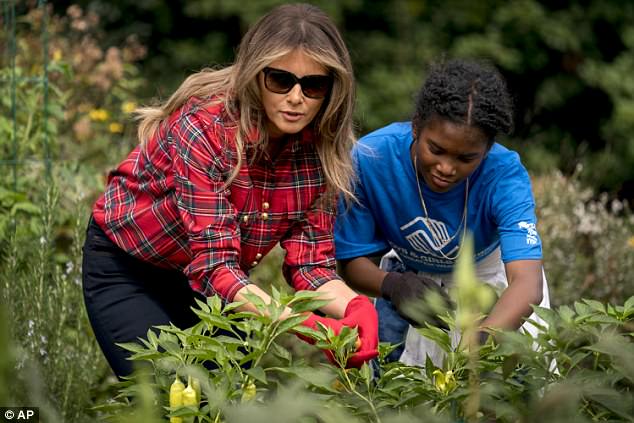 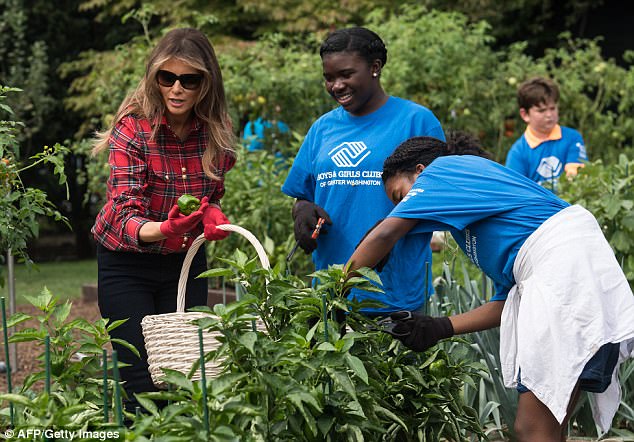 Melania happily picked pepper with the students while in the garden, which is located on the White House South Lawn

Most would assume Melania didn’t do too much gardening when she and President Trump lived in New York City, but she looked right at home while working alongside the children.

Photos from the day see Melania bent over as she picked peppers and placed them in a large white wicker basket that she carried with her spare hand.

Melania did a little bit of everything, including using a garden trowel to dig up the earth and plant new vegetables. 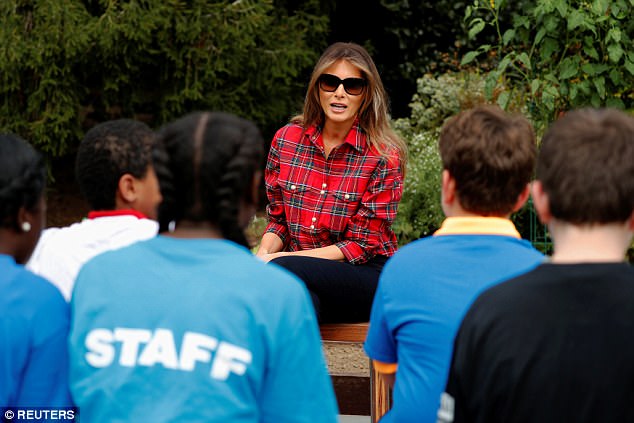 Before they got started, Melania sat down and talked to the students 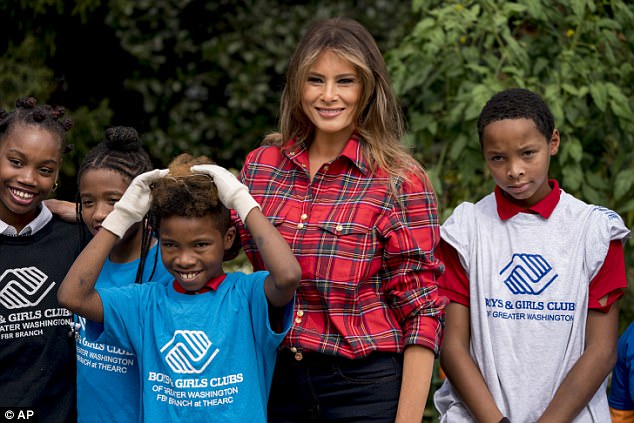 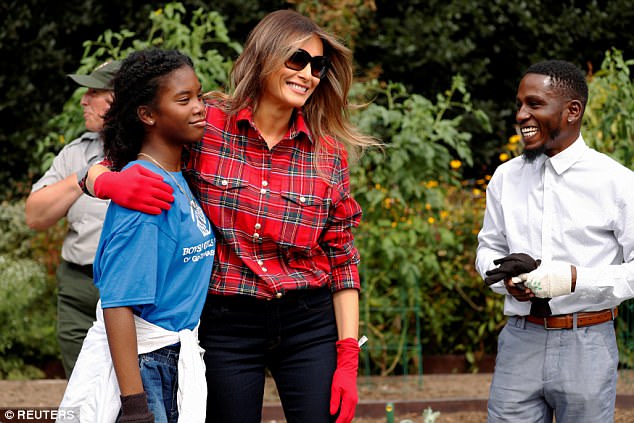 At one point, Melania threw her arm around one girl and flashed a bright smile

After she was done, she used a watering can to water the new plants.

As first lady, Melania seems to be happiest when working with children, and Friday was no exception.

She had a bright smile on her face as she posed with the students, and at one point she threw her arm around one girl’s shoulders.

It’s Melania’s first event in the garden that Michelle Obama had made a key part of her ‘Let’s Move!’ campaign to fight childhood obesity and promote healthy eating.

The former first lady said last year she hoped the garden would symbolize a healthier nation and that future first families would also cherish it.