The 50-year-old cut a stylish figure in a $2,195 skirt suit by Michael Kors as she stood by her husband’s side in the Blue Room at the signing ceremony marking the 100th anniversary of the ratification of the 19th Amendment.

But instead of wearing head-to-toe white, she made the look entirely her own by accessorizing her outfit with a black and white gingham belt that cinched her waist and matching pumps.

Celebration: First Lady Melania Trump, 50, donned suffragette white on Tuesday at a White House event marking the 100th anniversary of the ratification of the 19th Amendment 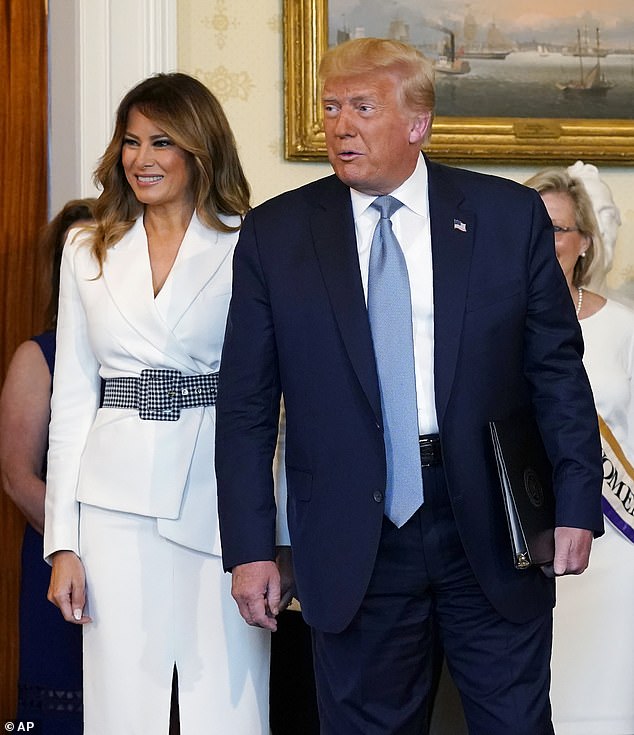 All smiles: Melania was joined by her husband, President Donald Trump, at the signing ceremony that took place in the Blue Room

Melania’s highlighted brown hair was styled loosely around her shoulders, and she stuck with her signature makeup: dark, smokey eyeshadow and a pink lip.

The former model tends to let her outfit do the talking, and Tuesday’s event was no exception. She had on minimal jewelry aside from a diamond band that sparkled on her finger as she stood with her hands clasped.

Melania previously wore the outfit to greet French President Emmanuel Macron and his wife Brigitte at the White House in 2018 during their first state visit.

She made quite the fashion statement in the suit, which she paired with a white wide-brim hat by Hervé Pierre. 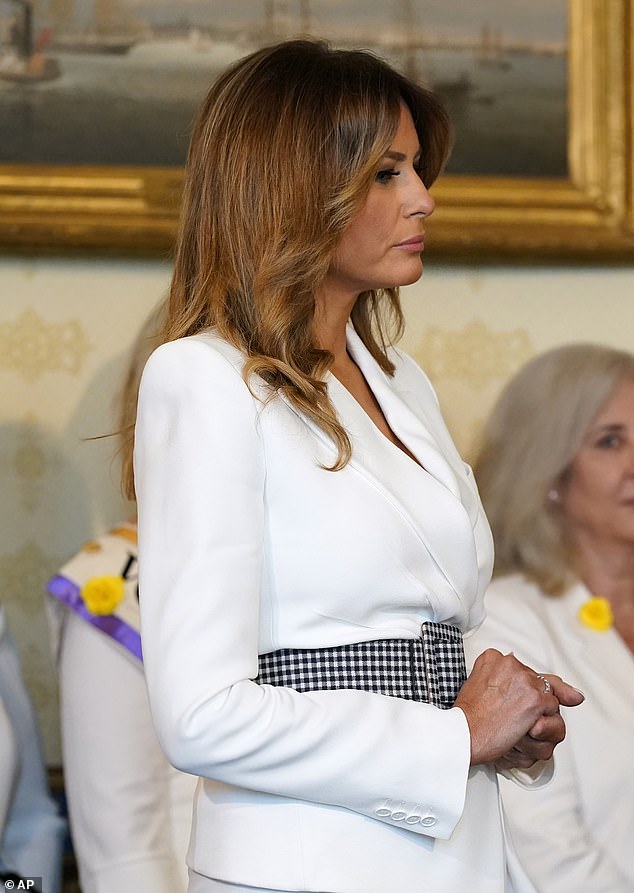 Outfit: She paid homage to suffragettes in a $2,195 white suit by Michael Kors that features a blazer with an asymmetric hem and a classic knee-length pencil skirt 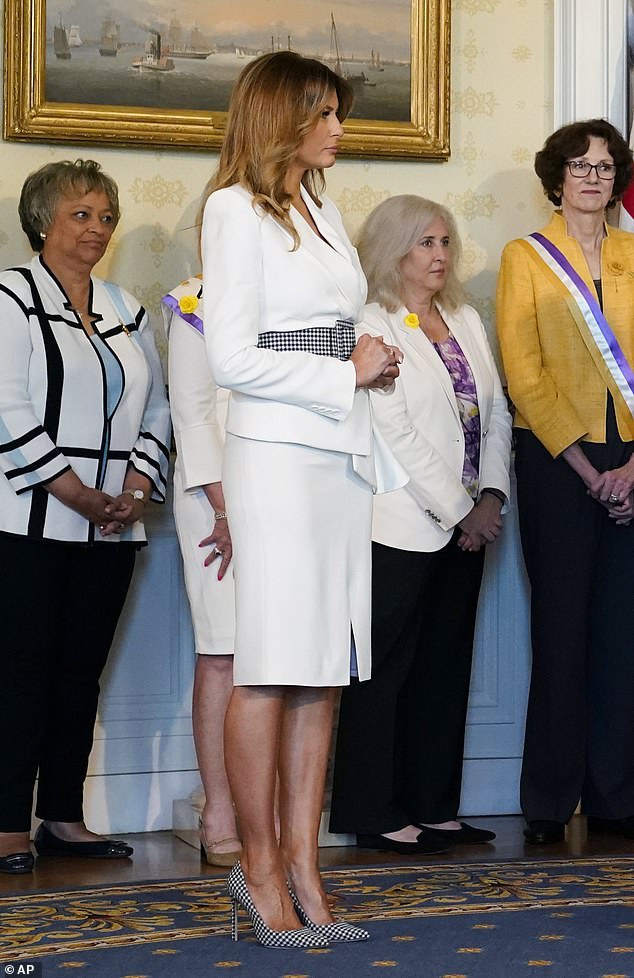 Added touches: Melania made the look entirely her own by accessorizing her outfit with a black and white gingham belt that cinched her waist and matching pumps.

The first lady gave the suit an update when she paired it with black and white gingham accessories for the White House event.

She joined other guests who stood by her husband’s side and clapped as he spoke at the centennial celebration.

President Trump, 74, announced on Tuesday that he will posthumously pardon Susan B. Anthony, a leader in the suffrage movement that gave women the right to vote.

The women’s rights activist was arrested for voting in 1872 at a time when only men were allowed to do so.

‘Later today, I will be signing a full and complete pardon for Susan B Anthony. She was never pardoned,’ he said at a White House ceremony marking the ratification of the 19th Amendment, which is also known as the Susan B. Anthony Amendment. 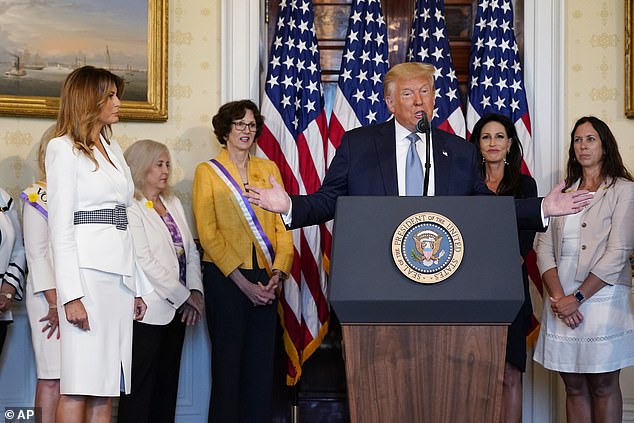 Duties: Melania stood by her husband’s side as he addressed the crowd, many of whom were also wearing white 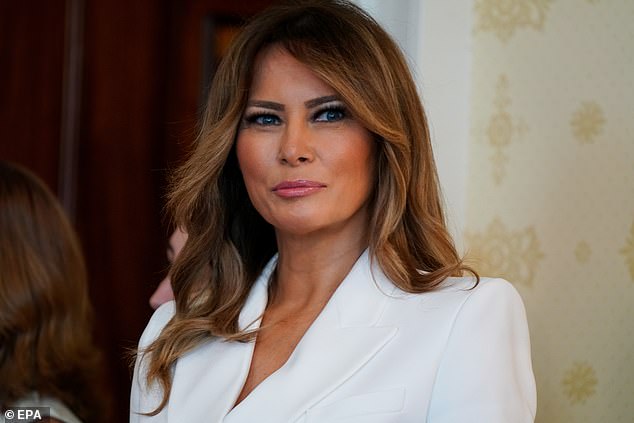 Go-to look: Melania’s highlighted brown hair was styled loosely around her shoulders, and she stuck with her signature makeup: dark, smokey eyeshadow and a pink lip

‘She got a bargain for a lot of other women, and she didn’t put her name on the list. So she was never pardoned for voting,’ Trump said.

The president had teased on Monday that he would pardon someone ‘very, very important’ the following day but would not say who it was — other than to rule out former National Security Adviser Michael Flynn and Edward Snowden.

His move comes as voting rights have become a central issue in the 2020 election.

Delays in mail delivery led the U.S. Postal Service to warn all 50 states that some mail-in ballots may not arrive in time to be counted.

Democrats have voiced concerns about voter disenfranchisement while President Trump has criticized mail-in voting as leading to election fraud despite numerous studies that state that is not the case. 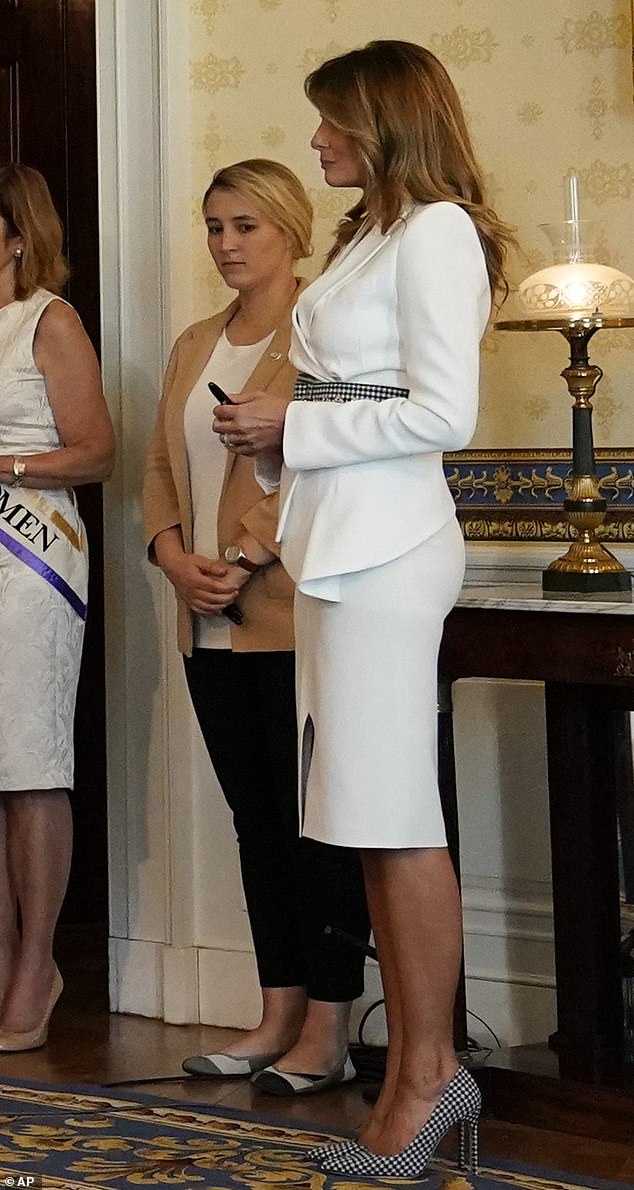 Repeat: Melania previously wore the suit to greet French President Emmanuel Macron and his wife Brigitte at the White House in 2018 during their first state visit 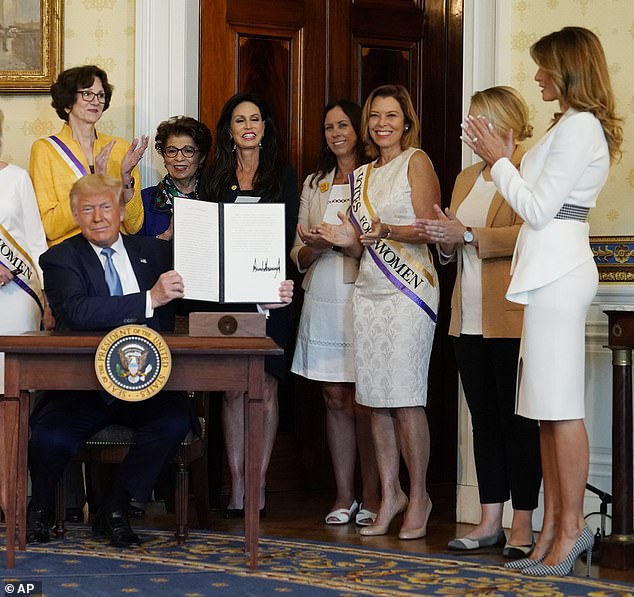 Modern look: The sleek suit features a modern blazer with peaked lapels and an asymmetric hem paired with a classic knee-length pencil skirt 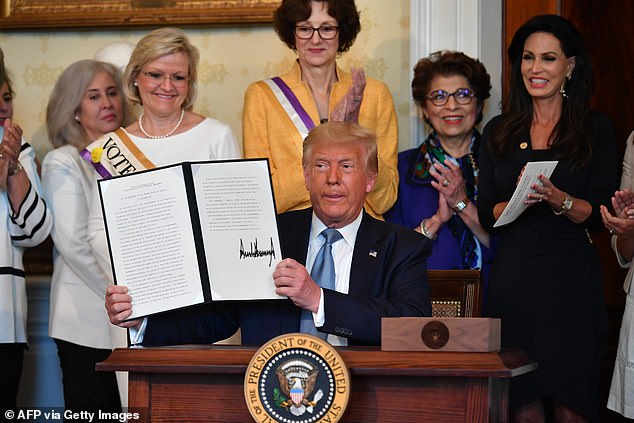 Surprise: President Trump announced at the event that he will posthumously pardon Susan B. Anthony, a leader in the women’s suffrage movement

Trump’s pardon also comes as Republicans have expressed concern the party is losing support of women voters, citing the low marks women gave the president for his handling of the coronavirus pandemic and race relations.

Anthony was arrested for voting in her hometown of Rochester, New York, in 1872 and convicted in a widely publicized trial of voting when only men were allowed that right. She refused to pay the $100 fine but authorities declined to take further action.

She is long known for her work in the women’s rights movement but she also supported the anti-alcohol temperance movement and fought for the freedom of slaves.

Her name has been co-oped by conservatives for the Susan B. Anthony foundation, a group that supports pro-life lawmakers.

Marjorie Dannenfelser, President of Susan B. Anthony List, was at Tuesday’s event at the White House.

But there is dispute among scholars and historians regarding Anthony’s position on abortion, and it’s difficult to ascertain it given it was a not a huge public issue during her time as a political activist. 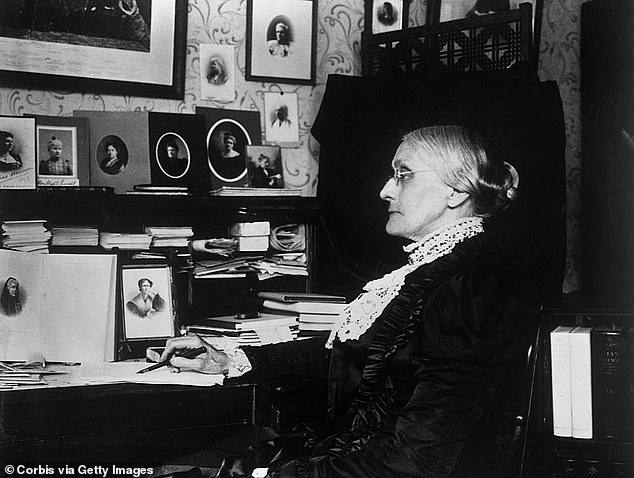 Hero: Anthony was president of the Woman Suffrage Association and campaigned for women to have the right to vote. She was arrested for illegally voting in 1872 when only men could 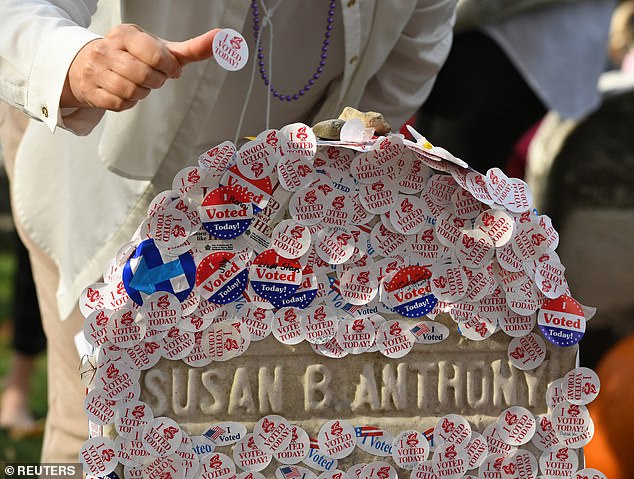 In 1869, Anthony and Elizabeth Cady Stanton founded the National Woman Suffrage Association as part of their battle to secure a woman’s right to vote.

Anthony gave as many as 100 speeches a year and traveled to numerous states to push for an amendment to be added to the constitution.

In honor of her work, the U.S. Treasury Department put Anthony’s portrait on dollar coins in 1979, making her the first woman to be so honored.

Visiting Anthony´s gravesite in Rochester on Election Day has become a popular ritual in recent years.

Thousands turned out in 2016 for the presidential match-up between Trump and Hillary Clinton. In 2016 and 2018, voters showed up by the dozens to put their ‘I Voted’ stickers on her headstone.