A babysitter who told a three-year-old ‘I will bash you’ before inflicting injuries that left the child with permanent disabilities has been jailed.

It’s unclear what exactly Xing Shen did to the boy she was babysitting with her partner Xi Zhang at the couple’s Docklands apartment in Melbourne in May 2019.

A cleaner overheard Shen telling the boy ‘I will bash you’, before hearing a loud bang in the couple’s bedroom and finding the boy facing the corner, unresponsive, as a punishment.

The boy suffered brain bleeding from that night and required surgery.

Shen, 25, on Wednesday faced Victoria’s County Court, where she was sentenced to a total of two years and three months in prison.

A couple left a three-year-old boy with permanent disabilities after babysitting him inside their Docklands, Melbourne home, Victoria’s County Court heard (stock image)

She must serve one year and nine months before being eligible for parole.

Her partner, Zhang, was sentenced to a total of two years in prison after he was found to have reached an ‘understanding or agreement’ with Shen that they would treat the boy roughly.

Judge Trevor Wraight said while the 23-year-old man did not physically harm the boy, he was ‘complicit’ in the offending due to this agreement.

Zhang must serve at least one year and six months before being eligible for parole.

The two Chinese nationals, who were living in Australia on student visas, pleaded guilty to negligently causing serious injury and will be deported after serving their sentences.

Court documents show Shen told a neighbour the boy had a ‘small accident’ and hit his head on a wall after ‘playing’ on Zhang’s shoulders before they took him to hospital.

He was at this point ‘shaking, convulsing and non-responsive’.

Shen repeated a similar story about an ‘accident’ to hospital staff and said bruises found on the boy’s body had occurred at child care.

He required resuscitation and brain surgery, with a paediatrician describing Shen’s accident story as ‘improbable if not impossible’ given the injuries sustained.

Later, Shen told a social worker she and Zhang had twice locked the boy outside on the balcony as punishment for ‘lying’. 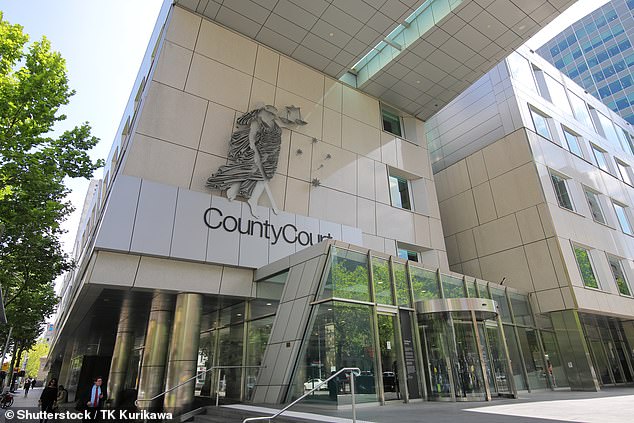 The boy, she said, kicked her in retaliation, leading her to push him off the couch into a wall, where a hole was found by police.

Court documents filed by defence lawyer Hayden Rattray said the boy kicked at Shen’s stomach and she feared this could harm her unborn child.

The lawyer told the court Shen had little to no experience in caring for children.

She had since given birth in custody, but the baby girl was taken away and is being cared for by relatives in China.

Shen had missed her daughter’s first words, Mr Rattray said, and had never been able to hold or feed her.

‘At a human level, it’s difficult to comprehend the hardship that must have befallen (Shen) in the days since she gave birth to her daughter,’ the lawyer said.

The pair have already served 734 days in custody.