Frustrated business owners are being ‘bombarded’ with shipments of dozens of fridges they didn’t order or pay for.

Supermarkets, a winery and even a salad bar have received dozens of free refrigerators as part of the Victorian Energy Upgrade Program.

The program gives homes and businesses access to providers selling ‘energy-efficient products’ to replace ageing or the least cost-effective appliances.

Installers can then claim profitable carbon credits for delivering the fridges to businesses.

Victoria’s Essential Services Commission has responded to the bungle by suspending carbon credits for installers of the energy-efficient appliances.

Supermarkets, a winery and a salad bar have been gifted dozens of free refrigerators as part of the Victorian Energy Upgrade Program (pictured, a fridge from one of the deliveries)

Business owners say dozens of fridges are being dumped outside their shops while others complain of being harassed over phone and email by contractors.

Brandon La Manna from La Manna and Sons told 3AW radio host Neil Mitchell up to 40 fridges had been delivered across his four businesses, with more on the way.

The owner of the green grocer chain fears that additional fridges will end up in landfill and said he plans to donate the appliances to charity.

‘To our knowledge it’s a carbon offset that the big energy companies are doing, they’re giving these fridges out to people to meet the offset,’ he said.

‘There was a bloke we had never heard of, never met, saying that he had free fridges and we thought to ourselves this must be a scam, but before you know it they just kept rocking up.’

Mr La Manna said he had naturally taken the fridges as they needed them and because they were free, but that it ‘didn’t make much sense at all’.

The business owner said 11 fridges had been delivered in three weeks and that he had initially registered his interest after receiving an email.

‘A couple turned up, then they just kept turning up,’ Mr Payten said. 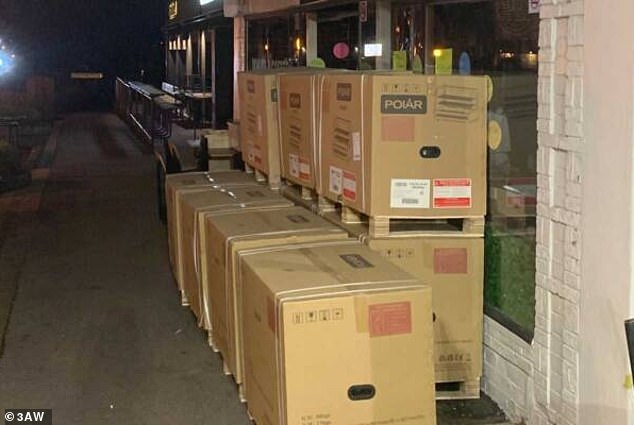 Frustrated business owners are being ‘bombarded’ with shipments of dozens of fridges that they didn’t order or pay for (pictured, fridges delivered to a Melbourne wine bar last week)

‘We’ve put about four of them to use, the other ones are just sitting there, and we’re trying to figure out what to do with them.’

He said he was worried the government would ask for the appliances back in a ‘massive stuff up’, so had stored them away just in case.

He estimated the cost of each commercial fridge was about $1,000.

Frankie, the owner of a salad bar in inner-city Melbourne, said she had been ‘bombarded’ by contractors trying to offload some of the fridges.

‘It makes absolutely no sense to us that they’re trying to offset carbon by using more energy and putting more equipment into these spaces,’ she told 3AW.

Victoria’s Essential Services Commission last week said they were aware of the issue and warned the behaviour is ‘completely unacceptable’.

‘We are aware of instances of large numbers of refrigerated cabinets being dumped on the street or provided to customers who don’t want them,’ a statement read.

‘Businesses accredited under the Victorian Energy Upgrades program are on notice that we will not tolerate this behaviour.

Victoria’s Essential Services Commission last week said they were aware of the issue and warned the behaviour is ‘completely unacceptable’ (pictured, one of the fridges)

‘We will not be progressing the registration of Victorian energy efficiency certificates for multiple installations of refrigerated cabinets while we investigate this behaviour as an urgent priority.’

Opposition leader Matthew Guy blamed the state government for the stuff-up and said it had ‘failed to manage’ the energy scheme.

‘How the hell could you get to a situation where cafes have been given 40 fridges – it’s ridiculous …. and the taxpayer is footing the bill for it, no wonder the state’s economy is in crisis,’ he told the Herald Sun.

The commission has said the dumping of appliances on public thoroughfares ‘must stop’ and that the relevant authorities would be alerted.

Members of the public, businesses or program participants have been urged to contact the Essential Services commission with any information.