A Melbourne cop with form for thuggery has escaped with a fine after bashing a teenage boy with his baton.

Florian Hilgart, 43, who resigned from Victoria Police in disgrace earlier this year, was caught on film in January 2018 flogging his young victim in full view of the public.

The rogue cop would be caught on camera again just months later – this time punishing a disability pensioner in a crime that also landed him in court.

Florian Hilgart, 43, flogs his young victim as he cowers on the ground 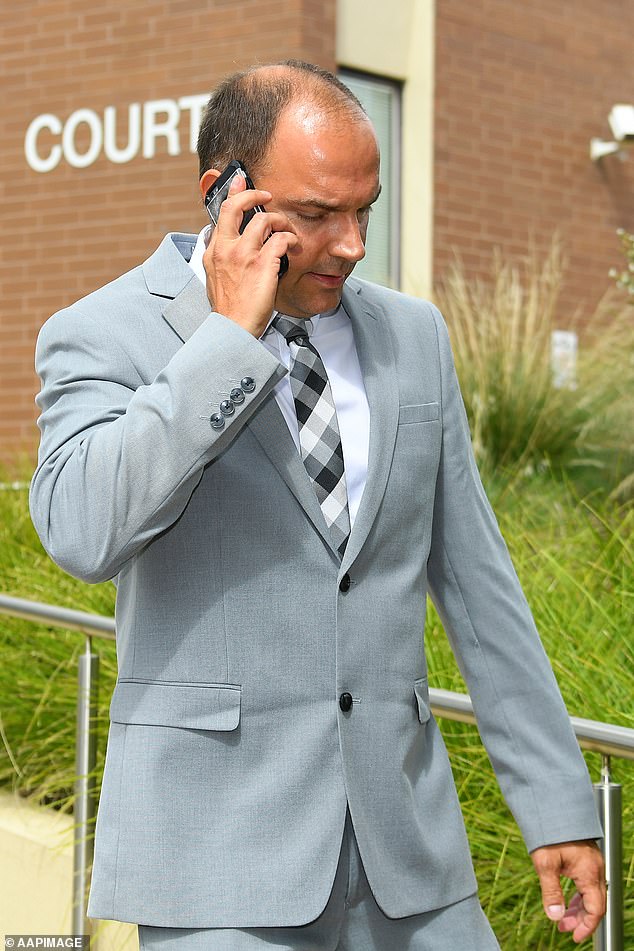 Florian Hilgart, 43, was referred to as ‘Baldy’ by his young victim, who identified him through his chrome dome 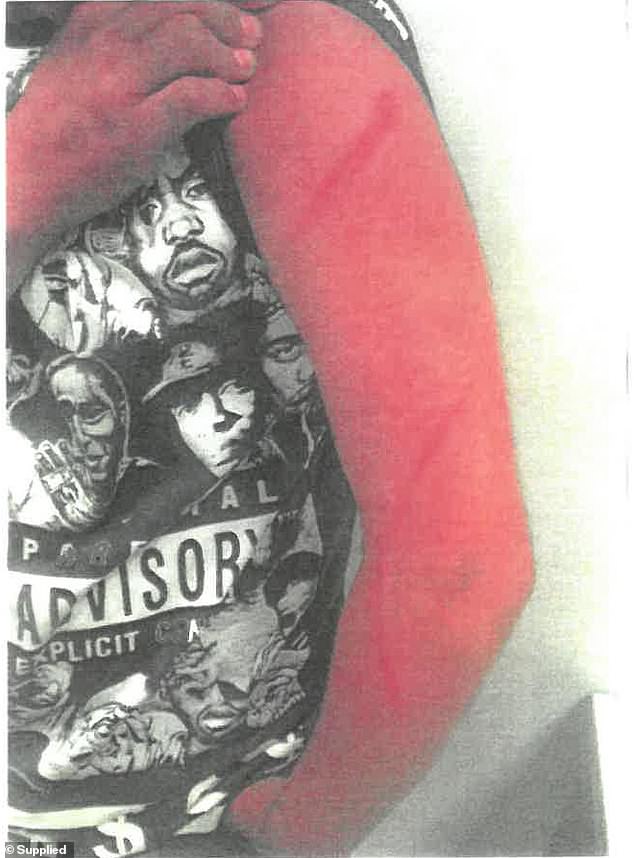 Hilgart avoided conviction in July last year over that sickening attack, which saw him spray a power hose in the face of his victim after going to the man’s house to check on his welfare.

On Friday, the Melbourne Magistrates’ Court heard the cowardly brute had beaten the 15-year old child as he lay cowering in the middle of a busy road.

The boy and his mate had been spotted earlier driving in Thornbury – just north of Melbourne’s CBD – in a car Hilgart believed to be sporting stolen number plates.

The court was played dashcam footage of the boys tearing through the streets before they appeared to struggle with the gears and came to a halt.

The boys could be heard shouting in fear as Hilgart smashed his way into the vehicle.

A passer-by captured the moment Hilgart tore the boy from the driver’s seat as his mate escaped out the rear and ran for it.

The young driver could be seen putting his hands up and falling to the ground as Hilgart approached and administered a powerful beating on his compliant detainee.

The dodgy cop, who was then an acting sergeant, would later file a report stating the boy had only complied after he was beaten with his nightstick.

The teen would tell police he had been bashed by a ‘baldy’ police officer – in reference to Hilgart’s chrome dome.

An internal investigation was launched, which found the victim had been compliant when Hilgart struck him with the baton multiple times.

Hilgart pleaded guilty on Tuesday to aggravated assault with a weapon over the attack.

In sentencing the bully in blue, Magistrate Pauline Spencer condemned Hilgart for his breach of the public trust.

‘It is the misuse of power in this type of everyday policing that undermines community trust in the police,’ she said.

‘There’s no doubt that police have a very difficult job. Like many incidents you and your colleagues face on a daily basis the driving in the lead-up to this assault was extremely dangerous.’ 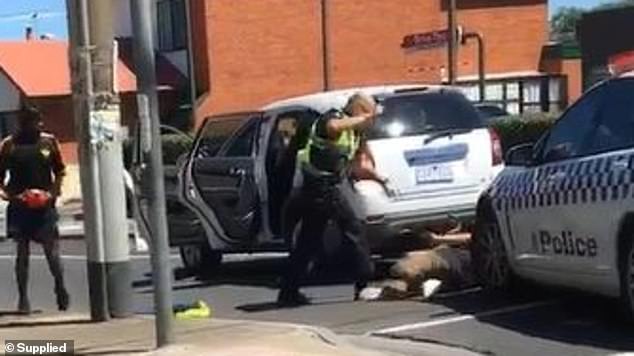 Caught in the act: Florian Hilgart, 43, administers his own brand of justice on a teenager 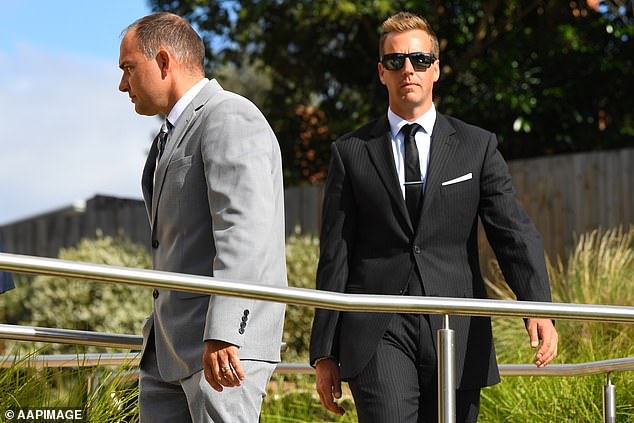 Hilgart’s lawyer Jason Gullaci said his client had been ‘doing the best he could’ in difficult circumstances, making evaluative judgments under time and stress pressure.

‘He has made errors of judgment which have resulted in him being charged,’ he said.

Ms Spencer convicted and fined Hilgart $10,000 and set him free.

Hilgart had been fortunate last year to escape conviction over his ruthless attack on a vulnerable Victorian.

He had been one of three officers to escape conviction over the September 2018 attack on the disability pensioner.

Hilgart had claimed he was providing ‘after care’ on the man after he police mates had capsicum sprayed him in the face during the welfare check.

Footage of the terrifying attack shocked Victorians, who had been enduring heavy-handed police bullying during their second Covid-19 lockdown.

An appeal court found the victim in that attack was clearly distressed, not consenting and that it had been done ‘for no purpose other than the entertainment or humorous enjoyment of (another officer)’.

The disability pensioner was treated ‘like a dog’ when police beat him with a baton, punched him and pepper-sprayed him. 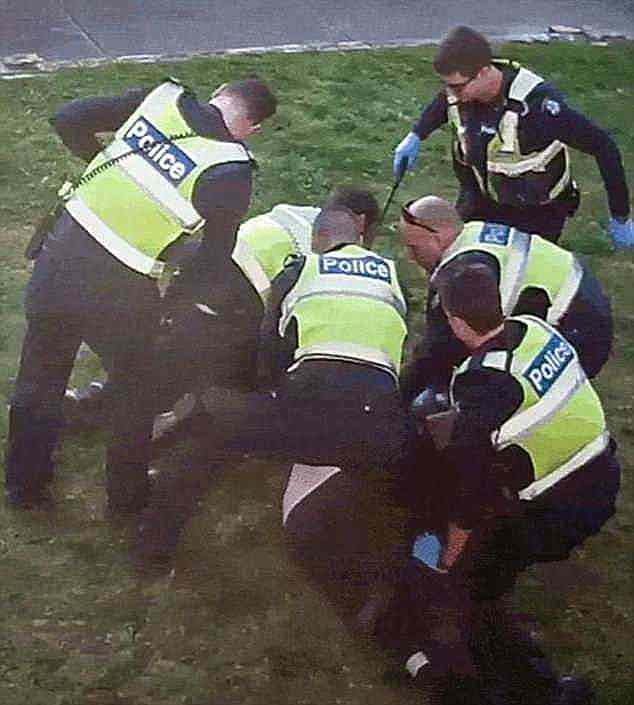 A group of officers were filmed gathering around a disability pensioner named John after he was pepper sprayed. Senior Constables Brad McLeod and Florian Hilgart, and Constable John Edney were found guilty of unlawful assault during the arrest in September 2018 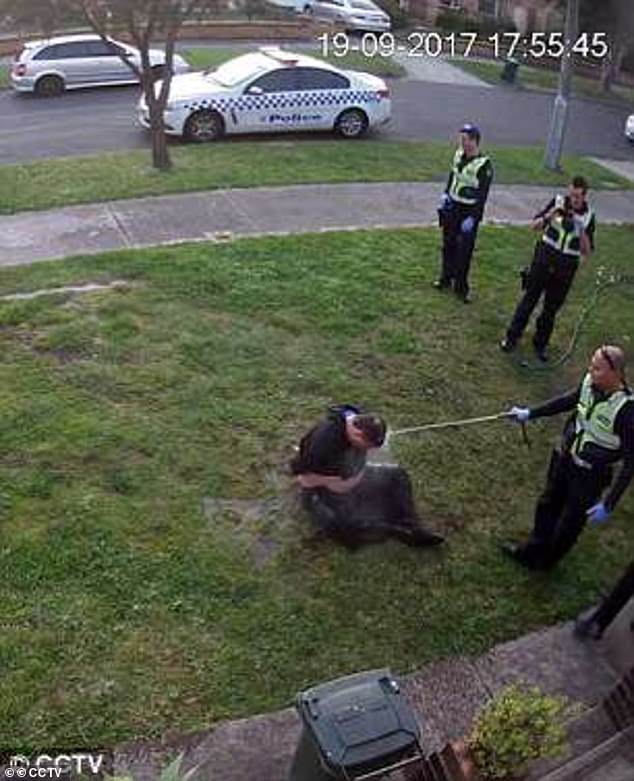 McLeod was also found guilty of directing his colleague Hilgart (far right), 42, to spray John with a high-pressure hose while he was handcuffed

The trio had been called to the pensioner’s Preston home after his psychologist called triple zero because of serious concerns about his mental health.

‘They treated me like a dog at the weakest moment of my life,’ the pensioner, named John, told Heidelberg Magistrates Court last year.

The attack was caught on two CCTV cameras at John’s home and he said the officers refused to acknowledge their behaviour despite being caught ‘red-handed’.

He originally installed the cameras in a bid to prevent crime at his property.

The disability pensioner was haunted by what happened on the day and deserved ‘dignity and humanity’.

He also unlawfully stepped on the pensioner’s head.

McLeod, 35, pepper-sprayed the victim and punched him in the stomach.

Hilgart was fined $1,000 for spraying John with the hose, while Edney also copped a $1,000 fine for stepping on the victim’s head and hitting him six times with a baton. 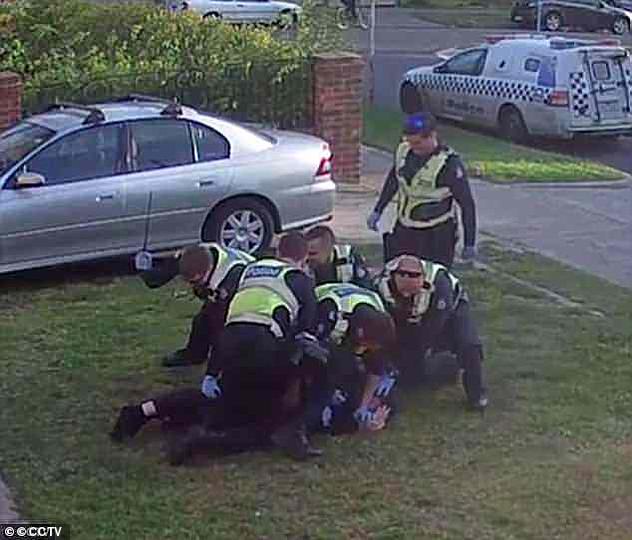 A total of six officers arrived to arrest the disability pensioner 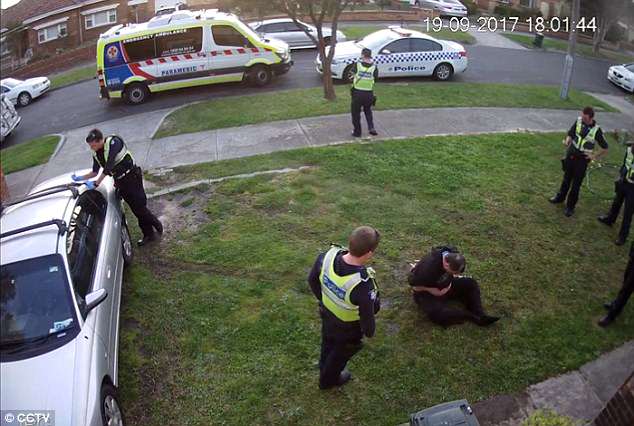 John sits on the lawn, shaken by the assault.